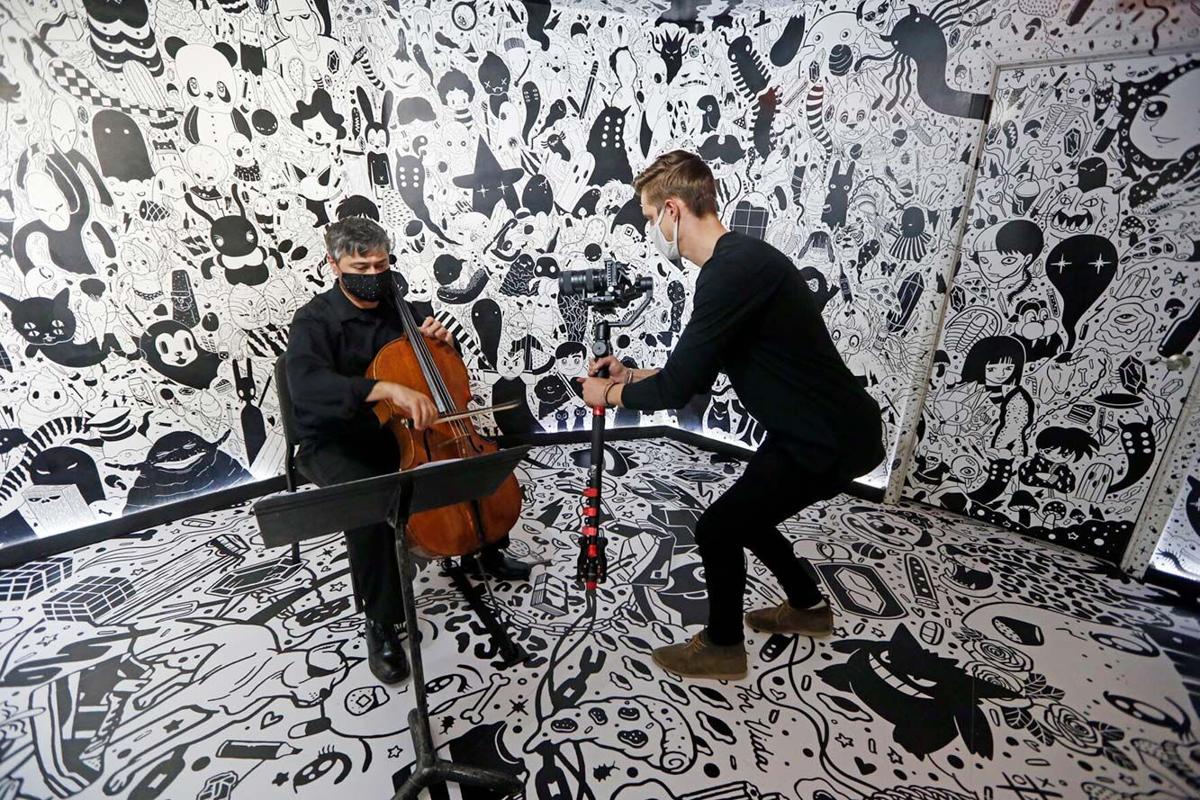 McCall Sides (left) of Hutton Broadcasting, films James Holland, cellist with the Santa Fe Symphony, during the filming of a virtual concert at Meow Wolf 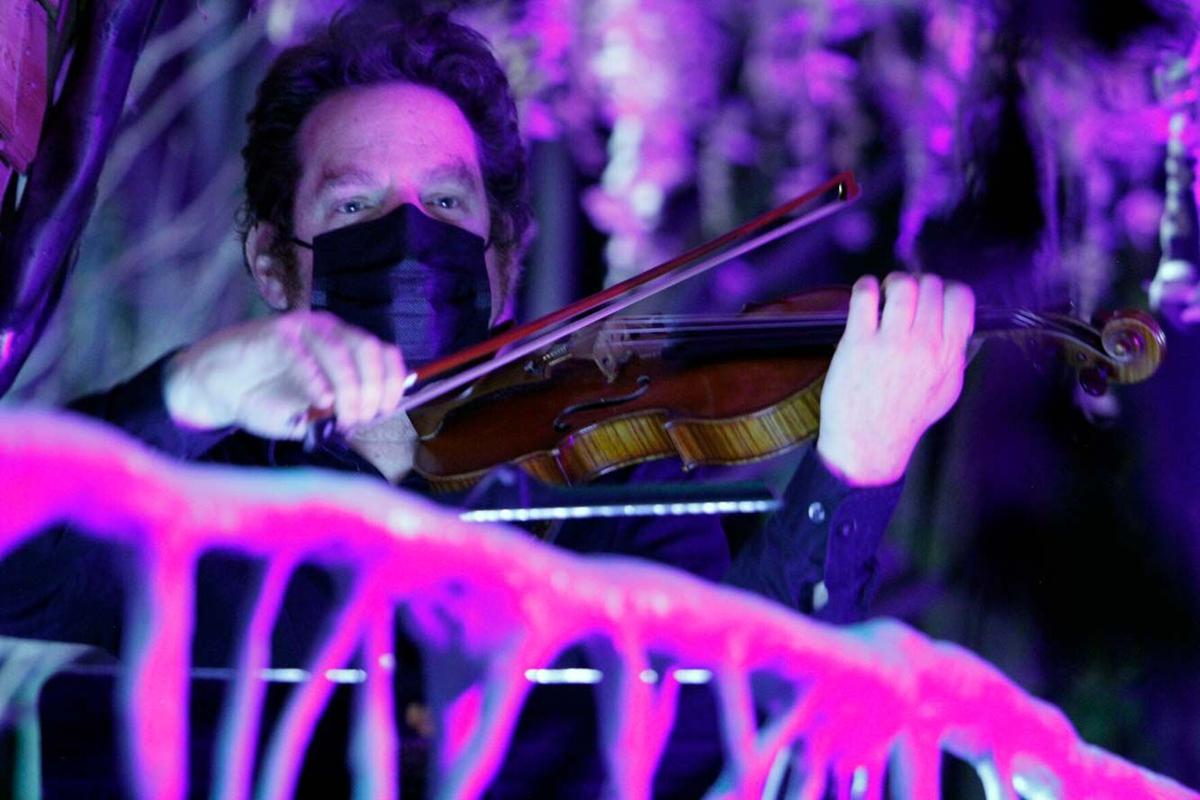 David Felberg, concertmaster violinist for the Santa Fe Symphony, at the filming of a virtual concert at Meow Wolf 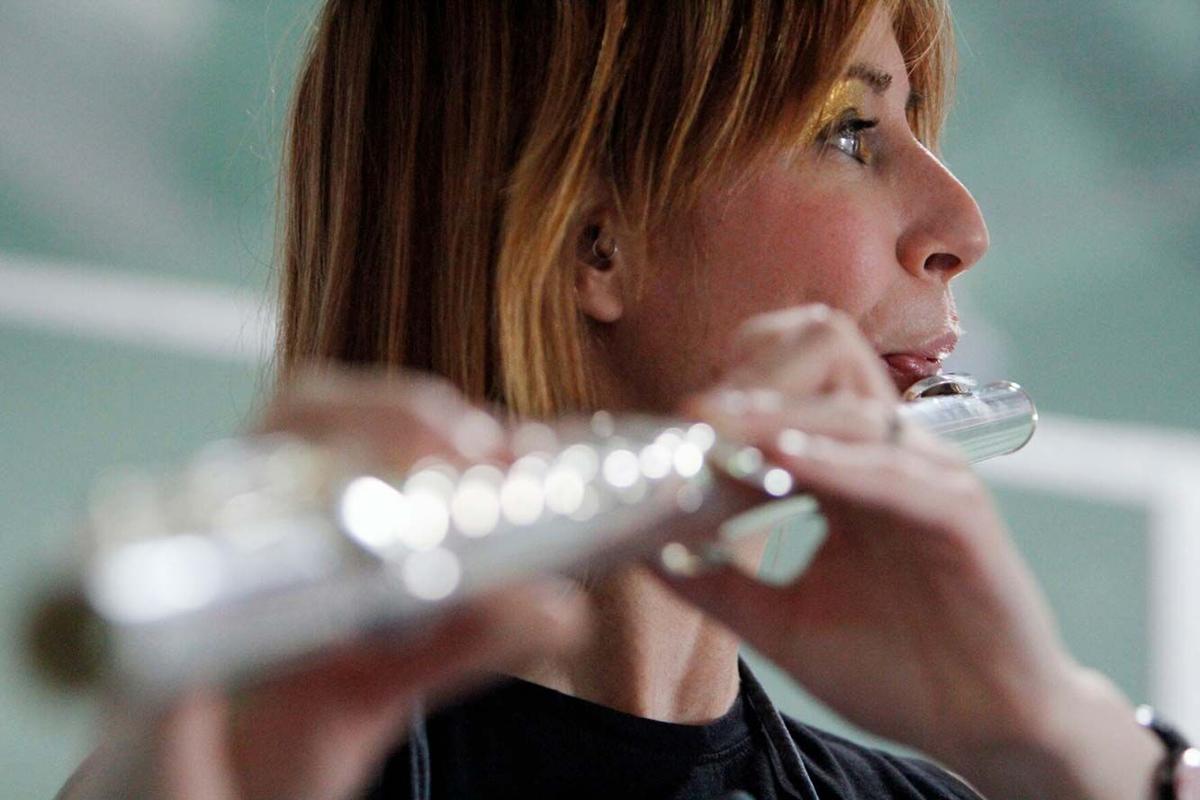 Jesse Tatum, principal flute with the Santa Fe Symphony, warms up before the filming of a virtual concert at Meow Wolf 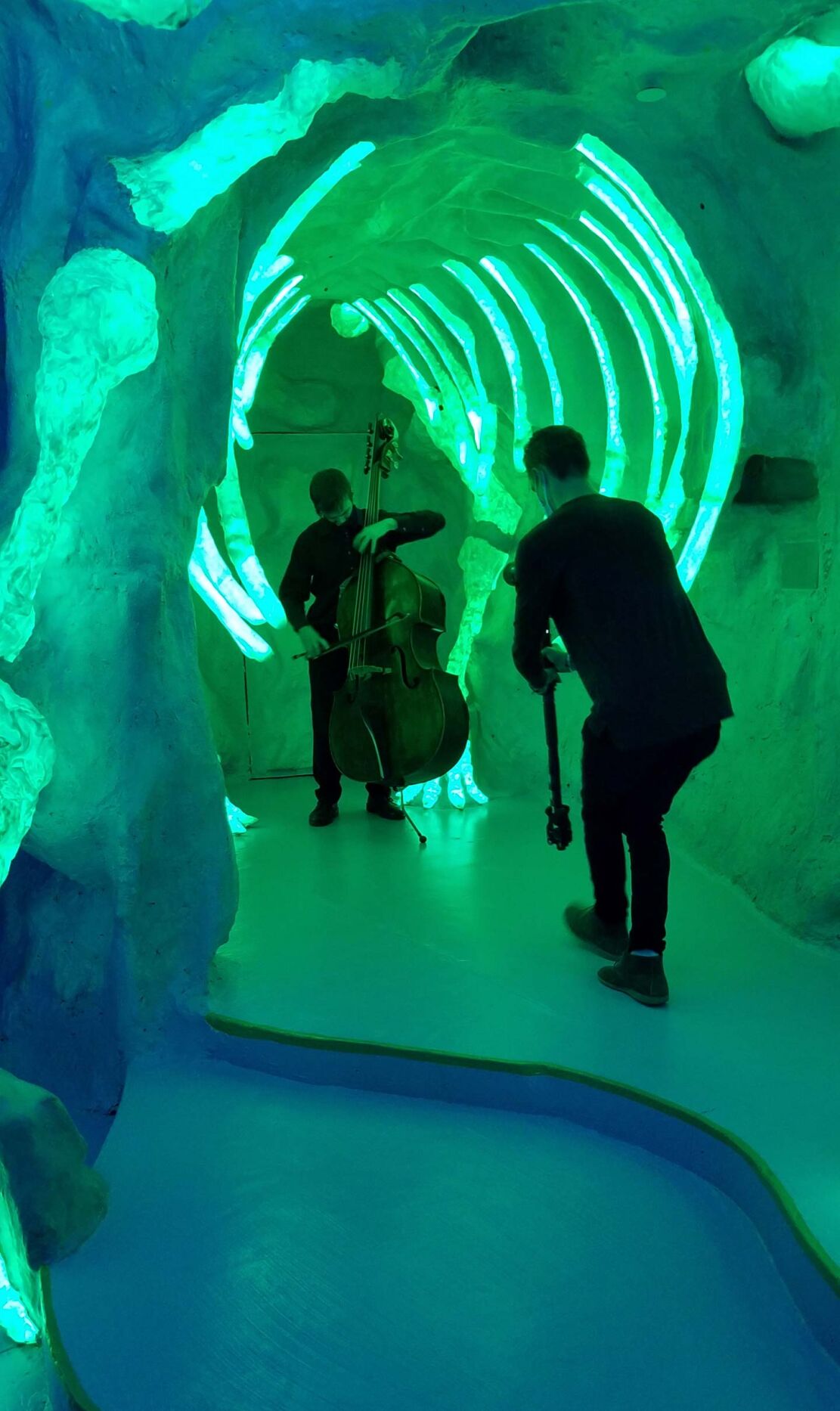 McCall Sides (left) of Hutton Broadcasting, films James Holland, cellist with the Santa Fe Symphony, during the filming of a virtual concert at Meow Wolf

David Felberg, concertmaster violinist for the Santa Fe Symphony, at the filming of a virtual concert at Meow Wolf

Jesse Tatum, principal flute with the Santa Fe Symphony, warms up before the filming of a virtual concert at Meow Wolf

It’s March 6, and preparations were underway for Meow Wolf’s reopening on Friday, March 19. (The doors have been closed since March 2020.) Under stark ceiling lights, the labyrinthine spaces had little of their usual magic or mystery. Except for the Mastodon Cave, where the eerie installation lighting dimly revealed what seemed to be a humanoid the beast had swallowed just before dying — and one that was still in remarkably good condition.

On closer inspection, it was Toby Vigneau, the Santa Fe Symphony’s 18-year-old bass player, waiting to start a videotaping session for the first of the group’s next series of virtual concerts. (Yes, he’ll be playing in there.) Five are slated for the spring, and they’ll be a major component in future seasons as well, SFS Executive Director Daniel Crupi told Pasatiempo in a recent interview.

Crupi could be forgiven for thinking that he’s been the victim of some bait-and-switch scheme. Instead of overseeing long-planned concerts at the Lensic Performing Arts Center where repertory is the only big variable, he and his colleagues have been scouting outdoor and indoor shooting locations, scheduling audio and video recording sessions, and investigating options for streaming content platforms since June.

The first is Music of the Universe, 11 pieces of chamber music filmed in nine different spaces within Meow Wolf, which premieres on Sunday, March 21. Given the venue, it’s not surprising that the program tilts toward the contemporary. Living composers outnumber the dead, and six of the works were composed in the 21st century. Three of the modern pieces come from vintage names — Philip Glass, Steve Reich, and Krzysztof Penderecki — and three from a younger cadre — Marcos Balter, Missy Mazzoli, and Catherine Shaw, who are 46, 40, and 39, respectively.

The repertory mix reflects new thinking on the symphony’s part. “The higher profile for composers from historically underrepresented groups is an important aspect of our future, and it’s also a choice we’re very excited about from an artistic quality standpoint,” says Stefanie Przybylska, principal bassoon and chair of the musician steering committee. “We’ve found so many wonderful pieces, such as a wind quintet by Louis Ballard, who’s considered the father of Native American classical composers. We circulated a recording, and everybody was knocked out by it.”

Two of the most intriguing contemporary works involve live soloist plus electronics. Reich’s Vermont Counterpoint (1982) features a live flutist plus 10 more on tape. It’s a beguiling composition that’s played here by Jesse Tatum, who says of it, “The sonic world of the flute is weird enough, but 11 at once? It’s overwhelming — in the best possible way, of course. I especially like the 1980s quality of the piece: relentless, optimistic, and forward-facing. It pairs really well with the futuristic Portals at Meow Wolf, where we filmed it.”

Concertmaster David Felberg plays Vespers for Solo Violin and Electronics, a 2014 piece by Missy Mazzoli. She’s best known for her opera Breaking the Waves, which has received several American and European stagings since its 2016 premiere by Opera Philadelphia. In her program notes, Mazzoli explained the work’s provenance: “I sampled [digitally copied] keyboards, vintage organs, voices, and strings from an earlier composition, drenched them in delay and distortion, and re-worked them into a piece that can be performed by a soloist.”

There’s even a revelation among the Baroque works on the bill. Two excerpts are from well-known pieces ( J.S. Bach’s Cello Suite No. 6 and George Phillip Telemann’s Paris Quartet No. 6) but the third isn’t — Benedetto Marcello’s Sonata No. 1 for Tuba and Harpsichord. This duo may seem the strangest of bedfellows, but hearing it during the Feb. 28 recording session, as played by Richard Antoine White and Luke Gullickson, proved their compatibility. In White’s hands, the tuba is extremely agile, and the piece gives him a chance to display his skill in florid music and some surprisingly high notes, with the harpsichord’s twangy tonality a perfect yin-yang complement.

Yes, you saw the words “recording session.” “We pre-record audio when the indoor acoustics or outdoor environment aren’t ideal,” Crupi explained. “We want to give our audiences the kind of sound quality they expect from the Santa Fe Symphony and sometimes pre-recording is the only way to achieve it.” In practical terms, it means the symphony’s offerings are more like a music video or feature film involving classical music. Audio and video can be fine-tuned apart from each other, unlike what happens in pointing cameras at a concert performance.

For many viewers of the symphony’s fall concerts, the quality of the visuals was the most welcome surprise. The scenic venues, including Ghost Ranch and gardens at the Santa Fe Children’s Museum, helped greatly, as did Hutton Broadcasting’s videography. (Most of us think of Hutton as a set of radio stations, but it also has a significant video operation.)

At Meow Wolf on March 6, the crew consisted of Hutton’s director of video content, Scott Hussion, two camera operators, and Elisa B. Hutton. As bassist Vigneau played the Bach cello suite in the Mastodon Cave, one camera operator shot primarily through an aperture in the beast’s side, capturing profile shots of Vigneau, while the other moved in and out of the mastodon’s mouth for close-ups and experimented with unusual camera angles.

Symphony board president Mike Dawson sees the virtual programming as reflecting priorities identified in a 2018 strategic plan. “We wanted to better differentiate ourselves in a crowded local market, to utilize new technology in attracting a larger patron base, to develop a regional presence in addition to our local one, and establish collaborations with other organizations,” he recently told Pasatiempo. “Our virtual series hits each of those targets.”

The audience statistics and economics around digital performances offer mixed messages. It has definitely broadened audiences geographically — 30 percent of the symphony’s fall season patrons were from outside New Mexico and 29 percent of instate viewers were from outside Santa Fe. Like most performing arts groups, much more of the symphony’s income comes from contributions than from ticket sales. The trend so far is for digital programming to increase the number of donors, but at substantially lower gift amounts.

There’s also a big trade-off for ticket income. A couple attending a Santa Fe Symphony concert during the 2019-2020 season paid an average of $97 for its tickets. One year later, the same couple spent $20 to view an online concert. The real question, which can’t be answered for some time, is whether digital programming has substantially increased the number of classical music patrons and their willingness to make contributions, as well as buy low-priced tickets? Or does it simply reflect a static audience spending more time online because it has more time available and fewer activities competing for it?

Meanwhile, the symphony is the only Santa Fe classical music producer embracing digital performance in a substantive manner, at least to date. “We’re already investing financially in a hybrid future,” Crupi says. “We intend to augment our traditional live programming, not to replace any of it.” The current thinking for the 2021-2022 season is to offer a streaming option for two concerts at the Lensic and for three online-only events filmed in non-traditional locations.

The group has smartly consolidated its online offerings on a new platform called Santa Fe Symphony TV, which brings together education programs, and free performances, along with its pay-to-view content. ◀

Music of the Universe

Music of the Universe

Museum of International Folk Art and the New Mexico Museum

The School for Advanced Research

Music of the Universe will be available free of charge; the remaining concerts are $20 per household. Details and tickets at santafesymphony.org. — M.T.