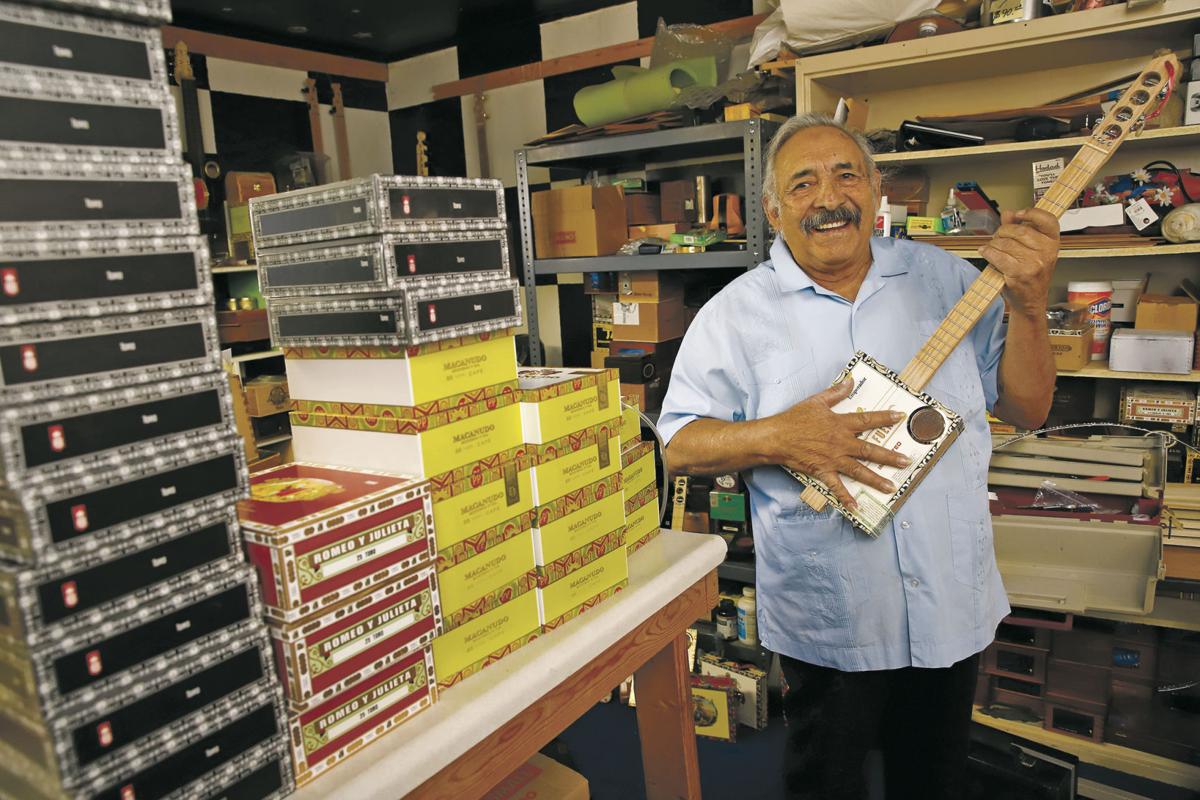 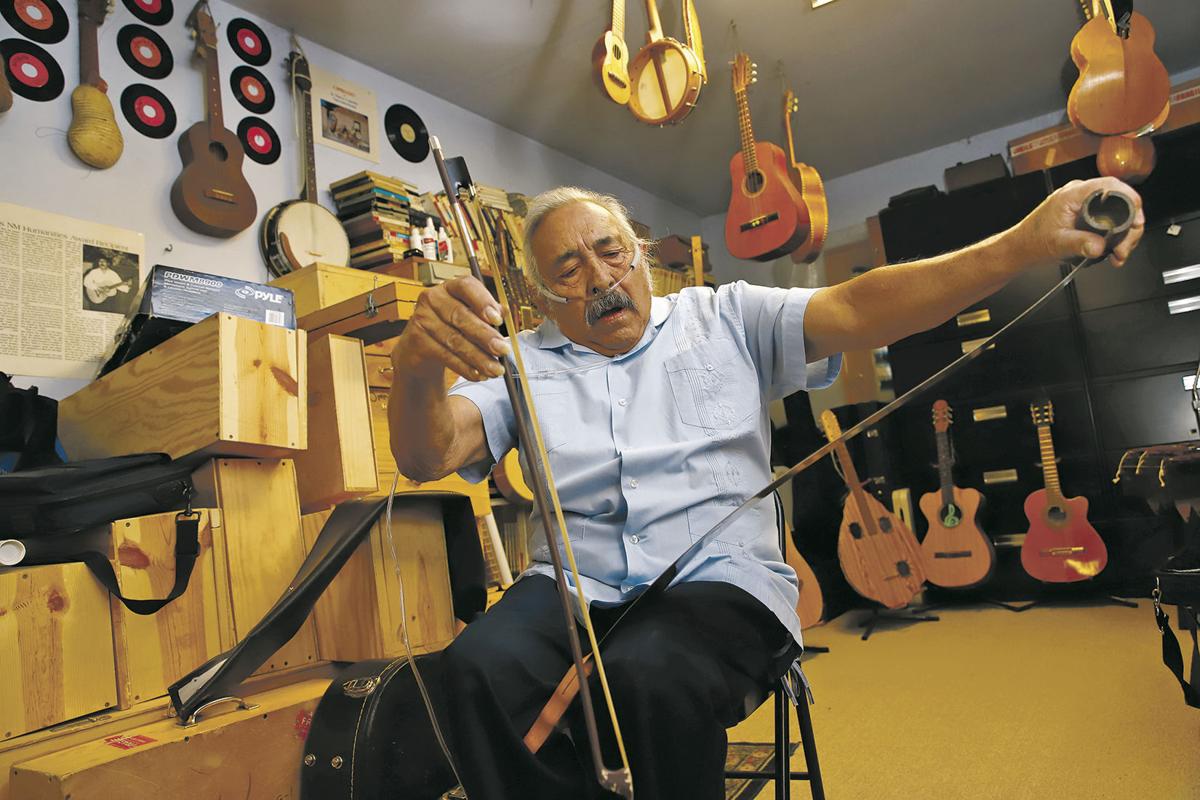 Walk in the front door of Cipriano Vigil’s El Rito home, and it pretty much looks like any other. A small set of stairs straight ahead leads to a sunny kitchen, a wood stove is aglow in the center of the living room, and plastic organizers full of his wife’s jewelry-making beads and tools sit on a couch. But wander deeper, and you’ll stumble into the heart of this musician’s world.

In a small back room that serves as the legendary ethnomusicologist’s studio, cigar boxes are piled as high as his head. Wooden necks, miscellaneous guitar parts, and tools fill the space around a large work table, and natural light floods in from windows with views of the Tusas Mountains. Vigil’s homemade instruments, each a distinct (and playable) piece of art, hang in rows along each wall. Turn too quickly, and you may take down one of the guitars waiting to head to a local school.

And there’s more. Another room stores bags of wood pellets for the stove as well as more cigar-box guitars (both acoustic and electric, with matching battery-powered cigar-box amps), which he sells — mostly by word of mouth. Yet another room houses hundreds of instruments, some made with his own hands and others collected from around the world. He plays them all. Banjos, violins, mandolins, a xylophone, a tin-tub bass, African steel drums, a Tibetan violin, a flute made from PVC pipe, and dozens of guitars made from various materials (including armadillos and tortoise shells) rest on stands, dangle from the ceiling, or are tucked inside cases and boxes. Stacks of cassettes, CDs, and records contain priceless musical gems — hundreds of field recordings Vigil collected, as well albums of his own compositions.

“There have been times when even our bedroom is full of guitars,” his wife, Susana Vigil, says of the house they’ve shared since 1988. “We had to make room for the bed.”

Music in his DNA

In his 300-instrument room, Vigil, 78, pulls out a handmade guitar from an old case. As he’s done at least a dozen times this November afternoon, he pulls the instrument toward him and begins to strum. You can’t help but notice that his right-hand nails are long and perfectly sculpted for finger-picking (the first time he went into a nail salon in Española, “the woman looked at me like I was crazy,” he says). He begins to sing a slow Spanish verse. It’s not a Top-10 hit. It’s a song he used to hear when family and friends gathered at the resolanas, the sunny side of a house, to play music.

Even as a little boy in the village of Chamisal in Taos County, Vigil was desperate to learn guitar. His father was a self-taught violinist and guitarist who played cowboy songs and made cigar-box violins. His grandmother “would play this really tiny harmonica,” he recalls. “She’d be making tortillas and playing harmonica at the same time, and I used to be afraid that she would swallow it. So it runs in the family, from my grandmother and father to me.”

When he was about 6 years old, his father asked him to make sure the family’s cows didn’t eat any wild alfalfa. But he would get lost in the world of music, fashioning two-hole flutes and other small instruments from pieces of wood and playing them in the fields. He once got so distracted that he forgot about the herd entirely, and one cow got sick from eating alfalfa and had to be killed.

At least his family got some good steak out of it, he says, laughing and picking up a violin to play a jaunty indita — music derived from the blending of European and indigenous American cultures.

“When I was about 7 or 8 years old, my love for music was so great, but I didn’t have nobody to teach me, so I would run away from home at night when there was a dance going on,” he says. He began sneaking out his window to record, on a little pad of paper, the finger placements of musicians at local dances. Then he’d return home and teach himself on a $9 guitar his older sister (one of seven siblings) had bought him. “That’s how I taught myself to play — by looking at other people and listening on the radio … mostly Spanish music that was coming in from Mexico.”

By the time he was a teen, he began to make a name for himself by playing shows throughout the region. He went on to teach himself mandolin, then violin, and continued to discover and learn more exotic instruments. But when a fan presented him with sheet music after a show and asked him to play it for her, he realized he had one weakness: He couldn’t read music. Then and there, he decided to learn, which led the high-school dropout to get his GED and go on to earn a bachelor’s degree in music education, master’s degrees in bilingual education and ethnomusicology, and, while teaching at Northern New Mexico College, a doctorate in ethnomusicology.

In the ensuing years, he performed several times at the Smithsonian Institute in Washington, D.C., and continued to play regularly throughout New Mexico — “even though I have to carry my ‘umbilical cord’ with me everywhere I go now,” he says, referring to the oxygen he needs to treat his COPD.

On Feb. 8, he and his family will make the five-hour drive to Las Cruces for a performance, and he’ll be onstage again Feb. 12 at the Museum of International Folk Art between weekly school visits and student recitals. He’s accomplished all of this with two ruptured eardrums, the result of slamming into water during a dive as a boy. “Sometimes when I’m performing, I can’t hear my son and daughter playing, so I have to hope that we’re in tune.”

Between stories, he pulls one of his electric cigar-box guitars from the wall and demonstrates a short, finger-picked melody before putting the instrument down with the others. Like every moment, it’s another opportunity to make music.

Armed with only a small cassette recorder, Vigil set out to collect recordings of traditional Spanish music throughout the state in the early 1960s. His thirst for music was so profound that he would go door to door, asking if there were any musicians in the house. He would hit bars and dances and arrange to meet people, finding old songs that dated back hundreds of years and learning to play them. He didn’t realize at the time that others would be interested in the rare music he’d found or that one day his research would be compiled in a book, New Mexican Folk Music: Treasures of a People, published by UNM Press in 2014.

“I started doing it for my own enjoyment,” he says, “but then I had a collection of all this stuff. These people are gone, but I captured them.”

Other scholars, including Jack Loeffler and John Donald Robb, have collected extensive field recordings of folk music in this region. “What distinguishes him is he also performs the entire collection,” says Enrique R. Lamadrid, a literary folklorist, professor emeritus, and distinguished professor of Spanish at the University of New Mexico. “He’s the performer collector. That’s what makes him interesting.”

“I had this weakness — my wife hated it — where we’d be walking down the street and all of a sudden, if there was a music store, I’d disappear and she wouldn’t know where I went,” he says. “I was mesmerized by different instruments and wanted to learn as many as I could. And I did. And some of my students are doing that themselves now.”

While in Baltimore for a performance at the Walters Art Museum, he spotted a small instrument made from an albino armadillo at a pawn shop. When he asked how much it cost, the owner said it wasn’t for sale but added, “If you know how to play it, I’ll sell it to you.”

To the amazement of the store owner, Vigil learned right there on the spot, and he took it home with him. “And then I made one myself.”

A gift for generations

Vigil has passed down his knowledge to his son, daughter, and grandchildren, all of whom perform with him. He’s also taught students — for 15 years at some 75 elementary and high schools throughout the state — how to build and play cigar-box guitars, which they can then take home. He spends at least four hours preparing each instrument (his brother and grandson help a little), measuring each fret to ensure it plays in tune, then cutting each fret by hand and installing them. “It has to be perfect,” he explains. “If I dent it, it’s ruined. It’s a very slow process.” He sometimes stays up until 2 a.m., banging away in his studio.

This semester, he has prepped about 100 guitar kits for schools in Española and Chimayo. By passing down the historical music, as well as the tradition of DIY instrument building, Vigil has served as a bridge between his ancestral heritage and future generations.

“His cigar-box guitar-making workshops are the stuff of legend and have impacted the lives of thousands of New Mexico children,” says Thomas Goodrich, administrator of the New Mexico Music Commission. In 2019, the commission awarded Vigil a Platinum Music Award for lifetime achievement.

Last semester, Vigil regularly traveled from his home to Gallina and Lybrook to lead cigar-box guitar workshops. He also takes his eccentric instrument collection on tour around the state to give show-and-tell (and play) presentations at schools; he explains their history and origin, and also performs. He says he doesn’t make much money teaching, especially considering the expense of cigar-box guitar materials, but if he can interest even one student in each class to take up music — something positive, rather than something that could lead down darker paths — he’s done his job. “That’s my payment.”