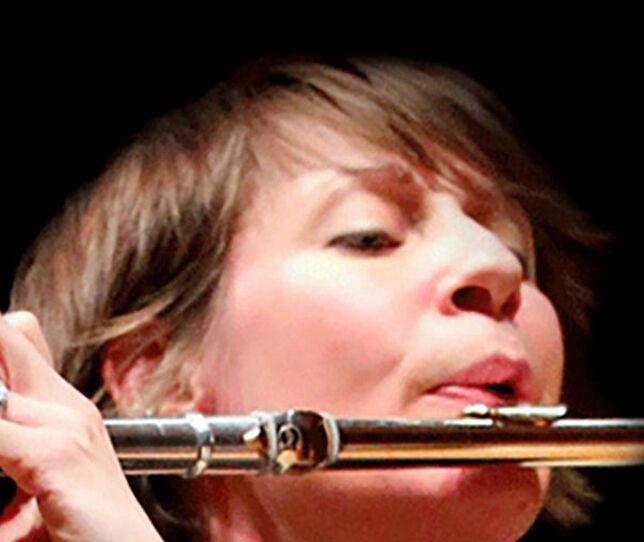 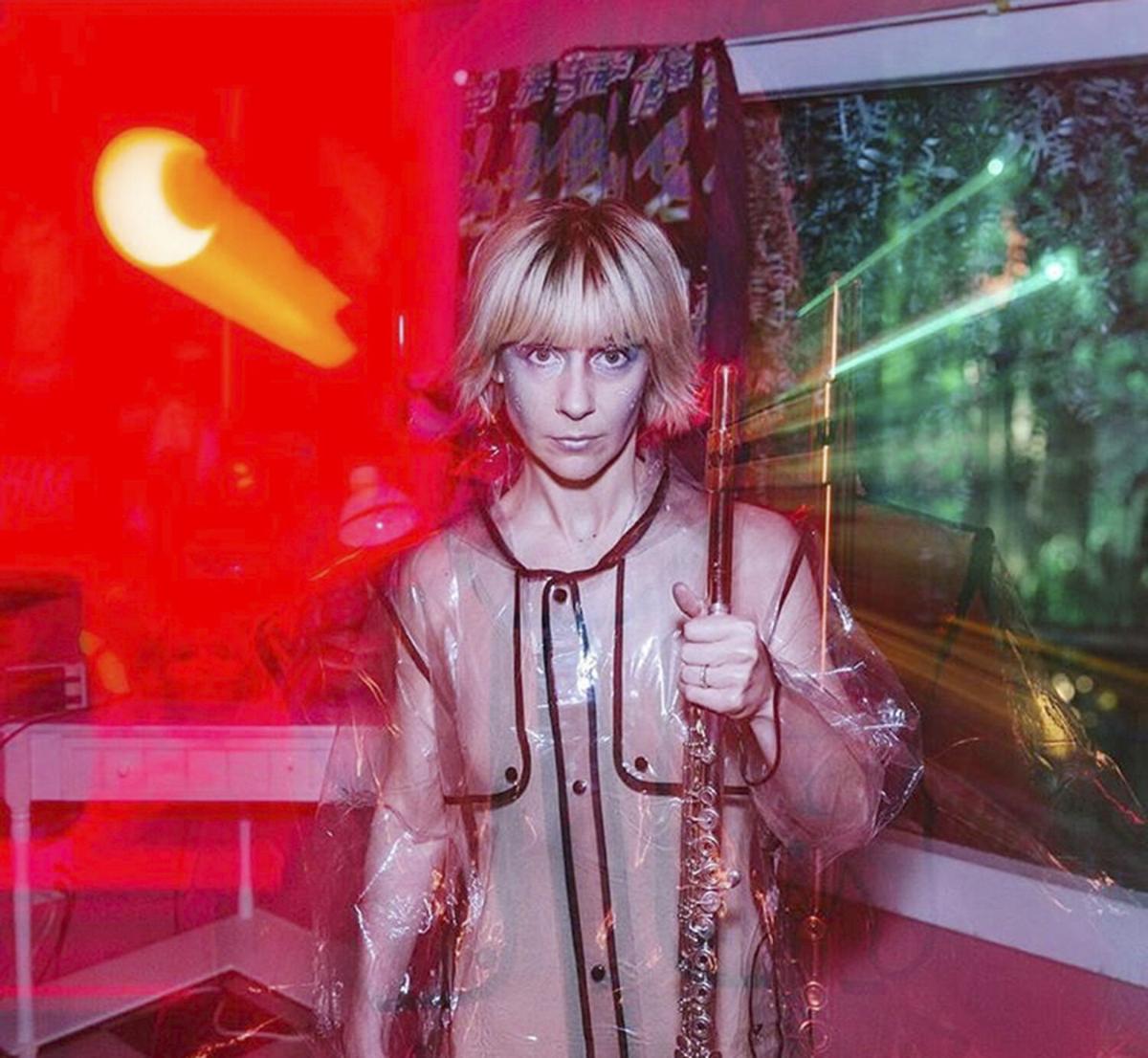 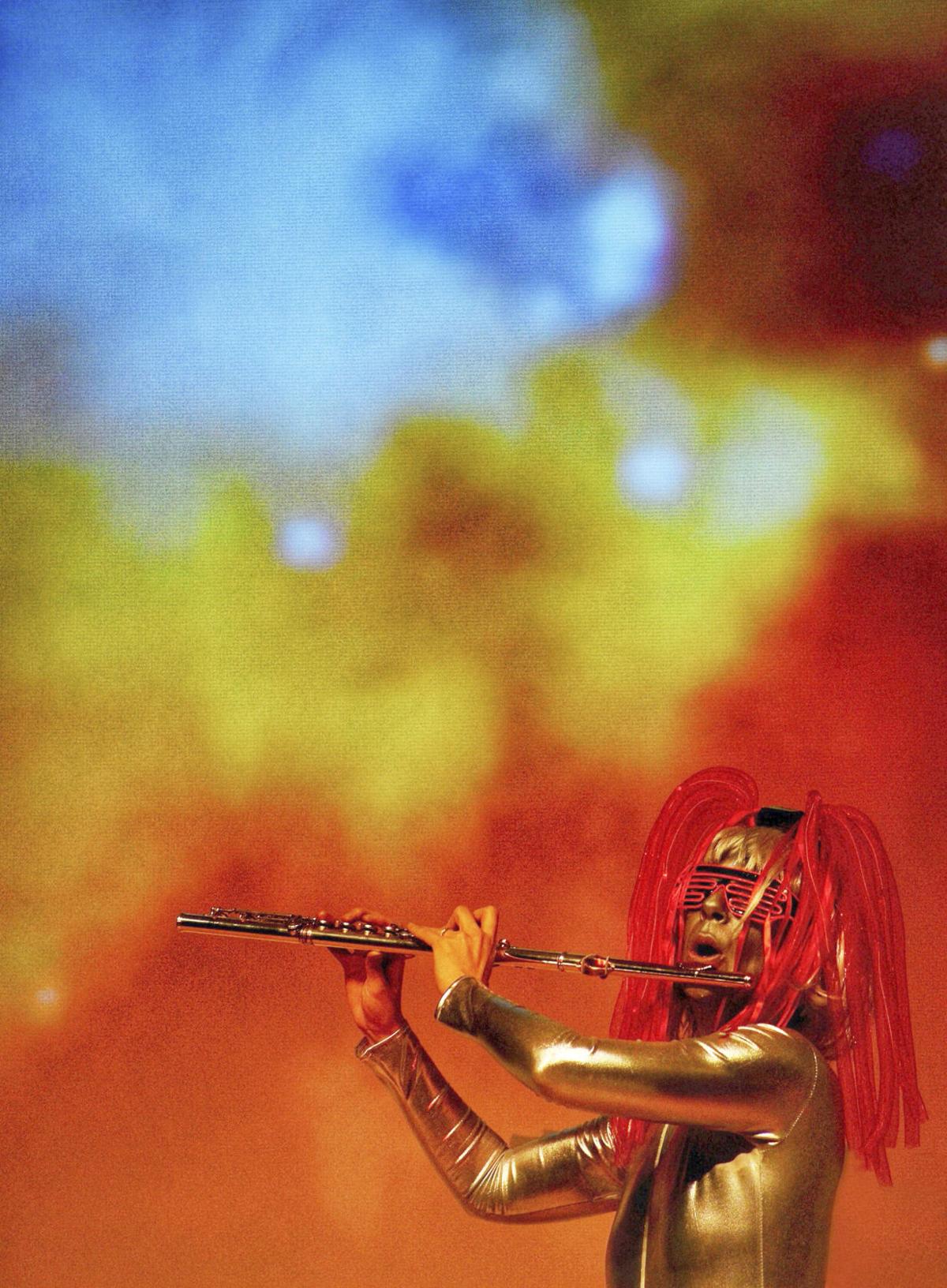 There are a lot of Jesse Tatums around these days. One is the Santa Fe Symphony’s principal flute, one is a licensed clinical social worker in Albuquerque, and one is a performance artist who appears as Stardust Supernova at Meow Wolf and other funky venues.

Funny thing is, they all have the same home address and Social Security number. And no matter which Jesse Tatum you speak with, each will assure you it’s not what used to be known as multiple personality disorder. In fact, it’s the opposite.

“It feels very authentic,” she says. “I feel like I’m living my best life, even though a lot of people say to me, ‘Why can’t you just focus on something?’ Everything I do is about ‘both/and’ rather than ‘either/or.’ It has to do with the satisfaction that comes from connecting — connecting with my audiences, or other musicians, or my clients — where I’m the conduit to finding a common humanity. It’s shepherding people through the present moment and honoring their feelings, no matter what they are.”

Tatum grew up outside Portland, Oregon, in a non-musical family. She wanted to play the cello and the trumpet, but her parents nixed those notions in favor of the flute, figuring the learning process would be easier on their ears. She started in the sixth grade and took to it quickly, soon joining the Portland Youth Philharmonic, the oldest youth orchestra in the country, and one of the best.

“I was wild, very wild,” she says of her high school years. “I was in an International Baccalaureate program but was also a crazy, artistic type. Plus, I had this other life on the side where I got to know all the really fun things.” (There’s a definite “wink wink, nudge nudge” in her voice on that last statement.)

After high school, she pursued an undergraduate degree in flute performance at the San Francisco Conservatory of Music. While living in the Bay Area, she developed a love of food, which is still her primary interest outside of her paying gigs. She also tried out another persona there, so focused and well organized that her nickname was “Hermione,” after the uptight but charming Hermione Granger of the Harry Potter books and films. “I’m a double Virgo,” Tatum says, “so I pay a lot of attention to details.”

Her move to New Mexico came at the recommendation of Timothy Day, her college flute teacher. “For graduate school, I knew I wanted someplace where I could get a full scholarship,” she says, “and that would be a good place to land in terms of what would happen with the rest of my life, a cool place to be creative. Tim suggested I study with Valerie Potter at the University of New Mexico.”

Tatum finished her first master’s degree (in music) in 2003 and almost immediately began performing with the New Mexico Symphony Orchestra. A few years later, she also joined the Santa Fe Symphony as second flute, moving up to the principal chair in 2008. The orchestral composers whose flute music she most enjoys playing include Antonín Dvořák (“He doesn’t get nearly as much credit as he should for his writing and orchestrations,” she says), Ottorino Respighi, and Gustav Mahler.

Her playing with the symphony has often been praised in these pages, and the group’s principal conductor, Guillermo Figueroa, is a big fan. “Jesse is an incredibly engaging artist, a breath of fresh air and inspiration,” he says. “Her challenging and questioning mind seems to be bursting with new ideas, always searching for new music, and always finding ways to make familiar music sound new. It’s a privilege to have her as a collaborator.”

As is common with just about all New Mexico musicians, Tatum has always had a day job to earn a living. At first, it was working with an advertising agency as a client advocate, but she decided to choose an option more closely aligned to her interests and values. With this in mind, Tatum pursued a second master’s degree (social work) from New Mexico Highlands University, and graduated in 2011.

Tatum’s interest in performance art goes back to her student days in San Francisco, but it really took off after she started working with Meow Wolf, where she says she has given at least 150 performances since the summer of 2017.

She almost canceled her evening audition there, which followed a morning chamber music performance, an early afternoon rehearsal, and a late afternoon opera performance, but a friend drove her up from Albuquerque. “I played some just-composed music for them, which kind of blew their minds,” she said. “Then they asked if I would be willing to wear a costume, and I said, Boy, Howdy! That’s me!

“I grew in massive ways as a result. I could wear a spacesuit and perform in what they call Silver Avenue and play music that reflected what was happening in the room. It was great to learn how to be with people who didn’t necessarily ask for what they were getting.”

Jesse Tatum is the enemy of pretentiousness, says Tara Khozein, Meow Wolf’s former performance content director. “As Stardust Supernova, Jesse wore a transparent raincoat over her nude body stocking and strode through the exhibition space playing the most contemporary, virtuosic music for solo flute in the repertoire in a visually spectacular way. It’s rare to see such a skilled player being so gorgeously funky, embodied, and comfortable in herself, and when people connected with Jesse’s obvious charm, they also connected to their own bodies and to the music.”

Tatum says her most memorable performance was with Chatter, the Albuquerque-based group she credits with changing her musical life, thanks to its focus on contemporary repertory. Aug. 23, 2018, was the debut of her character, FluTeBot, a flute-playing alien who had come to Earth searching for an oxygen source to save her planet. She had to travel back home suddenly, leaving artifacts around Albuquerque. When she finally returns to collect them, she agrees to perform for Chatter before leaving the Earth forever.

FluTeBot’s memorized program could easily have served as a doctoral student’s final recital, with challenging works by Claude Debussy, Salvatore Sciarrino, Kaija Saariaho, Edgard Varèse, Shirish Korde, and Toru Takemitsu. “I had no idea whether it would work,” says Tatum, “and thought maybe 20 people would show up. Instead, it was sold out and set a Chatter record for the number of curtain calls that still stands.”

The performance was in part a riff on the late photographer Patrick Nagatani’s Excavations: Buried Cars and Other Stories, an exhibit at the Albuquerque Museum at the time, in which Nagatani’s alter ego, a Japanese archeologist named Ryoichi, claimed to have discovered and partially unearthed cars buried near mysterious “power sites” around the world. Several were in New Mexico, including a Model A Ford found near the Very Large Array.

FluTeBot’s backstory is told through a 16-page photographic program booklet chronicling the discovery of artifacts used in the performance, including her flutes and red space travel boots. Her “possibly radioactive sunglasses,” for instance, were shown near the “Very Small Array” on Lomas Boulevard in downtown Albuquerque.

What’s next for Tatum? Her live performance opportunities have decreased for the time being, but her counseling practice is busier than ever. She’s also developing another performance art character, this time based on Pierrot, the unhappy clown of commedia dell’arte who woos the flirtatious Columbine, but usually loses her to the clever Harlequin. Pasatiempo readers can see and hear Tatum in performance online via the Lensic Performing Arts Center’s Ghost Light Sessions at lensic.org/lensic-online/ghost-light-sessions. More information about her can also be found at jessetatumflute.com. ◀