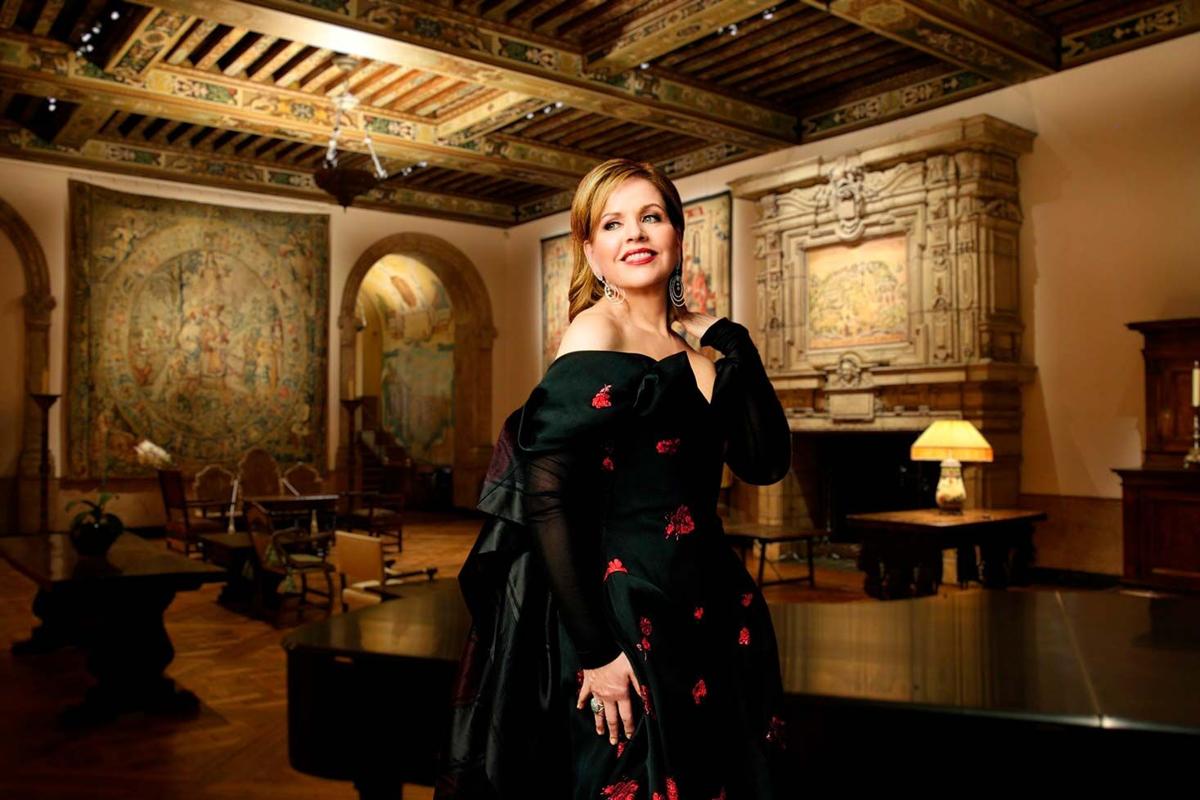 Renée Fleming in the music room at Dumbarton Oaks in Washington 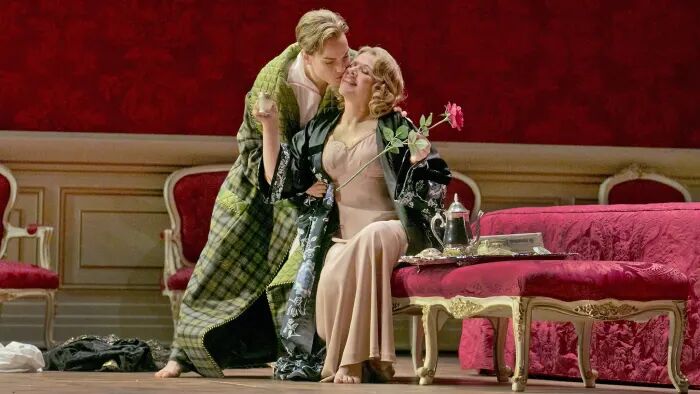 Renée Fleming in the music room at Dumbarton Oaks in Washington

It’s fair to say that Tampa Bay Buccaneers quarterback Tom Brady is the Renée Fleming of football. Both are masterful artists who have performed in front of millions of fans and have maintained consistently high levels of achievement over extended careers in often-unforgiving fields. There is one immediate difference, though. Brady won’t take the field again for months, while Fleming can be seen and heard nationally on Friday, March 19, when Renée Fleming in Concert airs on PBS KNME-HD 5.1.

It’s a well-constructed and beautifully sung program. When asked about her process in creating a solo recital, the soprano told Pasatiempo, “It’s the most arduous task there is for me, especially in recent years, a puzzle that’s more challenging and complex than you’d ever think. I want what I sing to have value for audiences and, as their tastes and interests change, I try to evolve as well.”

What hasn’t changed much is the beauty and warmth of Fleming’s lyric soprano voice. As most singers age, their range gets lower and their tone becomes harsher, but that’s not the case here. She sings many of the same roles she did two or three decades ago, with more interpretive insight and very little loss in aural appeal.

Fleming’s speaking voice is lower than you’d expect (think plushy mezzo-soprano), and her manner is friendly and direct. An eavesdropper on the call would be hard-pressed to detect any hint of a diva whatsoever. She seems to be (dare I say it?) engagingly ordinary. Fleming is widely known in the musical world for her equanimity and approachability; her college roommate told The New York Times in 2017, “Renée’s not just humble, she’s chronically humble.”

Her hour-long PBS program begins and ends quietly, unusual choices that seem exactly right for the times. The finale is Johannes Brahms’ Wiegenlied, Op. 49, No. 4, better known to us as his “Lullaby.” The opener is brand new and very au courant — John Corigliano’s “And the People Stayed Home,” a plaintive, a cappella setting of Kitty O’Meara’s poem about how the coronavirus has changed our lives.

In between are a dozen arias, songs, and oratorio solos, several of which will be delightful discoveries for most listeners. Georg Frideric Handel explored the same elegiac territory as Corigliano more than 250 years earlier in “Convey Me to Some Peaceful Shore” from his very-seldom-performed oratorio Alexander Balus. Fleming likes to program pieces on similar themes back-to-back, as she does here, illuminating how composers from different eras approached the topic.

An equally rare offering is one of Mimì’s arias from La Bohème. How can that be rare? It’s not Puccini’s Bohème but Ruggero Leoncavallo’s. “I LOVE that piece! It should be staged a lot more often,” Fleming said. Her selection here is Act I’s “Musette svaria sulla bocca viva,” an enchanting arietta in which Mimì introduces her friend Musette to the four Bohemians.

The role of the Marschallin in Richard Strauss’ Der Rosenkavalier has been a touchstone throughout Fleming’s career. She’s a still-young married woman having an affair with an even younger man, Octavian, while knowing that soon they must part. Fleming’s performance of the Act I monologue in which the Marschallin hopes that time will stop, at least temporarily, is the summit of the program.

Since she no longer performs the role onstage, this is a wonderful chance to enjoy what many consider her finest achievement. It’s clear that Fleming relishes singing the monologue in the more intimate setting of a recital, where every visual and vocal nuance of her interpretation can be savored by the audience. “When I first sang it, I got very emotional about being separated from Octavian,” Fleming said in describing how her approach has changed over time. “Now, I’m focused more on the loneliness the Marschallin foresees and the difficulty of finding her place in a changing world.”

Music by Erich Wolfgang Korngold is another Fleming specialty. Korngold shot to worldwide fame with his opera Die tote Stadt (The Dead City) in 1920, written when he was 23. Here, she sings the poignant, unpretentious letter aria from the first act of Die Kathrin, Korngold’s last stage work. (Its 1938 premiere in Vienna was canceled by the Nazis, due to Korngold’s Jewish heritage, prompting him to settle in Hollywood.) In the aria, the title character, a young German girl, bids adieu to her French soldier boyfriend on the eve of World War I, in a musical setting that has the emotional directness of Schubert’s lieder.

Lovers of art song will be pleased by two of Joseph Marie Canteloube’s Songs from the Auvergne and by Reynaldo Hahn’s “Si mes vers avaient des ailes,” composed at age 13. If you insist on something by Puccini, there’s the ever-popular “O mio babbino caro” from Gianni Schicchi, complete with beautifully floated high notes, as well as a Great American Songbook contribution in “Somewhere over the Rainbow.”

The concert was filmed in the music room at Dumbarton Oaks, a historic home in Washington D.C.’s Georgetown neighborhood. It’s billed as one of the “breathtaking venues” used in the series, but it’s more head-scratching than breathtaking; the room lighting is very low and all the artwork was removed from the walls for the event, leaving it a mélange of browns worthy of Santa Fe.

Fleming recently moved to the D.C. area, where she serves as artistic advisor to the John F. Kennedy Center for the Performing Arts. “I rode my bike to the Capitol two days after the Jan. 6 riot,” she said, “and was just stunned by what I saw there.” Less than two weeks later, she became part of the country’s opportunity to move forward, singing Franz Schubert’s Ave Maria and “America the Beautiful” for President-elect Biden and Vice President-elect Harris at the church service preceding their inauguration.

“Mr. Biden and Ms. Harris both came up to talk after the service, which was so lovely,” she said about the historic morning, “and I mentioned that I felt like I’d been under a siege that had finally been lifted. Then Mr. Biden started talking about the music that he and his late son Beau loved, and pretty soon we were both crying.”

Now, in hear early 60s, Renée’s not walking away from performing anytime soon, citing as her inspiration Judy Collins, Engelbert Humperdinck, The Rolling Stones, and Bruce Springsteen. Her wide-ranging musical interests include jazz and indie rock (she’s recorded albums of both), and while in college she was offered a touring gig by jazz great Illinois Jauet. (She turned it down in favor of graduate school.)

While Fleming’s opera appearances are less frequent now, at least two are in the works: a 2022 world premiere at the Metropolitan Opera in Kevin Puts’ The Hours and the role of Pat Nixon in John Adams’ Nixon in China. She’s also bent on succeeding in a long-running quest: “To find a really good light roast coffee! Coffee is my desert island food, but I’m just not a dark roast lover.”

Renée Fleming in Concert launches a new series of Great Performances from the Met on PBS. Its 12 vocal recitals include sopranos Anna Netrebko and Angel Blue, tenors Jonas Kaufmann and Roberto Alagna, and bass-baritone Bryn Terfel. The series ends with a New Year’s Eve gala.

By then, Tom Brady will be back on the football field, where he and Fleming could have once crossed paths. She sang the national anthem at the 2014 Super Bowl, the first and only opera singer to do so. Brady blew his chance to meet her that year, as his former team, the New England Patriots, lost to the Denver Broncos in the AFC Conference Championship. Of course, he could have always tuned in to her on TV. ◀

You can tune in to Renée Fleming in Concert at 9 p.m. on Friday, March 19, on KNME-HD 5.1 or stream it at portal.knme.org/livestream.