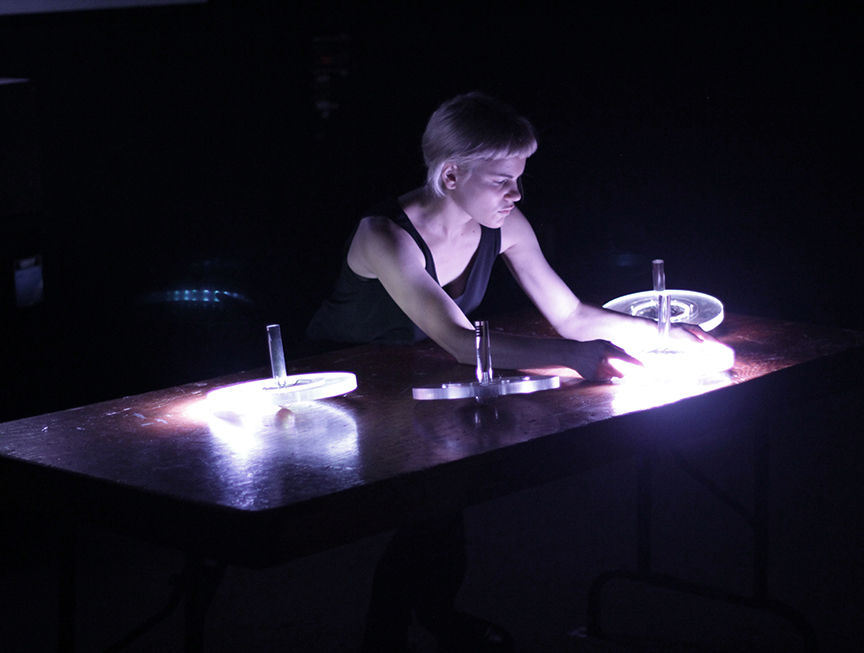 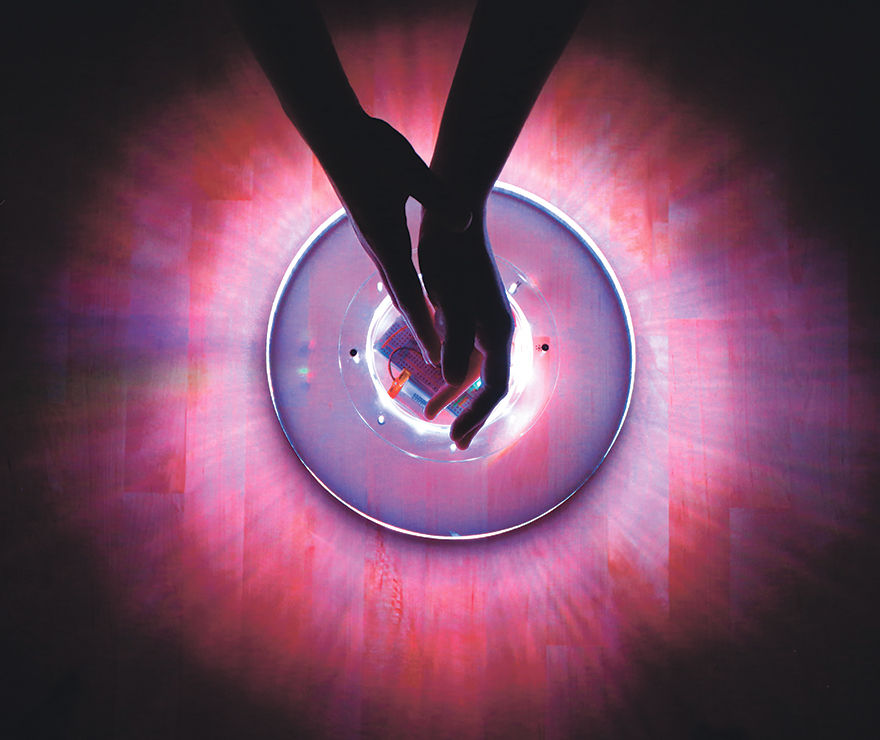 As a glowing disc spins, we hear a deep, rhythmic sound. Hands appear,  turning another disc slightly, then another, more rapidly, and an ethereal music and a crazily modulated voice join the aural mix. As we watch, the hands manipulate four light-filled discs, which seem to produce a mesmerizing sequence of chirps, modulated choral effects, lights, rhythmic fragments, and vocalizations: a lilting, wavery  voice repeats the word “re-vol-vers,  re-vol-vers, re-vol-vers.” These are from Myriam Bleau’s piece Soft Revolvers, which she performs at El Museo Cultural de  Santa Fe on Friday, June 12, and Saturday, June 13, at 7 p.m., as part of this year’s Currents International New Media Festival.

The discs are actually large tops built by the artist. “Most of the pieces that I used for these are things you can buy off the shelf, but the big, clear acrylic discs I had to cut out with a saw,” Bleau said. She spoke with Pasatiempo from Baton Rouge, where she had just performed at the 15th International Conference on New Interfaces for Musical Expression.

Bleau, based in Montreal, is a musician who is interested in “creating cohesive systems that integrate sound, light, and movement” and “proposing new contexts for the musical experience.” Each of her tops has an “instrument” associated with it; these can be audio samples of a voice, a bass sound, or a percussive noise. Inside the tops are LED lights, as well as gyroscopes and accelerometers that communicate wirelessly with a computer. The tops’ motions — fast twirl, slow twirl, hand-assisted rotation around its edge, a tipping thunk — stimulate sounds based on musical algorithms that Bleau designed using the Pure Data visual programming language. A camera planted above the table projects a blown-up image of the artist, tops, and table onto a screen behind her.

During the approximately 20-minute performance of Soft Revolvers, the audience witnesses not only the indescribable variety of noises and jittery lights, but the artist’s movements — alternately deliberate and dancelike — as she makes decisions about motivating the tops. Sometimes she gets a beat going for a few seconds, then it’s obliterated by something new. However, as the “concert” proceeds, its overall character is most reminiscent of hip hop.

Bleau said the relationships between her motions and the sounds are very direct. “A lot of people pick up the details of my interactions. I’m not generally interested in blurry relationships that are too romantic for me. When I spin a top, sound starts playing. When the tops spin faster, the samples are played at a higher pitch or the rhythmic patterns will be played faster.

“On stage, I need to handle the tops so they don’t fall off the table or bump into each other at moments that wouldn’t make sense musically. I think people can feel that tension and know what to anticipate in my gestures since they know the objects’ behavior well.” Bleau mentioned a longstanding interest in using familiar objects in her audiovisual projects. The types of movements expected from a top, for instance, are easily understandable because of our associations with the childhood toy.

There is an interesting contrast between the “machine” quality of the aural and visual phenomena in Soft Revolvers and the fact that Bleau’s triggering everything with human touch. And she dances to the grooves she creates. “I am definitely dancing to the music sometimes, like a DJ would do. At slow speeds, the tops act more like instruments and I can do gestures like scratch solos. There’s always a play between background and foreground and between soloing and  what’s happening in the background, so it’s really like  a DJ performance.” Has she done that? “No. I’ve played guitar in hip hop bands, but I was never a DJ  with turntables.”

Bleau also plays cello and piano and is a composer. Her previous works include the compositions Music for a Yoga Class, CAS.IO,  and Spinning Endless; and the installation/ performance pieces Photomaton, which is based on the concept of on/off, and Anti  Chambre, an animated sound-and-light piece presented via a row of parallel fluorescent lights. She is working on a master’s degree in composition at the University of Montreal; her thesis subject is an investigation of  performance-specific musical interfaces, such as the one she developed for Soft Revolvers. That piece may seem to be nothing but spontaneous, but in fact, it is very structured. “There are clear sections in it, with a progression. I always have room for improvisation in the [structure], because of the unpredictable nature of the interfaces. But composition is always very important to me. I like to craft the experience. Composition plays an important role in everything that I do. The tension and release dynamics in a performance can be orchestrated to have the strongest impact on the spectator, and that’s always what I’m trying to achieve.”

In the year or so since she premiered Soft Revolvers, she has evolved the piece in many ways, including the fact that she has become much more comfortable with the language of gestures needed to animate the tops. “One thing that is very important to me is to be at risk in some way when I perform, so I always add new elements so I’m not completely sure what’s going to happen. I want to keep myself on the edge, and I want the performance to be as visceral as possible. Also, in the performance, I truly have to run around and make sure the tops don’t fall off, and it can be quite stressful, so that also keeps me on the edge.”

One of the factors in her mind when she conceived Soft Revolvers was that so many performances of electronic music are visually boring. “I love this music, and I love listening to it but whenever I go to a concert I’m very frustrated with how it’s presented. Usually there’s somebody behind a laptop and not really moving and so why are you even on the stage? I’ve been playing guitar for a long time and I love the audience responding to you. With the tops, sometimes I really feel that the audience is with me and understands where I’m going, like during a jazz concert.

“I’m trying to find ways to perform the music live  in a way that makes sense. That’s why my projects are  not necessarily similar from one to another because I’m trying to answer that question as broadly as  possible.”   ◀