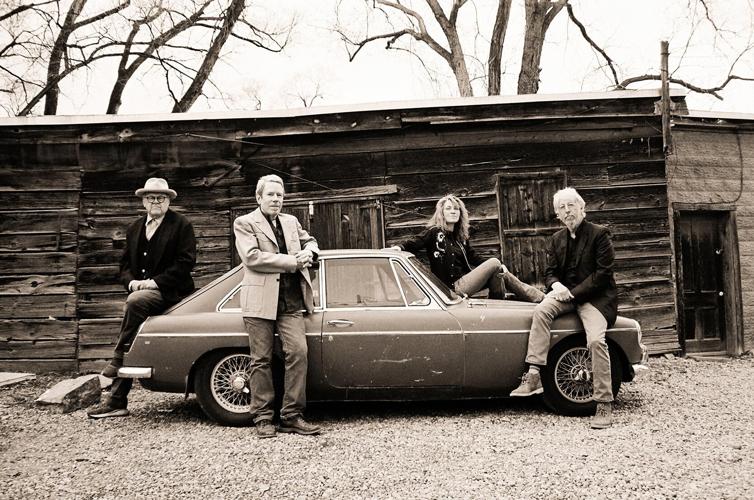 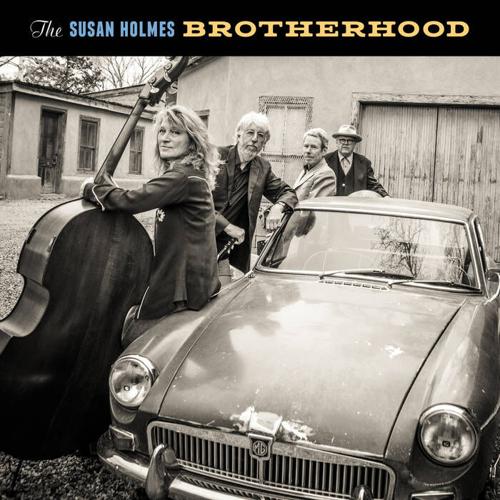 It’s mere seconds into the opening instrumental of the Santa Fe-based quartet The Susan Holmes Brotherhood’s premiere self-titled EP and you almost can’t help but smile. The buoyant, mid-tempo track, “Diggity Dog,” is a song for a leisurely Sunday drive maybe. Perfect for a mellow groove.

Holmes, the band’s founder, is a fixture on the New Mexico music scene, appearing in numerous bands (her own and others’) over the years and on studio recordings with a stellar lineup of colleagues, including Americana and roots music legend Bill Hearne, HOTH Brothers co-founder Boris McCutcheon, and former Santa Fean Sharon Gilchrist of the bluegrass band Mary and Mars.

The 6-track EP, which features one lyric-based song, “Sleepy Desert Moon,” and five instrumentals, is an eclectic mix of genres, including Americana, jazz, honky-tonk, country, rock, and blues. That’s a whole lot of influences for a single EP with a runtime of around 25 minutes. The fact that it hangs together so well is a testament to the talent of the musicians (who’ve all worked with Holmes in the past) and Holmes’ commitment to high fidelity in the studio, which stems from her own experience as an album producer.

The album is available as a download or as a limited edition compact disc ($10) at thesusanholmesbrotherhood.bandcamp.com/releases.

“I started it last summer with a song I wrote a couple of decades ago,” says Holmes, 63, who’s also a member of the jazz guitar group Alpha Cats. At the time she began writing “Sleepy Desert Moon,” she was in a band called The Buckarettes. “I wrote the song with Katie Gill’s voice in mind. She’s got a beautiful, youthful soprano. We had an unfinished version, but it got shelved for some reason. The Alpha Cats do it as an instrumental.”

It’s a song that appeared in various guises over the years, with male singers trying their luck from time to time, but Holmes was always on the lookout for that perfect female voice to give the slinky Western ballad its utmost expression.

By chance, singer and songwriter Shannon McNally was coming to play in Abiquiu in 2021 and made a stop in Santa Fe.

Holmes approached McNally and asked if her if she would sing her demo "and she goes, ‘Sure.’ And she went in and knocked it out of the park.”

“The first blush of evening descends on the mesa,” croons McNally, bringing the album to a sexy, Latin-infused conclusion. Holmes’ lyrics leave the listener with an appreciation for their passionate sense of place.

The sun has no shame

It goes down in flames as if falling from grace

Leaving only a tumble of amber and ultramarine

Holmes started getting together, casually, with the band’s fellow members — George Langston, Jon Graboff, and Paul Pearcy — in the spring of 2018. Graboff, who plays guitar, pedal steel, and mandolin, recently relocated to New Mexico from the East Coast, and Pearcy, a percussionist who had been living in Austin, Texas, was a recent arrival too.

"Susan has a way of gathering up really talented people and putting them in a room together.”  —  Boris McCutcheon

They started by jamming in Holmes’ living room and composing instrumentals.

“We came up with our own stuff, then did different arrangements of guitar instrumentals that we’ve always loved,” Holmes says. “We had a rule within our little group that we had to come up with a whole new part for a song or somehow give it our own spin.”

The group’s live appearances have been minimal due to the fact that they’re all working musicians in other bands. A gig at the Mineshaft Tavern in Madrid in late 2018 was cut short by torrential rain, and a planned shindig for winter, in 2020, was canceled because of COVID. But Holmes was determined to get them all in the studio to lay down their originals.

"Susan has a way of gathering up really talented people and putting them in a room together," says McCutcheon, who's been playing with Holmes since as far back as the aughts, when she joined his band, The Saltlicks, for a European tour. "She produced Bill Hearne's best album, From Santa Fe to Las Cruces."

Holmes is a stickler for detail in the studio, says McCutcheon, who describes himself as a more free-wheeling type of session musician. And while that dynamic proved a nice balance in the studio over the years, the superb audio and tight-knit sound of The Susan Holmes Brotherhood is a mark of her commitment to quality.

“To me, it’s greasy, fun, funky, nerdy, majestic, and jaunty,” McCutcheon says of the new EP. “The reason it’s such a spectacular sounding album is it’s polished just enough. Whenever you put these instrumental albums together, you run the risk of being too slick, too produced.”

Holmes grew up in Lawrence, Kansas, and joined her elementary school band, playing violin (badly, she says). She transitioned to upright bass as a member of her high school orchestra, then took vocal training at Kansas University.

A self-described “chick singer in a lot of bar bands,” Holmes says that she’s not a good front person at all.

“I pretty much blew my voice out because it was smoky then,” says Holmes, who does not smoke. “I love singing, but I really wanted to play guitar. I bought myself a Telecaster and put an amp on layaway. I started playing in a band with the Guitar God of Lawrence, Jim Stringer. We later got married for a short time. He really took me to school. We played in Hutchinson, Topeka, Kansas City. He lives in Austin now.”

Holmes has no immediate plans for a live performance with the Brotherhood to promote the album, but she approached mastering it with an eye toward possibly producing it as a full-length LP on vinyl at a later date.

“The way people access music now is changing so fast,” she says. “It’s hard for me to keep on top of that. I keep thinking about the renaissance of the LP and how long that’s actually going to last. If I could come into some more money and record a couple more songs and remaster it for vinyl, that would be great. But, because vinyl’s a petroleum-based product, for the most part, it’s harmful to the environment to manufacture.”

She adds, joking, “I guess it will be coming out on 8-track soon.”

Holmes went into the studio with a powerhouse lineup of musicians. “And it doesn’t sound like they’re trying to outdo each other,” McCutcheon says. “It sounds like a well-greased machine.”

This story has been amended to reflect the following corrections. A previous version of this story incorrectly stated Holmes' offer to McNally; Holmes asked McNally if she would sing her demo. Also, the reason Holmes blew her voice was incorrectly quoted; she said that "it was smoky back then." Lastly, the Alpha Cats are a Western swing band.