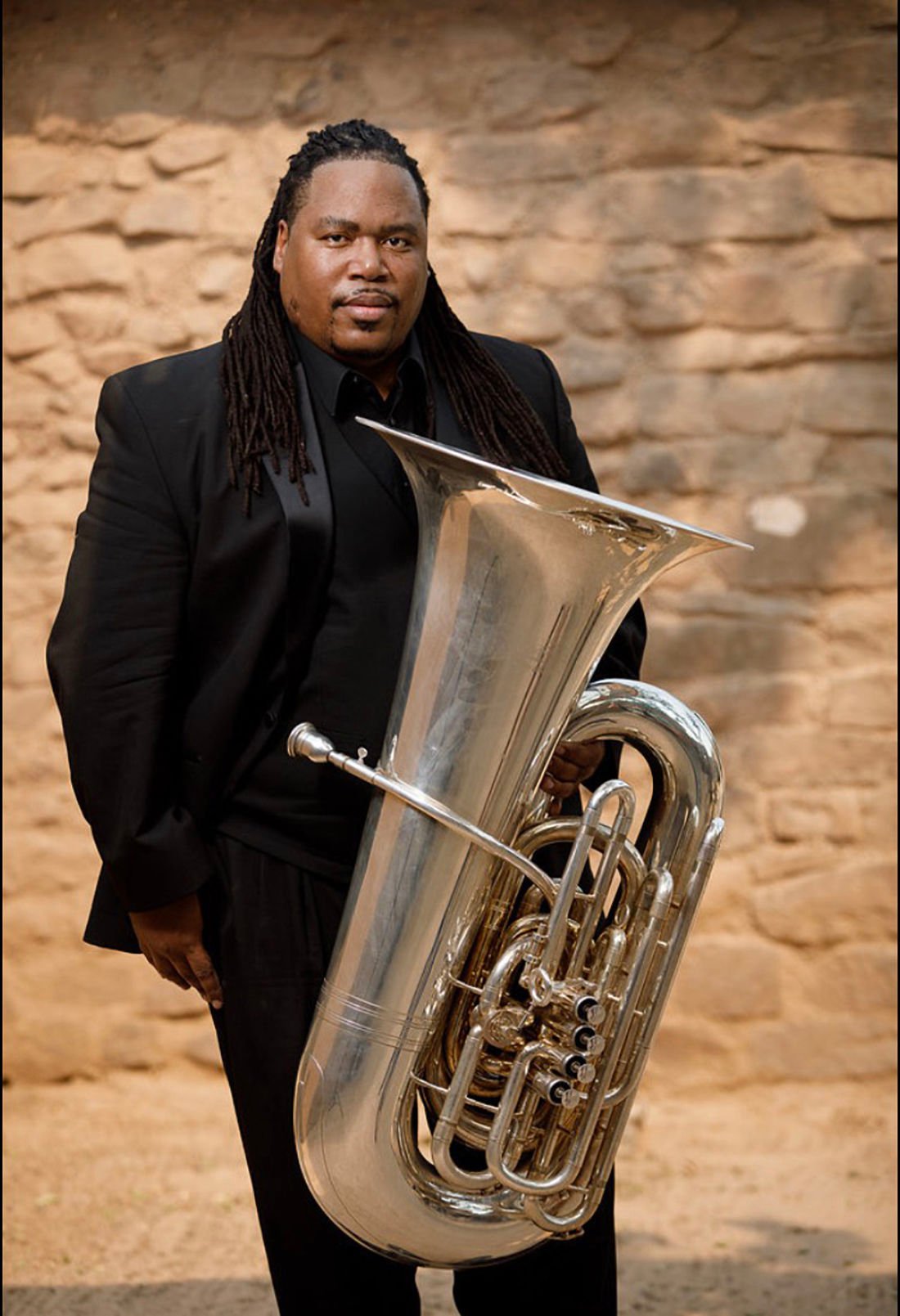 Tuba or not tuba? That is the question. The Santa Fe Symphony answered yes, programming a concerto for an instrument that has long suffered the slings and arrows of outrageous comic insults. It opens the group’s “New Worlds” concert on Sunday, Feb. 16, which also features a violin concerto by contemporary composer Miguel del Águila and Antonín Dvořák’s Symphony No. 9, subtitled “From the New World.”

Even though the instrument was invented in 1835, quite a few current Santa Feans were alive when the world’s first tuba concerto was played in 1954. The composer was Ralph Vaughan Williams, and his Tuba Concerto in F Minor is the piece that the orchestra and soloist Richard White are performing in this concert.

“I think it’s the coolest brass instrument because it’s the youngest,” White says. “The tuba has a beautiful, lyrical voice. It can do more than any other brass instrument because it has a much wider range, up to five octaves. I feel like I have a personal responsibility for the audience to leave saying, ‘Wow, I had no idea the tuba could do that.’ ”

The first African American to earn a doctor of arts degree in tuba performance, White is now an associate professor at the University of New Mexico and principal tubist for the New Mexico Philharmonic, as well as an active soloist around the country.

His journey to New Mexico is one of the most incredible stories in classical music, so much so that his life story was made into a 2019 documentary called R.A.W. Tuba. It has already been screened at more than a dozen film festivals around the United States and Canada, with many more showings scheduled. (Antoine is White’s middle name, so the title incorporates his initials.)

White grew up in Baltimore and was often homeless as a small child. His mother was an alcoholic, and he remembers seeing his biological father just once, through a prison visitation window. He often slept in abandoned row houses under pieces of cardboard and still has a scar on his abdomen where he was once chewed on by rats at night. Bathing meant splashing water on himself from a park fountain he was barely tall enough to reach.

At age 4, he was adopted by the same couple who had adopted his mother years earlier, so his grandparents became his parents. A musical career was far from his thoughts while growing up. “I wanted to be a football player, but I broke my hip in a pickup game in seventh grade, so I decided to focus on music instead,” he explains. He borrowed a plastic sousaphone from the middle school band director and started to tackle it by following along with a “How to Play the Sousaphone” cassette tape.

White’s hopes were almost dashed when he showed up a day late for his audition with the Baltimore School for the Performing Arts. The only person there was the school director, who eventually agreed to hear the youngster play. Even though White could barely read music, his playing was good enough to gain admittance.

From there he went to Johns Hopkins University for his undergraduate degree, followed by a master’s and his doctorate at Indiana University. Somewhat surprisingly for a tuba player, his favorite composer is Bach. His dissertation topic? “If Bach Had Had a Tuba.”

The bulk of White’s playing, as with all classical tuba players, is in symphony orchestras. Asked what would be lost if the tuba didn’t play in big Romantic-era pieces, White replies, “Jokingly, I say the tuba’s job is to show everyone else how bad they are at rhythm and pitch. In reality, lots of color and a strong foundation would be lost. It’s an important voice, even if you don’t know it’s there.

“I identify with the tuba because it’s the underdog, just like I was growing up. And it’s like New Mexico because it’s really beautiful and yet it has a lot of potential yet to be realized.”

Uruguay-born Miguel del Águila is one of today’s most acclaimed composers. He’s been nominated for three Grammy Awards, including two for Best Contemporary Classical Composition, and his works have been described as “elegant and affectionate” by The New York Times, “vibrant colorful music pulsating with a tremendous rhythmic vitality” by Fanfare, and “sonically dazzling” by the Los Angeles Times.

One of del Águila’s hallmarks is exploring a single subject through multiple works. His violin concerto El Viaje de una Vida (The Journey of a Lifetime) is a second look at themes from La vida es sueño (Life Is a Dream), one of the greatest works from the so-called Spanish Golden Age of drama. Del Águila’s first treatment of the subject was a string quartet written in 2002.

Santa Feans know Guillermo Figueroa primarily as a conductor, but he began his career as a high-profile violinist. He’s the soloist here, as he was for the work’s world premiere by the New Mexico Symphony Orchestra in 2008. In the concerto, the violinist represents a traveler who makes a long journey to the New World. After arriving, his hopes go unrealized, illustrated by the soloist who is now backstage playing in the nostalgic style of the vidalita, a type of gaucho song. The traveler then returns to his homeland, a trek that ends with a stormy confrontation between soloist and orchestra.

Antonín Dvořák and much of his family spent almost three years in America, during which time he wrote three of his most celebrated works, including the Symphony No. 9. He also served as the director of New York’s National Conservatory of Music of America, a progressive institute that was a premier musical training ground for women, African Americans, people with disabilities, and other underrepresented groups.

Dvořák embraced the school’s multiethnic outlook, famously declaring in the New York Herald: “In the Negro melodies of America, I discover all that is needed for a great and noble school of music.” He was also fascinated by the Native American music he heard during his time in Iowa, where he saw a performance given by a Native troupe as part of a traveling medicine show. At the composer’s request, the troupe privately performed many more songs and dances for the Dvořák family.

Prior to the premiere of his New World symphony at Carnegie Hall in December 1893, Dvořák suggested that he had used African American and Native American melodies in the composition. This may have been in part a public relations maneuver, as no such melodies have been specifically identified, although there are several tunes that follow their contours and five-note scale patterns.

In any case, the symphony’s rapturously received debut may have been the greatest triumph in Dvorˇák’s career. It went on to become one of the most beloved and most frequently performed works in the repertory, especially notable for a prominent theme first played by the horns that unifies all four movements and for a haunting melody from the slow second movement that was later fitted with words by one of Dvořák’s pupils, transforming into the popular spiritual “Goin’ Home.” ◀