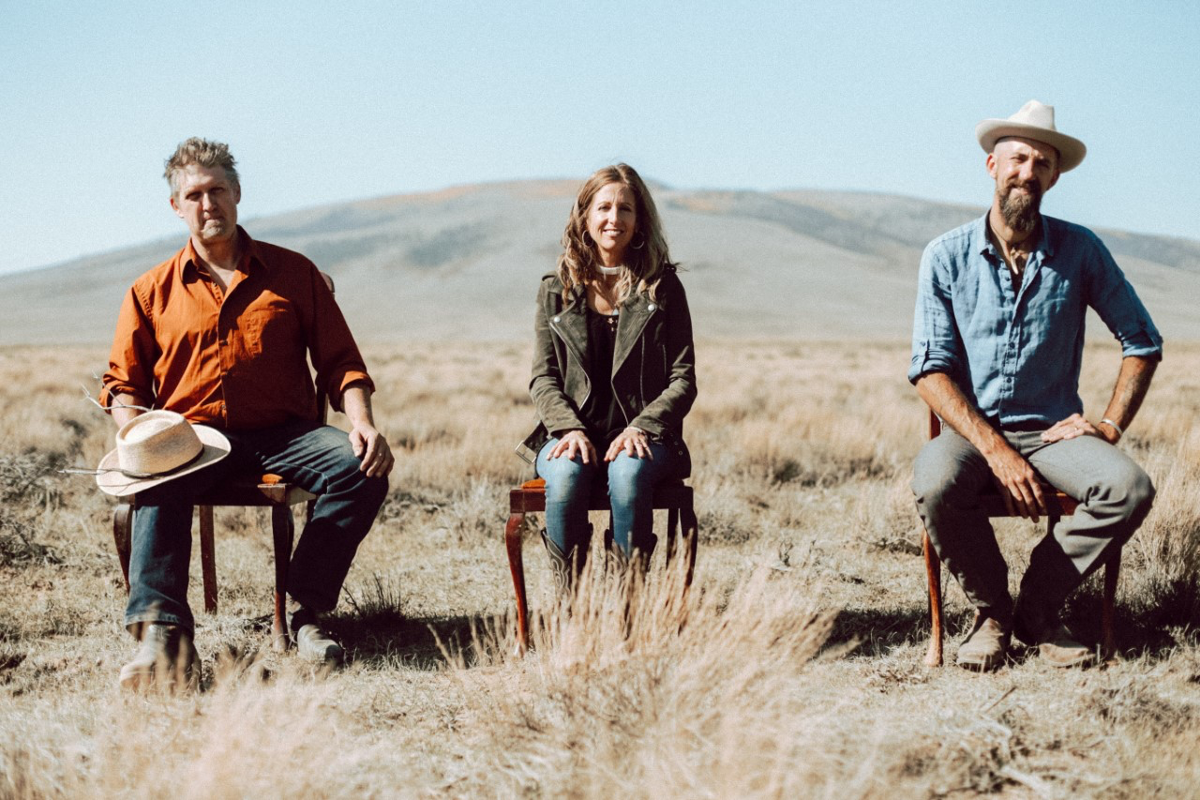 Initially, the HOTH Brothers was strictly a boys’ club. Then, vocalist and upright bass player Sarah Ferrell drifted into the group. “After that, they were like, ‘Man, we really shouldn’t have named the band the HOTH Brothers;” photo Jesse Raine Littlebird. 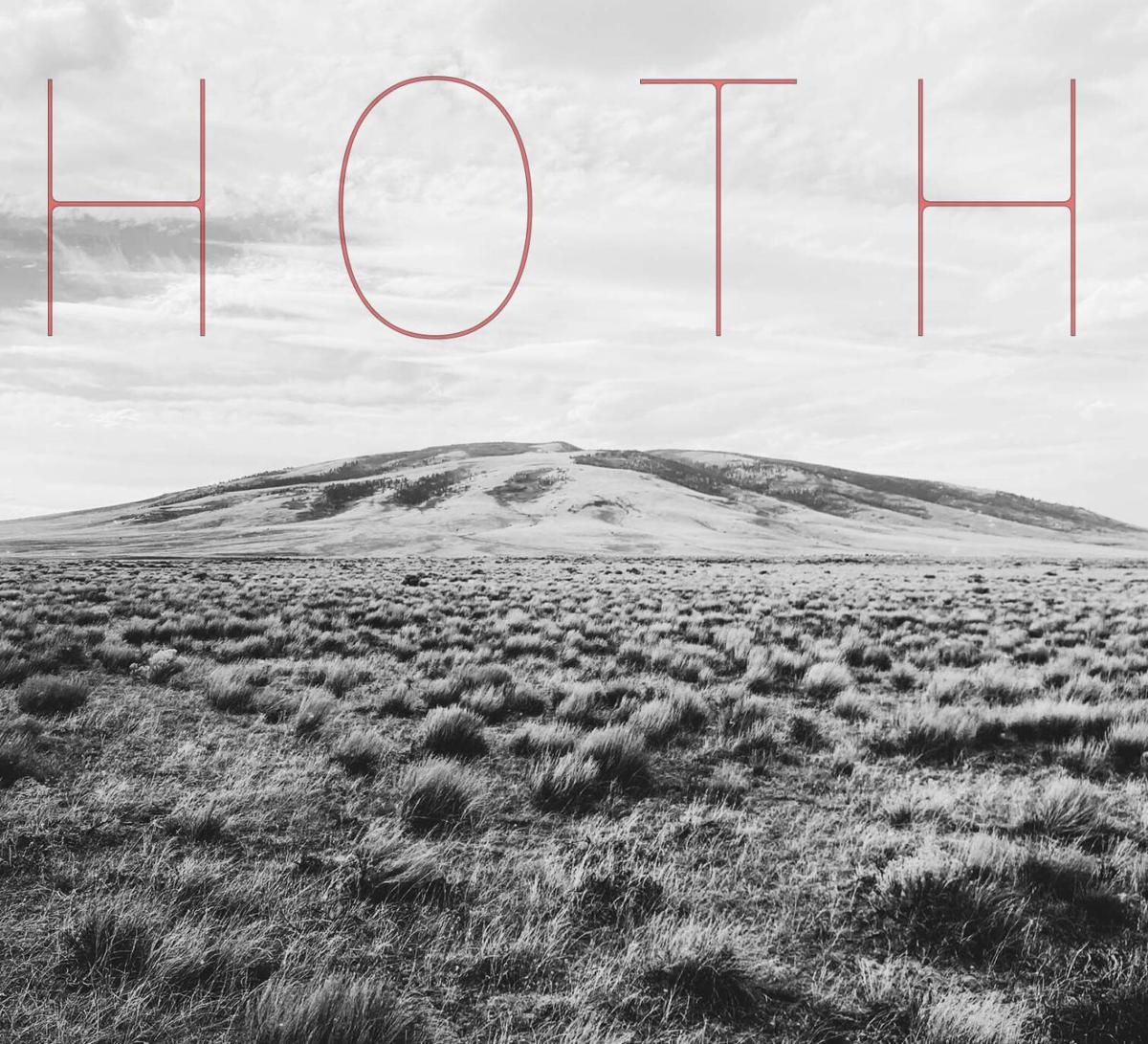 Initially, the HOTH Brothers was strictly a boys’ club. Then, vocalist and upright bass player Sarah Ferrell drifted into the group. “After that, they were like, ‘Man, we really shouldn’t have named the band the HOTH Brothers;” photo Jesse Raine Littlebird.

Sometimes what you want from a really great song is more than a feeling. You want a story. The New Mexico-based American roots trio HOTH Brothers Band gives you both. In a way, their songs hark back to an old-school songwriting style that commemorates the lives, loves, and adventures of everyday people. But if the whopping 17 tracks on their rustic, pared-down second album, Tell Me How You Feel (2020), is any indication, the stories are contemporary. It’s the sound that gives it much of its classic feel.

“I guess you would call it Americana, or mountain music,” says the band’s co-founder, musician and vocalist Boris McCutcheon, 51, whose own name for the band’s style of music is “salt-cured New Mexicana.”

“I got my start in music getting lessons from Ralph Rinzler, who was one of the founders of Folkways Records,” says McCutcheon, who devised the band’s first album, Workin’ and Dreamin’ (2019), with musician Bard Edrington while they were pruning fruit trees together in northern New Mexico orchards. “He’s from Tennessee. I’m from Boston. There’s definitely a coming together of the North and the South when we play. Bard plays mandolin and banjo. I play mandolin, banjo, and guitar. But I’m more the mandolin player and Bard’s more the banjo player.”

Completing the trio is vocalist and upright bass player Sarah Ferrell, a former band member, along with Edrington, of the Albuquerque group Three String Bale.

“I’d come and sing harmonies with Bard and Boris here and there and play the bass, but I wasn’t really part of the band,” says Ferrell, 45, who went from guest artist on the HOTH Brothers’ first album to a full-fledged member while it was still being recorded. “After that, they were like, ‘Man, we really shouldn’t have named the band the HOTH Brothers.’”

The band’s name stands for High on the Hog, which is what they originally called themselves.

“We named the band High on the Hog from eating on the good parts up on a pig,” says Edrington, 43. “Then we thought, ‘That kind of sounds a little redneck.’ There was a woman booking shows for us up in Taos, and she just kept abbreviating it to HOTH. We thought that was a cool acronym for it. That was before Sarah really started playing with us.”

Tell Me How You Feel, which is available for download on hothbrothers.com for $15, launches on Sunday, May 2, with a now-sold-out performance on the outdoor stage at Tumbleroot Brewery in Santa Fe. But it’s already making waves in the music scene. Notably, it hit the number 10 spot in April on the monthly Euro Americana Chart (euroamericanachart.eu), just six spots below famed rockers Steve Earle & The Dukes.

“We have all these people that promote us in The Netherlands, the U.K., and Scotland,” Edrington says. “We’re getting ready to do a radio promo campaign in the United States too.”

To hear the band tell it, Tell Me How You Feel has a much tighter sound than their previous effort. The impact of the coronavirus pandemic played a part; it forced them to cancel two European tours — a total of 30 shows — in 2020.

“We wanted to play music, but we didn’t have any gigs, so we were able to really focus on the songs we wanted to record,” Edrington says. “We hit a groove on that record. We recorded all those songs in two days.”

That’s not to say that their debut album wasn’t a noble effort. Like its follow-up, it’s full of memorable solo licks and expert harmonies that make it a catchy listen. And, from the gospel-themed track Trees of Heaven to the politically charged anti-Donald Trump song January, it’s also an eclectic one. To the band’s surprise, it brought them some instant notoriety when it won Best Album of the Year at the 2020 New Mexico Music Awards.

“I happened to just come across the link for entering stuff one day,” Edrington says. “I was like, All right. It’s 30 bucks. I’ll enter it and see what happens. We were not expecting to win.”

Workin’ and Dreamin’ represented the confluence of seasoned musicians with an easy rapport and a love for recording. High up in the trees, pruning together, McCutcheon and Edrington, a landscaper by profession, talked music all day long. It was only a matter of time before they began writing songs together and planning to record.

“Both albums were recorded here at my house,” Edrington says. “We used Bill Palmer, who is a local engineer and recording artist. He has a mobile set up, and so he’s able to come and set up everything wherever you want”

Like Neko Case’s “country noir” tinged home recording Canadian Amp, Tell Me How You Feel has the feeling of space around it, a kind of haunting quality that seems lacking in recordings made in the sterile environment of a studio.

“A lot of times in a recording studio, you feel like you’re in this dark place,” Ferrell says. “And, hour upon hour, you start to feel kind of uninspired — like, ‘Let’s get this over with.’ This didn’t feel like that at all. We were in Bard’s house. It was an early summer day. We had the glass doors and windows open. We felt like we were outside and inside. I think that comes into the music.”

What also comes into it is a sense of place. New Mexico, to be specific. It’s as much about the region as it is about the people who inhabit it. The opening track, “Judith,” for instance, tells the story of an old painter in the remote mountain village of Truchas, while “Cliff Fendler” references a flower native to New Mexico. “Slickhorn,” which ambles slow and easy, is set on the San Juan River, “where monsoons rubbed Mother Earth raw,” croons McCutcheon, who’s joined in harmony by Ferrell and Edrington, “down to the bluestone of her mantle.”

“We’re all transplants like so many New Mexicans,” Edrington says. “But this is the Land of Enchantment ... and entrapment. I’ve left and come back because I couldn’t stay gone. It’s such a unique landscape and culture that, for me, it’s very easy to get inspired. Flocks of pinyon jays flying over my house in the summer is inspiration. I grew up back East. There’s deciduous forests that engulf everything, and you get this tunnel vision. Out here, it’s much different. Every corner you turn, it’s beautiful.

Edrington tried to capture the sense of place reflected in the music in the album’s cover, which he designed, and which depicts San Antonio Mountain.

Amid the regional settings, the stories told through song express longing, love, and regret, including the despair of a prison inmate’s lover, who fails to free the prisoner in the dark track “Passage,” or a protagonist’s unconsummated love for the daughter of a cowpuncher in the soulful ballad “Wilding of Robby.”

“Her eyes shown like diamonds in a dark coal mine,” sings Ferrell. “I confessed my love for her but only in my mind.”

Tell Me How You Feel is rooted in folk, gospel, country, blues, and other traditional styles that developed in the United States. It calls all these styles to mind without being beholden to them. Among the band’s diverse influences is the Harry Smith Anthology of American Folk Music, a compendium of songs collected by Smith, a bohemian West Coast filmmaker, that was released in 1952 by Folkways Records.

“I cut my teeth playing music and writing music on that kind of stuff,” Edrington says.

The trio’s harmonizing is one of the album’s standout features. And you may find yourself wanting to join in when they all break into chorus. Add to that the ensemble playing, which gives each musician plenty of chances to show off their individual skills without upstaging one another. No headphones were used while recording the album. They just listened.

“We sat in a room and played quietly enough that we could hear each other over our own instrument,” Edrington says. “That was really a big part of the sound of this album because Bill is able to take the quietest sound and make it sound huge. We went really light on the overdubs, too. You can hear that in songs when nothing’s been added to it. You can really hear the musicianship, the space between the people.” ◀