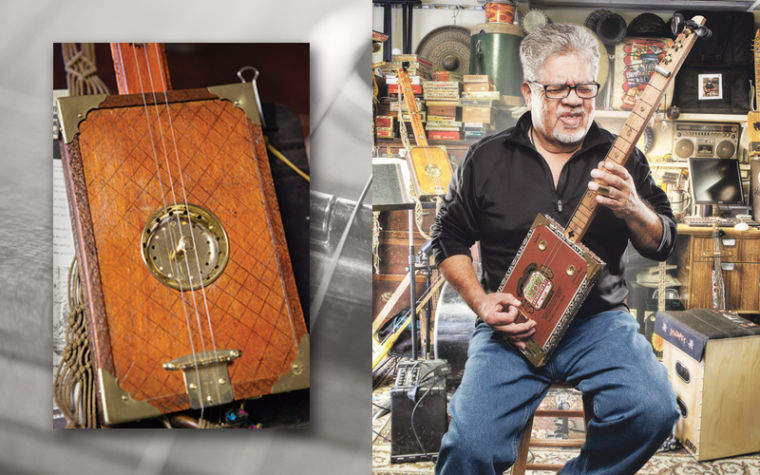 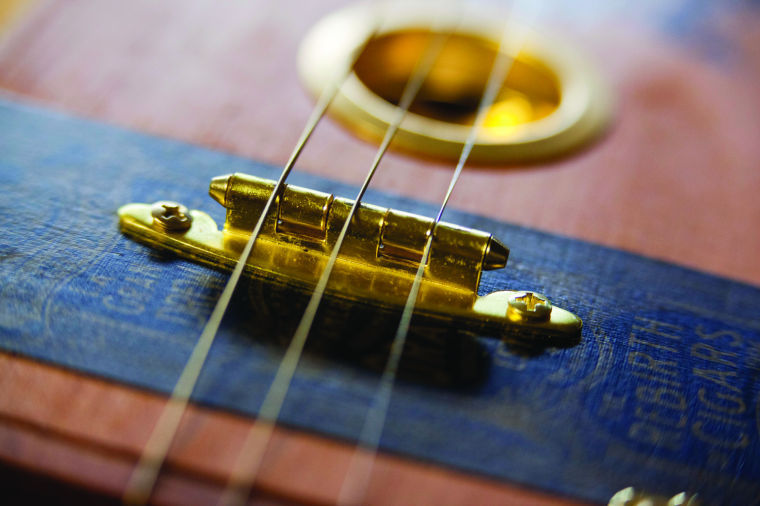 When Albuquerque musician and instrument designer/builder Hector Peña was a young man, the blues bit him. Hard. Howlin’ Wolf, Sonny Boy Williamson, Son House, and Robert Johnson did more to move Peña’s soul than the British Invasion ever did, and his lifelong love of their music has informed a decades-long journey that now finds him circling back to the humble beginnings of the Mississippi Delta sound.

“Once I heard the blues as a teenager,” Peña said, “right away I was hooked. I knew I wanted to learn how to play harmonica and guitar. Over the years I became a drummer and got into a lot of other genres, including Afro-Cuban jazz. I was a hand drummer and a trap drummer for many years and stayed with hand drumming for a really long time. But in recent years I’ve kind of come back to the roots of the music that first inspired me.”

In 2011 Peña began a journey to discover his true musical voice, which led him to the cigar-box guitar. “I found a picture of a cigar-box guitar on the internet and I thought, My god, what is that? I hadn’t seen one floating around the music scene. The more I dug into the instrument’s history, the more I wanted one, and the more I wanted to make one.” Peña has long been a fan of Sears, Roebuck and Co. catalog reproductions from the late 19th century, which often include illustrations of handcrafted instruments for sale. “The Victorian era, and the industriousness of it, really spoke to me because of all the creative ideas coming out for products of all kinds. I’d go to the music part of the catalogs and see violins for $10, and the craftsmanship was superb! Guitars, harps, harmonicas — I was fascinated by how many designs there were. I never saw a cigar-box guitar in those catalogs, though, and I kept thinking, man, why is this instrument still sitting in the back of the bus? By that point, the cigar-box guitar sound was  a blues dragon, and I was chasing it everywhere.”

On Friday, April 19, Peña and multi-instrumentalist Devon Hall, aka the Zia Conservatory, bring the music, culture, and history of the cigar-box guitar to Santa Fe with a performance and demonstration at Primo Cigar Shop. Peña and Hall are taking their handcrafted three-string cigar-box guitars — “the Delta-sound standard,” Peña said — and plan to perform 10 songs or so, including originals, Civil War tunes, and a few blues numbers.

The cigar-box guitar, or CBG, emerged in the Antebellum South as a cheap replacement for the banjo — an instrument modeled after the African banjar or banza, a stringed gourd instrument whose ancestral roots are murky. An  inspiration for the more modern CBG, especially in blues circles, is the diddley-bow, a single-stringed instrument with West African origins that is plucked and played with a slide such as a bottle or metal ring. Its emergence in the deep South in the ’20s and ’30s coincides with the earliest 78 rpm Delta blues wax recordings and the increasing popularity of “race records” across the country.

Peña’s growing passion for the CBG and all things handcrafted drove him to build one of his own. “The first CBG I built didn’t come out too bad. I then got to know more about the ins and outs of the instrument, like calibrating the distance between the nut [the strip of material at the top of the neck that guides the strings along the fretboard] and the bridge [the string-vibration transmitter attached to the guitar body, or resonator] using different hardware.”

Peña started building acoustic CBGs but quickly moved to electronic amplification once he learned enough about soldering to start mounting his own amplification devices to the guitars. “I had to figure out how to mount a piezo noise pickup to the thing, while still trying to trap that sound memory of the blues from my childhood — all inside a tiny box. I’m close, but I don’t have full authority over it yet. At the same time, you don’t want to trap that sound. Basically I use one piezo transducer per box, and I have it embedded on the neck inside the box, so the whole soundboard is lit up. I like the way it sounds. It’s very open, clean, and has a big twang to it.”

If the CBG is screaming too much high fidelity, Peña said, he sprays the inside of the cigar box resonator with insulation foam sealant. “You know the sound is bouncing inside that box, but you don’t know which direction it’s bouncing in. I just experiment and try to get the best sound out of each individual box.”

Peña sources cigar boxes from smoke shops, thrift stores, yard sales —  anywhere he can find them on the cheap, really — and each CBG is given a decorative finish. Peña prefers a larger box, such as an Arturo Fuente King box, but he’s not married to it, by any means. “You can use plenty of things as a resonator,” he said. “I’ve used a washboard to make a guitar. You can use frying pans, a hubcap ... I saw a guy use a bedpan to make a guitar once.”

Peña does a lot of his networking with other instrument builders on  www.cigarboxnation.com, a site for all things CBG that is used by music lovers and craftspeople alike. “The site’s kind of the zenith of the CBG community, and it welcomes kids, adults, and seniors. You can even get a free web page on the site. It’s a place for us to go and say, Hey, let’s build  a better mousetrap. I think for me the attraction is that CBG culture is  about building, not buying. We’ve gotten away from building things for ourselves. When you do make something like a guitar, you discover that what you make is like no other. And as a musician you become more  disciplined with yourself. You don’t ever let your resourcefulness as a creative person disappear.”

▼ Hector Peña and the Zia Conservatory