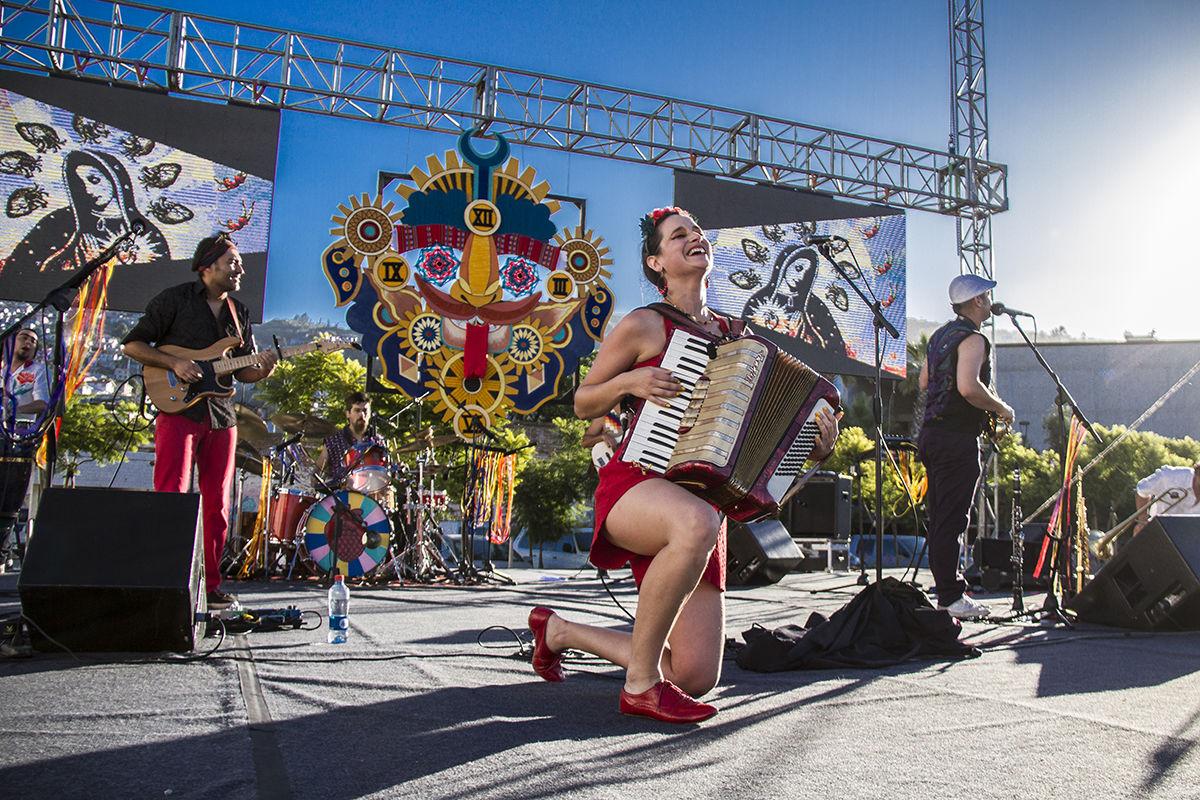 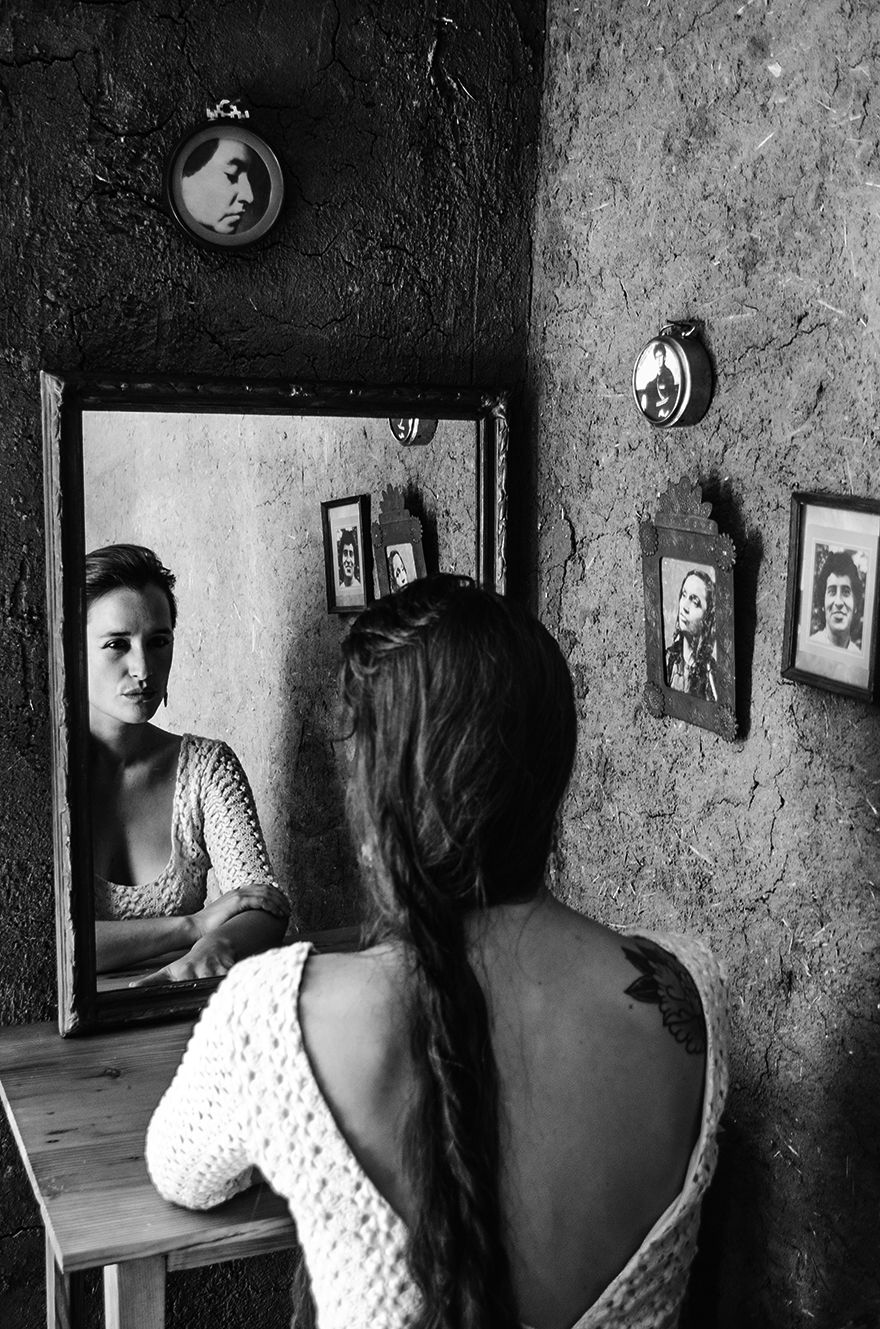 Chile’s Pascuala Ilabaca has a reputation as a tremendously dynamic young musician. She and her band, Fauna, have evolved a singular music and a flashy performance style, but they also perform traditional songs by Violeta Parra and from the country’s folk canon. Ilabaca’s musical personality has also been shaped by studies in India; those flavors are more often heard from her other group, Samadi, but they also show up in a bit of Indian vocal percussion on the Fauna video “Manikarnika.”

“I lived for a year in India when I was eleven years old. We were there for my father’s work,” Ilabaca said. “Then I always wanted to come back, so after university I went back with my husband, who is our drummer and tabla player.” That trip was financed by the Chilean government as a reward for Ilabaca’s revitalization of traditional sounds on her 2008 album Pascuala Canta a Violeta. “I studied there for one year, and then in 2017 I went to India again to study with my vocal teacher.”

Ilabaca spoke with Pasatiempo from her hometown of Valparaiso, Chile. She was getting ready to travel. “Tomorrow we are starting our tour, first to Tenarife, then to Barcelona and Portugal and on to the United States.” On Thursday, July 12, she and the band play a free concert on the Santa Fe Plaza for the annual International Folk Art Market’s community celebration and artist procession; the appearance is co-sponsored by Santa Fe Bandstand.

Ilabaca sings and plays accordion and electric keyboard; the members of Fauna are Jaime Frez (percussion), Christian Chiang (bass and flute), Juan Muñoz (guitar), and Miguel Angel Razzouk (saxophone and clarinet). “I never travel without them. We have been playing for almost 10 years. We are neighbors and we were students at the same university; they are so important in all my music. It begins with friendship and ends with a band. We love each other, which you can see when we perform.”

During her year in India, Ilabaca studied improvisation and the rhythms of that country’s traditional music. Following that immersion, she recorded two albums, both released in 2010: Perfume o Veneno with Samadi and Diablo Rojo, Diablo Verde with Fauna. The following year, she undertook her first tour of Europe. Her newest album is Rey Loj. “It is 10 songs speaking about how important it is to connect people with art in the street. There are a lot of different rhythms from around the world born in the street, and instruments like a drum set that a man plays standing up, like the orchestra man who is always in the street in Valparaiso. I use this instrument in my album and also a street organ.” She was enthused about a project adapting one of her compositions to play on a barrel organ. The process of encoding the music on a barrel roll took three months.

She and the band just released a new video, “El Baile del Kkoyaruna” (The Dance of the Kkoyaruna, which is “miner” in Quechua). “This is in a rural area of Chile and is the story of a miner leaving his native town to go work in another place, but he’s surrounded by a carnival that is following him. He’s walking but he doesn’t see them. The message is if you come from your native place and you need leave to find work — and this happens all over the world — you need to keep your place inside you to keep your dignity, your roots.”

There are more than two dozen dancers in the video. Asked if she ever does instrumental songs, Ilabaca said, “Not in my concerts, because the lyrics are very important, and I dance a lot. We all dance.” The poet Gabriela Mistral — whom Ilabaca described in another interview as a lesbian, a Buddhist, a Communist, and a shaman — is a preeminent figure in Chile’s history for the musician. “She is an inspiration because she was an incredible woman in an incredible time. I would like to find a magical lamp and live one day in the 1950s in Chile. There were a lot of different poets in Santiago and Valparaiso, and many people came and the education was really good then. I was feeling that sometimes you think the world is in constant evolution, but Chile in the ’50s was in a better state than now, because after the dictatorship [of General Augusto Pinochet, 1973-1990] we were stuck for many years. Mistral was speaking about all that 70 years ago.

“The young people think old culture is boring and they talk about veganism and feminism and think they created it, but I want to show them that Mistral and Parra and others were doing these things many decades ago,” she continued. “Yes, it is good to create, but it is also good to have a base in knowing what those people did.”

Ilabaca’s first album paid special tribute to Parra. “I was twenty-two years old and I wanted to record all of the unknown songs. I was angry that Chile education teaches you always the same poem by Mistral and the same song by Parra, so I wanted to show the diversity of what they did. People say Parra was a simple person with only one style but she had many different kinds of songs. Last year was the 100th anniversary of her birth. I’ve done my work about her, so now I can sing one well-known song with a lot of love. But when you sing something in Chile, they want you to sing that one song.”

Pascuala Ilabaca y Fauna are touring Rey Loj, but the bandleader exults in being able to do music that is more personal and not so commercial when she is on the road. “I never show the same thing twice,” she said. “I create the songlist at the sound check, once I can see the acoustics of the venue, and I ask the tour managers what kind of public will come, so I can make a special concert for them. In the United States, you have a lot of diversity — from a small-town university where people have never heard our music, which is not like Chicago, where lots of Latin American people live.”

Her audiences can always expect a flamboyant show featuring Ilabaca’s beautiful voice and vivacious accordion playing. “I took five years of practice to be able to dance with the accordion,” she said. “At first I was singing and playing on a chair, then I would stand up, and I learned how to do it without damaging my back.” ◀