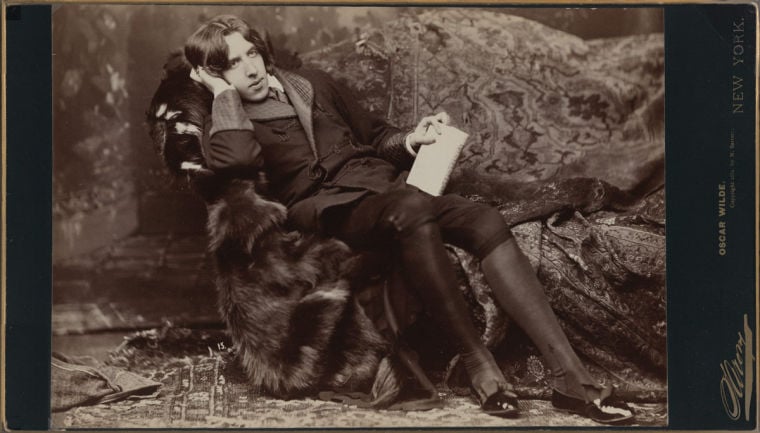 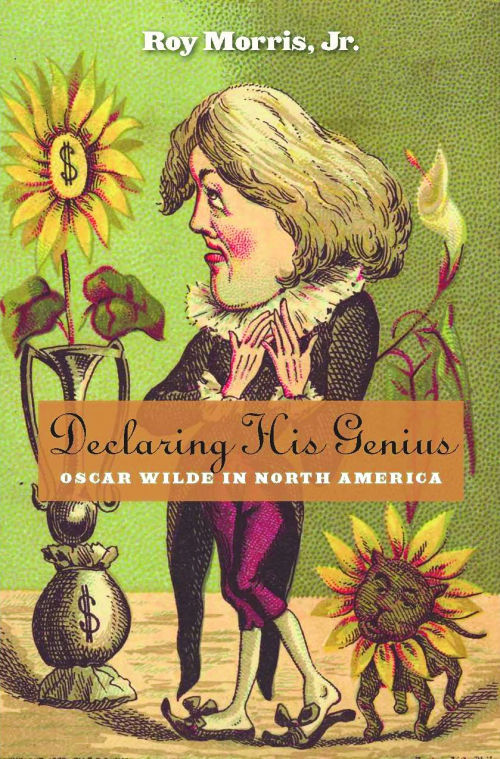 The opening scene of Brian’s Gilbert’s 1997 film Wilde shows the Irish poet and playwright arriving in Leadville, Colorado, on the back of a horse to cheers of “Yeeha!” and celebratory gunfire (in real life, Wilde arrived by train). The year is 1882. Wilde, played by Stephen Fry, is then lowered down a narrow shaft to visit with miners breaking silver from a seam named after its famous visitor. The miners are rapt with attention as Wilde, lit by torchlight, goes on about the importance of beauty. When one young shirtless and perspiring miner refills Wilde’s cup with drink, presumably whiskey, Wilde appears rapt in return.

That flame-lit scene framed in darkness foreshadows the rest of the movie: Wilde’s marriage, his turns of affection toward men, and the trial that sent him to prison. The film never again references the U.S. But that first scene suggests the country had a transformational effect on its visitor. Roy Morris Jr.’s recent book Declaring His Genius: Oscar Wilde in North America suggests that Wilde’s 11 months in North America changed the young man “to look inward rather than outward for his sense of achievement.” As for Wilde’s hope to change America, Morris writes, “No visiting celebrity, not even one as memorable as Oscar Wilde, could single-handedly effect lasting change in a country as vast and complex as the United States.”

Wilde was 27 when he landed in New York. He was known principally as an emerging poet, a champion of the Aesthetic movement, and a first-class wit. His only novel, The Picture of Dorian Gray, was eight years in the future, and it was 13 years before his popular play The Importance of Being Earnest would first be performed. Like Dickens before him and the Beatles some time after, Wilde viewed his conquest of America as a measure of his fame. He was, much like any number of today’s celebrities, one with little accomplishment to his name. But he was smart and capable of fulfilling his ambitions. “I have nothing to declare except my genius,” he reputedly told custom agents when arriving in New York on Jan. 3. Apparently, he overlooked a steamer trunk’s worth of false modesty and delusion.

Wilde set foot in America hoping to take it by storm. And, at least at first, he did. Dressed in knee breeches and black silk stockings and often clutching flowers, his long hair trailing to the shoulders of a green velvet coat, he underscored the divide, one that exists to this day, between those who were anxious to have America seen as cultured and sophisticated and those who perceived such aspirations as pretentious and elitist. But Wilde, despite being “a vision of intentionally affected preciosity,” in Morris’ words, had one talent that endeared him to Americans of all sorts. He could hold his drink with the best of them.

Over the next months, Wilde held his own against a suspicious press, degrading characterizations, and teasing college students. He competed for attention with P.T. Barnum’s new acquisition, Jumbo the elephant, and the brouhaha surrounding the trial of the man who shot President James Garfield. He was mocked for his long hair and affection toward flowers. With producer Richard D’Oyly Carte — a savvy advance man seeking to gain publicity for his production of Gilbert and Sullivan’s Patience, featuring a character that many believed spoofed Wilde — and a host of letters of recommendation, Wilde was well prepared. He also found willing acceptance in unlikely places. He was especially popular with women as he traveled across the country lecturing on the “English Renaissance” in art and decoration and visiting with the doyens of culture in America. In return for their attention, Wilde dispensed flattery by the plateful to American women, comparing them favorably to the women of London, whom he considered the most beautiful in the world. He was particularly flattering to American actresses, and with good reason. He was looking for someone to star in his play Vera, a tale based on the true story of a young Russian woman who attempted to assassinate the police chief of St. Petersburg. The London production had been canceled because of unlucky coincidences: the Russian czar Alexander II had been killed by a bomb, and a few months later Garfield was fatally shot. The timing, considering the subject matter, didn’t seem right. Maybe an American production could be mounted?

Wilde did copious press interviews, not all of them friendly. Records of the bulk of them still exist, and they serve to document the evolution of his thinking as well as his discoveries (a collection of American newspaper accounts, Oscar Wilde in America: The Interviews, was published by the University of Illinois Press in 2010). He told one reporter that he was looking forward to riding horseback through New Mexico, Colorado, and California: “There are such beautiful flowers there, and quantities of lilies.” He visited some 140 cities, including Fremont, Des Moines, and San Antonio as well as New York, San Francisco, and Washington, D.C. He paid his respects to Henry James, Oliver Wendell Holmes, Henry Wadsworth Longfellow, and Jefferson Davis and was gracious to each even if they weren’t in return. He struck up something of a friendship with Walt Whitman, whom he visited twice. Whitman put them on a first-name basis. “I will call you Oscar,” Morris reports Whitman saying. Wilde replied by placing his hand on Whitman’s knee and responding, “I like that so much.” Morris wonders if this was an act of flirtation. Whitman was 35 years Wilde’s senior.

After returning to Europe, Wilde delivered a lecture in London entitled “Personal Impressions of America.” In that speech, he said: “It is well worth one’s while to go to a country which can teach us the beauty of the word freedom and the value of the thing liberty.” Wilde considered his travels a turning point in his life. Back in London, he told Robert Sherard, the great-grandson of William Wordsworth, “The Oscar of the first period is dead. We are now concerned with the Oscar Wilde of the second period.” Indeed, on his return Wilde seemed to embrace the American virtues of hard work and honesty. But the true change in him was a turn to self-awareness. He discarded the affectation of his dress, cut back on drinking, and, while still leading a relatively flamboyant lifestyle, sought to be more natural in all ways. “One of the most delightful things I find in America,” he said at one point, “is meeting a people without prejudice — everywhere open to the truth.”

Much of Morris’ narrative can be found at shorter length in Richard Ellmann’s excellent 1987 biography of Wilde. But Morris’ telling is more entertaining and illuminated by Wilde’s own words.

In Paris, after Wilde’s release from prison in 1897, the author told a companion he was thinking of moving to the West, a place “where a man is a man, today, and yesterdays don’t count ... what a country to live in!” He died three years later. ◀

“I have nothing to declare except my genius,” Wilde reputedly told custom agents when arriving in New York in 1882.