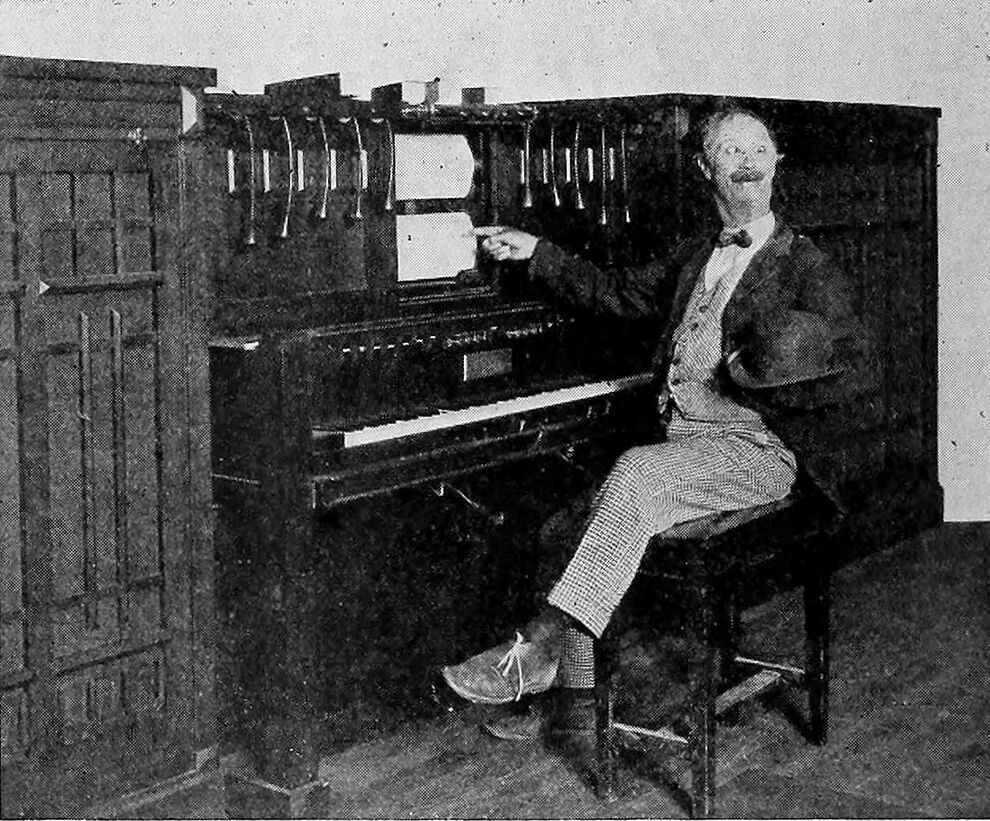 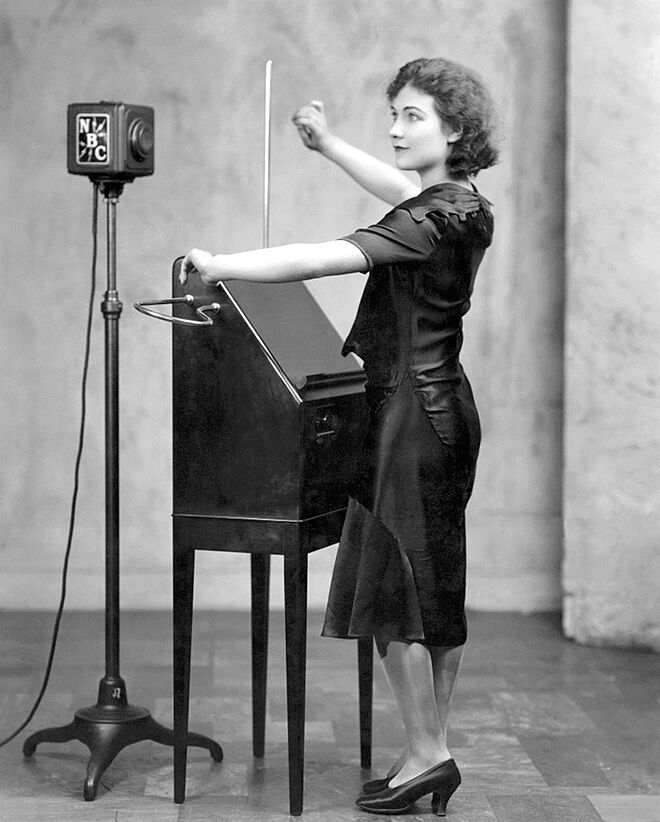 Alexandra Stepanoff playing the theremin on NBC Radio in July 1930. She was a student of its inventor, Leon Theremin. 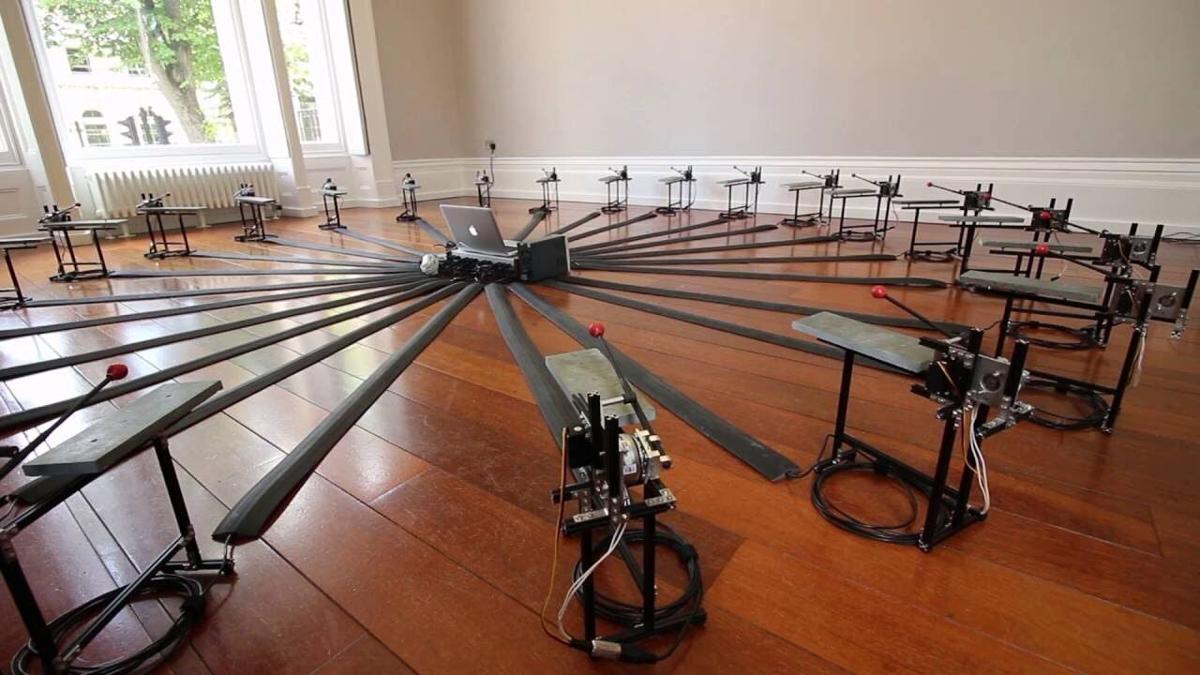 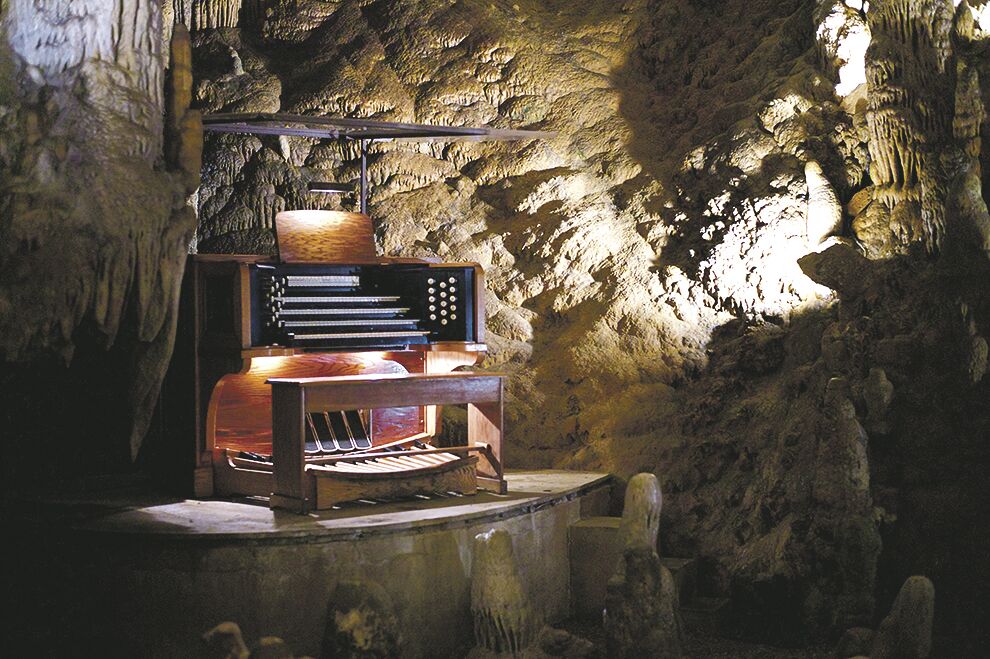 Console of the Great Stalacpipe Organ at Luray Caverns

The Sea Organ at Zadar, Croatia

Alexandra Stepanoff playing the theremin on NBC Radio in July 1930. She was a student of its inventor, Leon Theremin.

Console of the Great Stalacpipe Organ at Luray Caverns

The Sea Organ at Zadar, Croatia

Every musical instrument has at least a few quirks, but some were 100 percent quirky from the get-go. Here are five of the finest.

The photoplayer was a player piano on steroids, designed for use in early movie houses. It had two tracker bars (the device that reads the paper music roll), so one could be changed while the other played. The piano was attached to big sound-effects boxes on either side that held drums, cymbals, castanets, perhaps some organ pipes, and sometimes a xylophone, as well as things like train whistles, car horns, telephone ringers, and police sirens.

One person played everything, and it didn’t require enormous musical skill, just knowing how to get the piano rolls going and when to push the buttons or pull the “cow’s tails” that activated the sound-effects devices. About 10,000 photoplayers were built between 1910 and 1928. They went out of style quickly as talking pictures came onto the scene and, today, fewer than 20 operable photoplayers exist.

  To marvel at a photoplayer in action, go to youtube.com /watch?v=SF4BWllUEO0

The makers of horror and science-fiction films are forever indebted to Russian physicist Lev Sergeyevich Termen, aka Leon Theremin. While working on a Soviet government project to develop proximity sensors in 1920, he noticed that the eerie, wavering pitch they emitted changed as his hands moved closer to and farther away from the detectors.

Theremin was a cellist and quickly became intrigued by his invention’s potential as a musical instrument. In November 1920, he gave his first public concert on the device, which he called the “etherphone.” Eight years later, Theremin and three other theremin-playing soloists performed with the New York Philharmonic in short works by Handel, Mozart, Lizst, Saint-Saëns, and Rachmaninov.Despite this auspicious concert hall beginning, it was in Hollywood where the instrument really came to the fore, being prominently featured in horror flicks such as The Red House and The Spiral Staircase and sci-fi classics including The Day the Earth Stood Still and The Thing from Another World. (The theremin-sounding theme in the original Star Trek television show was actually sung by a famous studio musician, soprano Loulie Jean Norman.)

  The theremin in Bernard Herrmann’s score for The Day the Earth Stood Still: youtube.com/watch?v=3ULhiVqeF5U

Lithophones — suspended rocks that can be struck to create tones — go far back in antiquity and have been found at many archaeological sites around the world. In the 19th century, musicians and musically inclined anthropologists started to create new instruments using stones as their basis. Many resemble xylophones, such as the “Rock, Bell, and Steel Band” developed by Briton Joseph Richardson in the 1840s. Richardson and his three sons played the large instrument throughout Europe, including a command performance for Queen Victoria in 1849.

Contemporary lithophones vary more widely in appearance, with some being highly sculptural, such as Hannes Fessmann’s 2007 instrument carved from a single piece of solid stone, or conceptual, such as Jay Harrison’s circular, 24-stone, computer-programmed instrument, designed for the listener to stand in the center for a surround sound experience.

  To see and hear Richardson’s Rock, Bell, and Steel Band at its current home in England’s Keswick Museum, go to youtube .com/watch?v=tQkeYlFs1Oo

The ultimate in lithophones can’t be heard on tour, you’ve got to travel to it — the Great Stalacpipe Organ inside Virginia’s Luray Caverns. Pentagon scientist and amateur organist Leland W. Sprinkle got the idea during a 1954 cavern tour when a guide tapped a stalactite with a hammer. The stalactite’s musical properties had been known since the 1880s, but Sprinkle carried the idea further, spending three years searching out 37 ideal stalactites and shaving them down to produce specific notes.

The stalactites are sounded when struck with rubber- tipped pistons connected by electric wires to the organ’s console. They’re spread over 3.5 underground acres and can be heard throughout the cave’s 64-acre expanse. Sprinkle played the first 100 percent organic organ concert in 1957 and continued to concertize underground for many years, with records of his performances sold in the cave’s gift shop. Because Luray Caverns is a humid “live cave” where the rock formations continue to grow, the organ and its stalactites require constant maintenance and retuning.

  For a PBS NewsHour feature on the stalacpipe organ, go to youtube.com/watch?v=YXnb6QKNMPE

Croatian architect Nikola Bašić’s 2005 musical creation has just one moving part, but it’s a big one: the Adriatic Sea. Tasked with visually transforming part of a monotonous concrete seawall around the port city of Zadar, Bašić created a series of seven wide steps leading up from about 230 feet of the oceanfront. Beneath each step are five large tubes of different lengths and as the tide rises and falls, it pushes or pulls air through the 35 tubes, sounding the whistle inside each one.

The sounds are emitted through a row of small apertures on the front of the top step. Some listeners say the sounds remind them of whale songs but, in fact, the chords produced were modeled on the close harmony klapa vocal music of the Dalmatian region in southern Croatia where Zadar is located. Bašić’s Sea Organ won the prestigious European Prize for Urban Public Space design in 2006.

  See the Sea Organ at youtube.com/watch?v=pShgrfYdhrs

Quirks of the instruments

Pasatiempo recently spoke with four first-chair instrumentalists who play particularly quirky instruments — horn, oboe, bassoon, and percussion — to find out how they decided to play them, about their biggest in-performance fears, and what their “dream piece” as a soloist would be.