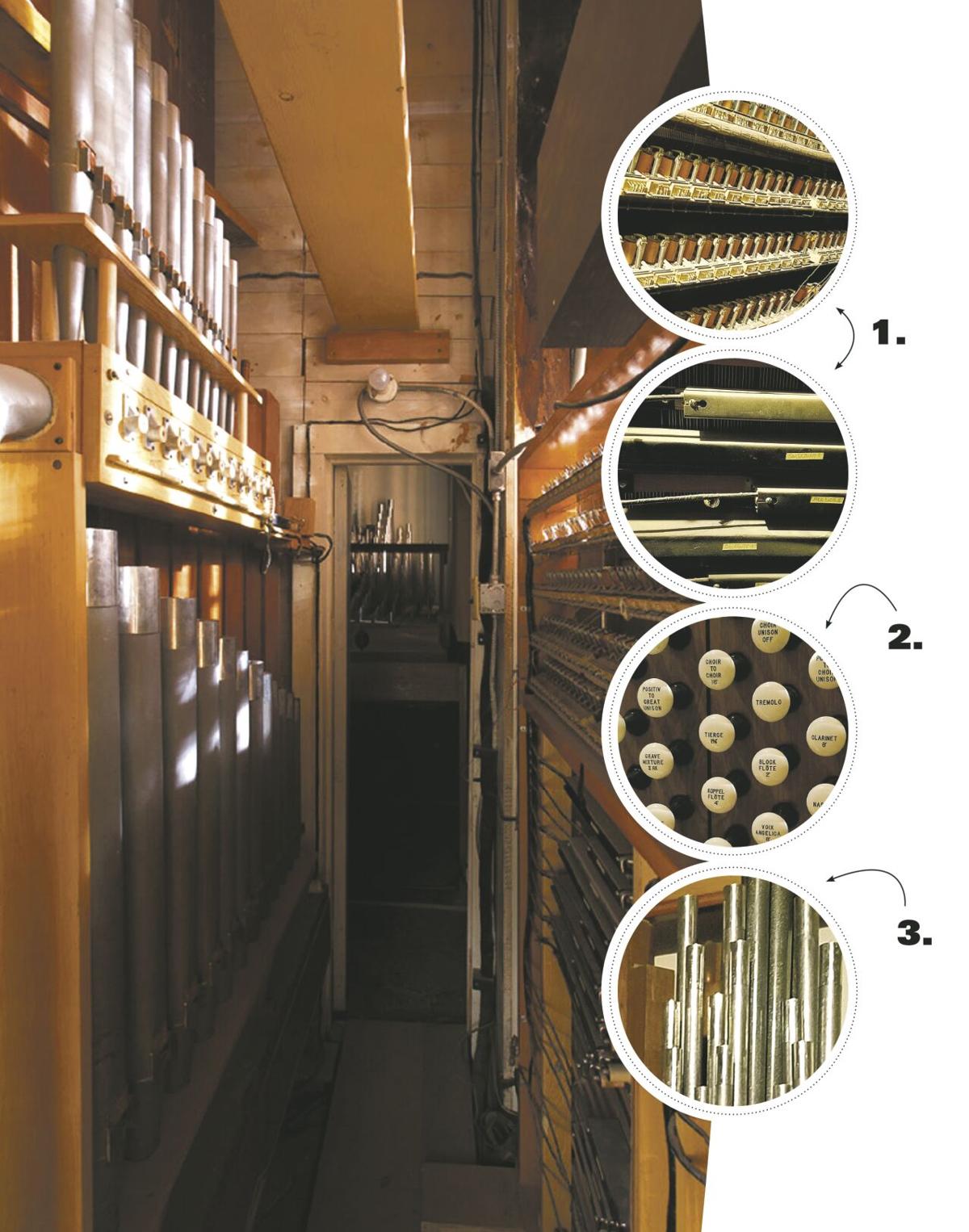 1. When the organist presses a key or foot pedal, it sends an electric signal to this switching system that activates the correct pipes.

2. The two sets of organ stops flank the keyboards (manuals, in organ speak)

3. Most of the organ’s 2,179 pipes are out of sight, hidden behind its carved wooden screen 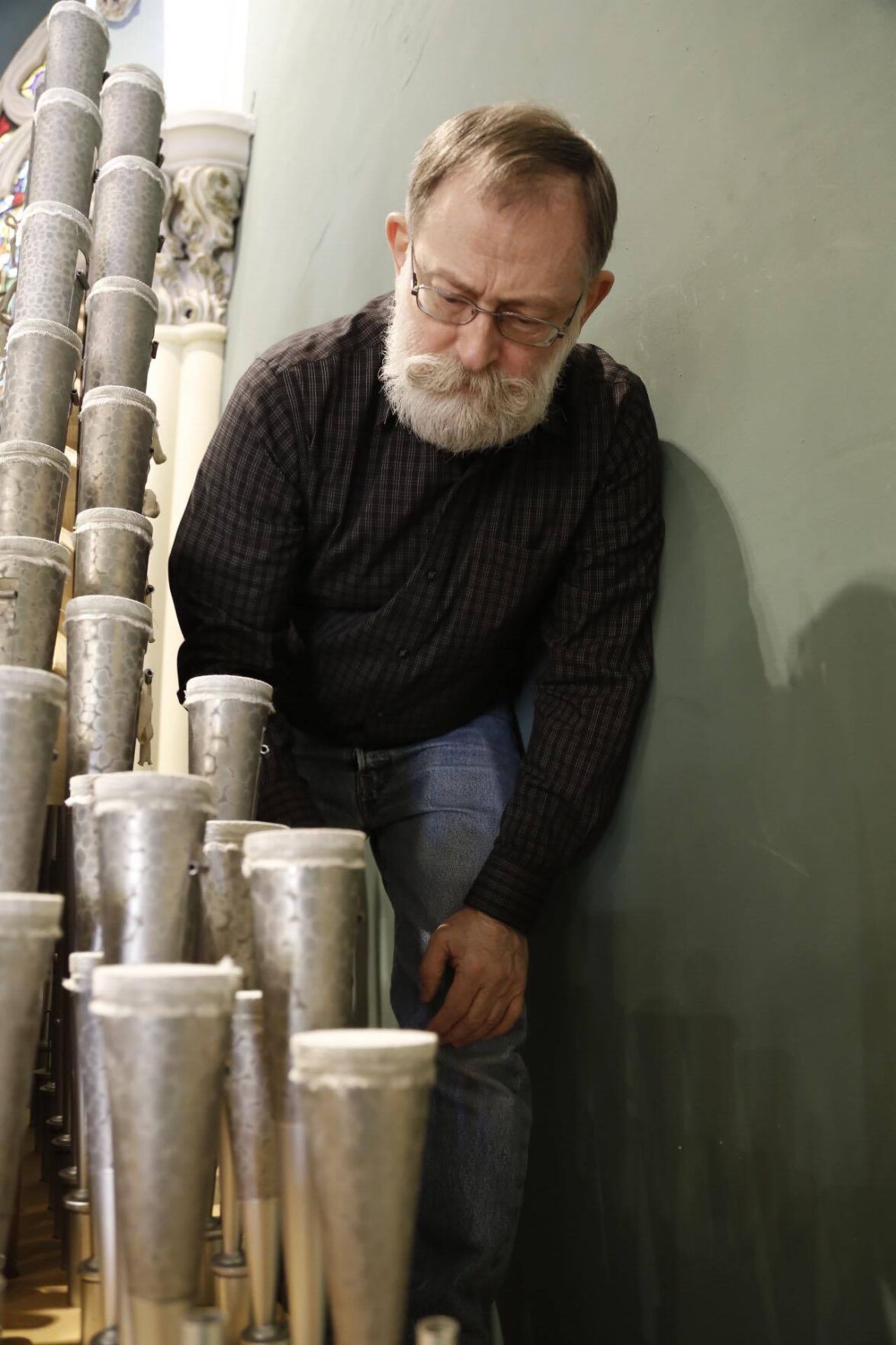 1. When the organist presses a key or foot pedal, it sends an electric signal to this switching system that activates the correct pipes.

2. The two sets of organ stops flank the keyboards (manuals, in organ speak)

3. Most of the organ’s 2,179 pipes are out of sight, hidden behind its carved wooden screen

Santa Feans will soon have a new sound to enjoy — the pipe organ in St. Francis Auditorium at the New Mexico Museum of Art is currently being renovated and should be back in tip-top order by the fall. That’s a year later than the original plan, which was disrupted by the coronavirus pandemic. The project has now resumed, with four sets of its pipes in the care of the Kegg Pipe Organ Builders in northeast Ohio.

Asked to describe the organ’s condition when he first saw it, company founder Charles Kegg replied, “I would say it was generally good but tired. This isn’t a full-blown restoration. You could think of it as a car that’s gone too long past when a major maintenance service was due.”

One of the first steps was a deep cleaning. “The organ was very dirty inside,” Kegg said, “but, fortunately, it was a light, fluffy kind of dust, so it was easier than usual to vacuum up.”

The project also involves restoring the mechanisms that control the instrument’s volume, constructing a new wooden console (the case that houses the keyboards, pedalboard, and stops) that is more in keeping with the auditorium’s interior, and replacing all the wiring.

“The current low-voltage wiring dates back to 1957,” Kegg explained, “and it’s no longer up to building codes because the wires are wrapped with cotton fabric, and it doesn’t have any fusing.” In fact, it was the wiring that led to the museum’s 2014 decision to pull the plug on the organ, if temporarily, since it was giving off sparks while being played.

In organ terminology, keyboards are called manuals, and the pipes are arranged in groups called ranks. The pipes in a single rank make the same type of sound, called a timbre, but at different pitches, making up scales. The St. Francis Auditorium organ has 2,179 pipes, a relatively small number in the pipe organ world, that are organized into 37 ranks. Each rank is activated by pulling out a stop (a button that the musician pulls, not pushes). That’s where the popular phrase about “pulling out all the stops” originated. (In performance, it would be highly unusual for an organist to actually do so; it’s more a metaphor than an actual playing technique.)

Another aspect of the project is restoring the organ’s reed pipes, which are the ones now at the Ohio workshop. “Most organ pipes are called flue pipes. They’re like big whistles, with no moving parts,” Kegg said. “But some others have vibrating reeds that are made of brass, and they need to be reconditioned from time to time.” Many pipes are named after the instrument they sound like, so there are clarinet, oboe, and English horn reed pipes, as well as flue pipes named after the violin, cello, and viola da gamba.

When the restoration is finished, the organ will add a timbre the music community currently lacks. “Your First Presbyterian Church has a very fine organ made by the C.B. Fisk company,” Kegg told Pasatiempo. “Where it really excels is in Baroque music. The Museum of Art organ has a much different sound palette, one that’s ideal for Romantic-era music, so it will be a nice complement on the Santa Fe concert scene.” The church has been offering online performances during the pandemic; Linda Raney, its music director, says they hope to begin offering hybrid events, with in-person and virtual options, in July.

(Charles Brenton Fisk had a local connection. At age 19, he dropped out of Harvard University to enlist in the Army and ended up working as a Manhattan Project technician in Los Alamos. Fisk modeled his organ-company leadership on the collaborative work style of his bomb-building project teammates.)

When the first organ concert at St. Francis Auditorium happens later this fall, Santa Feans will be hearing the instrument almost exactly as it was heard 84 years ago. The only real difference, Kegg noted, is that a set of “echo pipes” were originally placed in the balcony, which must have made a charming musical effect. In 1957, they were moved to the stage to join the rest of the pipes; they’re all located on the left side of the stage when viewed from the seats.

Kegg traces his fascination with pipe organs back to the 1967 film Camelot, not because there’s an organ in the movie but rather the venue where it played. “I was 11 years old, and my parents took me to see it at the Palace Theatre in Canton, Ohio. It’s an ‘Eberson atmospheric theater’ designed by John Eberson to look like a Moorish garden with stars and clouds and all that. When the music started, and the organ console rose up out of the orchestra pit, I was mesmerized.”

The Philadelphia-based Wyncote Foundation is contributing $200,000 to the restoration project. When it’s completed, the organ will be named after Frederick R. Haas, one of the foundation’s trustees. Haas studied organ performance at the Oberlin Conservatory of Music; he and the foundation are national figures in historic organ preservation.

No word yet on whether the NMMoA will follow the guidelines originally laid down for the organ’s use by its first director, Edgar Lee Hewitt, in May 1937: “This instrument is to be used only for music of high character. Neither organ nor chapel may be used for any undignified performance. Specifically, this would include ‘jazz’ or any vulgar type of entertainment.” ◀

A brief history of the organ in St. Francis Auditorium

The organ in St. Francis Auditorium was donated to the museum in 1936 by James and Ruth McNary. They were music lovers who met in Las Vegas, New Mexico, when James moved there in 1898 to teach at what is now Highlands University. Ruth had studied piano, pipe organ, and violin for seven years at the New England Conservatory of Music; James went on to have a career that Horatio Alger might have envied, while still singing and directing choirs as time allowed.

In 1902, McNary bought the Las Vegas Daily Optic, and ran it for four years. The McNarys then moved to El Paso, Texas, where James worked for the First National Bank, becoming its president in 1916. In the same year, the McNarys built a new home that had a music room fitted out for a large pipe organ.

McNary soon branched out into timber investments, establishing a lumber mill in Louisiana and naming its company town after himself. The town of McNary, Louisiana, grew to have more than 3,000 residents and sported a church, school, post office, hospital, swimming pool, and a large theater.

By 1923, the company was running out of trees to cut, so McNary opted for a novel solution. He bought a bankrupt sawmill in north-central Arizona and then moved his Louisiana sawmill’s equipment and almost 800 employees and their family members west to the newly renamed town of McNary, Arizona. He and his family moved there permanently in 1928, selling their El Paso home but putting their 10-ton organ into storage until a new home could be found for it.

At the time, McNary was a board member at Edgar Lee Hewett’s School of American Research, and the McNarys began discussing moving the organ to Santa Fe in 1935. At first, McNary proposed selling it, but then he decided to donate it outright in 1936. The dedication recital in its new home took place on April 25, 1937. — M.T.