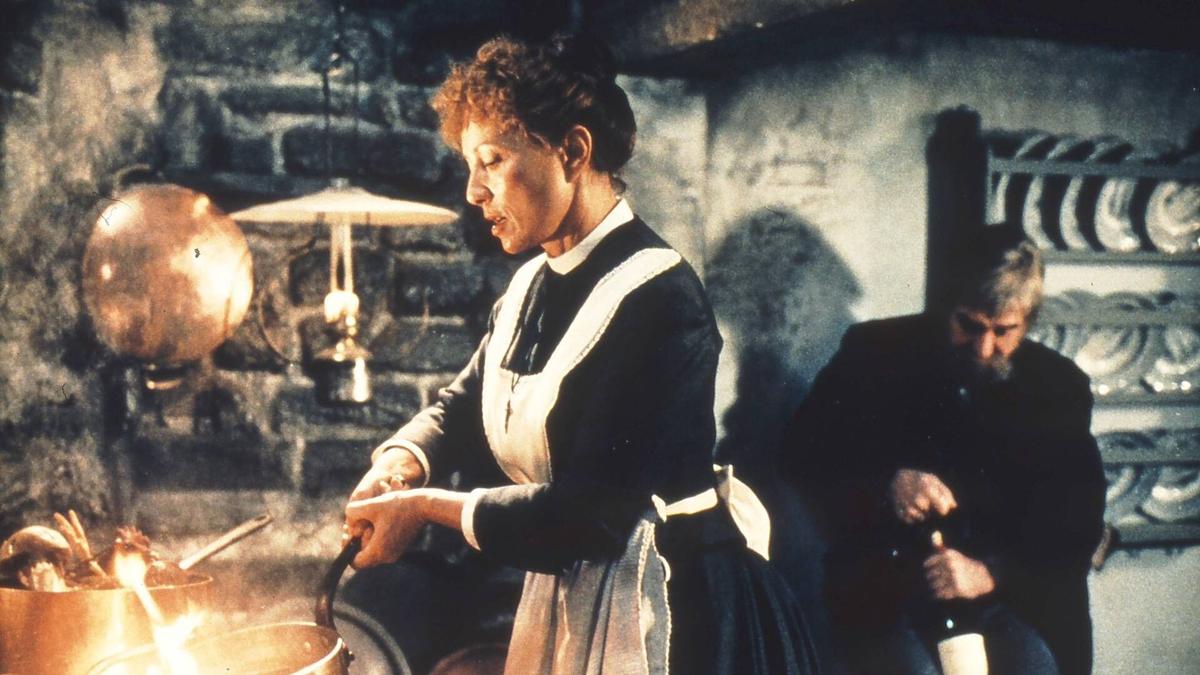 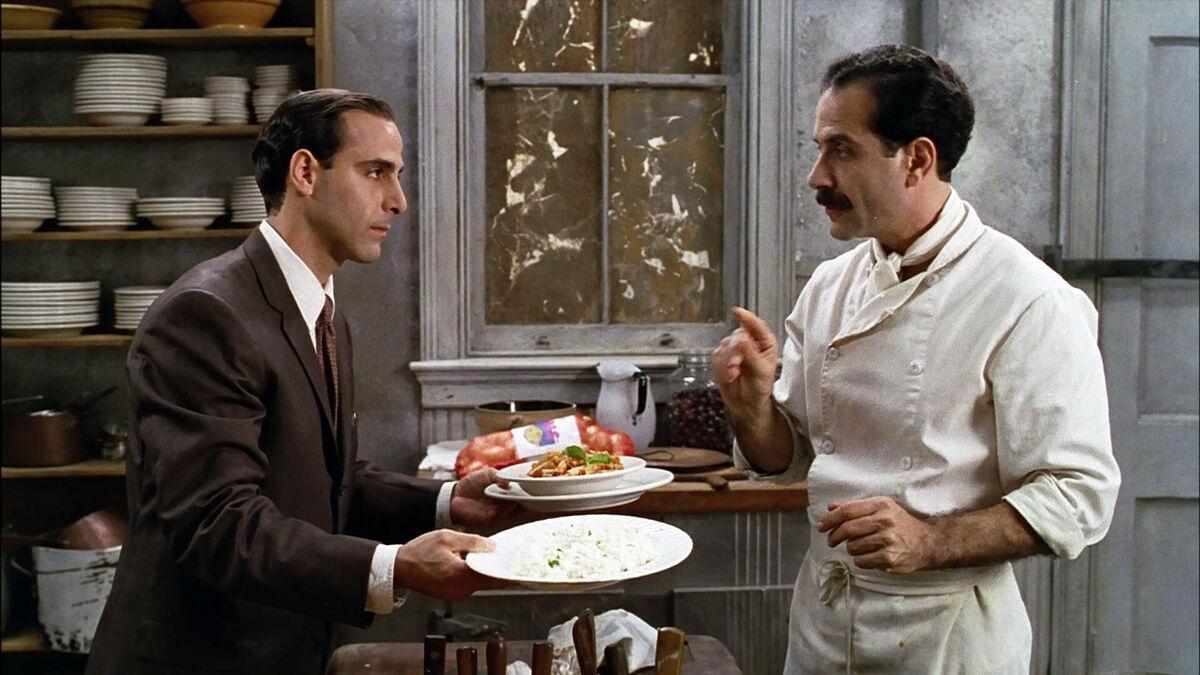 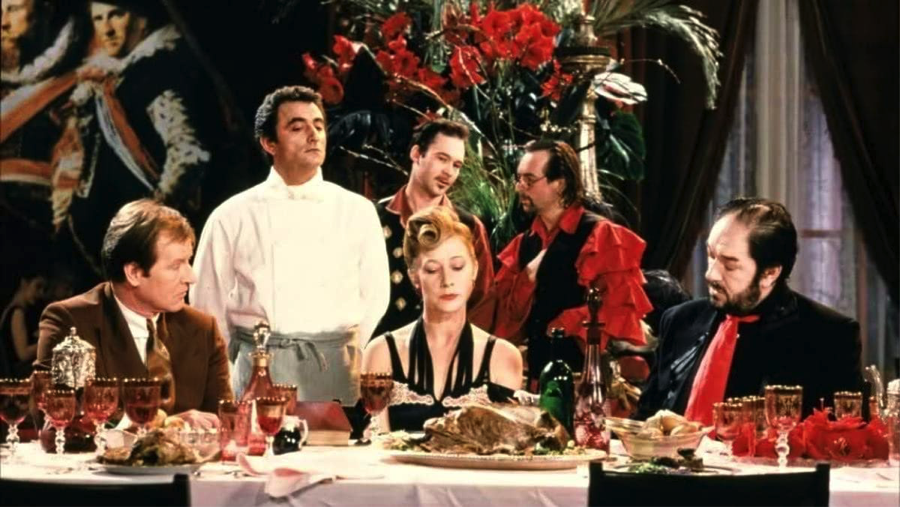 The Cook, the Thief, His Wife & Her Lover 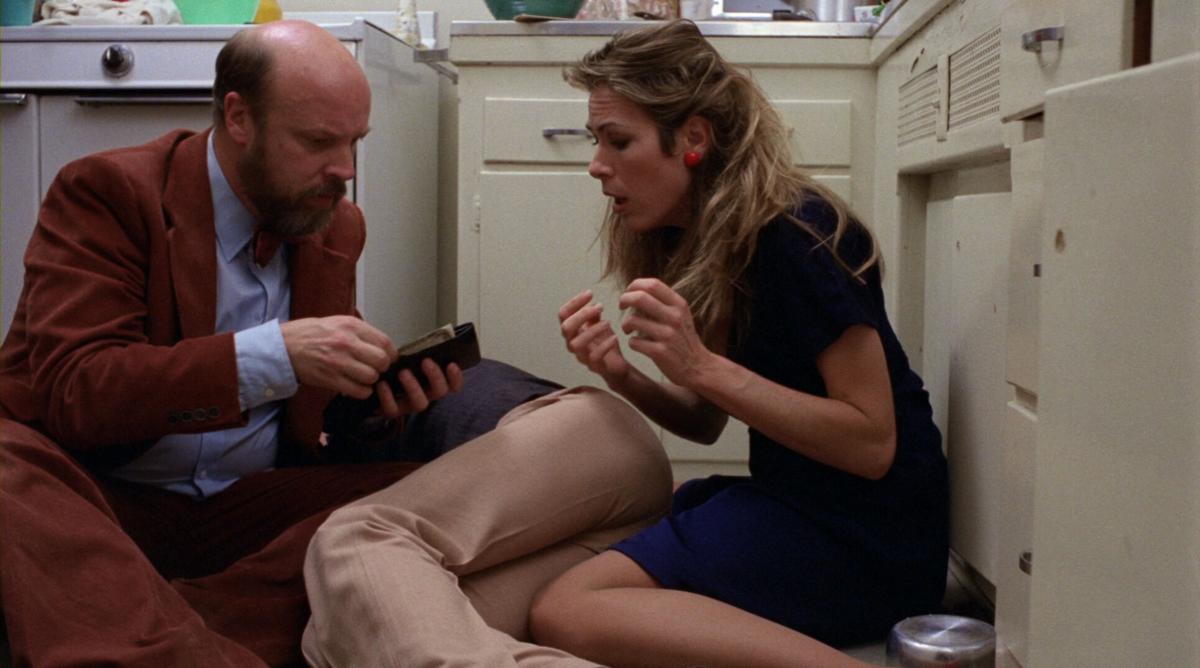 The Cook, the Thief, His Wife & Her Lover

Babette’s feast is a seven-course, once-in-a-lifetime meal prepared for the elderly members of a religious sect on Denmark’s dour western coast. The daughters of the sect’s deceased founder now tend to their father’s aged flock with cooking aid from Babette, a Frenchwoman who fled Paris’ deadly Communard Uprising of 1871.

She’s lived among the pious for 14 years, never disclosing that she was formerly the head chef at a celebrated Parisian restaurant. When she unexpectedly wins 10,000 francs in a lottery, Babette decides to use her winnings to make “a real French dinner” in honor of the 100th birthday of the sect’s founder.

The seven dishes she prepares are turtle soup, buckwheat pancakes with caviar and sour cream, quail and foie gras in puff pastry shells with truffle sauce, an endive salad, rum-soaked sponge cake with figs and candied fruit, cheeses and exotic fruits, and coffee, accompanied by six wine pairings. Scandalized by the feast’s extravagance, the sect members decide to consume it politely but without comment. It soon works on them in wondrous ways, however, with decades of the sect members’ personal grievances and perceived injustices vanishing in the glow of fine food and well-chosen wine.

The film sometimes hews dangerously close to Hallmark Channel sensibilities, with all issues neatly resolved, but it’s redeemed by its austere setting and ascetic characters, touches of sly humor, the quality of the acting, and the realistic detail shown in preparing some of the dishes, especially the quail. (Vegetarians are hereby warned.)

In this sentimental classic of gastro cinema, two Italian immigrants operate a flailing eatery called Paradise, in 1950s New York City. Primo (Tony Shaloub) is head chef and a true gourmet, loathe to Americanize his authentic dishes for unsophisticated palates. His younger brother, Secondo (Stanley Tucci), attempts to keep the doors open while pacifying the irascible Primo. They’re on the verge of foreclosure when a rival restaurateur (played by an almost terrifyingly exuberant Ian Holm) offers a helping hand in the form of a celebrity dinner guest. Although it’s never clear how this might save them, Primo and Secondo prepare a feast to beat the band.

Despite many boisterous scenes of food, drink, and music, Big Night is a quiet story about the ways two brothers have adjusted to life in a new country. As he so often does in his roles, Shaloub (The Marvelous Mrs. Maisel) disappears into the heavily accented character of Primo, an Old World charmer. Secondo is a wannabe city-slicker, played by Tucci with big, panicked eyes and a short fuse that’s a little funny and a little scary. Big Night is stuffed with stars who turn out impeccable performances, including Isabella Rossellini and Minnie Driver as unwitting romantic rivals, and the singer Marc Anthony as a busboy who steals every scene he’s in, despite never uttering a single line of dialogue. Comedy/drama, Rated R, 109 minutes, Kanopy — Jennifer Levin

Nights at Le Hollandais gourmet restaurant are filled with sumptuous meals. Tables overflow with a cornucopia of fruit, meat, and vegetables, all fancifully prepared in a vast kitchen laden with hanging pots and pans, where ovens and stoves send up clouds of steam. The dining room is lavishly decorated with gilded ornamentation, red velvet curtains, and portraits of apparent aristocrats. It’s opulent but also ostentatious, befitting the personality of its boisterous boor of an owner, Albert Spica (Michael Gambon).

Spica, the “thief” of the title, is an obnoxious lout who rules his restaurant with an iron fist, tormenting his staff and his wife, Georgina (Helen Mirren), whose disdain for him is palpable. Georgina tolerates his numerous attempts to embarrass her in public, but she’s the instrument of his ultimate demise. Georgina has a secret lover, a kindhearted and intelligent bookseller named Michael (Alan Howard). And she has the sympathy of Le Hollandais’ abused staff, with whom she plots a delicious end to Spica’s reign of terror.

Helmed by artist and filmmaker Peter Greenaway (A Zed and Two Noughts, Prospero’s Books), who lends his knowledge of painterly composition to every frame, The Cook, The Thief, His Wife & Her Lover is a feast for the eyes. It’s awash in vibrant colors of blood red and luminous green light, and set to a steady, string-driven score. The story takes place in an indeterminate time, which enhances its allegorical nature. The interior world of Le Hollandais, the primary setting, is rife with homages to times long past — from paintings that recall the work of the Dutch Masters, to the soprano kitchen boy, whose singing harks back to the days of the castrati.

It isn’t a tale of food so much as one of gluttony and the excesses of the filthy rich. Take your place at the table where revenge is served not cold but steaming hot. Crime/drama, rated NC-17, 124 minutes, Amazon Prime, Vudu — Michael Abatemarco

In the cult almost-classic Eating Raoul, the true object of desire at the dining table is other people, not the beef or fish. The aptly named Mary Bland (Mary Woronov) cannot keep men off of her. Everyone desires her, and their constant attempts to engage her without consent are slapstick in tone and reminiscent of the work of director John Waters.

Bland and her husband, Paul (actor and director Paul Bartel), decide to use Mary’s sex appeal as part of a ploy to make some money that they can put toward a new restaurant. Their plan is simple: Mary poses as a fantasy sex worker, and Paul kills the men she has lured into their home. The closest we get to watching Paul actually cook is when he hits perverts over the head with an iron skillet, instantly killing them. The Blands then sell the corpses for money, reinforcing the notion that human bodies are to be craved instead of food. Only Paul seems to have a taste in wine and, as a result, no taste for his long-legged wife.

Eating Raoul moves from farce to examination of perversion carefully. The film is just whimsical and funny enough to sell its odd story. It’s a black comedy, but it takes its coloring cues from the swingers of the 1960s, and the contemporary Los Angeles it captures remains upbeat ,even though it’s under siege with violence and a lack of morals. Comedy, Rated R, 90 minutes, HBO Max  — Jason Strykowski◀