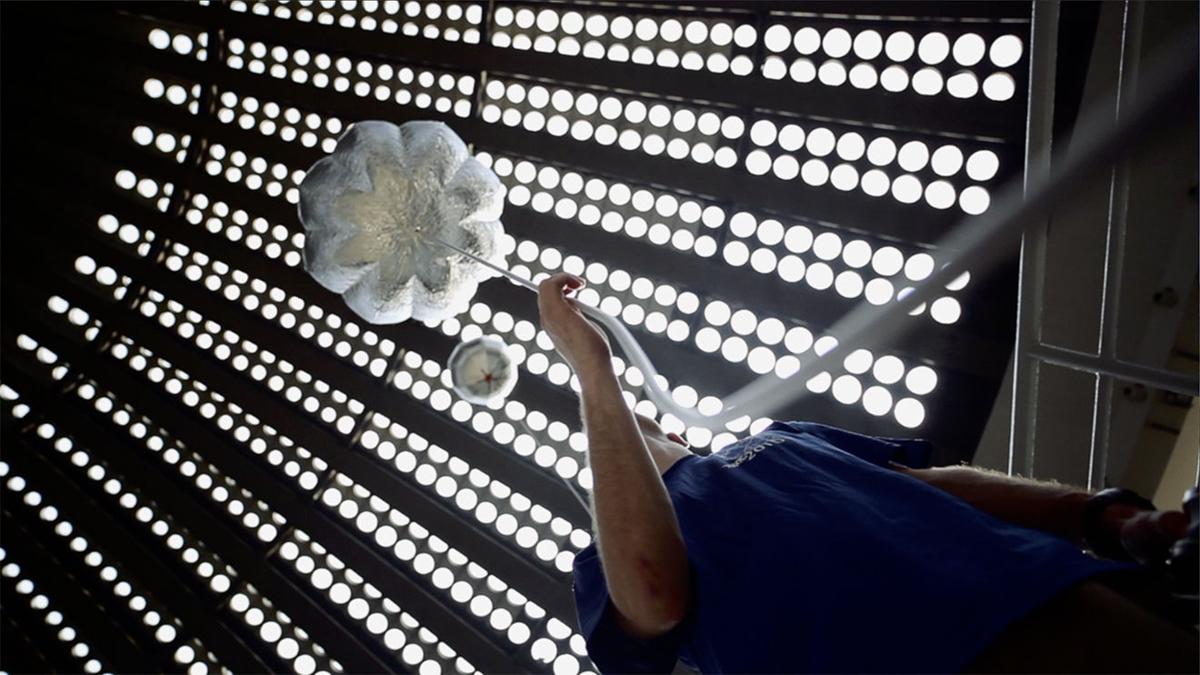 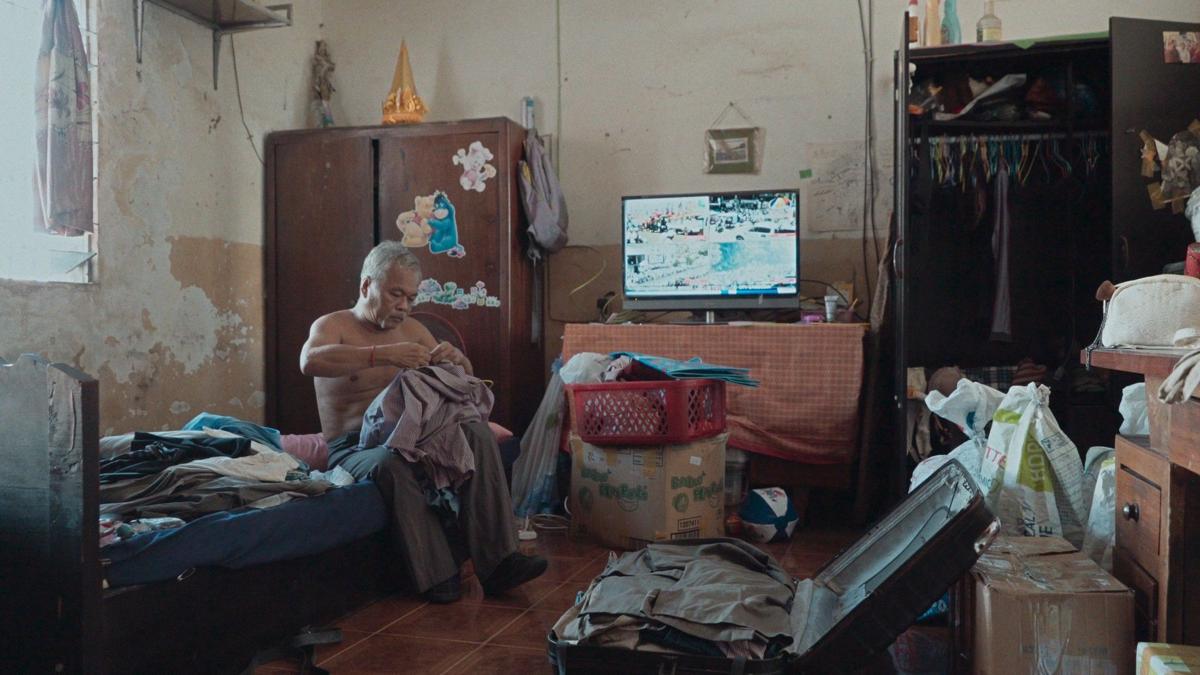 Scene from Last Night I Saw You Smiling.

Scene from Last Night I Saw You Smiling.

The realm of the documentary film, as represented in the offerings of the Santa Fe Independent Film Festival, is robust and varied. The first here tells the story of a veteran Cuban musician. His enthusiasm, and the easy, creative power of his music, stand in stark contrast to the misery — and sometimes cheerfulness — of the second film’s nearly 500 residents who are being evicted from their apartment building in Phnom Penh, Cambodia. The next three films are tied together only by their excellence, offering profiles of a beekeeper in Hawaii; the Albuquerque winner of an indoor model airplane competition; and New York City’s rare-book dealers.

Eliades Ochoa: From Cuba to the World

Documentary, not rated, 100 minutes, in English and Spanish with subtitles

This is a multifaceted portrait of musician Eliades Ochoa, whom the actor Benicio del Toro calls “the Cuban Johnny Cash.” The actor, who is a fan, appears in Cynthia Biestek’s film, but Ochoa tells his own story. The 71-year-old was born in Loma de la Avispa, Songo La Maya, the son of peasants who eked out a living from the land. As a boy, he practiced the tres (or Cuban guitar) every chance he got. He even made a guitar of his own, fastening lengths of fence wire on a board, using a pencil as a bridge, and accompanying himself as he sang.

As Ochoa became more accomplished, his parents decided that they should relocate to the city, where he might become a professional musician. So, in 1958, they sold their land and moved to Santiago de Cuba. His father bought Ochoa his own guitar and he began to play in bars and on the streets.

The director intersperses his story with wonderful vintage film clips of Cuban life and of people performing the beautiful, repetitive, heavily rhythmic call-and-response music. Ochoa tells us that in those days he performed “in the same country style in which I still interpret my songs.” The filmmaker traces Ochoa’s career through the decades, until he’s working with singer Compay Segundo and, from 1997, with the popular group Buena Vista Social Club.

Ochoa has a splendid and distinctive technique of picking and strumming the tres. “This has been my faithful pal since childhood,” he says, patting the instrument he holds in his lap. The veteran bluesman Charles Musselwhite, who has performed and recorded with Ochoa, offers high praise for his friend and his roots. “I don’t know if I’m right, but I bet the people in Havana would rather you didn’t know about those guys in Santiago, ’cause that’s the real deal, and they blow everybody else away.” 11 a.m. Thursday, Oct. 17, and 3:10 p.m. Oct. 18, The Screen

Last Night I Saw You Smiling

Documentary, not rated, 78 minutes, in English and Khmer with subtitles

In his newest film, Kavich Neang tells the story of the White Building apartment house in Phnom Penh, Cambodia, which, in 1975, was emptied of its residents when the Communist movement Khmer Rouge took power. At the end of that decade, people returned and it grew to become a vibrant community of civil servants and artists. But now we are seeing a new evacuation. In May 2017, the residents are told that a Japanese company bought the White Building. Its nearly 500 families have to leave their homes.

The film’s character is realistic and gritty, but with no gratuitous emotion. In fact, nothing is very exciting. The focus simply alternates between the people dealing with, and talking about, the situation.

There is an artistic cinematographic moment when Neang shows a side view of the building’s open stairs as people carry down a large, wood-and-glass cabinet. The stairways’ strong diagonal lines are framed in two massive concrete rectangles of the two floors shown. The next is similarly compelling, showing jutting balconies surrounded by concrete that was white years ago.

A woman sitting on the floor of her room complains, “The way we’re being forced to leave reminds us of the [Khmer Rouge prime minister] Pol Pot regime.” She looks at a photo on her phone of the building the way it used to be, with the palm trees out front that are no longer there. “It used to be so beautiful,” she says with a wistful smile. 11 a.m. Thursday, Oct. 17, and 3 p.m. Oct. 18, Violet Crown

Bees are at the heart of director Sarah Christman’s story, which is set in the shadow of the Mauna Kea volcano in Hawaii. She anchors the action on 10-year-old Manu and her mother, who is collecting wild honeybees in order to breed disease-resistant colonies. “This is a hive I split into three,” she tells her daughter. “I do see an empty comb here; I wonder if there’s a queen.” Wearing no gloves or veil, she calmly picks up combs full of bees. She finds the queen; it’s crawling on her hand.

In the midst of this, Christman cuts to protesters of a NASA plan to install a large telescope there. It’s sacred ground for the native people. One of them is Manu’s activist father. Then, Manu’s mother is climbing up in a tree. She asks Manu for a pruning saw. “Nice big swarm,” she says as she works to get it into a plastic bag. “Come, bees. Come on, my darlings. We’re moving.”

Eventually, we sense an order to Christman’s storytelling. The telescope people talk about the importance of finding another home besides Earth and then Manu speaks about the swarming bees: “They’re finding a new place to live, somewhere. They’ll have scouts first go off and look for some homes.” 1:30 p.m. Thursday, Oct. 17, and 11 a.m. Oct. 18, The Screen

Director Phil Kibbe dives into a portrayal of a competitive indoor sport that many of us have never heard of. It’s called F1D and it involves people designing, making, and flying model airplanes. But these are nothing like you’ve seen before. They’re like large gossamer insects made of balsa and ultra-thin Mylar. And one rubber band.

Teams from all over the planet have competed in the F1D Indoor World Championships for 60 years. Every model plane is powered by that rubber band, and the winner is determined solely on duration of flight. The rules limit the wingspan to about 25½ inches, and the model must weight at least 1 gram, not counting the rubber.

We’re taken to the 2014 championships in Romania. The flying site is in a cavern 400 feet underground and 210 feet tall. In that place, the hypnotically slow-flying aircraft look downright otherworldly.

He’s been flying F1D for 11 years. He also runs marathons. In one event, you want to maximize your time and in the other you want to minimize it. In both, weight is pretty important. “In F1D, the lighter the better,” Sanborn says in Float. 2:30 p.m. Thursday, Oct. 17, and 1 p.m. Oct. 18, Jean Cocteau Cinema

“The library will endure; it is the universe.” That quotation from Jorge Luis Borges in The Library of Babel invokes the treasure of our world of books. Director D.W. Young presents a loving portrait of that world, focusing especially on rare-book dealers and collectors and their stories and humor.

One dealer tells us he was at the New York Book Fair with a friend who is a novelist from Spain. “He almost started crying when I showed him the fourth or fifth edition of Don Quixote de la Mancha, published in Brussels in 1611,” the dealer says. “But then he really cried when he saw the first edition of Ian Fleming’s Casino Royale, inscribed by him, for $130,000. That would make anyone cry.”

The Booksellers is pleasurably anchored in stories that reveal the personalities of the real (not Barnes & Noble) bookstores and their owners and customers. One engaging seller is David Bergman, whose apartment is just stuffed with bookshelves and books. He points to one and says, “Here’s one book on the catacombs of Rome that’s so heavy that I haven’t taken it off the shelf since I put it on the shelf 15 years ago. I brought it to one fair and I said ‘never again.’ So there it sits, you know, until someone comes in and says, ‘Do you have anything on the catacombs of Rome, by any chance?’ ”

The filmmaker punctuates the story with clips from book-dealer-related films — including the scene in The Big Sleep when Humphrey Bogart tries to act nerdy in a bookstore. The director interviews Nancy Bass, whose grandfather founded the wonderful Strand Bookstore in New York. On perhaps the other end of a spectrum, he talks with Syreeta Gates, who archives and preserves hip-hop zines like XXL, The Source, and Vibe.

At one point, there’s a table discussion among eight booksellers. One of them mutters, “It’s a horrible business.” But they all love it. 12:30 p.m. Oct. 20, The Screen ◀