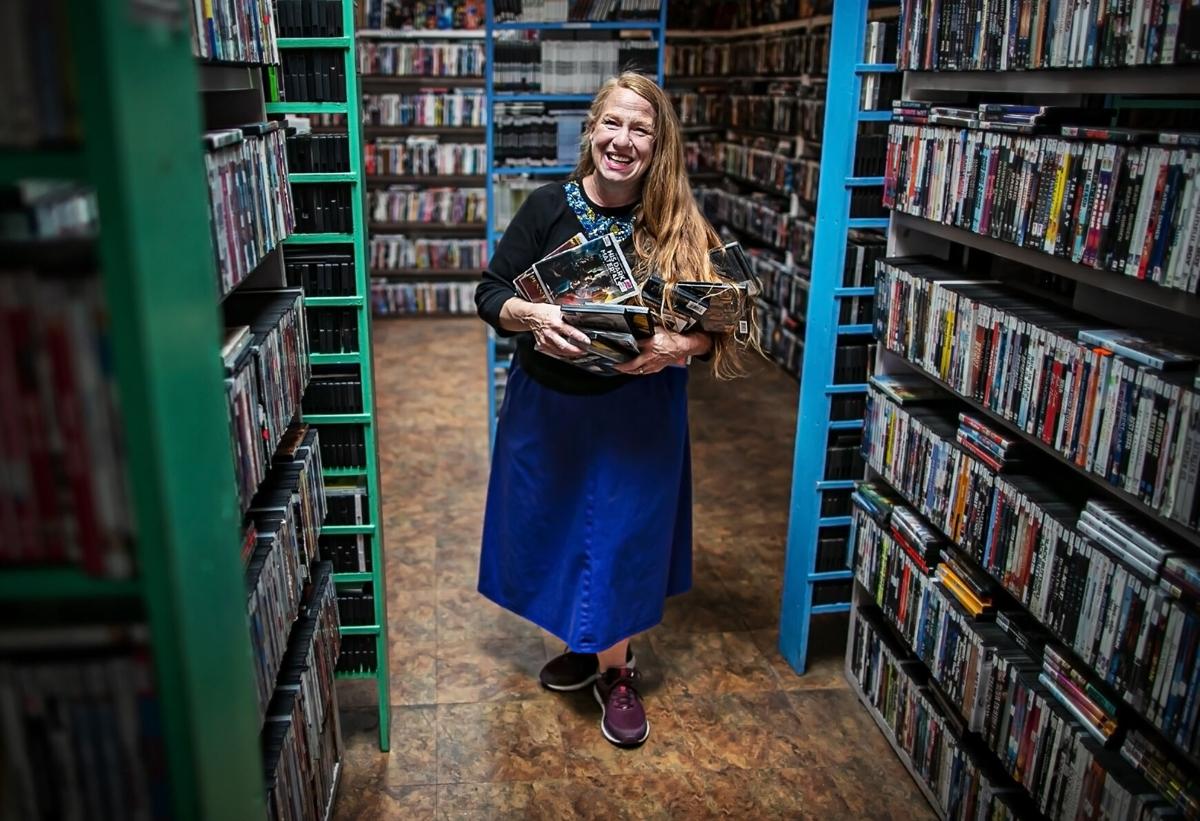 Lisa Harris, co-owner of Video Library, which turned 40 this year and still does a brisk business in movie, TV show, and foreign film rentals. 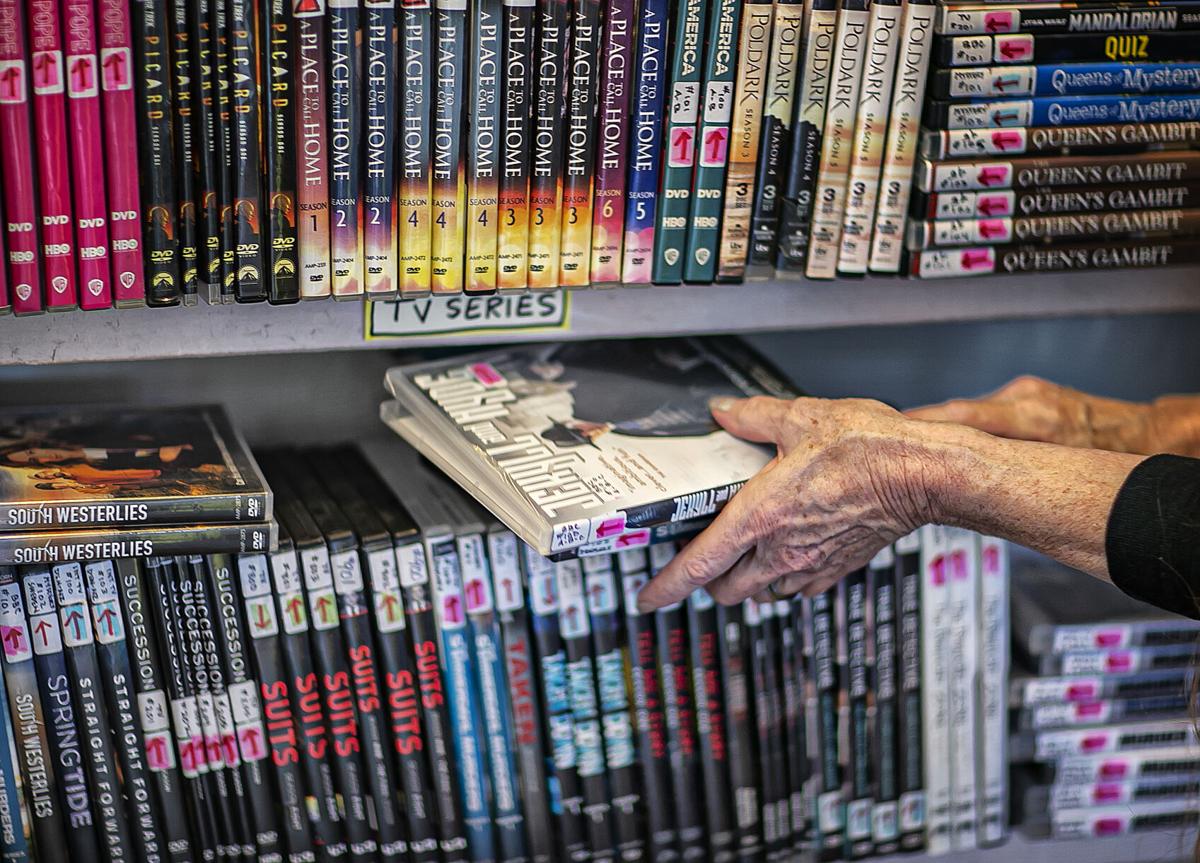 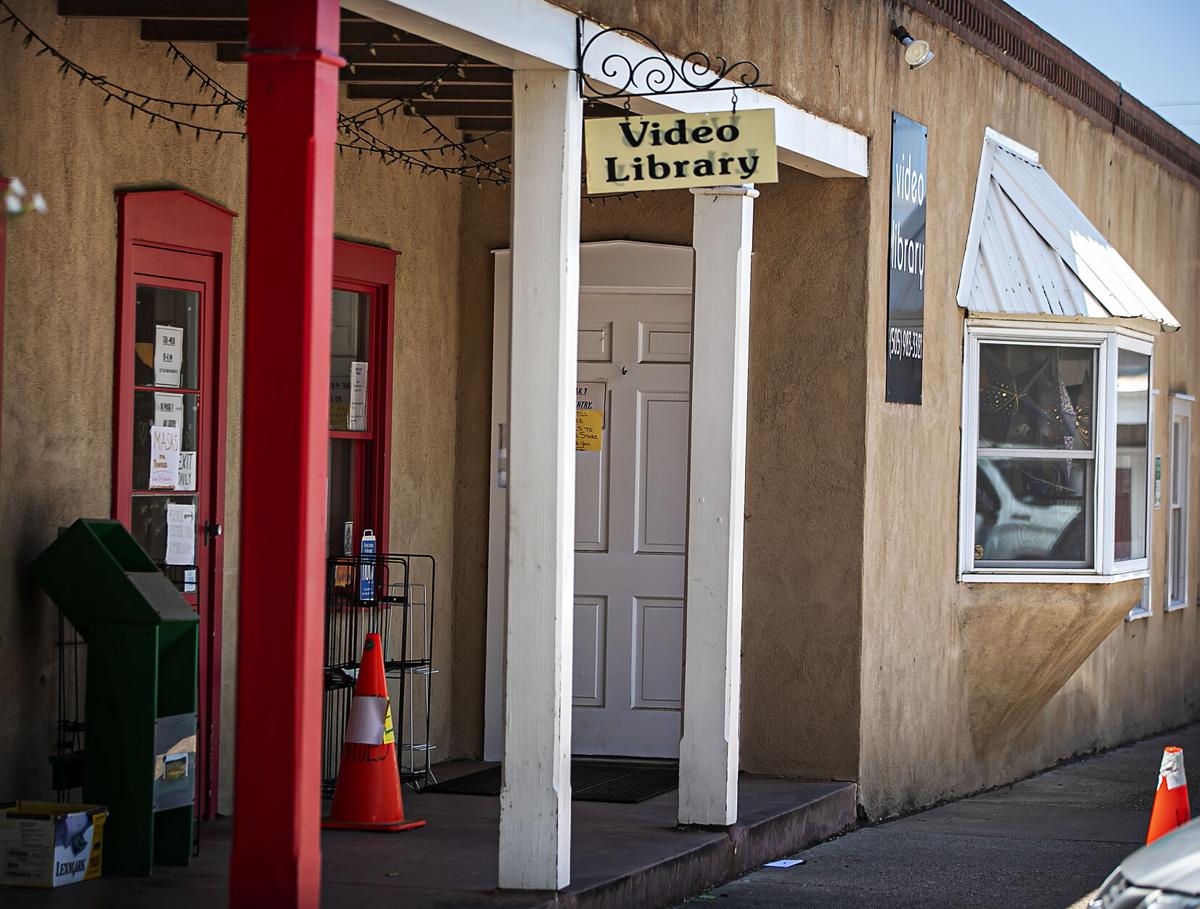 Lisa Harris, co-owner of Video Library, which turned 40 this year and still does a brisk business in movie, TV show, and foreign film rentals.

The chatter from the checkout counter is muffled by a recently installed plexiglass barrier, now standard in many retails stores. It’s hard to tell what Lisa Harris and her customer are saying.

“What was the name of that actress that starred in Woman on the Run?”

Or something like that. No matter. You’ve moved on to the F’s: Flatliners, The Fly, The Fog, Forbidden Planet.

Simply browsing in a bonafide video rental store is a pleasure you can find in very few places in America nowadays. Log on to Netflix, Amazon Prime, Hulu, and a host of other streaming services, and you’ll see a lot of the same popular titles that, in the not too distant past, lined the walls of video store chains like Blockbuster. But those stores were never suited to the discerning tastes of true cineastes. 4D Man? Nope. And reaching out and holding the DVD case in hand, flipping it over to read the description, is a diversion that can’t be replicated virtually.

America’s taste in movies hasn’t changed. How we watch them has. Santa Fe is one of the few places left where you can while away an afternoon immersed among the racks, questing for that one title.

Now, the G’s: Galaxy of Terror, Gattaca, Ghosts of Mars. Rows of movies are stacked horizontally on top of vertical rows of more movies in a maze of shelving, with lots of nooks and crannies.

Video Library is something sacred. It’s a place where movie lovers go to commune and awaken the imagination and the soul.

“It’s a library, damn it,” says longtime customer Kit Baum. “They don’t have the Dewey Decimal system, or whatever it is, but it doesn’t matter. Lisa and her husband have such an encyclopedic knowledge.”

And it’s the only video rental store in town, and seems to be the oldest in the nation. And there are thousands of titles, if not tens of thousands. It celebrated its 40th anniversary on Aug. 9.

“If you had told me when I first opened the store that I’d still be doing this, I would have been like, ‘My whole life?’ Now, it’s so funny, here at this end of it, trying to maneuver the waters and just stay in there."
— Lisa Harris, Video Library co-owner

“I’m not really computer proficient, as you might know since I don’t have one at the store,” says Harris, who co-owns Video Library with her husband, Casey St. Charnez. “But I’ve asked people who are good with computers, and nobody’s been able to come up with anything older. There’s a place in Ohio saying they’re the oldest, but they opened in ‘82.”

Louisiana natives Harris and St. Charnez navigated the transition from Betamax rental machines to VHS machines and VHS tapes (which they still rent) to DVDs and blu-rays, and even survived a temporary closure in the wake of the coronavirus pandemic.

“If you had told me when I first opened the store that I’d still be doing this, I would have been like, ‘My whole life?’” Harris says of the store, which some affectionately call “the Vid.” “Now, it’s so funny, here at this end of it, trying to maneuver the waters and just stay in there.”

A place for movie lovers

Looking for Mr. Goodbar (1977), Hearts of Fire (1987), and the Tom Waits concert documentary Big Time (1988). None are on DVD, but Video Library has them on VHS, along with many other films that have yet to make it to DVD. Perhaps not surprisingly, many Vid customers held on to their VHS players, while the rest of us passed them on to Goodwill.

“You’d be amazed by what hasn’t come out on DVD,” says St. Charnez.

In the early 1980s, the sister of a friend of Harris started one of the first video-rental businesses in the nation in Salt Lake City, Utah. Harris and St. Charnez, who has a Ph.D. in film and is a former reviewer for Pasatiempo, are longtime movie buffs.

“It was the first we ever heard of renting movies,” Harris says of the Salt Lake store. “We thought, ‘If we don’t do this, were going to be the ones in front of the counter, and they’re not going to be stocking the things we want to see.’”

The couple’s first store was located at Cerrillos Road and St. Francis Drive. Harris remembers opening day. People were knocking on the door. The idea that you could bring a movie home was novel, but it didn’t take long for the store to take off: They also rented the machines.

“They came in these little suitcases, and you’d have to teach them how to hook it up to their TV,” she says.

They opened a bigger store on Cerrillos in 1985, and at the height of the video rental craze, they operated several stores. But the drive back and forth from store to store was too much for Harris. In 1993, they settled into a single location on Marcy Street, which they maintained until losing their lease in 2014.

"What I love about Video Library is the personal contact, and not just with Lisa or Casey but everybody in there."
— Kit Baum, customer

Then came a final move to the Harvey Center on Paseo de Peralta, where they’re open from noon to 6 p.m. Friday through Monday.

You might not find 30 copies of Avengers: Endgame (2019), but they do stock more than one copy of the camp classic Flash Gordon (1980). (In fact, when Harris and St. Charnez were married on the air by local radio personality Honey Harris in 2012, they chose Queen’s Flash Gordon theme as their wedding song.)

The last best video store and the pandemic era

In 2018, streaming entertainment took its toll on Video Library and pushed Harris and St. Charnez to start a GoFundMe page, which is still active (https://gofund.me/6d57a33a). Although they don’t describe the purpose on the page, a post from Harris from August, 2019, states “Thanks to our many supporters, the Vid has now lasted a good 8 months longer than we ever expected.” Before then, she thought that reaching the 38th anniversary was the “most improbable of possibilities.”

Then came the pandemic, and the Vid was forced to close its doors.

“Even before we opened back up, people who knew how to get a hold of me were leaving me messages. ‘Just put anything in a bag and hang it on the back door. I’ll take it.’”

Harris took them up on the request, but only after the governor allowed partial reopenings, and she disinfected all items beforehand and upon their return.

Video Library reopened with modified hours in June 2020. But now it’s just Harris in the store. St. Charnez is the buyer — or better, the curator.

“I worked as the home video editor for Leonard Maltin’s Movie Guide from 1986 to 2015,” St. Charnez says. “There was something like 20,000 titles. My job was to appraise what had been released on home media. I was on every mailing list and got a lot of PR stuff.”

When the book went out of print, St. Charnez adapted his research tools to benefit their customers.

“It’s very helpful to the Vid for me to have all that Maltin knowledge,” he says.

“Video Library is like the Windmill Theatre during the London Blitz. … No matter what happens, and no matter how close the bombs may fall, we still have a good audience base, and we kind of owe it to them to stay open.”
— Casey St. Charnez, Video Library co-owner

Harris and St. Charnez know that the Video Library is an anachronism now. Maybe it’s endured because Santa Fe is a movie town and a movie production town. Or something else.

“We never felt that we had competition,” St. Charnez says.

For many customers, it’s more than that.

“It’s the people,” Harris says. “At Video Library, sometimes I think the movies are secondary. It’s the talk that goes on.”

Baum, a veteran Vid fan, says “What I love about Video Library is the personal contact, and not just with Lisa or Casey but everybody in there.”

And he compares it to the independent bookstores manned by people who knew the stock and its background like it was second nature.

“I could go in and say, ‘OK, Clint, what do I watch?’ In this day and age, to have a personal touch proves over and over again that there’s nothing like human contact. Ask anybody that’s gone on in there in the last 20 years and they’ll say the same thing. They love the people.”

But can it really continue to stem the tide of hundreds of channels streaming thousands of movies and TV 24 hours a day?

“Video Library is like the Windmill Theatre during the London Blitz,” St. Charnez says. “That was the theater that was represented in Tonight and Every Night with Rita Hayworth and Mrs. Henderson Presents. It was renowned because it was the one theater that just would not close no matter what.

“No matter what happens, and no matter how close the bombs may fall, we still have a good audience base, and we kind of owe it to them to stay open so they have a place to go, like they used to in the old days.” ◀

keep doing with the help of God, what you are doing and adding to the art and cultural life of the city different. and more needed now more than ever. thank you and many blessings always. joe