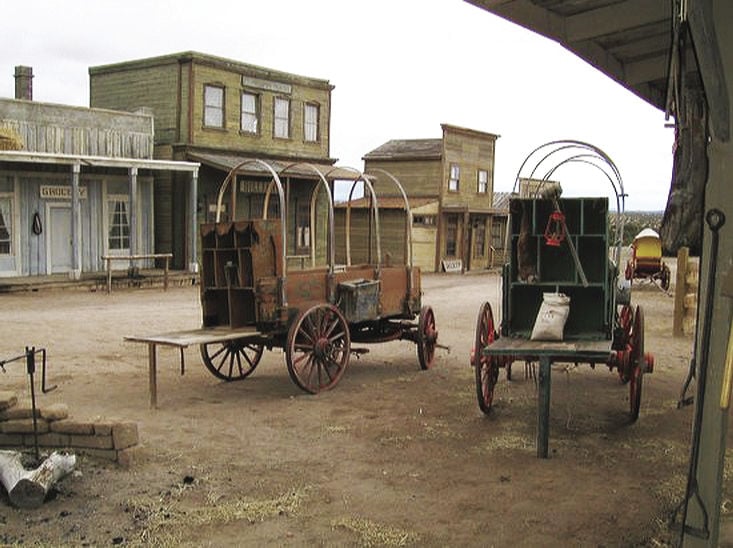 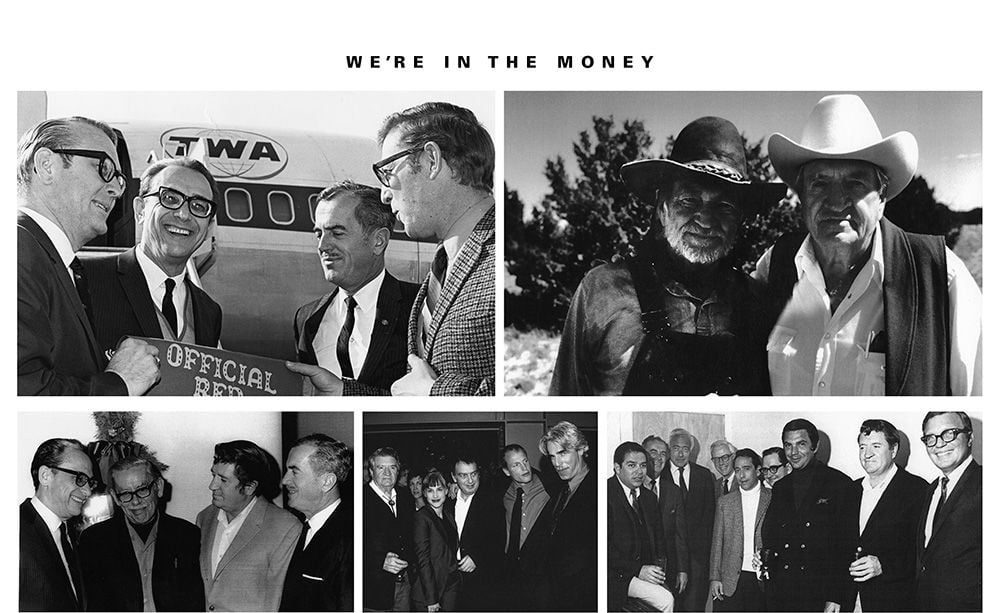 Top right image: from left, Willie Nelson and Max Evans on the set of The Hi-Lo Country, based on Evans’ novel. 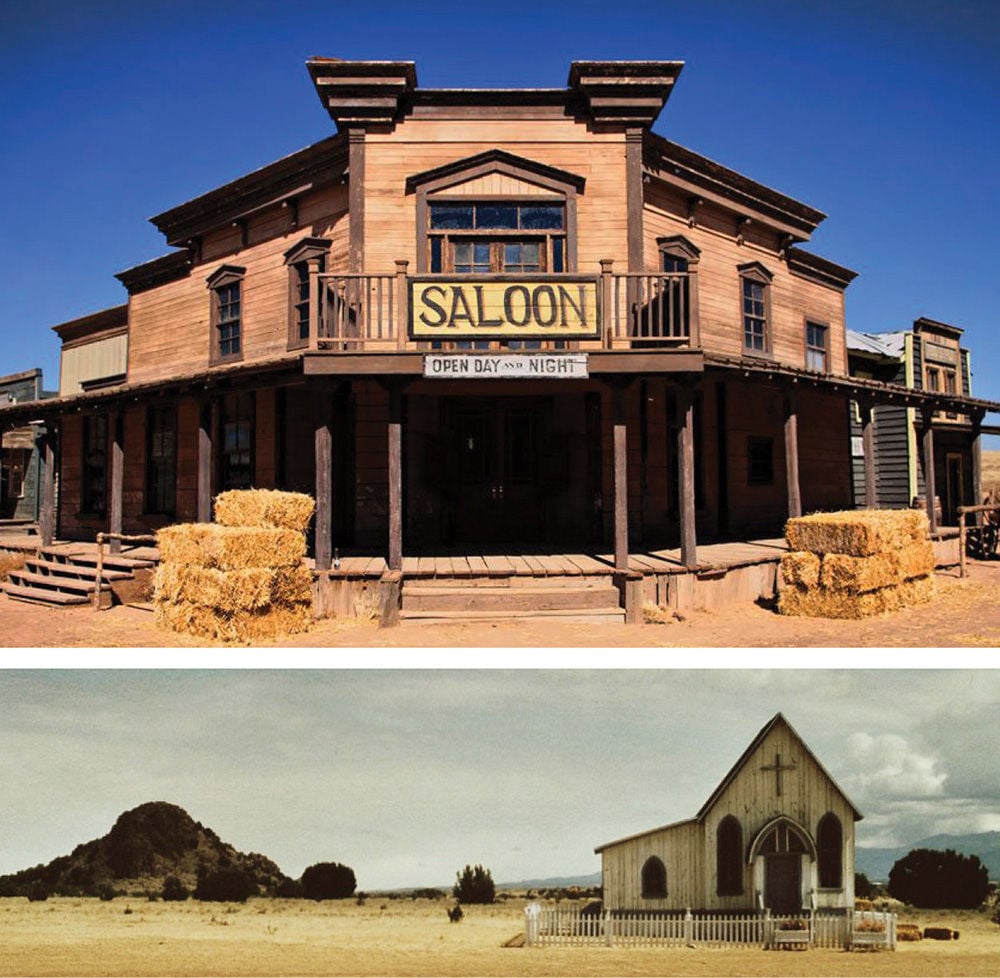 Sets at the J.W. Eaves Movie Ranch circa early 2000s 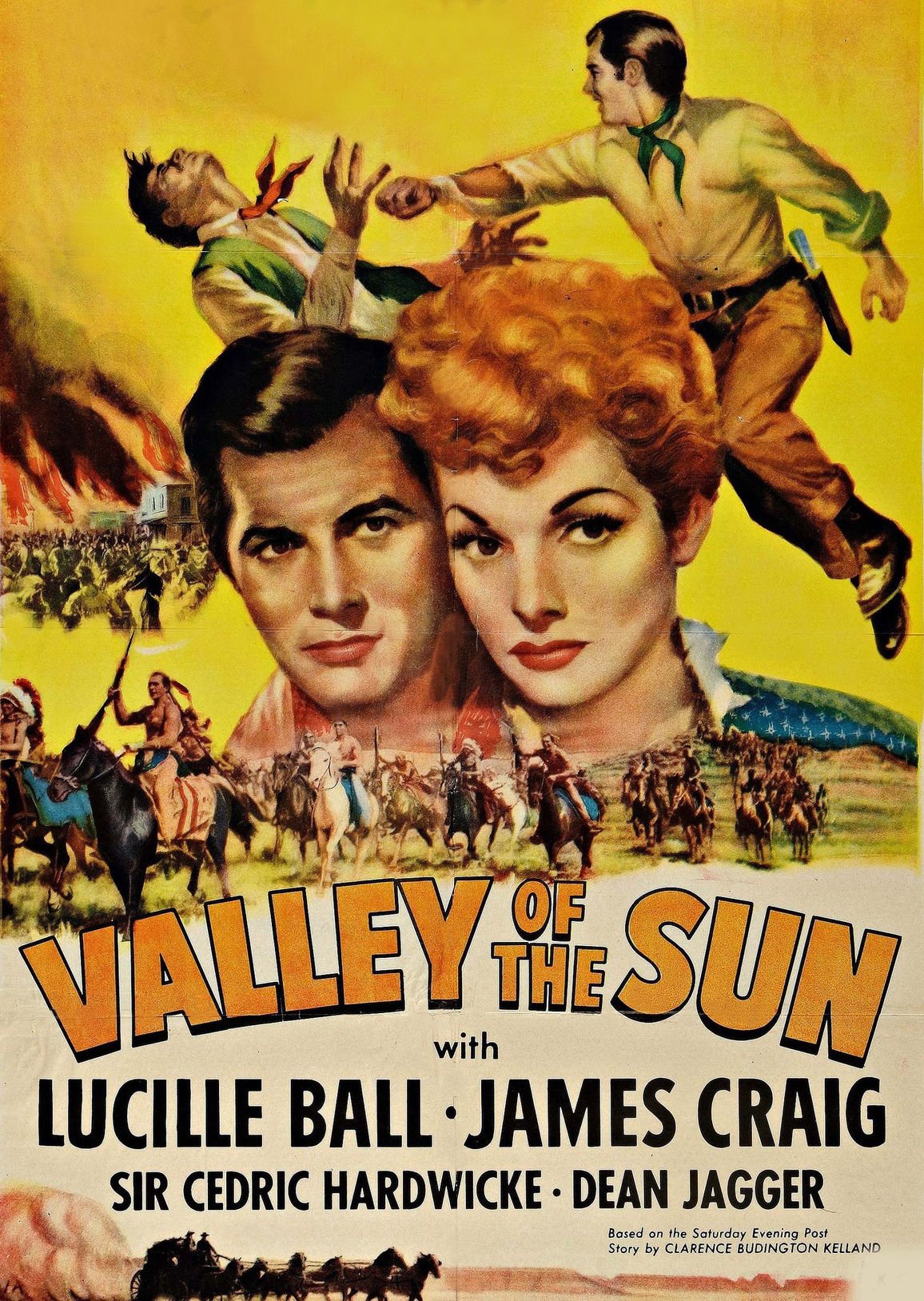 Top right image: from left, Willie Nelson and Max Evans on the set of The Hi-Lo Country, based on Evans’ novel.

Sets at the J.W. Eaves Movie Ranch circa early 2000s

This year marks a milestone for the state of New Mexico — the 50th anniversary of the New Mexico Film Office. Originally known as the New Mexico Film Commission, it was the first state agency of its kind founded anywhere in the United States. It is responsible for recruiting the lion’s share of the 1,610 films that have been shot in the state.

New Mexico didn’t originate the idea. The first film offices in North America all existed in Canada. In 1917, the Province of Ontario established the Ontario Motion Picture Bureau, created to “carry out educational work for farmers, school children, factory workers and other classes.” The Canadian government, finding the idea laudatory, formed its own national motion-picture bureau a year later in 1918.

By the 1940s, local governments within the United States wised up and began to create film offices not only designed to appeal to Hollywood, but also to snag industrial, television, and commercial work. However, no states had done so until 1968, when Gov. David Cargo unveiled the New Mexico Film Commission, an 11-member board that lobbied Hollywood to steer full-fledged feature-film productions here.

The commission wasn’t the brainchild of “Lonesome Dave.” Chuck Mittlestadt, an Albuquerque-based stringer for the Hollywood Reporter, first pitched the idea. Mittlestadt served as the commission’s original vice-chairman, while Lou Gasparini, manager of the Fox Winrock Theatre in Albuquerque, landed the pivotal chairmanship. Most of the members lived in Albuquerque, but Santa Fean Jack Schaefer, author of the Western novels Shane and Monte Walsh, was a key appointee, along with Max Evans of Taos, author of The Rounders and The Hi-Lo Country.

Today, Evans, ninety-two, lives in Albuquerque. He’s one of two original members of the film commission who are still around — the other is longtime journalist and photographer Dick Skrondahl, who also lives in Albuquerque, although he previously worked in the eastern part of the state for the Clovis News-Journal. Pasatiempo spent an afternoon with Evans, reflecting on the early days of the commission and how it became a success, building New Mexico’s reputation as an ideal place to shoot film and television. The commission always had to fight off competitors, as other states quickly figured out that New Mexico was doing something right.

Louisiana sometimes claims it formed a state film office ahead of New Mexico, which is not true. Louisiana had only local film recruitment offices in the 1960s, among parishes in the New Orleans regions. Evans said that the Southern states — Georgia and North Carolina, in addition to Louisiana — were the first to copy New Mexico. Texas, in particular, staked Evans out, seeing if he would reveal “the trade secrets” of New Mexico’s campaign to lure Hollywood here. Evans declined, not so much because he was guarding Fort Knox, but simply because no true deep, dark secrets were involved. Evans remembered speaking in Texas and getting invited out afterward by four members of the state’s new film commission. “They really set a trap. They asked me to come over and speak, but what they really wanted to know was how we had our film commission set up, and why we were able to get so many film productions to come to the state.”

The secret to the state’s success? Gov. Cargo agreed to lead the charge, going to Hollywood to wine and dine film producers and studio executives. Cargo pulled out the stops to schmooze with the elite, often making cameo appearances in new features. Four films got made in New Mexico in 1968, including two big Westerns, Hang ’Em High with Clint Eastwood, and The Good Guys and the Bad Guys, starring Robert Mitchum. The director of the latter film, Burt Kennedy, became one of New Mexico’s most vocal advocates, along with Sam Peckinpah — a personal friend of Evans who shot parts of The Ballad of Cable Hogue and Convoy in New Mexico.

Evans also credited David Dortort, producer of such TV shows as Bonanza and The High Chaparral, with encouraging colleagues to seek out fresh landscapes for Westerns in New Mexico.

Junkets to Hollywood in the late 1960s and early ’70s followed initial attempts to reach Hollywood executives by phone. “We couldn’t ever get anyone to answer,” Evans said, so the group of film commission members and supporters planned its first excursion, sending Evans out two weeks in advance to pound the pavement and buttonhole prospects. He never got paid for those efforts — and ultimately fell behind in completing a scheduled novel — but he managed to round up Hollywood writers, producers, and directors for a get-together with members of the film commission and Gov. Cargo at the Beverly Hills Hotel.

“I didn’t know if anybody was going to show up,” Evans, said, adding that he was a nervous wreck until the shindig began, with some 60 decision-makers present. They fell hook, line, and sinker for the vivacious Gov. Cargo. “In my long life, I have never seen any politician give such a good speech in 15 minutes or less. It was the best pitch I have ever heard, and they all just fell in love with him. That’s what really got the ball rolling.”

Movies were made in New Mexico long before there was a film commission. A documentary crew working for Thomas A. Edison shot the first short here, Indian Day School, in 1898. Silent stars who worked on productions in the state included Mary Pickford, Mabel Normand, and Tom Mix. In the sound era, multiple Westerns were shot in the Gallup area during the 1950s, although the Western Valley of the Sun with Lucille Ball was shot in 1942 outside Taos.

After the formation of the film commission, production rates skyrocketed. In 1969, five feature films came to New Mexico. The number climbed to 14 in 1970, and 16 in 1971. It wasn’t until 2003 that the original film commission finally got topped with 20 features being completed here that year. In the early 1990s, during the administration of Gov. Bruce King, the New Mexico Film Commission evolved into its present-day incarnation — the New Mexico Film Office.

Besides schmoozing and proselytizing in Hollywood, the members of the film commission undertook a second critical task. They needed to prepare New Mexicans to accommodate the new industry. This meant not only training the first New Mexicans to hold skilled film jobs, but also developing “movie ranches,” complete with Western towns and Native scenes and outposts, where pictures could be shot.

The commission lucked out in finding J.W. Eaves, a native Texan, who owned the 1,500-acre Rancho Allegre cattle ranch outside Santa Fe. Eaves had an outgoing demeanor and a passion for the business after working on Empire, an early ’60s TV Western. Soon, he was hosting the biggest movie productions at his ranch, including The Cheyenne Social Club, starring Jimmy Stewart and Henry Fonda. He’d greet crews and stars wearing his Western boots and gray felt Stetson, sometimes with his motto: “Welcome to my town. May the good Lord take a liking to ya, cuz I sure have.” All told, nearly 50 films and TV shows were shot at the ranch. “He was tickled to death to entertain them,” Evans said. “I’ve never seen a man in my life who was as gracious as J.W. Eaves.” His hospitality brought prosperity to his ranch and helped to transform Santa Fe into one of the busiest backdrops for Westerns filmed in the United States.

Evans remembered meeting with Eaves for a lunch at the Plaza Café in Santa Fe, convincing him to build the state’s first Western movie street. “He offered me a percentage of that street after I explained what it should look like and how he needed to build it. You know, I never went over there and collected any money.” Evans isn’t really remorseful, just stating a simple fact. Eventually, other movie ranches, notably Bonanza Creek, joined the Eaves Ranch. Many years passed before the then-College of Santa Fe opened the state’s first movie soundstage, the Greer Garson Studios.

Today, all 50 states have operating film offices, and close to 1,000 cities, towns, and regional districts have formed offices, or hired individual recruiters, charged with enticing film and TV productions. The stakes have grown higher, with refundable tax credits and all kinds of incentives being offered. The largest of these all belong to the Association of Film Commissioners International, which boasts member film offices now in more than 45 countries. A visit to www.afci.org gives a sense of the competition, and the swelter of dueling incentive packages that are now available.

Evans said he is glad he got to serve in the early years of the commission, rather than competing against hundreds of film offices. Still, he said the key to future success is the same as it was before: reaching out to Hollywood, making personal contacts, and being sure to emphasize New Mexico’s breathtaking scenery, from the glistening dunes at White Sands to the alpine mountain peaks along the Cumbres & Toltec Railroad outside Chama.

Evans said that everything he did to help the commission evolved from his childhood memories and emotions — the first movie he attended at a theater in Hobbs, close to his home in Humble City. He doesn’t remember the name of the Depression-era picture playing that day, but he recalled spending a dime for his ticket. Inside, the ceiling was painted blue, and when the lights went out, galaxies of stars shone above his head. Evans instantly knew that someday, somehow he would eventually work in the movie business. The magic touched his soul.

J.W. Eaves’ hospitality brought prosperity to his ranch, and helped to transform Santa Fe into one of the busiest backdrops for Westerns filmed in the United States.