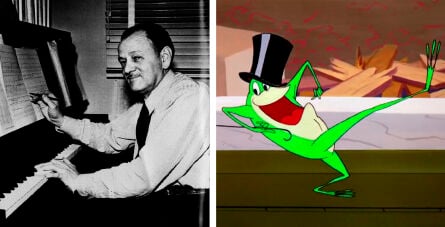 Carl Stalling and a still from One Froggy Evening 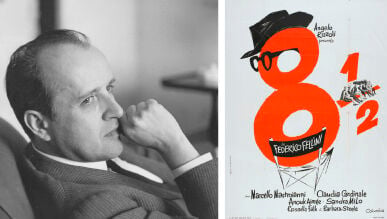 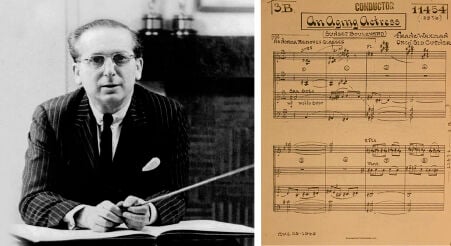 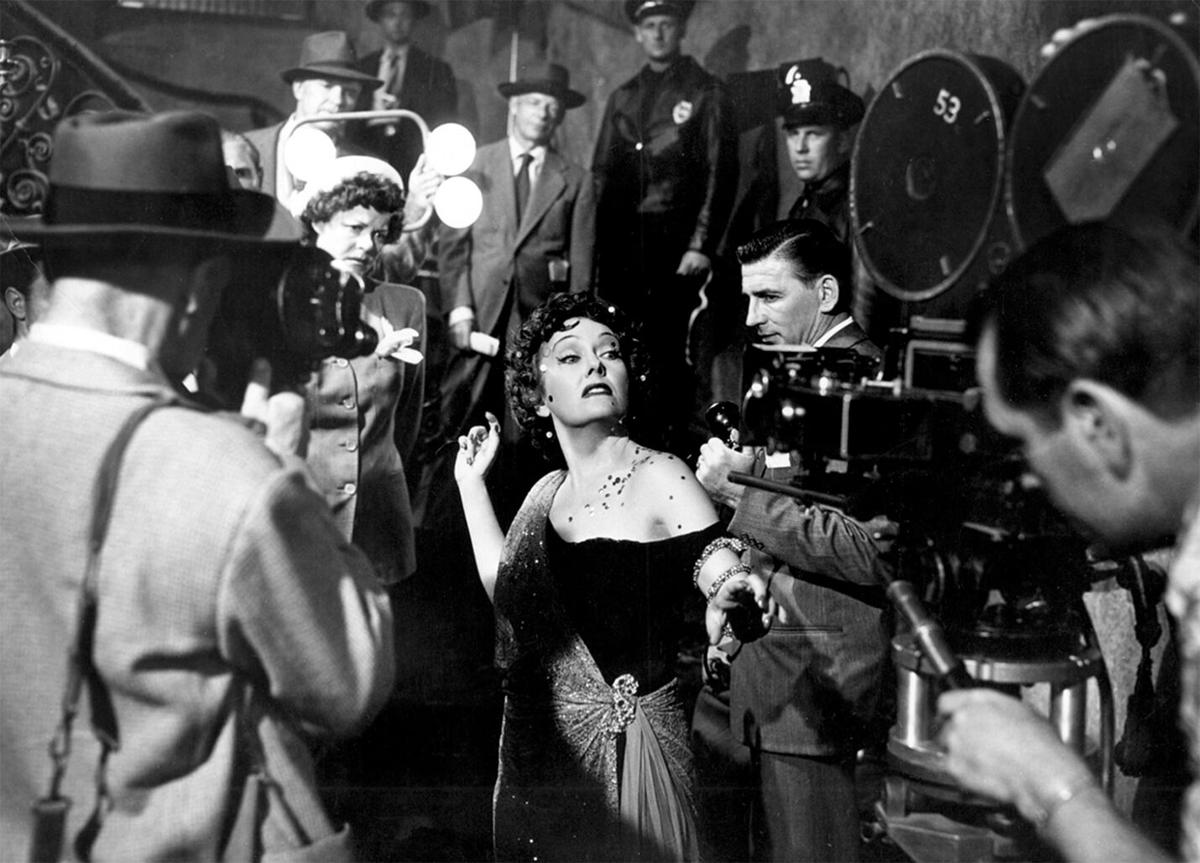 Carl Stalling and a still from One Froggy Evening

With the flow of new releases from Hollywood reduced to a rivulet, this is a great time to revisit some classic titles featuring the work of four great composers active during the 1930s, ‘40s, and ‘50s. The films mentioned are widely available on DVD and via streaming services; soundtrack CDs are also available for most.

Listen to the main title from Kings Row: youtube.com/watch?v=tysCiL1-24w

If Erich Wolfgang Korngold hadn’t been born, John Williams would have had to invent him and his film music — at least before writing swashbuckling scores such as Star Wars and Raiders of the Lost Ark. A Viennese wunderkind who wrote a full-length ballet at age 11, Korngold’s first Hollywood score was for Captain Blood, a rousing adventure film from 1935 pitting hero Errol Flynn against villain Basil Rathbone, with 19-year-old Olivia de Haviland as the love interest.

The Flynn-Rathbone-de Haviland trio was reunited with Korngold in 1938 for The Adventures of Robin Hood, which earned the composer his second Academy Award. (The first, for 1936’s Anthony Adverse, was given to the Warner Brothers film department in toto, even though Korngold wrote all the music.) Robin Hood was one of the first movies made in the lush, three-strip Technicolor technique, and the score fully captures the film’s romance and derring-do. A skilled conductor as well as composer, Korngold built the Warner Brothers orchestra into Hollywood’s finest (and largest), equal to the demands of his opulent late-Romantic music. He wrote a total of 19 film scores between 1935 and 1947, many but by no means all in the adventure genre.

Inspired by the title of a new project in 1942 (Kings Row), Korngold wrote a brass-filled fanfare suitable for royalty to open the film, then discovered it was about the sordid, beneath-the-surface events in a small Midwestern town. He quickly pivoted to produce a more intimate, often haunting score so popular with audiences that they deluged the studio with requests for its sheet music.

Korngold was also celebrated for his rapid wit. In the early 1950s, fellow Warner Brothers composer Max Steiner jokingly said to him, “We’ve both been here for more than 10 years now, and in that time your music has gotten worse and worse, while mine has gotten better and better. Why do you suppose that is?” Korngold instantly shot back, “I’ll tell you why that is, Steiner. It is because all this time you have been stealing from me, and I have been stealing from you.”

Listen to the theme from 8 1/2: youtube.com/watch?v=nWqC6kRCLjI

Nino Rota may be best known in this country for his scores to The Godfather and The Godfather, Part II, for which he won an Academy Award, but most of 171 films he composed were in Italy for directors that include Federico Fellini, Franco Zeffirelli, and Luchino Visconti. For 26 years, Rota scored every film Fellini made, starting with The White Sheik in 1952 and ending with 1978’s Orchestra Rehearsal, a period that spanned the director’s most celebrated work, including La Strada, Nights of Cabiria, La Dolce Vita, and 8 1/2.

Rota’s music was highly eclectic, but it provided an internal cohesion that complemented Fellini’s fragmented, dream-like visual and narrative style. Their intuitive mutual understanding gave rise to unusual working methods, with Rota often composing after hearing Fellini’s description of an atmosphere or emotion he wanted to capture, rather than from seeing the film, and Fellini sometimes determining the specific content of a film scene based on music Rota had already written.

8 1/2 provides an excellent look at their collaboration as well as some Fellini autobiography. It’s about a director who finds himself creatively stifled as he begins to shoot a film, the exact situation Fellini found himself in before making 8 1/2. He arrived on the set for the first day of shooting still unsure of what the film should be about, and as he welcomed everyone while “overwhelmed with shame,” the subject became clear. “I would make a film telling the story of a director who no longer knows what film he wanted to make,” he recounted in his book Comments on Film.

Rota unified the film with a circus march that undergoes repeated transformations in the movie’s vignettes, expressing a wide range of moods from anger to joy. It’s supplemented with elements of jazz, swing, and a chunk of Richard Wagner’s “The Ride of the Valkyries.”

For a film with a traditional linear narrative and a completely different musical style, try The Leopard, Rota’s third collaboration with Luchino Visconti. The story of an aging Sicilian prince who’s watching his way of life fading forever in the 1860s, it features the composer in his best 19th-century mode, pouring out a cascade of waltzes, polkas, mazurkas, and galops, as well as a previously unknown waltz by Giuseppe Verdi and excerpts from La Traviata and La Sonnambula.

Composers of cartoon music were the Rodney Dangerfields of Hollywood, getting no respect at all for decades, even as the achievements of those writing for feature films were becoming widely appreciated. The undisputed dean of cartoon tunes was Carl Stalling, with more than 750 such scores to his credit, according to the Internet Movie Database (imdb.com).

Most were written during his Warner Brothers tenure, from 1936 until his retirement in 1958, but his work goes back as far as 1928 with Plane Crazy and The Gallopin’ Gaucho, the second and third Mickey Mouse sound cartoons to be released. (Mickey was a far different mouse in those days; he’s smoking cigarettes and swilling beer in Gallopin’ Gaucho.)

Stalling drew from three main sources in his scores — music he composed, classical music, and popular songs, especially those where the title had a punning relationship to the action. “In My Merry Oldsmobile” would accompany scenes with automobiles, for instance, and “How Dry I Am” would apply to drunken characters.

Especially in the great Warner Brothers cartoons from the 1940s and ‘50s, such as Duck Amuck and One Froggy Evening, Stalling made use of many brief musical cues that changed with hair-trigger speed. In the seven-minute Bugs Bunny Rides Again, there are 18 music segments, ranging in length from five to 45 seconds. Six were composed by Stalling, six were from popular songs, and six came from classical music, including Rossini’s Stabat Mater, Beethoven’s Pathetique Sonata, and Wagner’s Götterdammerung.

The growing critical appreciation for Stalling’s work began in the 1990s, fueled by scholars and composers who grew up with his cartoons. In the CD liner notes for The Carl Stalling Project, the genre-busting young composer John Zorn wrote, “Stalling was one of the most revolutionary visionaries in American music, especially in his conception of time. In following the visual logic of screen action ... he created a radical compositional arc unprecedented in the history of music.”

Recommended media: Best of Warner Bros. 50 Cartoon Collection: Looney Tunes: This two-DVD compilation includes many of the studio’s most famous cartoons with music by Stalling. The Carl Stalling Project is a Warner Brothers CD with six complete cartoon scores, excerpts from many more, and audio from two of Stalling’s recording sessions.

Listen to music from the final scene on Sunset Boulevard: youtube.com/watch?v=o8liYl2Km_E

A German-speaking Jewish émigré who fled the Nazis, Franz Waxman became one of Hollywood’s most versatile, prolific, and successful composers. His 144 Hollywood films include The Bride of Frankenstein, Captains Courageous, Dr. Jekyll and Mr. Hyde, The Philadelphia Story, Rear Window, Rebecca, Suspicion, and To Have and Have Not.

Many composers borrowed liberally from the classics in their film scores, but Waxman was the only one to make frequent use of classical forms in his own music. Fugues figure significantly in Objective, Burma!, The Spirit of St. Louis, and Taras Bulba, and the climactic scene in Sorry, Wrong Number is underscored by a passacaglia (a theme and variations in slow ¾ time).

He also referenced individual compositions in some of his scores. When now-demented film star Norma Desmond descends the staircase at the end of Sunset Boulevard, she thinks she’s starring in a film as Salome. Waxman’s music references Richard Strauss’ opera of the same name, especially with its insistent, ominous trills. (They’re heard earlier when Desmond speaks passionately about reviving her career.) The Sunset Boulevard score was one of Waxman’s greatest creations, winning him his first Academy Awards and earning a spot on the American Film Institute’s 25 Greatest Film Scores of All Time roster.

Waxman considered the score for Rebecca, Alfred Hitchcock’s first American film, Waxman’s biggest challenge and his greatest achievement. In a speech to the Hollywood Women’s Club shortly after the film’s release, he explained why, saying, “The really dominant character in the story is dead, yet the entire drama revolves around her . . . Whenever a scene involving Rebecca appeared on the screen, it was up to the music to give Rebecca’s character life and presence.”

He succeeded by using techniques ranging from unusual orchestrations, including the just-invented novachord, the world’s first synthesizer, to playing techniques, such as the ominous string glissandos that accompany the heroine’s troubling dreams, to the placement of four increasingly fragmented waltzes, two by Johann Strauss, Jr. and two that he wrote himself.

﻿﻿﻿The second link erroneously reaches another “Kings Row” video, not the “8½” theme that can be found at https://youtu.be/nWqC6kRCLjI among other places.