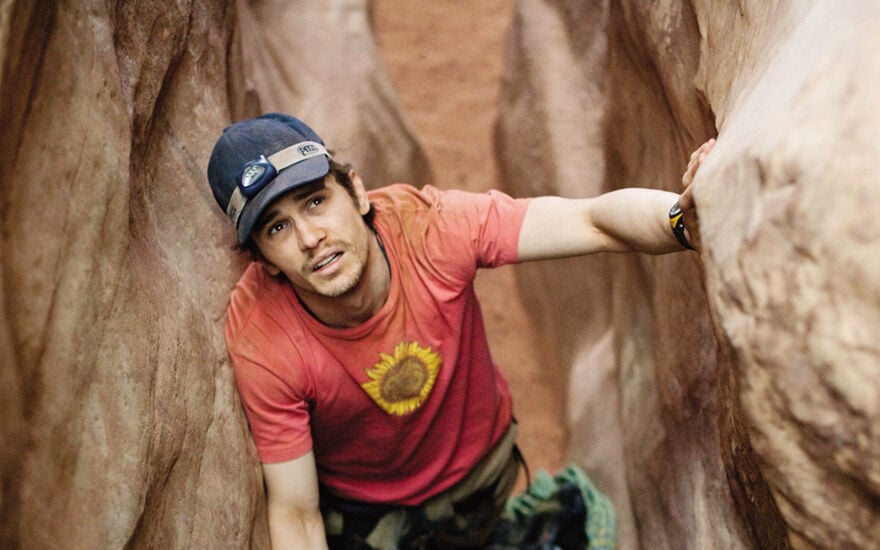 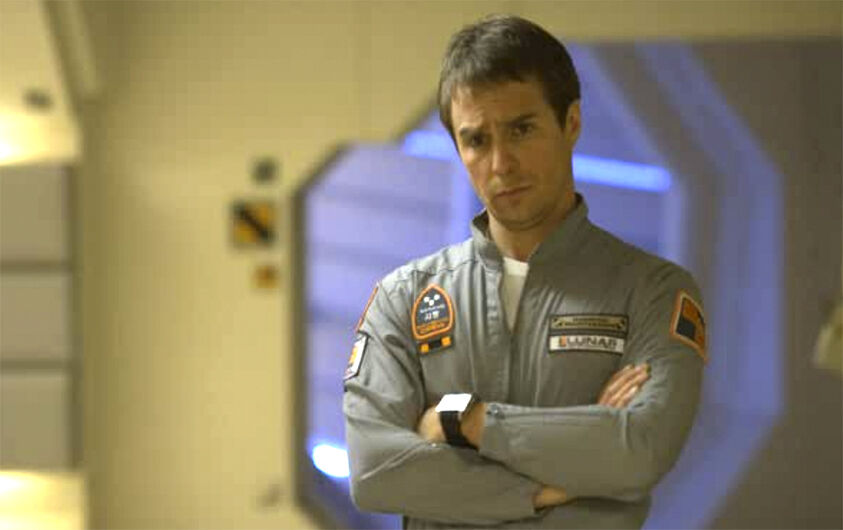 Sometimes, though, pandemic life can feel like a solitary survival experience. Not to worry, though, Hollywood has plenty of ideas for how to get by under the worst possible circumstances.

Everything is in motion in the opening minutes of this real-life disaster story about a hiker whose arm is caught under a rock. Coming off the success of Slumdog Millionaire (2008), director Danny Boyle infuses the first few scenes of 127 Hours with pure kinetics. The hero of the story, Aron Ralston ( James Franco), runs, bicycles, drives, jumps, falls, and positively exudes drive. He’s energy personified, until the unthinkable happens — a boulder rolls onto his arm and traps him in a canyon.

On the surface, Boyle seems like a strange choice to direct a film about a hiker stuck in a canyon by himself. Boyle is known for loud, stylized films and not quiet ruminations on death. Rather than change his methods, the British director leans into his personality and steeps Ralston in a continuous flow of memories. They’re almost all filled with brash memories and thumping music. It’s literally his life flashing before his eyes.

Based on Ralston’s book, Between a Rock and a Hard Place (an entertaining read), the ending of the film should come as no surprise. Ralston survives, but by cleverly holding back on the score until the rescue arrives, Boyle turns the happy ending into an exultant crescendo. Anyone who has ever been lost in the backcountry, and was relieved to find a trail or road, will recognize the feeling. Action/drama, rated R, 94 minutes, Amazon Prime Video

An unnamed sailor, played by Robert Redford, has an answer for almost every tragedy that befalls him throughout this disaster story. The boat in the film is almost never on an even keel, but the sailor certainly is, even as things look hopeless. In one accident after another, our sailor keeps calm and goes about correcting his problems. Up until the final minutes, he always knows exactly what to do. The joy of the film is watching our sailor work.

Director J.C. Chandor has a knack for making the process exciting. Margin Call, his 2011 film about numbers crunchers on Wall Street prior to the Great Recession, somehow turns a series of mathematical predictions into a pitched drama with the fate of the world on the line. Similarly, it’s a hell of a lot of fun to watch our sailor repair a hole in his boat, pump out excess water, and teach himself to navigate without electronics. Chandor keeps the camera steady so that we can follow our sailor the whole time — even when the boat goes underwater.

Our sailor only speaks a few times throughout the film, conveying the story through subtle facial expressions. Only once does he take to yelling in despair. It’s a remarkable show of restraint that not many actors could accomplish, but Redford has done it for decades. Adventure, Rated PG-13, 106 minutes, Cinemax

I first saw Alfonso Cuarón’s Academy Award winner with a friend in film school. Afterward, he recapped the movie nicely by saying that it held true to a movie-

Gravity is a survival story in which a solitary woman changes vehicles and then drives home. The rest is noise and detail — technologically marvelous and awe-inspiring detail. Back when theaters were open, Gravity was the kind of spectacle that made big screens essential, infusing cutting-edge graphics into eye-popping 3D.

Ryan Stone (Sandra Bullock)is coping with loneliness before she even arrives as a repair specialist to fix the Hubble Space Telescope. After an accident, though, she finds herself completely alone in the emptiness of space, with only ghosts and regrets to keep her company.

Outwardly, Stone spends her time outside the capsule, looking for a safe ride home. What she’s really looking for, though, is a little hope and a reason to keep living. Cuarón slyly turns Stone’s optimistic epiphany into a conversation between Stone and the ghost of another astronaut. The result is a little obvious but still emotional, and it’s almost as impactful as the final image in the film. Sci-fi/Adventure, Rated PG-13, 91 minutes, Amazon Prime Video

I wasn’t waxing hyperbolic when I said Redford had stoically survived on film in select movies over the course of decades. In the classic Western Jeremiah Johnson, Redford plays the titular, laconic hero and spends much of the film learning how to live in the wilderness. Co-written by John Milius, famed for his man-against-the-world scripts like the original Red Dawn (1984) and Conan the Barbarian (1982), Jeremiah Johnson is a toned-down adventure with less machismo and fewer oiled pecs. More than anything, it’s a film about education and growing up.

Johnson spends his days in search of mountain manhood. He begins the film as a veteran of the Mexican-American War, but he is a helpless child in the mountains. Were it not for some dumb luck, he would have died. Fortunately, Johnson finds a teacher (The Waltons’ Will Geer) and learns the ways of the mountains and the cold. As he matures, the mountains reward him with a family, friends, and a home. The mountains provide, but they also take away. Johnson discovers early on that survival as a trapper will ultimately be a lonely affair, and that’s exactly how things end up for him.

Based on a book by Vardis Fisher, director Sydney Pollack tells a muted rendition of the Western. There aren’t any loud shoot-outs and gangs of marauding do-badders. Everything is a struggle for existence; even Johnson’s fights with Native peoples are largely understated and awkward matches, not glamorous battles.

As he did 40 years later in All Is Lost, Redford is a master at demonstrating expertise nonverbally. Much of the film is spent hunting, building, fighting, and riding in silence. Johnson, though, is famed for his ability in these pursuits, and it’s enthralling to watch him work. Western, Rated PG, 108 minutes, HBO Max

Every day, Sam Bell (Sam Rockwell) wakes up and faces the drudgeries of running a station on the moon all by himself. The isolation and repetition are wearying and emotionally draining and made much bleaker by the white, antiseptic environment. Even the surface of the moon is characterless and desolate. It’s hard to imagine a harsher, lonelier environment.

Bell is lonely until he encounters a version of himself that throws his existence into a state of sheer panic. Rockwell has spent a long career in the space between movie star and top-notch character actor, but in Moon, he is the main attraction. He’s a powerful force in every scene of the film.

In Moon, director Duncan Jones riffs on Stanley Kubrick’s 2001: A Space Odyssey (1968) and boils it down to a one-man play. Moon was reportedly made on a shoestring budget, and the final result is much better for it because the stage is small and allows for a big performance. The film is also a big vision. At the end, it becomes a commentary on what makes humans unique. Sci-fi, Rated R, 97 minutes, Showtime