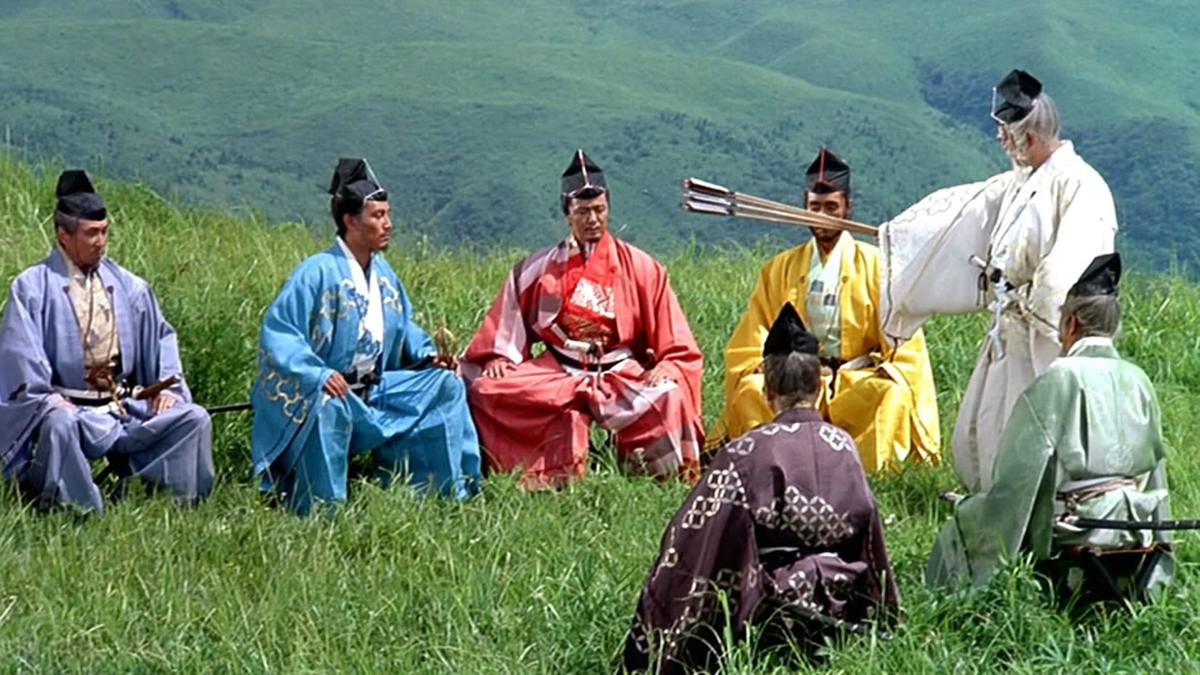 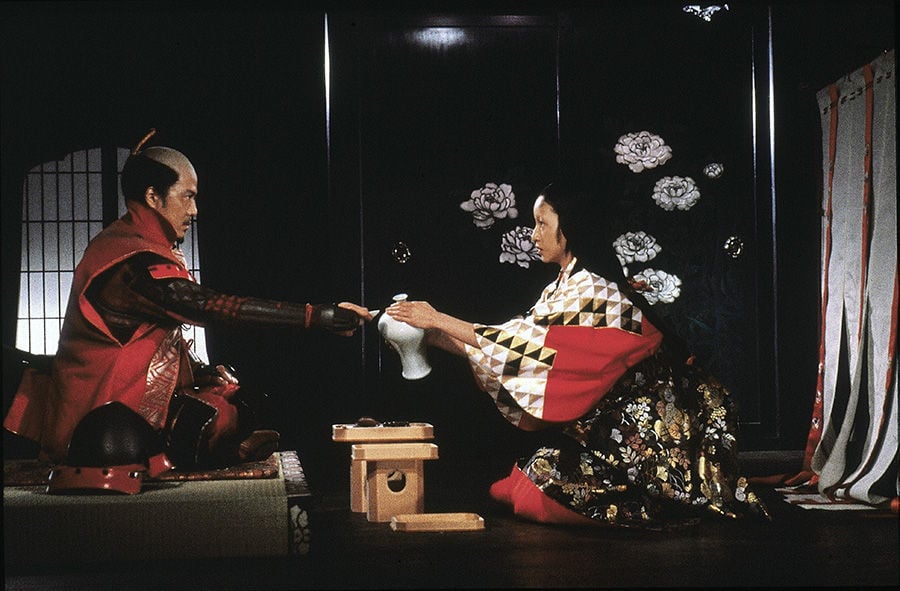 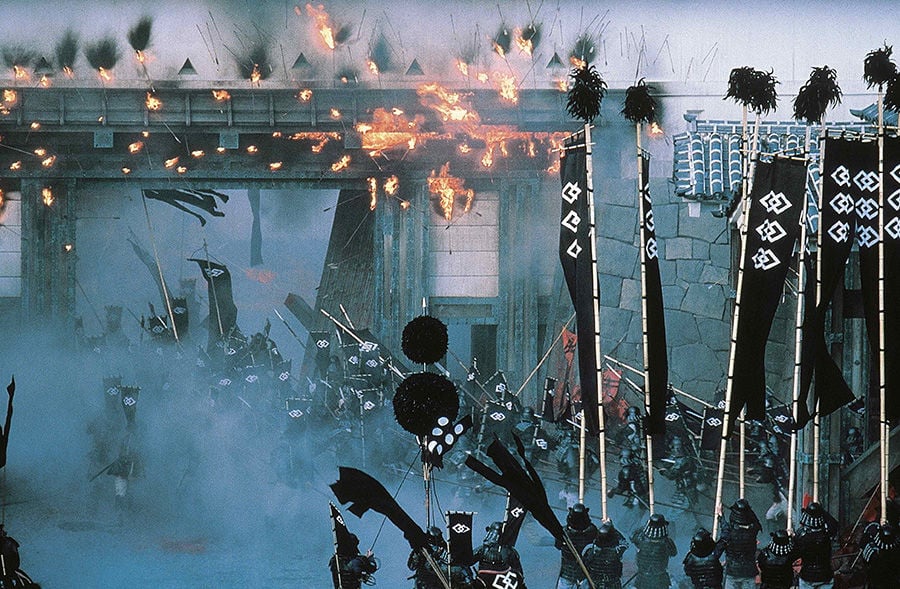 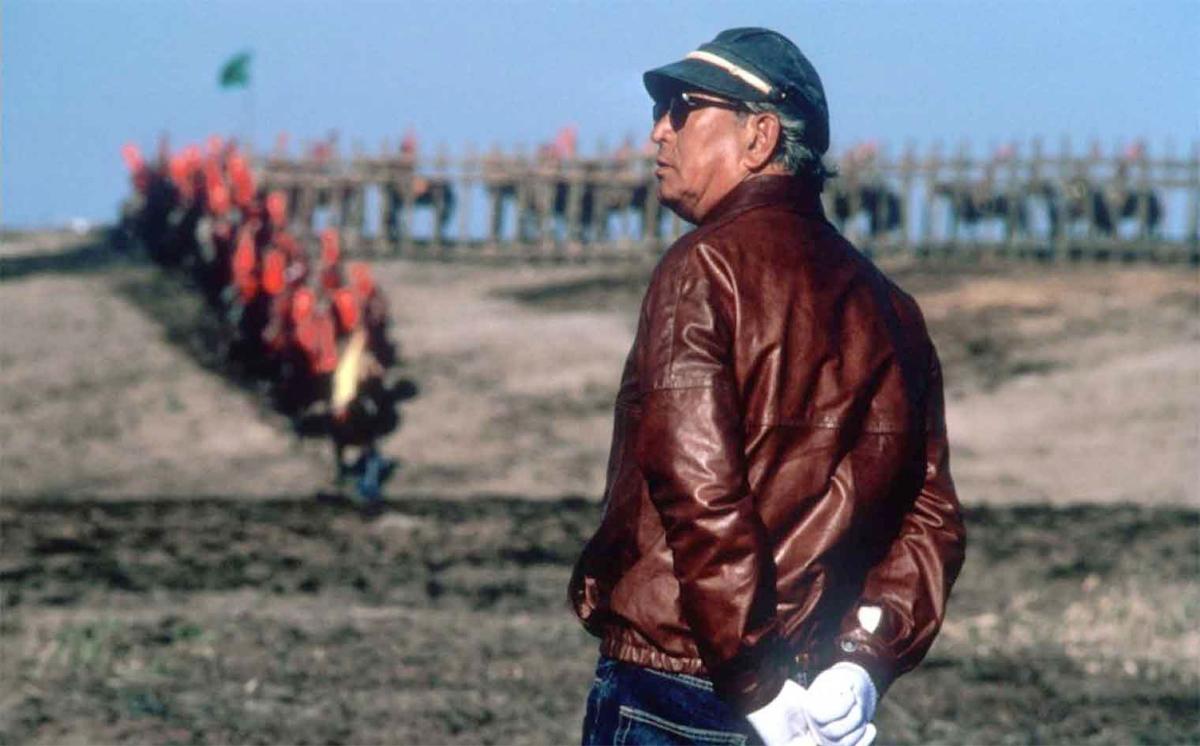 As a young man, Akira Kurosawa was haunted by the suicide of his older brother. In 1971, at the age of sixty-one, he too attempted suicide. In the translator’s preface to Kurosawa’s 1982 book, Something Like an Autobiography, Audie Bock writes that the causes were the failure of his latest film, Dodes’kaden (1970), at the box office — his first such failure — and ill health from an undiagnosed gallstone condition. Kurosawa recovered and got medical treatment, including surgery. More than a decade later, he directed Ran (1985), his late-life masterpiece. Beginning on Friday, March 11, the Jean Cocteau Cinema shows a recent restoration of the classic film. Ran was restored based on a 4K scan by the French laboratory Éclair, under StudioCanal’s supervision. Using an original negative, most of the restoration work was done manually, frame by frame, with Masaharu Ueda, one of the film’s cinematographers, approving the color grading.

Set in 16th-century Japan, Ran tells the story of an aging warlord, Hidetora Ichimonji (Tatsuya Nakadai) who has a vision and soon after renounces his kingdom to divide it among his three sons, Taro (Akira Terao), Jiro (Jinpachi Nezu), and Saburo (Daisuke Ryu). Hidetora illustrates for his sons an old adage that a lone arrow can be broken, but three arrows bundled together are unbreakable. The youngest son, Saburo, promptly proves him wrong. He predicts that since he and his brothers have been reared on war, they will soon be at one another’s throats — the blunt speech gets him banished from his father’s kingdom. Thus begins a series of disillusionments for Hidetora, who himself is by no means an innocent. The film’s story was inspired by a parable, and Kurosawa wondered where the narrative might lead if the three sons were “bad.” Ran takes us on that discovery. It is sometimes said that the story is based on King Lear, but Kurosawa apparently learned of the similarities between the two stories when he was already planning his film. At $12 million — French producer Serge Silberman financed the epic — it was Kurosawa’s most expensive film, and at the time, it was the most expensive Japanese film ever made.

In his fascinating autobiography, Kurosawa writes about how his youthful interest in painting, literature, and theater turned out to be the best preparation for his career as a film director. A newspaper ad led him to train in the Japanese studio system, at P.C.L. Studios, where he met “the best teacher of my entire life, ‘Yama-san’ — the film director Yamamoto Kajir-o.” Between 1950 and 1965, Kurosawa went on to make 12 successful films, including Seven Samurai (1954) and The Hidden Fortress (1958). It’s a pity he ends his autobiography prematurely with Rashomon (1950). In fact, he waited until he was in his seventies to write his story because he was concerned “it would turn out to be nothing but talk about movies. In other words, take ‘myself,’ subtract ‘movies’ and the result is ‘zero.’” He changed his mind when he saw that director Jean Renoir had published his memoir, and he was also moved by his regret that director John Ford, whom he idolized, had not left behind an autobiography.

Kurosawa opens Ran against a stunning mountain landscape. A group of horsemen lie in wait for a wild boar. The animal appears suddenly, and they give chase, their bows taut. Later, in a tent with the insignia of the sun and the moon, the men toast Hidetora, whose arrow has pierced the heart of the boar. While the men are still in the mountains, Hidetora decides to retire, and we realize that his sons are about to assume the predatory role that was until now his domain. The oldest son, Taro, becomes the new lord. At first he lets his father keep the family banner, but then he asks for it to be returned and also makes his father sign a humiliating pledge. Hidetora’s fool makes fun of Taro for swaying like a branch in the wind. Hidetora had wanted to enjoy his last years in the “outer castle,” and as a guest in his sons’ castles, which he has given them, but things don’t turn out so simply. Kurosawa’s genius is such that the pathos and the inevitability of Hidetora’s situation are evident from the start. The film swells into an exploration of how greed and war consume the once formidable family. Toru Takemitsu’s powerful score, influenced by the work of Mahler, underlines the tragedy of the battle sequences. For those who find the gruesome warfare in the second half of Ran overwhelming, an antidote might be Kurosawa’s 1952 film, Ikuru (To Live), a lesser-known gem inspired in part by Tolstoy’s 1886 novella, The Death of Ivan Ilyich.

While Kurosawa was filming Ran, his wife of some 40 years passed away. It is said that he took little more than a day to mourn before he carried on with filming. Kurosawa’s perfectionism is evident everywhere in Ran. After Hidetora’s two older sons betray him, his fool proclaims: “Heaven is very far away, but hell can be reached in a day.” Ran illustrates, as richly as has been done, how very close hell can be.