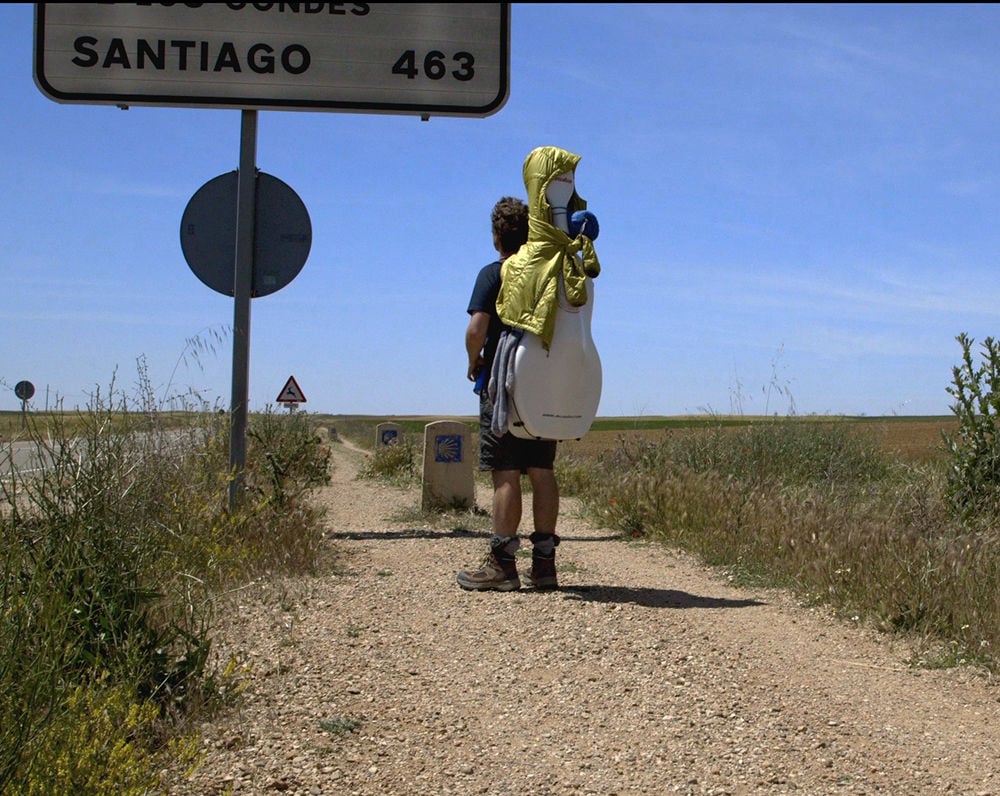 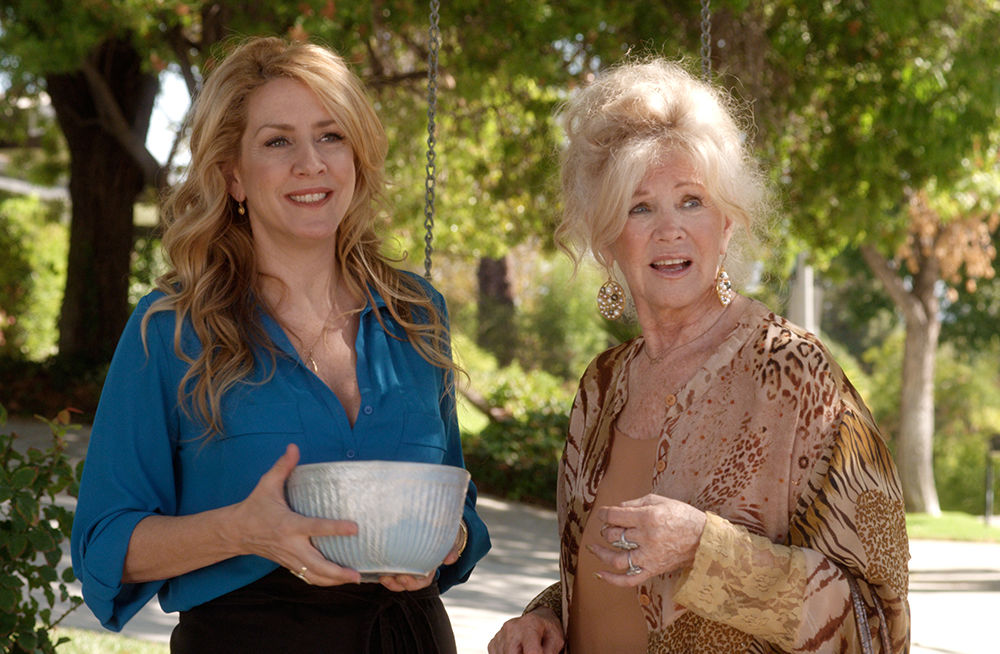 ART OF THE PRANK, documentary, 82 minutes, not rated, 3.5 chiles

Branded as the godfather of the media hoax, artist and activist Joey Skaggs satirizes social convention, often with hilarious results. Art of the Prank is a laugh-out-loud documentary with a pertinent message for our times, when fake and exaggerated news stories proliferate and people readily believe what they’re told instead of investigating and engaging in critical thinking. Written and directed by Andrea Marini, the feature details Skaggs’ previous fictions: a celebrity sperm bank, a mobile confessional called a “portofess,” a set of proposed rules for walking, and a brothel for dogs that led to Skaggs getting a subpoena from the New York attorney general after the story raised concerns at the NYPD, the mayor’s office, and the ASPCA. Journalists at ABC News and elsewhere ran the story as fact.

But all of this is background. Skaggs is an artist whose medium is the ruse, and his hoaxes are a commentary on the state of the media, given to sensationalism at the expense of good journalism. This is borne out by the fact that The Village Voice, the Huffington Post, and CNN, among many other news outlets, have been taken in by his scams. Skaggs chose the route of the prankster, turning performance art into spectacles of absurdity involving multiple participants and relying on the tacit acceptance of people who don’t seem to know any better — along with, of course, the power of the media. However, this portrait shows that Skaggs isn’t just pulling your chain but also making you think — and the film provides insight into his working method, which is often a collaborative effort. — Michael Abatemarco

Center for Contemporary Arts, 1 p.m. Saturday, Dec. 10;  Skaggs and Marini are in attendance at the screening

THE BRAINWASHING OF MY DAD, documentary, 90 minutes, not rated, 3 chiles

Filmmaker Jen Senko’s father, a veteran of World War II, was a nonpolitical Democrat until he began listening to right-wing talk radio on long commutes for work. Then he changed, becoming a fanatical proponent of far-right ideologies. Senko’s documentary, narrated by Thom Hartmann, Jeff Cohen, and Matthew Modine, uses her father’s story as representative of a phenomenon with far-reaching consequences: an overt change in people’s personalities that is best described as brainwashing. A litany of statements from various people testify to the changes they saw in friends and family members who got taken in by rhetoric on radio and TV. “We all had one thing in common,” Senko says. “Someone close to us became enraged and unreachable after excessively listening to, or watching, right-wing media.”

What Senko discovered in her search for understanding what happened to her father was a media takeover with its roots in the Nixon presidency. She traces a history that includes the eradication of the Fairness Doctrine in 1987 — a Federal Communications Commission policy ensuring equitable and balanced reporting — that opened the door to extensive misinformation and the targeting of specific demographics. The architect of the corporate media takeover is Roger Ailes, founder and former CEO of Fox News, who used a simple formula to gain an audience, summed up in the documentary by right-wing radio host Rush Limbaugh: “People on radio and TV are there for one reason only, and that’s to make you mad.” In the film, Limbaugh says the formula for making you mad hasn’t changed, but “people keep falling for it.” The Brainwashing of My Dad is a timely film that sheds light on the mechanics of coercion and manipulation happening now on a national level. — M.A.

Clay Peaks (Gary Cole), a widowed horse farmer, invites his taciturn but reliable farmhand, Cotton Welles (Erik Smith), into his God-fearing, death-shattered family after he sees him tame a wild horse just by looking at it. Cotton obviously has a secret past, which catches up with him in the form of his Christian evangelist mother, Maggie Mae Cooper-Welles (Lusia Strus), who wants him to join her on the revival circuit as he did when he was a child. This is the single tension in Cotton, a dull movie with an interesting premise that does not contain enough narrative to support its own story. Some of the performances are strong, including Cole as a silent but respectful father to his young daughter, but the actors are not given much to work with, and what little we learn about their inner lives and motivations is anchored in cliché. Strus, who stands out as an unhinged preacher, is saddled with every possible stereotype of a hypocritical Christian and so ends up chewing the scenery more than necessary, while Smith does little more than stare into the distance — he’s ultimately unconvincing as a young man touched by the hand of God. — Jennifer Levin

More than a century and a half have passed since the publication of Charles Darwin’s On the Origin of Species, and the theory of evolution remains the cornerstone of modern biology. But its history is paralleled by another, darker history wherein pseudoscience, false claims, and misinformation were used to back an ideology of racial superiority and cast minorities in a negative light. Director Stephanie Welch’s documentary is a look at the misuse of genetics and the dubious science that, even today, threaten the gains made in gender equality, race, and class relations; her film takes aim at the belief that genetics is responsible for everything from sexual compatibility and promiscuity to addiction and intelligence.

Eugenics — a decades-long program that left hundreds of thousands of Americans unable to bear children — used discredited science to back policy decisions and give race-based legislation an aura of legitimacy. A Dangerous Idea makes the case that inequality in America today has opened the door for the further erosion of credible research and the rise of pseudosciences used to rationalize the marginalizing of women, immigrants, and minorities. Welch humanizes this tragic history with individual cases, such as a mother whose child suffered permanent brain damage after ingesting lead paint. A neuropsychologist hired by the lead industry used junk science to suggest to the jury that the family was genetically unintelligent — and the jury bought it. The film is a sobering look at the persistence of some very dangerous ideas. The festival screening is the film’s world premiere. — M.A.

Using exclusive interview footage of dominant figures in the art world, director Kristi Zea sets the stage for the story of artist Elizabeth Murray and her place in art history. Murray, who died of cancer in 2007, arrived in New York City in 1967, a struggling single mother who rose in prominence to become a breaker of artistic conventions. She is one of a handful of women artists who has been honored with a retrospective at New York’s Museum of Modern Art. The film chronicles her journey from childhood to her last days, tracing her influence on ’60s Pop art and ’70s minimalism and abstraction and her explorations into vibrantly painted sculpture and shaped canvases. Meryl Streep lends her vocal talents as narrator of Murray’s journal entries, and Zea includes studio and home-video footage, providing a sense of Murray’s working methods and her role as matriarch.

Murray found a balance between her domestic life and her artistic career. She defined her personal trajectory without paying much heed to social convention and challenged the art world status quo by experimenting with shape and form in works that explore themes of domesticity and relationships. Streep’s narration is fresh, impromptu, and conversational. — M.A.

It is Thanksgiving in America, and no one can imagine surviving the day without their smartphones — until the wi-fi goes down at a gathering of 15 family members and friends. The meal is already at risk because the host, Judy (Joely Fisher), does not know how to cook; her sister Kate (Daphne Zuniga) begins guzzling cocktails upon arrival; and a mysterious video artist (Nick Court) keeps asking everyone about their feelings. The story plays out as a mock horror movie, as each character confronts his or her personal connection — or addiction — to technology. Petra (Michelle Hurd) needs the constant validation of reactions to her Yelp reviews, a hobby that has alienated her husband and daughter; while Jesse (Jonathan Slavin) gets depressed when his email inbox is empty, though he grouses about the unsatisfying nature of online dating. The characters try to decide if what has been lost — including the pleasure of looking words up in a real dictionary rather than through a dictionary app — is worth what has been gained. The cast is bursting with recognizable character actors who have been bumped up to featured players, all of whom shine in the brighter light of Search Engines. — J.L.

STRANGERS ON THE EARTH, documentary, 96 minutes, not rated, in Spanish and German with subtitles, 3.5 chiles

Each hiker has his or her own reason for making the trek on the Camino de Santiago (also known as the Way of St. James), Europe’s most famous pilgrimage route, which winds through northwestern Spain. Director Tristan Cook follows Dane Johansen down the road in 2014, as the American cellist carries his instrument on his back and plays at historic churches along the way. It is a voyage of self-discovery for Johansen: He quickly tires of being led by his ego and questions the very nature of his project, which rests on the assumption that people in the towns through which he passes want him there. The film uses an almost mystical approach to the intersection of speech and identity, along with a score of Bach played by Johansen. The personal becomes universal as Cook reveals the inner lives of others on the route and explores how they form friendships, romances, and new solitary identities or transformational ideas about themselves. Even as specific hikers — some of whom we see as individuals but many of whom we do not — sometimes express dismay at the truths they learn about themselves and others, the movie is light on answers and judgment and heavy on questions and wonder. — J.L.

Today, many New Mexicans make a living working on film and television crews, and the Santa Fe Film Festival is an annual late-fall tradition. In addition to the slate of feature films, documentaries, and short programs curated for the festival’s 16th incarnation, there are numerous panels, workshops, and parties, as well as Tune-Up, a three-day event designed to help aspiring actors and others who want to work in film learn how to break into the business. > READ STORY