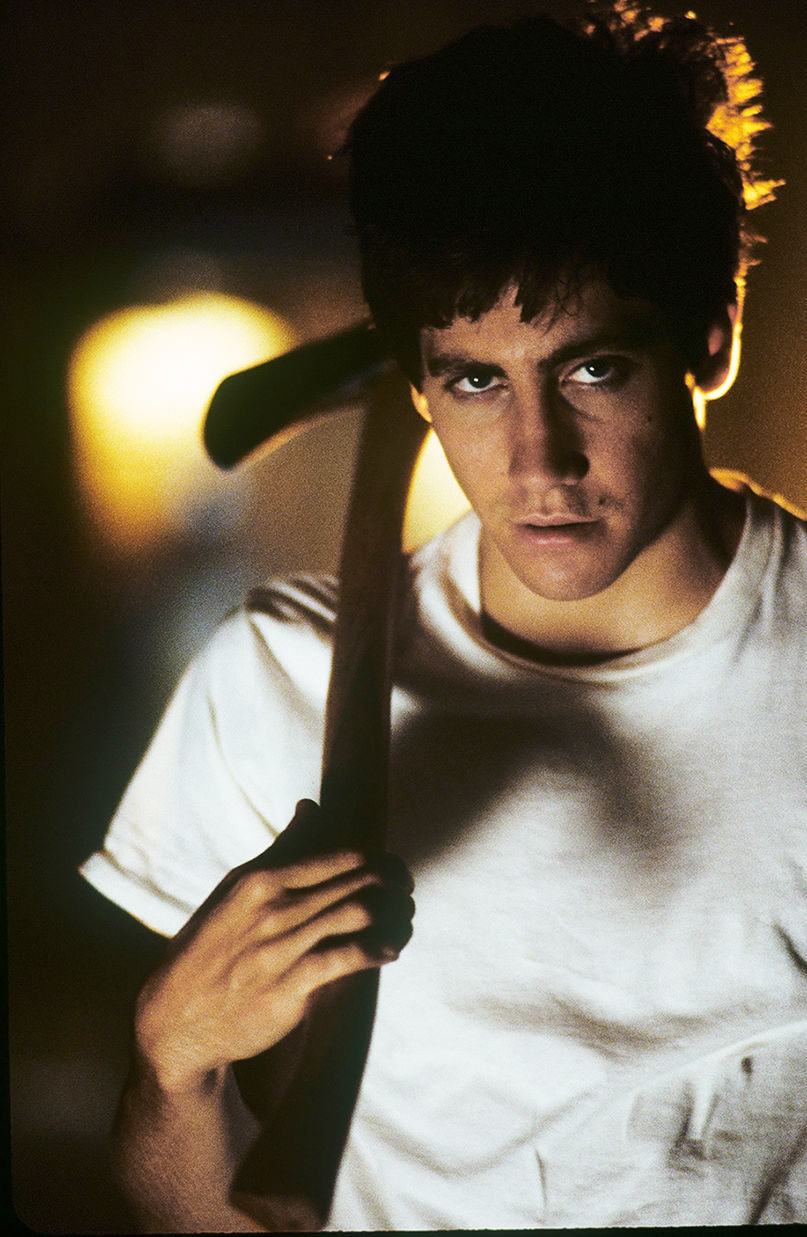 Go ahead, axe me a question: Jake Gyllenhaal 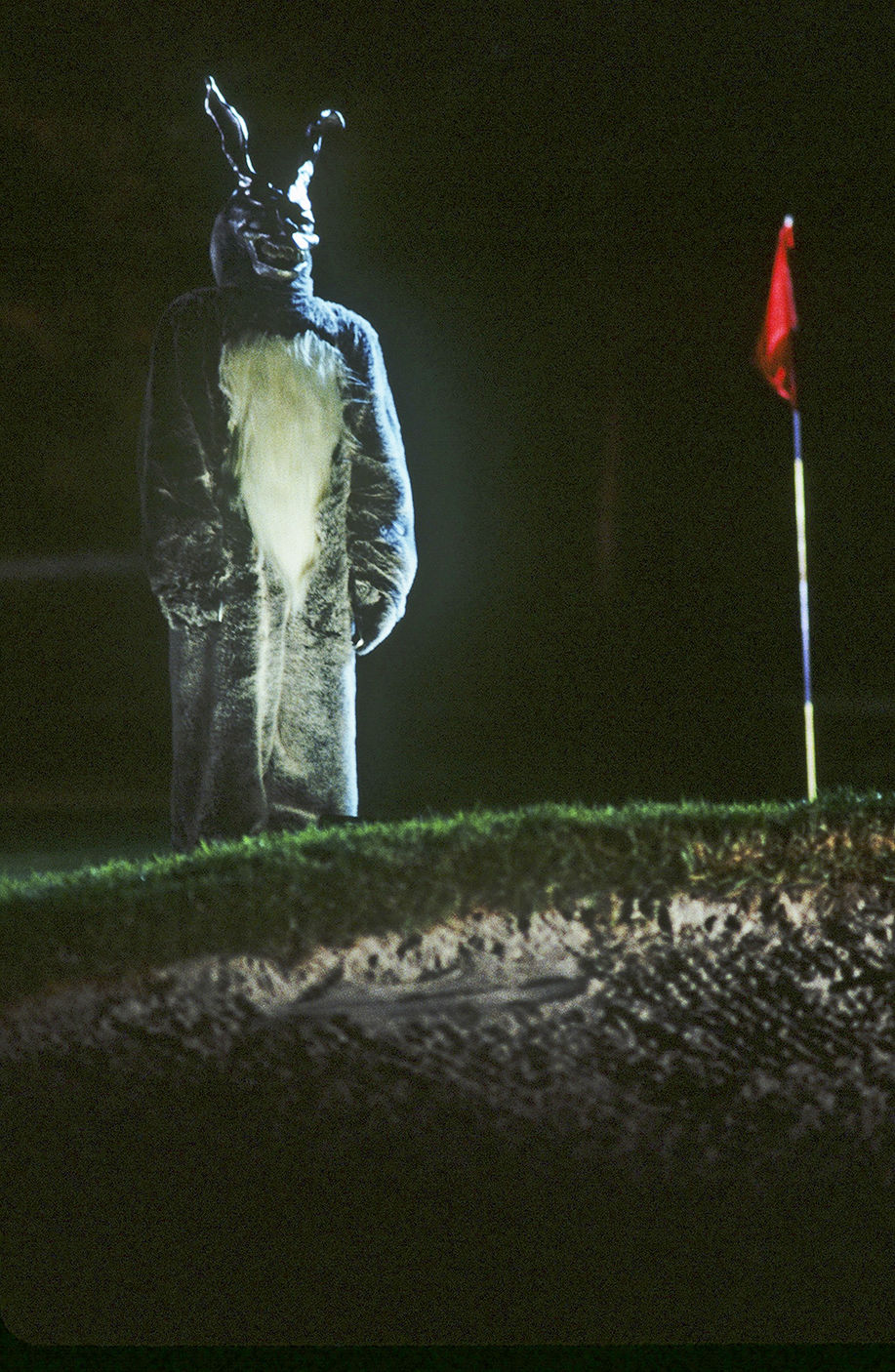 Go ahead, axe me a question: Jake Gyllenhaal

The story of Donnie Darko, the fifteen-year-old protagonist of writer and director Richard Kelly’s moody, labyrinthine film about growing pains, time travel, sacrifice, and redemption, is not your typical coming-of-age tale, but it’s a smart and even realistic one — despite its more fantastical moments. The movie knows who its audience is: the black sheep, the outsider, the misunderstood.

One night Donnie ( Jake Gyllenhaal) is roused from bed, summoned to the front yard by a mysterious figure — a man in a bunny suit and a threatening mask. He tells Donnie, who might be dreaming, that the world will end in 28 days, 6 hours, 42 minutes, and 12 seconds. While Donnie was out of bed talking to the bunny man (whose name, we learn, is Frank), he managed to escape getting crushed by a falling jet engine that crashed through his bedroom ceiling. It wasn’t luck that saved Donnie. He was sleepwalking, not guided by his own conscious will. But he was guided nonetheless.

Donnie has waking dreams of Frank, who urges him to engage in destructive behavior. Donnie enters psychotherapy after torching an abandoned home and is put on medication. Part of the wonder of Donnie Darko is that actions that occur early on have repercussions that you may not expect. For instance, Donnie’s mistrust of a motivational speaker played by Patrick Swayze proves to be on target. Donnie hides behind a mask of sardonic wit. Maybe he’s like Frank, a man behind a mask. “Why are you wearing that stupid bunny suit?” he asks Frank one night. Frank replies, “Why are you wearing that stupid man suit?” But Donnie is a kind person underneath. At the root of his delinquency is righteous anger toward a cynical world, but it is love that saves him, or so it seems. Donnie Darko has an intelligent script, but it is ambiguous and offers much to chew on.

At school, Donnie is bullied by a teen wolf pack that includes Seth Rogen in an early role, but he’s befriended by sympathetic science teacher Kenneth Monnitoff (Noah Wyle) and English teacher Karen Pomeroy (Drew Barrymore). Pomeroy probably avoids a student crush from Donnie — being fifteen, he thinks about sex all the time — when she orders Gretchen ( Jena Malone), a new student in the class, to sit next to the boy she thinks is the cutest. Guess who Gretchen chooses.

Donnie thinks about death as well as sex and often mentions them in the same breath. When a young friend insists that Smurfette gets it on with all the male Smurfs, Donnie balks. “Smurfs are asexual,” he says. “They don’t even have reproductive organs under those little white pants.” Then he wonders about the purpose of living if you don’t have the equipment. In class they discuss Watership Down, Richard Adams’ 1972 novel about a warren of talking rabbits. Donnie thinks rabbits are cute but oversexed, and ignorant of their own mortality. He doesn’t understand why we should have the same respect for a dead as we would for a person. “Because,” Pomeroy tells him, “the rabbits are us, Donnie,” and it’s hard not to think of Frank.

Donnie grows fascinated with time travel, so Monnitoff gives him an old book by a woman named Roberta Sparrow who was once a science teacher at the school but now lives as a recluse. The schoolchildren call her Grandma Death, and it is unclear whether there is wisdom in her writings or only madness. Donnie, too, seems to suffer from schizophrenia or delusions, but his malady isn’t given a name. This is a film of possibilities, not certainties. Time travel is one of those possibilities. Donnie can seemingly project himself into the future, following a billowing, translucent cord of energy that emanates from the center of his being. The things he sees in these moments may offer clues to his fate, but Donnie, like the audience, has to puzzle them out. He writes to Sparrow, hoping to learn more.

The destinies of Gretchen, Donnie, Sparrow, and other characters come together on Halloween night in a tragic moment that puts a spin on Frank’s prediction about the end of the world. The answers were there all along in messages from Frank, whose nature is revealed, and the writings of Sparrow, who may have solved the riddle of time travel after all. In a repeat of the crashing-jet-engine incident late in the film, Donnie has a chance at salvation.

Though Donnie Darko was made in 2001, it’s set in the 1980s. It is the inverse of a John Hughes comedy, but has plenty of humor of its own, particularly in the way it pokes a finger at society and family life. It takes more chances than a Hughes film, and challenges its audience with its disturbing themes. Donnie’s parents, played by Holmes Osborne and Mary McDonnell, are well-meaning but clueless, having no idea of the depths of their son’s despair. Kelly treats them respectfully, only thumbing his nose at them a little, and he gives one of the most meaningful moments to McDonnell late in the film. Donnie’s older sister, Elizabeth, is played by his real-life sister Maggie Gyllenhaal, lending authenticity to their interactions. Her role appears less significant than it really is.

The Screen is showing a new 4K restoration of the director’s cut, which strengthens some themes and adds segues in the form of long passages from Sparrow’s book as well as some additional footage, but it is less favored among fans who prefer the theatrical version. Both are head-scratchers; the director’s cut is only slightly less so. The acting, tone, and story are top-notch, and Donnie Darko is far better than what you might expect from a first-time director. The film screened at Sundance and then saw a limited theatrical release. Critics raved, while audiences stayed away. Success came later on the home-video market, and it has since achieved cult status.

Nothing Kelly has done since has reaped the praise of his debut. There is a sequel, 2009’s S. Darko, centered around Donnie’s younger sister, Samantha, but it did not involve Kelly and was panned by fans and critics alike. The original film, however, boasts a stellar cast, striking photography, excellent digital effects, and a killer soundtrack with ’80s-era songs by The Church, Tears for Fears, Oingo Boingo, and Joy Division, to name a few. In the universe of Donnie Darko even the names of bands on the soundtrack, like Echo and the Bunnymen, seem intentionally self-referential. As The Church sings, it’s something quite peculiar.