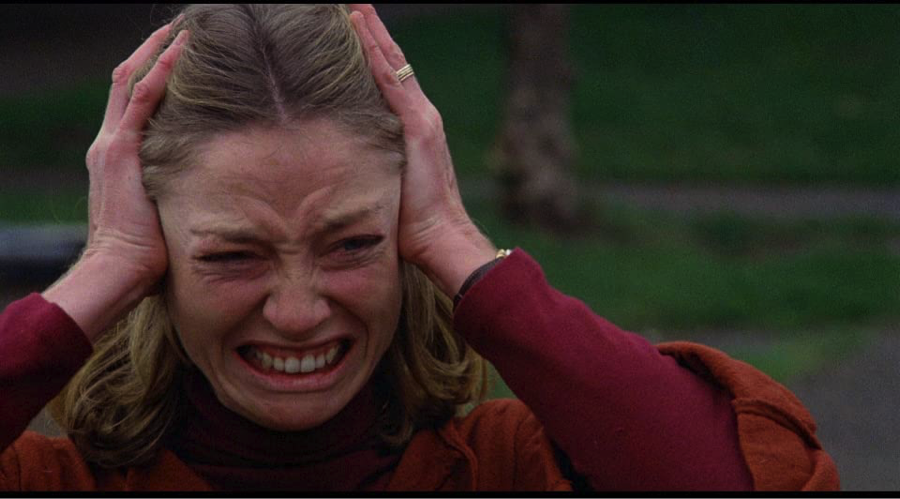 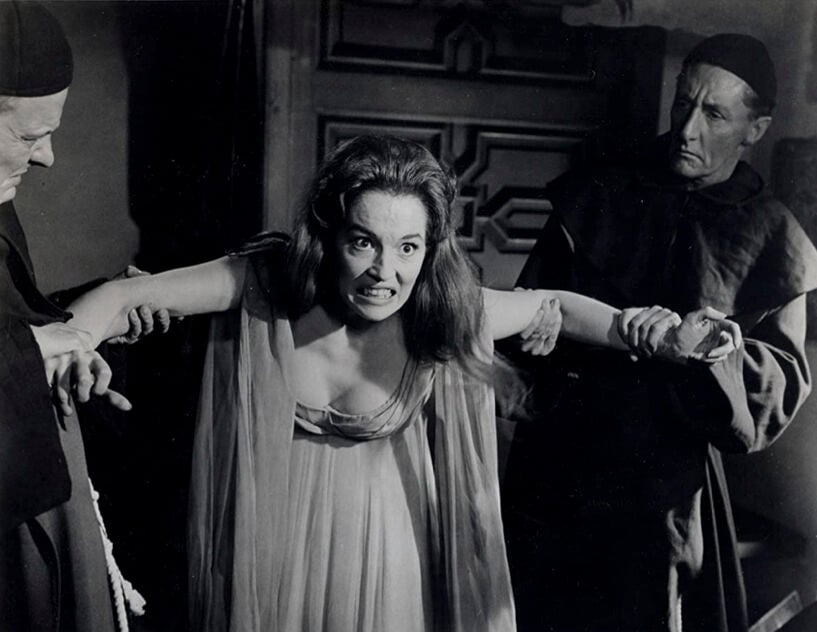 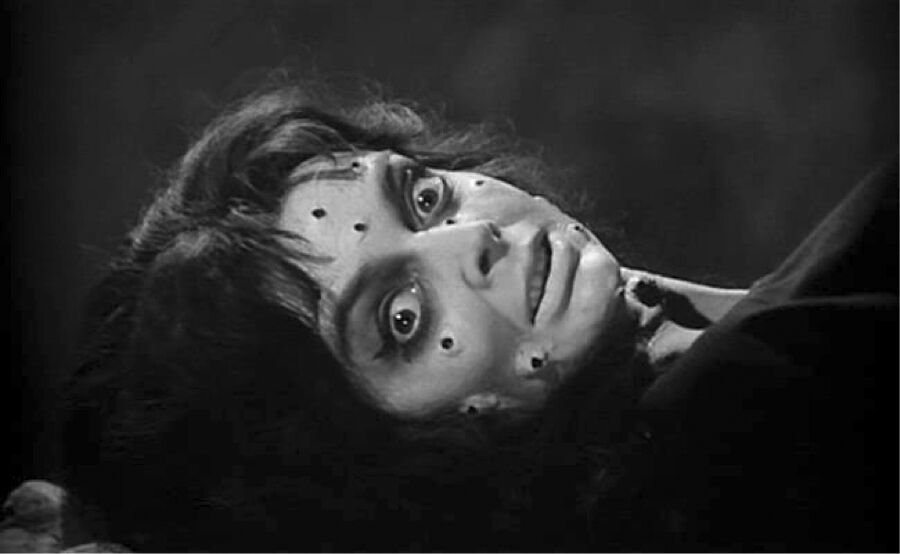 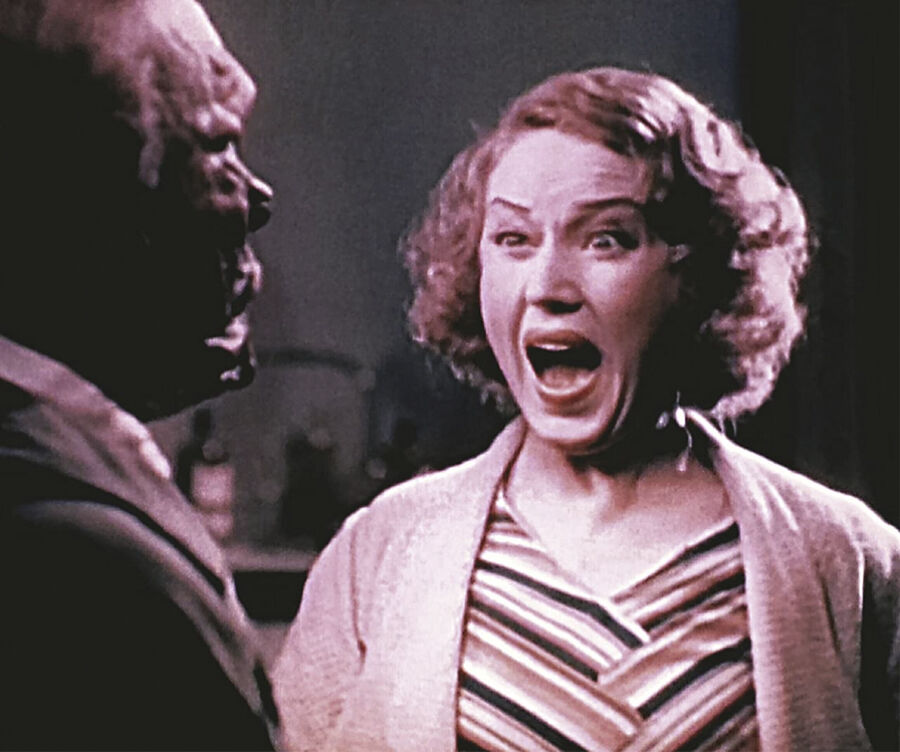 A lot of actresses got their start appearing in low-budget thrillers and horror pictures. Some of them, such as horror icon Barbara Steele (The Pit and the Pendulum, 1961), stuck with it, rising to become luminaries of the genre. Others moved on to work in more palatable projects with greater mass appeal. But where would horror fans be without those scream queens — unduly terrorized, victimized, and otherwise maltreated — to give us a place to hang our hearts when it’s not on our throats? We need someone we can identify with as whatever malevolent force challenges against their wholesome goodness. This list honors just a few such darlings of the dark, and it wasn’t easy to narrow it down. For all those actresses who didn’t make the cut but received careful consideration — Faith Domergue, Hazel Court, Caroline Munro, Linda Blair, Jamie Lee Curtis, Adrienne Barbeau, and Angela Bettis among them — Pasatiempo salutes you. Next time, ladies ... if you survive.

No one expresses sheer, abject terror quite as well as Veronica Cartwright. Whether she’s being pursued by a xenomorph in Alien or by extraterrestrials who’ve assumed human forms in director Philip Kaufman’s Invasion of the Body Snatchers, her trembling fright and bug-eyed panic are palpable. In Invasion, she gives it her all. In this remake of the 1956 classic of the same name, aliens start replacing human beings in San Francisco, growing the bodies in plant-like pods. And Nancy Bellicec (Cartwright) first registers her disgust when she and her husband Jack ( Jeff Goldblum) discover one such grotesque body, covered in fibers, growing in the mud baths she operates. The humanoid bears a suspicious resemblance to Jack. But Bellicec’s real shock (and the film’s most terrifying moment) comes late in the film when she approaches a friend in the mistaken belief that he’s escaped the horror, only to discover that he’s no longer human. Her devastating cries strike a bleak note of hopelessness.

Cartwright, a British-born American actress, really knows how to channel panic and anxiety (check out her death in Alien). She can summon the most intense of human emotions, cranking them up to 11. There’s no need for a desperate Kevin McCarthy (of the original) shouting “you’re next” at the audience when Cartwright’s onboard (although he does have a cameo). The authenticity of her performance is enough to make it all too real. Horror, science fiction, rated PG, 115 minutes, YouTube, Vudu, Apple TV, iTunes

When Megan Halsey (Barbara Crampton), daughter of the medical school’s dean at the fictional Miskatonic University, walks in on an experiment involving her fiancé’s dead cat, she’s plenty mortified. But her troubles are just beginning. Before Re-Animator is over, she’ll see her own father changed to a zombie, and she’ll become the hapless victim of the lascivious and demented Dr. Hill (David Gale), whose decapitation at the hands of an adversary doesn’t stop him from seeking revenge.

Re-Animator, director Stuart Gordon’s classic comedy of horrors, features memorably campy performances by Gale and Jeffrey Combs as rival scientists seeking the secret to re-animating dead tissue. Combs, as Herbert West, has found the answer, but Hill stands in his way, which leads to an over-the-top gore-fest of murder and mayhem. And Halsey, a pretty blonde, is the innocent victim. Re-Animator made Crampton a horror icon, due in part to her controversial scene of exploitation as the sexualized victim of Hill’s disembodied head. Fans who’ve seen the unrated cut won’t soon forget it. It’s a brave performance by Crampton, who never shied away from the horror genre after this but gamely embraced it, into the 21st century. Comedy, horror, science fiction, not rated, 104 minutes, Hulu, Amazon Prime, Google Play, Apple TV

Sultry redhead Barbra Shelley appeared in only a few thrillers for the British studio Hammer Films, but left an indelible mark on each of them with her believable performances, classic bearing, and the regal air she brings to each of her roles. In Dracula: Prince of Darkness, a sequel to Hammer’s Horror of Dracula (1958), she plays Helen Kant, an English tourist sightseeing in the forbidding European village of Karlsbad. Despite warnings to stay away, she and her party find themselves as the unwitting guests at the castle of the long-dead Dracula. Helen feels a sense of apprehension and an inexplicable feeling that they’re all in grave danger. Her instincts turn out to be correct. In a horrifying moment, she discovers the body of her own husband, who’s been used in the rite of sacrifice meant to reawaken the Prince of Darkness himself. She barely has time to register shock before she’s face to face with Dracula (Christopher Lee) and succumbs to his hypnotic gaze.

Shelley goes from victim to victimizer as she vamps it up under the auspices of her newfound master. Fortunately, the camera affords the audience one last glimpse of her lovely face once her spirit’s been freed from the evil possessing it. Before that, she writhes in wild-eyed mortal fear, forcibly held down while Father Sandor (Andrew Keir) administers the stake. Horror, not rated, 90 minutes, Amazon Prime, Shudder, DirecTV

In the typical fashion of an evil witch, Asa Vajda (Barbara Steele) curses the inquisitors who’ve condemned her to death, and she vows that one day she’ll have vengeance. It isn’t enough that she’s about to be burned at the stake; she’s punished first by nailing a spike-laden mask to her face. On the 200th anniversary of that fateful day, her spirit is accidently awakened by a curious doctor visiting her Moldavian tomb while en route to a medical conference. To make the reconstitution of her physical being complete, Asa needs the blood of her descendent, the virginal Princess Katia (also played by Steele). In the duel role that catapulted her to international stardom, Steele gets to play the innocent but haunted victim one moment, screaming in terror as shadowy figures materialize from hidden chambers in the walls of her family’s castle, to laughing manically and issuing commands in the next as the witch.

Known for her long raven hair, sensuous lips, and brown eyes, the British-born Steele epitomized the figure of the dark beauty. Adept at playing good as well as evil, she rose to prominence in the horror genre, appearing in several Italian-made productions at the height of that country’s gothic golden age. In fact, she appeared in so many that somebody really needs to do a box set blu-ray release with all the bells and whistles (I’m looking at you, Criterion). In addition to Mario Bava, director of Black Sunday, she worked with other luminaries of Italian horror, appearing in Antonio Margheriti’s Castle of Blood (1964), for instance, and Riccardo Freda’s The Horrible Dr. Hichcock (1962). Horror, not rated, 87 minutes, Dailymotion, Amazon Prime, Shudder

Poor Ivan Igor (Lionel Atwill), owner and operator of a London wax museum. His masterpiece, a wax figure of Marie Antoinette, melted into a puddle when an act of arson left his museum a burned-out ruin. Twelve years later, the maimed Igor seeks to reopen the museum in the 1930s New York. It’s the bad luck of Carlotte Duncan (Fay Wray), whose fiancé works as Igor’s protégé, that she’s the spitting image of the beloved statue he lost to the flames. Igor’s demented plan to recreate his Marie Antoinette involves first submerging Duncan in a pool of hot wax while she’s still alive, no doubt to preserve the freshness of her features.

Mystery of the Wax Museum is not as well-known as the 1953 remake, House of Wax, which features an homage to Wray in the form of a wax figure. But there is one unforgettable moment that’s on a par with the unmasking of Lon Chaney as the Phantom of the Opera (1925). Duncan pounds at Igor’s seemingly normal face as he holds her firmly in his grasp. It falls away in chunks of wax to reveal scarred, fire-ravaged visage beneath. Terror fills her eyes, and she belts out a fear-driven cry.

Wray’s most memorable and iconic role was as vagabond-turned-starlet in Merian C. Cooper and Ernest B. Schoedsack’s monster epic King Kong. But she appeared opposite Atwill in three thrillers before taking on the role that made her famous. Two of them, Doctor X (1932) and Mystery of the Wax Museum (1933), were helmed by celebrated director Michael Curtiz (Casablanca, 1942). Wray does plenty of screaming in both, but not before building audience sympathy with her sex appeal, sultry voice, and vulnerable but intelligent persona. Her screams are as legendary as her smashing good looks. She’s not just another scream queen. She’s the patron saint. Horror, mystery, thriller, not rated, 77 minutes, DirecTV