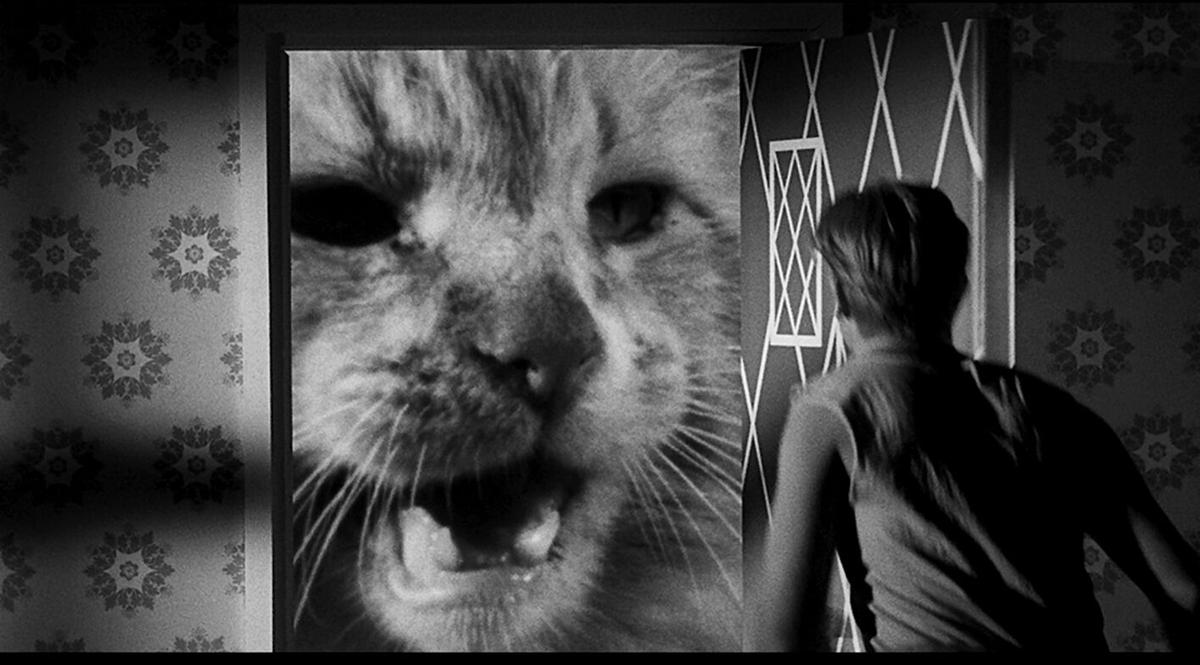 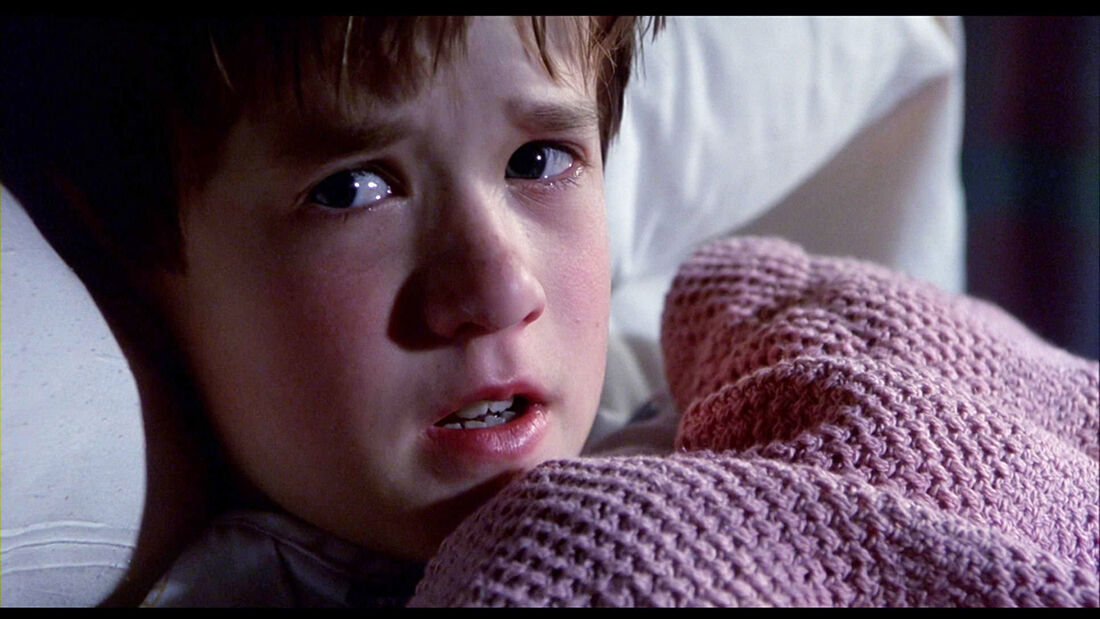 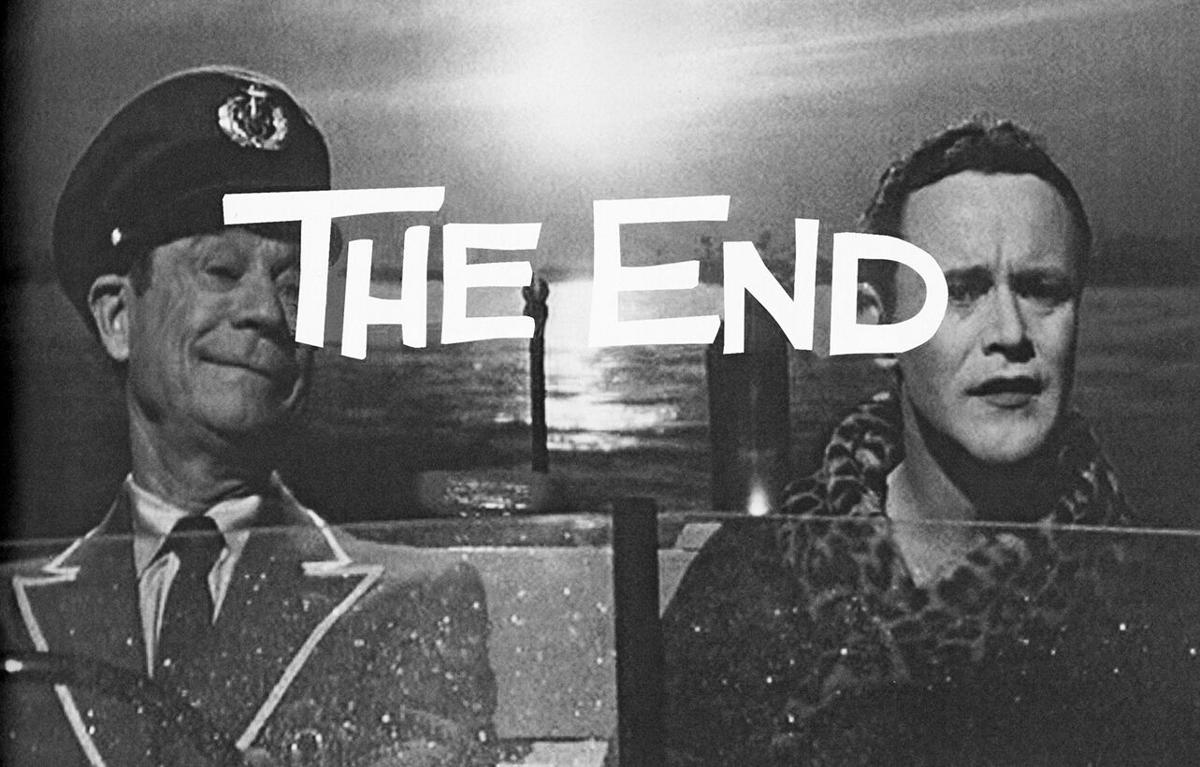 Helmed by stalwart sci-fi director Jack Arnold (Creature from the Black Lagoon) and penned by Richard Matheson (I Am Legend, Stir of Echoes), The Incredible Shrinking Man chronicles the fate of Scott Carey (Grant Williams) after he encounters a radioactive mist while on a boating trip. Carey starts shrinking slowly over a period of months.

At one point, he finds himself trapped in the basement because he’s so small that his wife Louise (Randy Stuart) can’t see him or hear his faint pleas for help. And in that basement, his greatest foe is a common household spider that tries to win the crumbs of a piece of stale cake.

Even if Matheson hadn’t written a compelling allegory for the emasculation of the ‘50s-era nuclear family man, so separated from his primal roots that the struggle to merely assert himself is paramount, Carey’s final soliloquy is enough to cement the film among the classics.

Ultimately so small that he can fit through the openings in the window screen, he ventures into his backyard, which has become an alien universe of danger and wonder. He realizes that the infinitely small and the infinitely vast eventually meet, “like the closing of a gigantic circle.”

“I had presumed upon nature,” he narrates. “That existence begins and ends is man’s conception, not nature’s. And I felt my body dwindling, melting, becoming nothing. My fears melted away. And in their place came acceptance. All this vast majesty of creation, it had to mean something. And then I meant something, too. Yes, smaller than the smallest, I meant something, too. To God, there is no zero. I still exist.” Science fiction, not rated, 81 minutes, Amazon Prime, Vudu, DirecTV

Parody happens for a reason, and there are few sequences in film history more frequently parodied than the ending of The Sixth Sense. Like the training montage in Rocky (1976), countless filmmakers have riffed on, poked fun at, or restaged their own version of the reveal in the closing minutes of the film. When the film premiered in 1999, though, the end truly caught people off-guard and temporarily changed expectations for storytellers.

[Spoiler alert ahead] The surprise ending of The Sixth Sense works well because the entirety of the film is a clever setup that holds up on first and second viewings. (Into the third watch, when there are no more shocks to be had, it’s easy to see how it became so parodied.) Writer/director M. Night Shyamalan carefully placed clues throughout the film that make the ending seem all but inevitable to the trained eye. At the beginning of the film, Bruce Willis playing child psychologist Malcolm Crowe is shot in the stomach by a former patient (Donnie Wahlberg, in a brief role). Afterward, the film leaps forward and we are led to believe that he survived. Unless, we’re paying attention to the little details. Crowe wears a version of the same outfit throughout the film. Core Sear (Haley Joel Osment) is a child who is terrified of dead people. And, Crowe’s wife can’t really see him, even though he’s standing right there. Crowe has been dead the whole time. It all makes sense at the end, more or less.

The ending of the film was so successful that Shyamalan was almost trapped by it. For several films afterward, he was expected to be the king of the twist and turn in plot. Ultimately, that’s not really a sustainable approach to filmmaking or storytelling, because when you’re always going for a shock at the end, it’s easy to lose the energy in the middle. Science fiction/horror, Rated PG-13, 107 minutes, Amazon Prime, Showtime Anytime

Mark Tiarks /For The New Mexican

Writer-director Billy Wilder’s Some Like It Hot routinely appears at the top in rankings of best film comedy of all time, and its final line is considered one of the greatest ever penned.

To woo Monroe, Curtis pretends to be an aristocratic millionaire, impersonating Cary Grant, while Lemmon can’t seem to shake the marriage-minded Brown. After the pursuing gangsters are rubbed out in another gangland slaying, Monroe, Curtis, Lemmon, and Brown jump into Brown’s speedboat, heading to his yacht.

Piloting the boat, Brown counters each of Lemmon’s attempts to discourage him. “I smoke! I smoke all the time.” “I don’t care.” “I have a terrible past. For three years now, I’ve been living with a saxophone player.” “I forgive you.” “I can never have children.” “We’ll adopt some.”

At wit’s end, Lemmon rips off his wig and in his masculine voice says, “Osgood, I’m a man.” Brown glances at him and nonchalantly says, “Well, nobody’s perfect.” That elicits a classic double take from Lemmon, who then seems resigned to his fate as “The End” appears.

Ironically, Wilder considered “Well, nobody’s perfect,” the classic line, just a placeholder to be jettisoned as soon as he and writing partner Izzy Diamond thought of something really good. Fortunately for the millions of moviegoers who’ve been convulsed with laughter by the placeholder, they never did. Comedy, Rated G, 120 minutes, Amazon Prime, Apple TV, Fandango, Santa Fe Public Library, Vudu