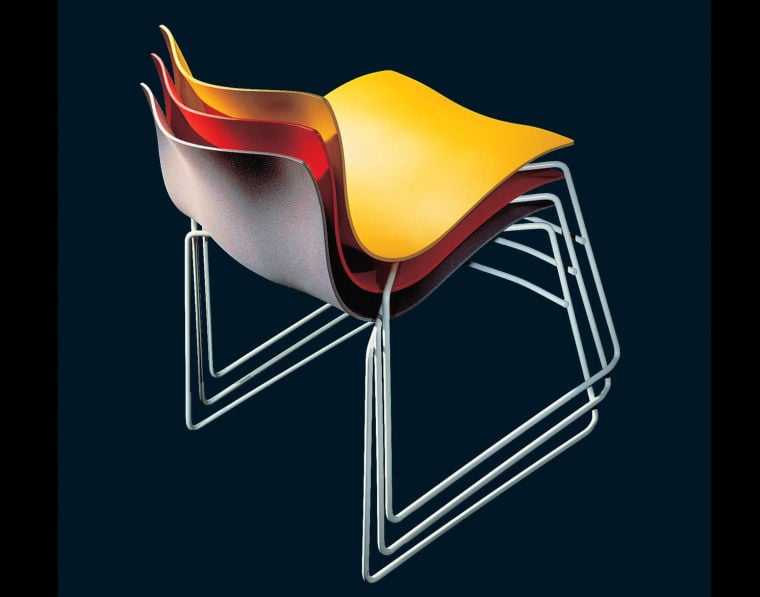 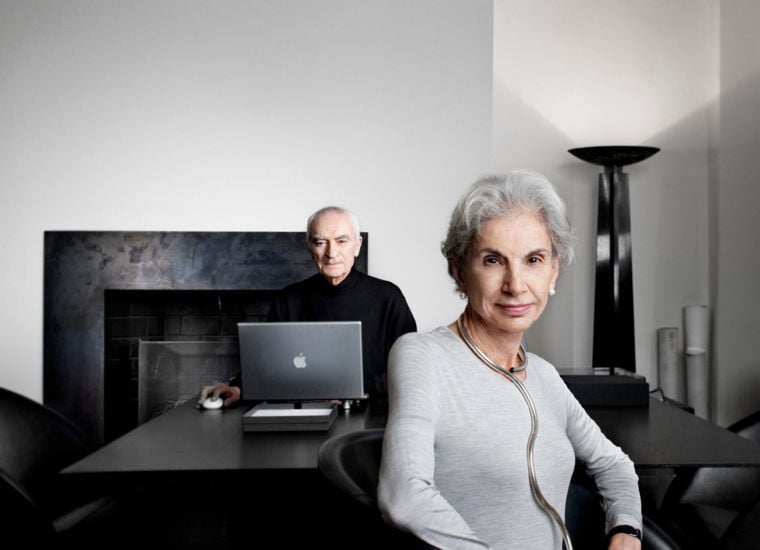 Photo of Massimo and Lella Vignelli by John Madere 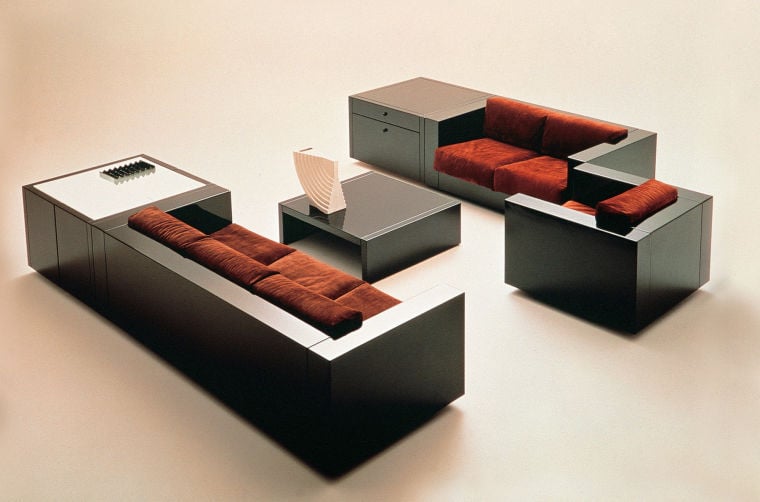 Photo of Massimo and Lella Vignelli by John Madere

Massimo and Lella Vignelli may not be household names, but everyone knows their work; it includes the logos of J.C. Penney, American Airlines, Knoll, and Bloomingdale’s, the design of Ford’s blue oval, and the brochures for the national parks. The couple “brought the freshness of Italian design” to the United States in the 1960s, according to the 2012 film Design Is One, which opens Friday, Nov. 8, at the Center for Contemporary Arts. Besides their iconic graphics, the Vignellis have designed teapots, jewelry, lamps, glassware, books, decanters, clothing, cutlery, and architectural spaces including the Bauhaus-reminiscent Vignelli Center for Design Studies at the Rochester Institute of Technology.

Lella is an architect, born in Udine, Italy, to a family of architects. She is the “grounding” force in their collaboration, the one who brings her husband’s creative flights down to the realm of possibility. “I try to be really very rational and explain why the thing doesn’t work or is not right. The trust came out with the years. We were much more competitive when we were young,” she says in the film. “It is important to bring the objectivity to Massimo, because he is very subjective.” The two often bicker and shout at each other; it’s part of their process. “We are absolutely complementary,” Massimo avers.

He got his start working as a draftsman at Castiglioni Architects in Milan and was soon expanding into diverse fields. “The boundaries between design, product design, architectural, or theater design or furniture design or graphic design or packaging were not really existing, and that to me was the most exciting thing,” he says.

In 1965, after moving to the States, the Vignellis co-founded the American branch of the design firm Unimark International. They established Vignelli Associates in New York six years later. An early iteration of Massimo’s now-famous devotion to the Helvetica typeface came with his 1967 commission to redesign the furniture company Knoll’s graphic identity. The man is a purist when it comes to typefaces, thousands of which are available to computer-using designers and writers today. “There are two basic families: serif and sans serif,” Massimo says. “In the serif family — the one with the feet — there are only three good ones: Garamond, Bodoni, and Times Roman. In sans serif you have Akzidenz Grotesk, the first one, out of which came Helvetica and Univers, then you have Futura and another half a dozen that I consider very good, and that’s really it.” He touts Helvetica as “the best visibility one can get. … You can’t beat it for clarity and legibility, for strength.”

“He’s such a classicist,” says Winterhouse’s Jessica Helfand, one of more than two dozen authorities that filmmakers Kathy Brew and Roberto Guerra employ in the film. “Always the same few typefaces, but always used with such grace, and so timeless.”

Another attribute of the typography work that also shows in the Vignellis’ other products is simplicity. In the film, Massimo shows off a piece of his office furniture. “I did this table at a time I was obsessed with the cost of furniture. The top is just a piece of steel; these cut marks are there because there is no finish. We did the legs by using pipes. … For me that is really what expresses the entire intention of this table. This top is just resting on these four pipes, basically.” The legs on the production models of this design are more refined, and the top is marble or glass.

“I’ve been really lucky in my life to be exposed to different materials with in-depth experiences,” he says. The designer worked for years for a Venice company, creating a line of glass lighting fixtures, and then immersed himself in silver while developing flatware and holloware in the U.S. He emphasizes that he has always been interested in “bringing craft and design together.” Among the designs by Lella are a necklace of large hollow-metal cubes. “I wanted something three-dimensional and something very dramatic,” she says. Later she came up with an elegant, snaky silver tube you can coil into two rings around the neck or make one ring and let the rest of the piece hang as a curvy jewelry form down the front of the shirt. The film-makers show her with a pair of beautiful silver vessels that were conceived with the flexibility to be used either as vases or candleholders. “That’s why it’s exciting to work with products, because you develop as you go,” she says. “You keep working with your mind.” The couples’ interior for St. Peter’s Church on Lexington Avenue in Manhattan is flexible as well, designed with movable pews and convertible furniture. The silver chalices, candlesticks, and other liturgical pieces were also created by the Vignellis.

In another segment, the two are shown serving and eating pasta using a line of colorful, plastic dinnerware they designed for the Heller firm. “They’re as fresh today as when we introduced it in 1971,” Alan Heller says. Another long-laster is the Knoll Handkerchief Chair, which has been in production for 30 years.

The couple has designed showrooms for Poltrona Frau, Steelcase, and Hauserman. Lella recounts that for Hauserman (the Los Angeles company that manufactures movable walls), “We had the luck of having just gone to the Castelli gallery to see an exhibition of [Dan] Flavin, so we proposed to the client doing this [a colorful, Flavin-like treatment] in the showroom, and he understood. It was magical. … It was a great treat, really, working with art.”

“Design is not art,” her husband stresses. “Design has a utilitarian purpose always: legibility, comfort, you name it.”

The showroom projects have offered opportunities for Lella to exercise her training in architecture — a discipline that has been relatively slow to accept women in this country. “In Italy the women’s liberation was much stronger than here. So, if you were an architect, you were an architect. Nobody would try to take you down. Absolutely, no way. So I was surprised here, really surprised,” she says in the film. “There is still now this sort of looking down at the woman.”

One of the most important Vignelli projects was the redesign of the New York subway map and the signage for the subways. Massimo said the old map was like “soup, a spaghetti plate” because of all the words and graphic elements crowded together. Their product, like the company logos, are achievements in minimalistic clarity. “The Vignellis have been messiahs in terms of making the complex clear,” comments Richard Grefé of the American Institute of Graphic Arts.

Massimo is known as having imported a grid-based concept to the U.S., and, although it is for the most part invisible in the finished work, he uses it religiously. In one scene from Design Is One, he is shown using a scaleograph tool to draw in grids of vertical rectangles. His brochures for the national parks are all based on grids, and all feature the name of the park — such as Acadia and Bandelier — in white (Helvetica) on a thick black stripe.

He has designed a series of books on the work of architect Richard Meier, another devotee of the grid and a lover of the line of clothing the Vignellis have designed. These are garments “not related to fashion, but related to the body,” as Massimo puts it. They’re comfortable, and made to last. “I happen to hate obsolescence as one of those things that are unethical in our society. I’ve been wearing my clothing for the last 15 years.”

The important aspects of their work include meaning, consistency of expression, and impact — “I cannot stand limp kinds of expressions, and we like it to be intellectually elegant,” Massimo says. “And then I like it to be above all timeless, so that means non-trendy, it means something that will last a long time because we feel a great responsibility to the client and the society.” ◀

“Design Is One: Lella & Massimo Vignelli” (4 chiles) opens Friday, Nov. 8, with a 7 p.m. screening presented by the Friends of Architecture Santa Fe, including an interview with filmmaker Kathy Brew via Skype. The screening takes place at the Center for Contemporary Arts (1050 Old Pecos Trail). Tickets are $10; call 505-982-1338.