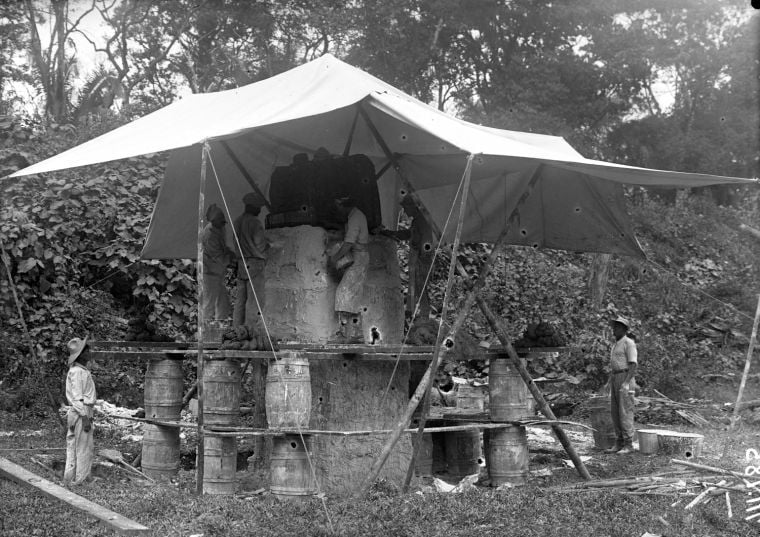 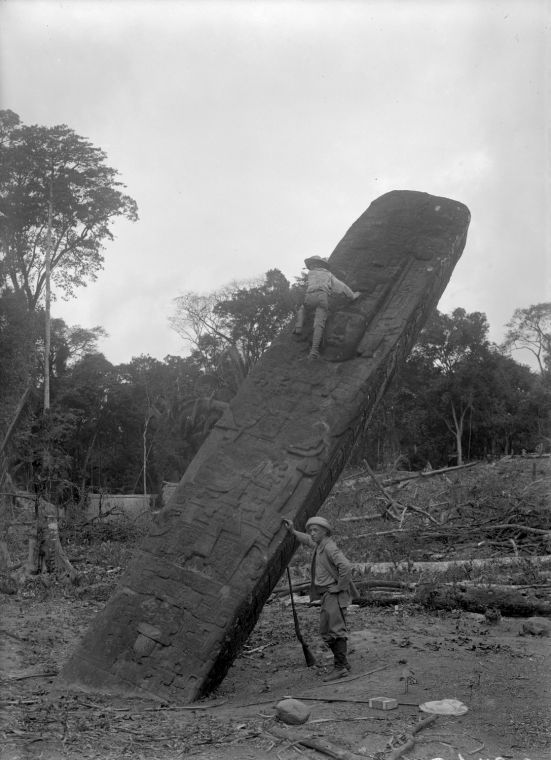 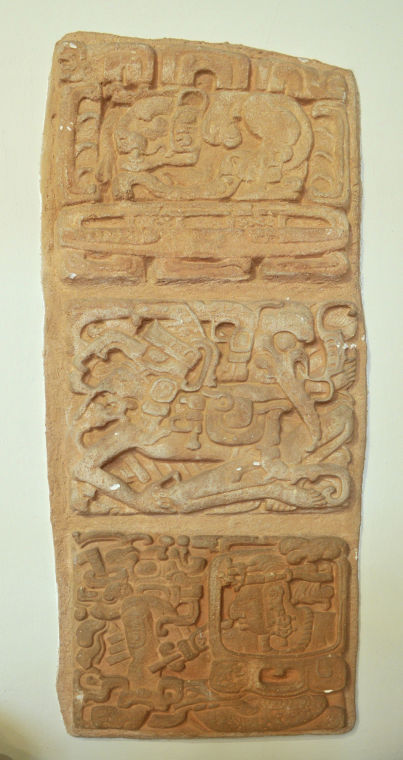 A cast of three glyphs from Quiriquá Stela D made in 1914, now in the Museum of New Mexico Foundation office in Santa Fe; photo Clyde Mueller/The New Mexican

A cast of three glyphs from Quiriquá Stela D made in 1914, now in the Museum of New Mexico Foundation office in Santa Fe; photo Clyde Mueller/The New Mexican

Simulacrum, simulacrum on the wall: casts of the ancient Maya monuments of Quiriguá

Mounted into the wall in the first-floor conference room of the Museum of New Mexico Foundation office on Lincoln Avenue is a cast of three glyphs from the beginning of the inscription on the east side of Stela D at the ancient Maya city of Quiriguá, Guatemala. Stelas are slabs of stone used by the ancient Maya rulers for public statements of their performance of rituals and historical events. The three glyphs are part of the statement of the stela's dedication by the Quiriguá king K'ak' Tiliw, on Feb. 19, 766, though they are not contiguous on the monument but separated from one another by two other glyphs. The panel is a pastiche of hieroglyphs assembled for their aesthetic qualities rather than for their documentary function. It reminds us that casts, like all reproductions, are mediated by the hand of the artist and cannot be assumed to be absolutely faithful. The room where this work hangs was the sitting room of Edgar Lee Hewett, the founding director in 1909 of both the Museum of New Mexico and the School of American Archaeology. The cast was a memento of one of the most exciting passages in Hewett's career — the Quiriguá archaeological project and the Panama-California Exposition of 1915.

The Museum of New Mexico and School of American Archaeology (now the School for Advanced Research) began work at Quiriguá in the spring of 1910, a year after the United Fruit Company acquired a large tract of jungle where the ruins lie, in the Motagua Valley of eastern Guatemala, for development into banana plantations. For four seasons, Hewett and his team — including such future luminaries as Sylvanus Morley, Earl Morris, Jesse Nusbaum, and Neil Judd — worked at the site. They had the jungle cleared by United Fruit employees on loan and conducted limited excavations and reconstruction of several buildings, as well as surveys of the surrounding region. From the start the project was plagued by financial difficulties. Hewett had to raise all the funds for each season.

Managing the expectations of his donors also proved challenging. The St. Louis Society of the Archaeological Institute of America became disillusioned with what its members saw as the project's glacial pace and the lack of archeological specimens recovered. Hewett led them to believe that his team would recover important ceramics, sculptures, and other artifacts, a part of which (they were promised) would be exported for display at the St. Louis Art Museum. Instead, the first two seasons were occupied mainly with clearing the site of trees and vegetation and making a new map and an extensive photographic documentation by Nusbaum of the sculptures. Then Morley had an article on the project published in The National Geographic Magazine and failed to mention the St. Louis Society. The group did not renew its funding, but fortunately Hewett had another way to continue work at Quiriguá.

In 1910, San Diego land developer David C. Collier asked Hewett to oversee the ethnological and archaeological exhibits at the future Panama-California Exposition. Ostensibly the fair was to celebrate the opening of the Panama Canal, but like all such world's fairs, beginning with the Crystal Palace Exposition in London in 1851, it was also an opportunity for the host city and country to showcase their industries and resources, including what we now call cultural heritage. The exhibits Hewett planned included everything from dioramas of cavemen to Native American baskets and arrowheads, photographs by Edward S. Curtis, and archaeological displays. The only apparent relevance Quiriguá had to San Diego and the fair is that Hewett was working there and he promised spectacular exhibits. This time he delivered.

Making casts of archaeological objects is a venerable documentary practice. From a scientific perspective, a good cast registers the exact surface of the sculpture and is essential for the study of imagery and texts, whether they are in Egyptian, Greek, Latin, Chinese, or Maya. Casts are also a snapshot of a moment in time, and they often preserve details otherwise lost to erosion, acid rain, or pillage. But casts of archaeological objects have also been a staple of public entertainment.

The first cast of the Aztec Calendar Stone was made in 1823 by English showman William Bullock and displayed as the centerpiece of the first exhibition of Mexican antiquities in Europe, held not in the British Museum but at the Egyptian Hall in London, a venue for popular entertainment. Hewett and his collaborators at the Panama-California Exposition considered themselves scientists, but their audience was most concerned with being entertained and learning a little something at the same time. Travel to exotic lands by proxy was an essential characteristic of world's fairs, and it remains so with today's international expositions. It was common at the fairs of the late 19th and early 20th centuries to encounter pavilions from distant countries — Japan, China, Mexico, and Peru — interspersed with buildings dedicated to women's crafts or displays of the latest cotton gin from Iowa. As few of the visitors to these fairs would ever actually set foot in Quiriguá, the casts of archaeological monuments took on a reality far beyond their basic status as copies. They functioned as metonyms not solely for ancient Maya sculpture but for American antiquity in general. At the same time, the Quiriguá casts also functioned as tangible evidence in a time of renewed assertion of the Monroe Doctrine of U.S. control of all Western Hemisphere resources, even archaeological sites and intellectual property.

Although the 1914 season at Quiriguá was sponsored not by an academic institution but by the fair, it arguably produced the most enduring contribution of all the seasons: the casts. No archaeological report was ever published on the work undertaken between 1910 and 1912 (no work was done in 1913), and no field notes survive. Hewett and Morley published a handful of articles on the project that were illustrated by Nusbaum photographs. The rich Nusbaum archive was otherwise poorly known and underutilized. All of his images have now been cataloged and scanned and are available for viewing on the Photo Archives page of the Palace of the Governors/New Mexico History Museum website (www.palaceofthegovernors.org/photoarchives.html). Nusbaum was not on the 1914 expedition to Guatemala; Carlos Vierra served as photographer. In addition to Vierra, the crew included Morris, Judd, Ralph Linton, Wesley Bradfield, and Anthony Poli, a sculpture-casting expert brought from the East.

The San Diego casts were not the earliest made of the Quiriguá sculptures. English gentleman explorer Alfred P. Maudslay worked at the site for four seasons between 1881 and 1894 and made many paper squeezes and plaster piece molds of the monuments. The former technique involves casting from the negative image formed by pounding wet paper into the sculpture surface and then letting it dry. Piece molds are individual blocks that can be assembled into a complete mold, which is then used to make a cast of the monument.

Judd devised a new method of making casts of sculptures, which he described in an article published in American Anthropologist in 1915. It involved a process like lost-wax casting, but with glue substituting for the wax. First, an inch of fine mud was applied to the monument (the Plasteline he brought to Guatemala having been impounded in customs). Then a frame with supports was built to allow the application of plaster segments, four per level of the cast. The plaster was then removed, one level at a time, and the mud was cleaned from both the monument and plaster shell. When the plaster supports were reapplied to the monument, with the frames of wood that maintained their relative distance from the stone's surface, they left a cavity equal to the thickness of the clay, just as in lost-wax casting, in which a cavity between the clay shell and the interior form is left after the wax is melted. Judd and his team then poured the heated liquid glue into the negative space between the support and the stone surface. The glue hardened overnight and could be removed in the morning. These glue molds were then be used to make plaster casts.

Jungle conditions were punishing. Not only was the glue — an animal-gelatin derivative — sensitive to heat and humidity, but tiny worms on-site loved to eat their way through it. And when the molds were used to make casts, the heat from the curing plaster would melt them in minutes, though usually not before their form was registered. The monuments themselves also presented challenges. They had to be cleaned of lichens and algae, which had grown back since 1910, when Hewett's team first cleared the site. Then there was Stela E, which at 27 feet is the tallest Maya monument. In 1914, it was listing 13 feet from the perpendicular, the result of a weakened foundation. It's hard to imagine how they poured the glue for the underside. In four months Judd and the others made casts of eight monuments (Stelas C, E, D, K; Zoomorphs B and P; and Altars L and M). They planned to make more, but as increasingly frantic letters from Judd and Morris to Hewett — preserved in the Hewett Papers at the Fray Angélico Chávez Library at the New Mexico History Museum — show, the $5,000 allotted for the project was expended quickly. No more funds were forthcoming, and the United Fruit Company repeatedly cut off the group's credit.

Judd's method of casting was superior to those that had been used previously in Mexico and Central America. Since it was applied as a liquid, the glue registered the sculpture surface much more accurately than paper squeezes did. Judd noted that Maudslay's cast of Zoomorph B, now in storage in the British Museum, required 600 piece molds and three months to complete. The glue molds of the same monument required only 11 sections and were finished in 15 days. At the end of his article, Judd mentioned that the casts would be removed to the halls of the School of American Archaeology in Santa Fe, then located in the Palace of the Governors, after the close of the San Diego exposition. A century later, we know that the only Quiriguá cast that made it to Santa Fe was the panel in Hewett's house. The other casts were shipped directly from Guatemala to San Diego, where they remain on view today.  ◀