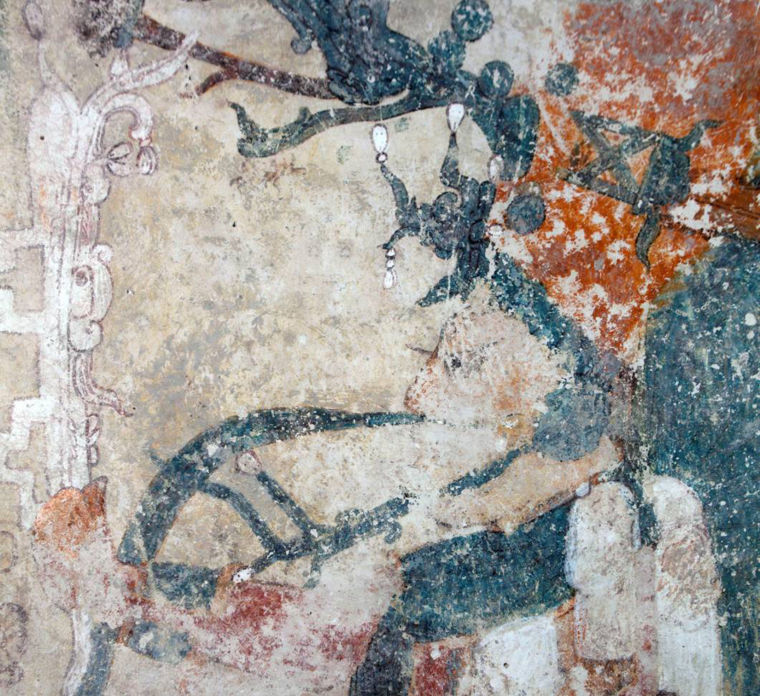 The king of Xultún as painted on the wall of a private residence; photo by William Saturno, courtesy Proyecto San Bartolo-Xultún 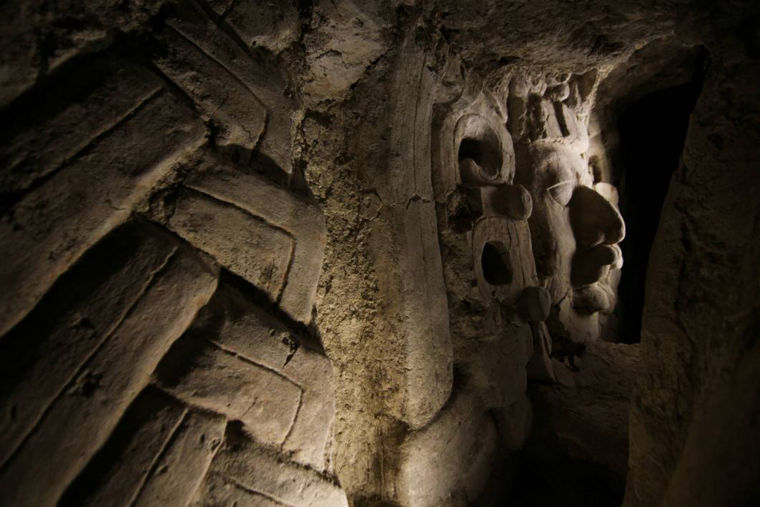 Stucco portrait of a king or deity on the outside of a building at the Maya city of Xultún; photo by Pablo Duran, courtesy Proyecto San Bartolo-Xultún 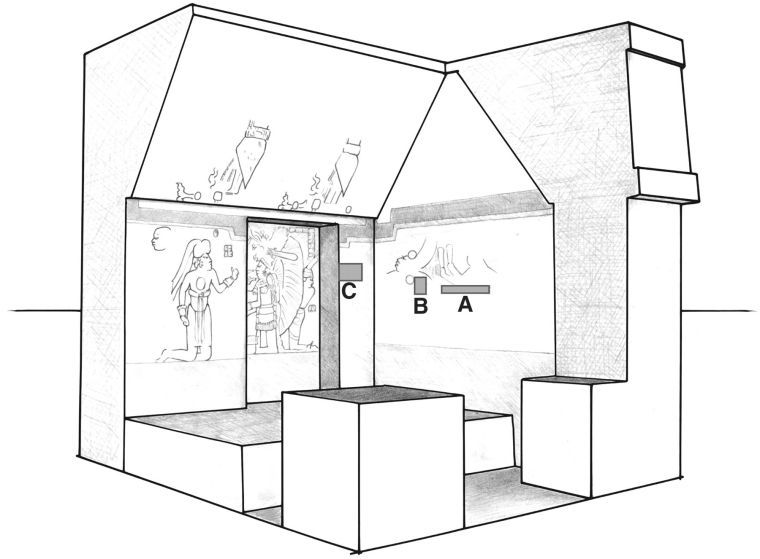 Locations of the painted astronomical calculations in the mural building at Xultún. 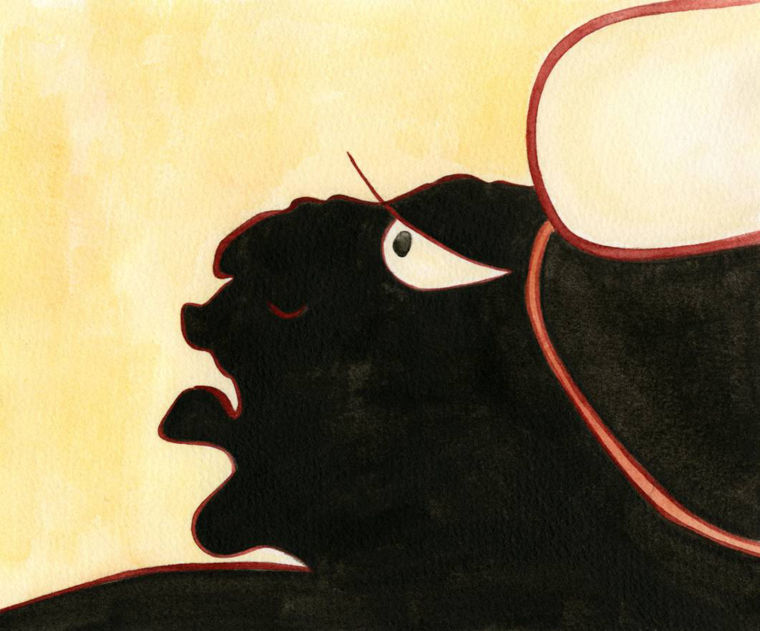 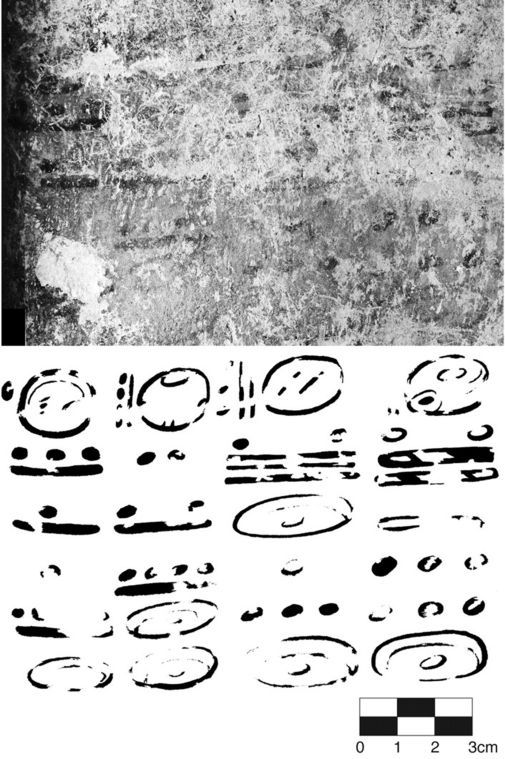 Column of dates and numbers separated by periods of six months.

The king of Xultún as painted on the wall of a private residence; photo by William Saturno, courtesy Proyecto San Bartolo-Xultún

Stucco portrait of a king or deity on the outside of a building at the Maya city of Xultún; photo by Pablo Duran, courtesy Proyecto San Bartolo-Xultún

Locations of the painted astronomical calculations in the mural building at Xultún.

Column of dates and numbers separated by periods of six months.

In 2010, while exploring a looter’s trench in a building at the ancient Maya ruins of Xultún (pronounced “shooltoon”) in Guatemala, a Boston University undergraduate named Max Chamberlin discovered traces of paint on the wall of an exposed room. When the archaeological team led by William Saturno, assistant professor of archaeology at the same university, investigated, they discovered that all four walls of the room were painted with bright murals. Glyphs painted on the wall suggest that the murals date to about 814. One wall at Xultún has a niche originally screened by a curtain, and within the archaeologists found the image of a seated Maya king wearing a huge headdress of quetzal feathers. Two other walls show seated and kneeling men. One holds a painting or drawing implement and is named in a caption in Maya hieroglyphs as Younger Brother Obsidian. The fourth wall shows several groups of painted and incised (in the plaster) glyphs for days and columns of numbers. The images would prove to be the earliest-known Maya astronomical tables, painted on a wall that was frequently whitewashed and that seemed to have served as a blackboard. One of the calculations casts 2.5 million days, or 7,000 years into the future, and is yet more evidence dispelling the idea that the Maya calendar ended four weeks ago, on Dec. 21, 2012.

Although there are traces of painting inside many ancient Maya buildings, well-preserved murals are rare discoveries. Probably the most famous Maya murals were discovered by Giles Healey in 1947 at a site in the Lacandón rain forest of Chiapas, Mexico. They were named Bonampak, meaning “painted walls” in the Yucatec Maya language, by Santa Fe’s resident Mayanist, Sylvanus G. Morley. At the time, Morley was director of both the Laboratory of Anthropology and the Museum of New Mexico. Healey actually discovered the ruins of Bonampak in May 1946, accompanied by Carl Frey and John G. Bourne. As Mary Ellen Miller writes in The Murals of Bonampak (1986), Frey was an American draft dodger who had married a Lacandón Maya woman. And Bourne, who is a long-time Santa Fe resident, was a 20-year-old student from Los Angeles whose grandfather was president of Singer Sewing Machine. Healey was making a film about the ancient Maya. When the local Maya, who still revered the ruins as a shrine, led the trio to the site, they did not show the visitors the building with the murals. When Healey returned in 1947, the Lacandón showed him the murals, and he became their “discoverer,” at least among white men. The murals of Bonampak consist of three rooms painted floor to ceiling with scenes from the life of the king of the city, ceremonial dances, a battle, and a scene with the battle captives presented and sacrificed. There is also a musical band, images of nobles from other cities, and several scenes of Bonampak’s royal family. The murals were painted in 790, just a few years before the city’s abandonment. They were preserved because the limestone roof leaked, coating the painted walls with a quarter inch of calcium carbonate.

The Xultún murals were painted 25 years later, on the other side of the ancient Maya world. In his great work, The Inscriptions of Petén (1938), Morley wrote that Xultún was discovered in 1915 by a chiclero named Aurelio Aguayo but not scientifically investigated until Morley and his team from the Carnegie Institution of Washington visited 26 January in 1920. Chicleros were the men who used to crisscross the tropical rain forest of northern Guatemala, bleeding rubber trees for natural latex, which a century ago was actually used for chewing gum. From the late 19-teens through the 1930s, Morley posted notices in the region’s towns and villages, promising bounties for any man who discovered Maya ruins with carved monuments in the jungle. Chicleros led him to many important discoveries. Morley named the site Xultún, a made-up word in the Yucatec Maya that means end stone, or last stone, because as of the early 1920s, Xultún had the Maya monument with the latest date—10.3.0.0.0 in their Long Count system (Aug. 15, 869). Xultún is located almost 30 kilometers northeast of the Maya city of Uaxactún, in Guatemala’s Department of Petén. The site may be the largest Maya city you never heard of, as it is now known to cover 12 square miles and was occupied for more than a thousand years, from the first century B.C. to the 10th century of our era. Although Morley photographed and drew some of the monuments and mapped one section of the site, Xultún remained largely unknown to science until 2008, when the Boston U. team began a survey. But local grave robbers and looters rediscovered the site, and beginning in the 1960s, they tunneled into many buildings at Xultún. Hundreds of Maya cities large and small have been looted over the past half-century. Looting in Guatemala, Mexico, and Peru is largely driven by two factors: poverty in the countries of origin on the one hand, and on the other, collectors in Latin America as well as in the U.S., Europe, and the Far East.

The Xultún murals were not the first that Saturno discovered. In 2001, he ducked into a looter’s tunnel at the site of San Bartolo, a short distance from Xultún, and discovered a room with spectacular painted walls. The San Bartolo murals were painted around the second century B.C., about a thousand years earlier than those at Xultún. They are the earliest painted exposition of ancient Maya cosmology discovered to date, depicting mythological scenes about one of the Maya creator deities, the Maize god, and relating his biography to that of the human king of San Bartolo. Maya kings and queens were thought to be like in kind to the Maize god. The San Bartolo murals show the Maize god being dressed by lovely ladies at a place called Flower Mountain. Other figures pierce their penises in a penitential rite, shedding holy blood. Still another scene shows four sacred trees, each representing a world direction (east, north, west, and south), each with a sacred bird and a sacrificial hearth.

The Xultún murals provided another first for Maya studies: the earliest known records of astronomical computations. Like other peoples of ancient Mexico and Central America, the Maya were great sky watchers. Over hundreds of generations, Maya astronomers figured out the cycles of the sun, moon, and visible planets. They even learned how to predict solar and lunar eclipses. As accurate as their observations were, their understanding of astronomy more closely resembles our astrology. Heavenly bodies were living beings, gods, and ancestors who could influence human lives. In particular, ancient Maya elites wished to link their actions to astronomical cycles, just as they anchored the events in their lives in the Long Count calendar. At Xultún, one wall shows row after row of numbers, written in bar and dot notation—dots for numbers 1 to 4, and bars for 5. Saturno and other scholars realized that 146 or 147 days separated the numbers in these columns from each other, which equals six lunar months. The figures were also even numbers of cycles of the planets Venus and Mercury, as well as cycles of the 260 and 365-day calendars. This kind of table was previously known only from the Dresden Codex, a manuscript painted at least 500 years later, and one of only four surviving Maya manuscripts. The Xultún numbers were contrived to link human actions to the great cosmic cycles. Who painted them? Saturno guesses that the man pictured on the wall who is named Younger Brother Obsidian may have been the sibling of the Xultún king, and the scribe who painted the walls. Remember, he holds a writing implement. As Michael Coe and Justin Kerr note in The Art of the Maya Scribe (1998), ancient Maya scribes were often either nobles themselves or were attached to princely households, where they painted books and ceramics and worked on composing texts for their lords. Astronomical and mathematical calculations like those at Xultún seem to have been an important part of their job description. Saturno’s work is helping us understand how ancient Maya kings and nobles used math, science, and the calendar to establish their presence and memory in the cosmos. ◀

▼ “From the Myth of Kings to the Math of Kings: Art, Science, and the Ancient Maya,” lecture by archaeologist William Saturno, presented by the School for Advanced Research

Take a look: Maya murals in your home

▼ The Yale University’s Bonampak Documentation Project, including full-color watercolor reproductions of the murals by archaeological illustrator Heather Hurst, can be seen at www.yale.edu/bonampak.

▼ To see zoomable photos of the Xultún murals, go to http://on.natgeo.com/KQHQWq.