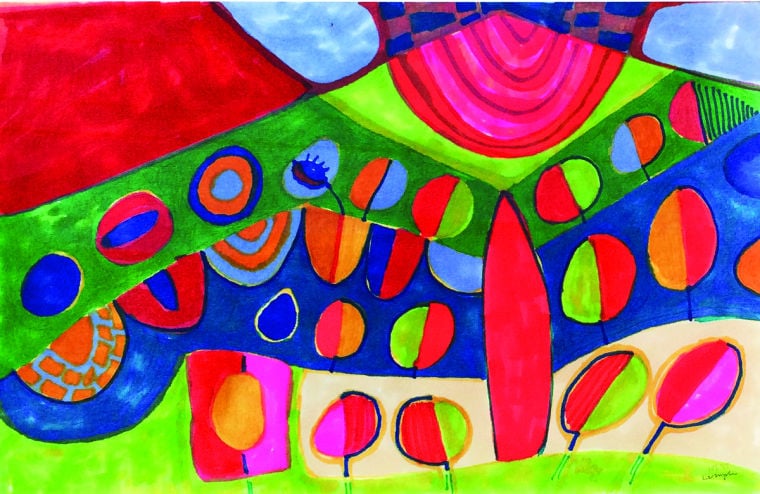 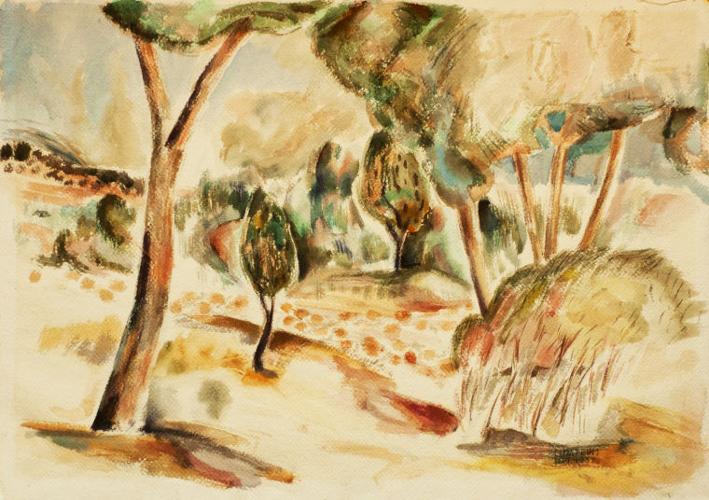 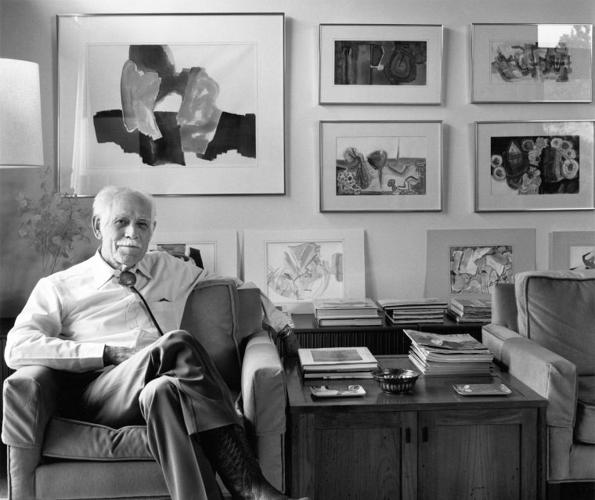 A 1937 abstract painting is among a trove of more than 150 works on paper by William Lumpkins that were recently released by his estate and are available at Matthews Gallery. None of the watercolors, serigraphs, and felt-tip-pen drawings by the late architect and artist have been seen before by the public.

The pieces have been kept by Lumpkins’ son, Will Lumpkins of Albuquerque. He had worked at the Virginia Museum of Fine Arts, “so my dad knew I knew about taking care of art prints. When he decided to simplify his studio storage, he picked out the pieces that he wanted me to archive at home.” Lumpkins, who died in 2000 at 90, didn’t want his son to put the prints on the market until Will was at least 70. The artist wanted to be sure his son’s artistic concept “was mature enough to where I didn’t have to mimic him.”

Not to worry. The son specializes in painting animals and employs Celtic-knot patterns. “I work entirely with transparent watercolors, and dad was very proud of that — that he and I were among the few who used it, because it’s difficult: after you do two washes, it gets muddy. You have to be sure of what you’re putting down, because you can’t erase it.” His father worked in acrylics later in his life, “when he was positive about his personal statement, which was kind of a Zen statement.”

William Lumpkins was born in 1909 on the Rabbit Ears Ranch in Capitan (15 miles north of Ruidoso), in Lincoln County. When he was a high-school student in Roswell, he was friends with the artist Peter Hurd. Lumpkins later described him as “the one person who helped me see with the eye of an artist.” The first time he visited Santa Fe was with Hurd, in 1927.

Two years later, Lumpkins attended the University of New Mexico. He studied painting under Neil Hogner and architect Irwin Parsons and became acquainted with Andrew Dasburg, Cady Wells, and other young artists. From them he learned about “the conceptual aspects underlined in nonrepresentational painting, viewing art as a vehicle of personal expression through line and color,” according to a Peyton Wright Gallery biography.

Lumpkins studied architecture at the University of Southern California in 1934, but he didn’t stay long enough to earn a degree. “I got tired of it,” he told Pasatiempo in 1998. He heard that the government’s Works Progress Administration was hiring in Santa Fe, so he returned to New Mexico. Artist Gustave Baumann, at the time an area coordinator of the WPA Public Works of Art Project, hired him after Lumpkins showed him a portfolio of watercolors. The young man went on to work as a junior architect for the WPA.

In 1935, he built what is considered the state’s first passive-solar home in Capitan, where Will was born. The father had noticed, growing up on the ranch, that a building was warmer in the winter when it had windows facing the south. That practical fact fueled his love for solar design.

Lumpkins returned to Santa Fe in 1938 and befriended Jozef Bakos, Willard Nash, B.J.O. Nordfeldt, and other modernist artists, but he was closest to Raymond Jonson, co-founder, with Emil Bisttram, of the Transcendental Painting Group. Besides Lumpkins, the group included Agnes Pelton, Florence Pierce, Ed Garman, and others.

After World War II, Lumpkins lived in La Jolla, California, where he did architectural design and painted. “I worked with him in architecture, and I learned watercolors from him,” Will Lumpkins said. “During the 1960s, for a lot of the work that’s in this show, he was in California and I was at the University of Southern California, so I was back and forth living with him. He was associated with the La Jolla Art Institute at that time. His mascot was toilet paper,” Will said with a laugh. “He would put that on the screen and then run the ink through it, which meant that there was only one print, because the TP would come apart. At the same time he started doing archival felt-tip paintings.”

Back in Santa Fe in 1967, the elder Lumpkins designed adobes and worked in historic preservation, includ-ing a restoration of the Santuario de Guadalupe. In 1971 he served on a city committee — with John Gaw Meem, Sylvia Loomis, Bainbridge Bunting, and Alan Vedder — evaluating design parameters for a new hotel, the Inn at Loretto, which was planned for the site of old Loretto Academy.

Wayne Nichols, who developed Second Street Studios with his wife, Susan, recalled in a 2012 interview that he and Lumpkins formed a partnership in the early 1970s with several other men. “At one time it was called Sun Mountain Design. Bill was the heavy in the group. Sun Mountain had designed more solar homes than any company in the United States at one point. There were eight homes on 40 acres south of Santa Fe called First Village and Second Village. It was written up in Life magazine and National Geographic.” It also was featured in the December 1976 issue of Popular Science. “The key to our design philosophy,” Sun Mountain’s Travis Price said in the article, “was the belief that every aspect of building a house could save or produce energy.”

In 1976, Lumpkins designed a transparent roof for the courtyard at La Fonda, in the process creating La Plazuela restaurant. Among his other architectural works are DeVargas Center, Rancho Encantado (torn down six years ago to make way for what is today known as Four Seasons Resort Rancho Encantado Santa Fe), the adobe home that is now the Eldorado Community Center clubhouse, a Bandelier National Monument exhibit that tells the story of the Pueblo Indians, and some 2,000 houses.

Lumpkins was presented with the Governor’s Award for Excellence and Achievement in Architecture and Painting, and he was named a Santa Fe Living Treasure. Lumpkins’ adobe architecture was featured in the 1982 exhibit Des Architecture de Terre at the Centre Pompidou in Paris. His books include Adobe Past and Present; Casa del Sol: Your Guide to Passive Solar House Designs; and La Casa Adobe, in which he advises, “Remember: Not even the wealthy can afford to build without the services of an architect.”

In 1985, Lumpkins and Pony Ault founded the Santa Fe Art Institute. Carrie Benson, SFAI director at the time of Lumpkins’ death, told The New Mexican that he “had the vision, and he was able to get really big names to come in, such as Richard Diebenkorn, Wayne Thiebaud, and Nathan Oliveira.”

The works in the Matthews show are, generally speaking, festive in color and form. The 1937 painting is more literal than his later paintings are. In that one, gallerist Lawrence Matthews said that you can see the influence of the modernist John Marin. Lumpkins was overwhelmed when he saw a Marin show in Taos in 1930. Matthews made the point that Lumpkins was virtually unique among the artists who made Santa Fe a mecca from the 1920s to the 1940s in being a native New Mexican, “and he brought that spirit naturally to his work.”

Previously known for his watercolors, Lumpkins first showed acrylic abstractions in 1996. The gamut of his artistic output and his discipline as a designer can both be seen as results of a lifelong adherence to Buddhism. “On the ranch where my dad was raised, they were so far away from the schools that his parents hired a tutor, and that man happened to have what I think was a Ph.D. in Oriental philosophy from Princeton. That was dad’s early education. That’s where he gained a sort of Zen attitude toward his work. That gave him the freedom to do the things that came through him, which is the way he used to say it, whether he was doing semi-realistic landscapes or purely abstract forms.” That freedom sometimes surfaced in his architecture as well. His obituary in the Los Angeles Times notes that Lumpkins “created homes that favored flowing room blocks and asymmetrical designs.”

In some of the paintings in the Matthews exhibition, his architectural background is evident — the works contain jumbles of plan views and elevations. But others demonstrate what is perhaps an escape from architecture. “Some of this work, particularly the mixed-media works and some of the felt-tip pieces, show a full-blown artistic imagination at play,” Matthews said.

Will Lumpkins said architecture is less apparent in these works than a “concentration on color and form. His architectural form, which is what I learned from him, was about spaces. I worked with him in a kind of partnership, and he dealt with spaces: not so much what it looked like but what the actual negative space was. That was very important. He emphasized that to me. The walls are just the enclosing of the space that you’re going to use.” ◀

The gamut of William Lumpkins' artistic output and his discipline as a designer can both be seen as results of a lifelong adherence to Buddhism.