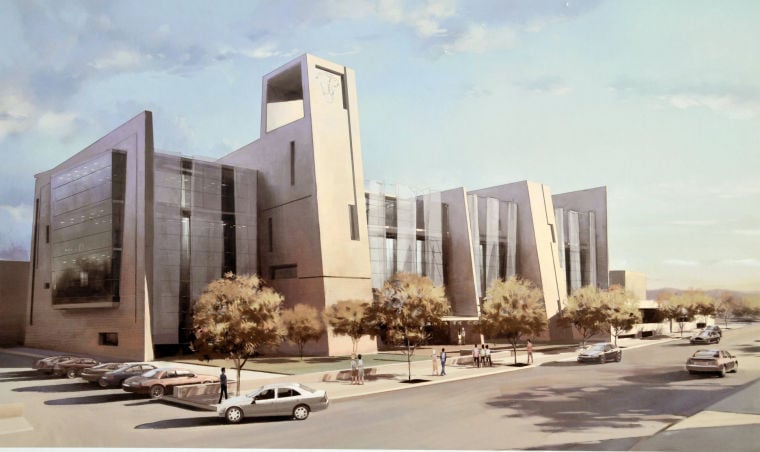 The proposed Santa Fe courthouse design by Conron & Woods/HDR Architecture would have been iconic as well as big.

Rendering of the chosen courthouse design. 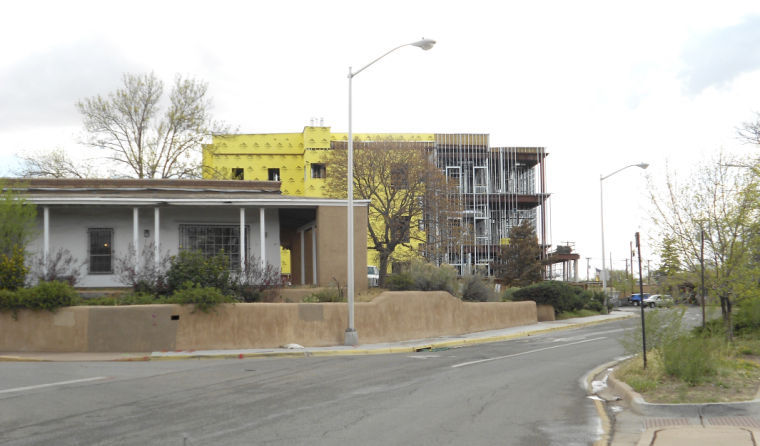 The courthouse under construction, looming behind one of the simpler buildings in the neighborhood.

The proposed Santa Fe courthouse design by Conron & Woods/HDR Architecture would have been iconic as well as big.

Rendering of the chosen courthouse design.

The courthouse under construction, looming behind one of the simpler buildings in the neighborhood.

Our tourists may be dismayed by the big new building going up at the corner of Montezuma Avenue and Sandoval Street. Many local residents certainly are. And the approval process for the Steve Herrera Judicial Complex-First Judicial District Court was contentious. How could it be otherwise when it involved a structure more than twice as high as what city code allows, dwarfing everything around it? The building is 52 feet tall and more than 100,000 square feet on three floors.

The Santa Fe County Commission voted in 2005 to build the new courthouse downtown. In early 2008, it approved the design by NCA Architects, Albuquerque, and Durrant Architects and Engineers, Dubuque. The other finalists in the design competition were Conron & Woods, Santa Fe, working with HDR Architecture, Omaha; and Studio Southwest Architects, Albuquerque and Santa Fe, with the giant Hellmuth, Obata & Kassabaum. (Among the applicants that didn't make the final list were Fentress Bradburn, the Denver firm that teamed up with Spears Architects on the new Santa Fe Community Convention Center; and Antoine Predock, Albuquerque.)

An early problem — besides an unexpected and prolonged cleanup of petroleum-contaminated soil under the site — stemmed from county leaders' contention that the courthouse project did not have to comply with the city's historic-district rules. The site is in the Downtown and Eastside Historic District.

The problem is that the site is surrounded mostly by one-story buildings, some of them venerable. The First Judicial District required at least eight courtrooms and two hearing rooms in a layout designed for the security of judges, defendants, and the public plus 150 parking spaces. You can't make something big smaller magically.

The architects reworked the plans more than twice. One real achievement was knocking down the height from 62 to 52 feet. "Yes, we were able to do that, " said Durrant architect Evan Sockalosky, lead designer on the project. "But due to the functions of the courthouse, you can't reduce more. We were already putting parking below grade to minimize that impact."

We will do the best we can with this, Santa Fe County seems to say on its website: "Understanding that the new courthouse will be a significant part of the historic downtown area, our design team is committed to respecting the traditional and unique design that sets Santa Fe apart nationally."

But how can you camouflage a giant? And it's a brand-new courthouse, so why shouldn't it look authoritative? Thus the tall, white-columned portico framing the glassy main entrance — thankfully not facing Sandoval Street. That facade has a long, low portal.

A Durrant statement about the project mentions the pedestrian scale of Santa Fe's downtown, and the courthouse's "colonnade along the edge of the street for people to walk beneath. The colonnade breaks down the scale of the courthouse, responds to the vocabulary of the city, as well as provides an additional level of security."

Another of the changes Durrant/NCA made based on input from the public, other local architects, and Historic Design Review Board members was going with a stone wainscot on the first-floor exterior. The original plan had a darker, more variegated-looking wainscot of brick.

"The design process for the courthouse was quite extensive, trying to work with the community," Sockalosky said. "The initial design was taller and had a more modern or contemporary twist on the adobe style, including some sharper angles. We also changed some window details and the type of columns.

"In the process we went from more of a contemporary adobe style to more of a neoclassical design, then to the Territorial Revival. Of course, one of the challenges with Territorial is that it's not usually to that scale."

Such a building is not appropriate in this neighborhood — the scale is all wrong and it's going to block sunshine and some mountain views from neighbors — but hopefully the built design will demonstrate some benefit from the discussions and the small degree of compromise that was possible given the needs.

The gaudy steel framing and yellow sheathing panels evident today will be transformed later this year to Santa Fe's beloved earth-tone stucco, with Territorial Revival-type brick coping around the roofline. Joseph Gutierrez, director of the Santa Fe County Community Services Department, said the $63 million courthouse should be completed in December.

An automobile dealership that was located in Santa Fe's central area in the mid-20th century is the model for the developers of the old Healy-Matthews/Club Luna property, one or two stone's throws south of the courthouse site. The Hancock-Old DeSoto Plymouth dealership possessed aspects of the "streamline moderne" architectural style, which will be evoked in the new multi-use Luna project at the southeast corner of West Manhattan Avenue and Cerrillos Road.

Owners Ken and Deena Joseph, consultant Don Wiviott, and an architectural co-venture between Gabriel Browne of Praxis Architects Inc., Santa Fe, and Thomas and Sara Easterson-Bond of WoodMetalConcrete, Santa Fe, are now engaged in the first phase: an adaptive reuse of the existing buildings. The developers are focusing first on the former Healy-Matthews building. "We have tenants, including Ohori's Coffee, that want to be in there as quick as possible, " Joseph said.

The other building, just to the south, was also part of the DeSoto dealership, but its back part was built for a theater. It has flared wing-walls, sort of like shark gills. "This is a classic acoustic treatment which keeps the sound from just reverberating back and forth between parallel opposing walls and also bounces the sound from the front of the theater toward the back, " Browne said.

The adaptive reuse will add a few windows, especially on that building, but no height. It will be about 8,000 square feet on each of the two levels, while the north building is 6,000 square feet, with a mezzanine to be added inside. The first phase will be entirely commercial, but live-work spaces are part of the flexible site plan, which also includes four new buildings and additional parking. The maximum height of all buildings will be 34 feet.

Ken Joseph said he recently applied to the National Park Service for a Route 66 preservation grant to help offset the cost of reusing the old buildings. The walls are pentile, concrete block, and brick, "a real Santa Fe mix, " as Tom Easterson-Bond put it. The walls and slabs have to be updated with plumbing and electrical systems and insulation, which can be a lot more trouble than demolition and building new. "But we're saving a lot of character, " Easterson-Bond said. A lot of people remember the Luna nightclub and Healy-Matthews and the car dealership. There's a lot of Santa Fe history in these buildings." One piece of that history is when the Josephs had one of their first dates at Club Luna, the occasion a concert by singer/guitarist Michael Hedges.

The development team had to do some asbestos abatement in the Club Luna building. On all the construction, they're minimizing waste and separating wood, concrete, and metal for recycling. That will get them LEED (the U.S. Green Building Council's Leadership in Energy & Environmental Design certification) points — Joseph said they're aiming for the highest LEED rating they can achieve.

Browne said the project includes super-insulating the building shells, with most of the new insulation on the existing buildings going on the inside walls and on the roof. Also planned are super-high-efficiency HVAC systems; solar-thermal panels to heat the building and for hot-water supply; and possibly a graywater-treatment system. Landscape architect Solange Serquis is on the project for landscaping, hardscaping, and a water feature designed to use stored rainwater.

"We want to deliver the first building in September and the second one, with any kind of luck, hopefully in November, " Joseph said. "The timing of the new buildings will be based on absorption. We'd like to just have one phase. We have 65 percent preleased on the first phase and we're getting phone calls every day.

"We're hoping to brand this as the Luna District. It's distinct from the Railyard and the Capitol area. This part of town hasn't forged its own identity yet."

Luna, 505 Cerrillos Road, is in the city's Historic Transition District.  ◀