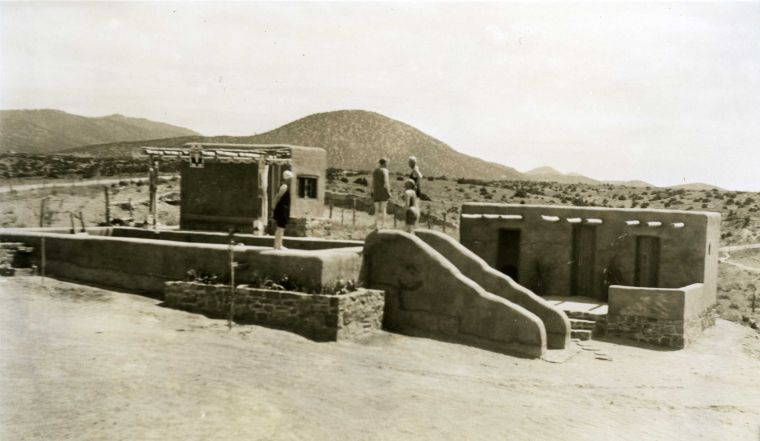 White sisters' swimming pool, circa 1924, William Penhallow Henderson (designer of the pool and a frequent user of it) may be the man standing on the stairs; Martha White is the woman on the left; School for Advanced Research archive no. AC18:418:15e 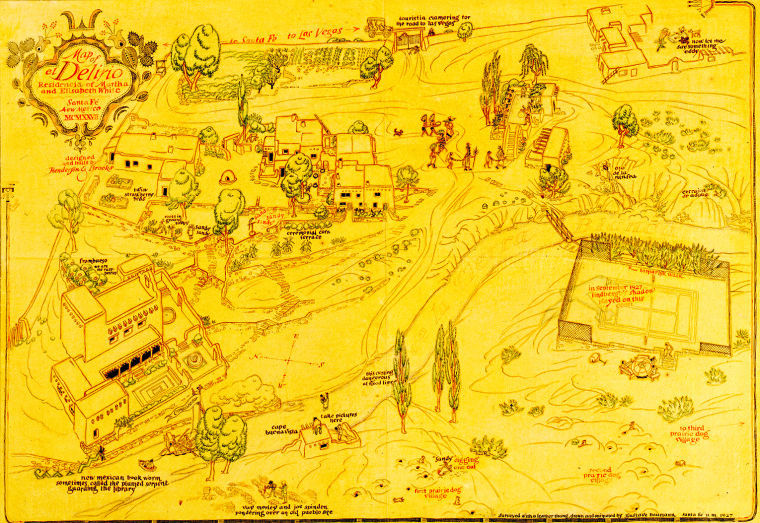 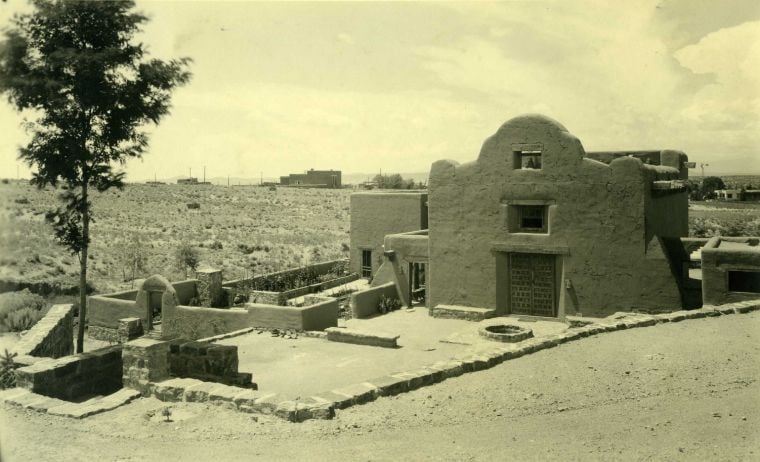 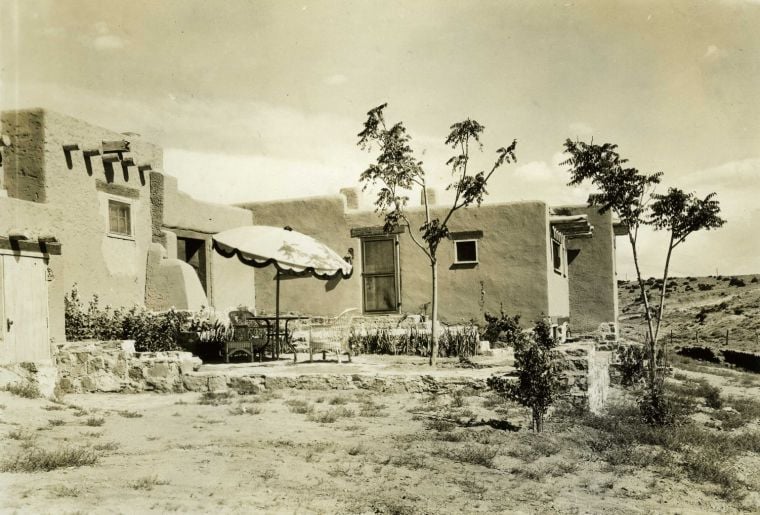 Patio outside of the White sisters' guest quarters, circa 1924; photo by T. Harmon Parkhurst; School for Advanced Research archive no. AC18:418:23a 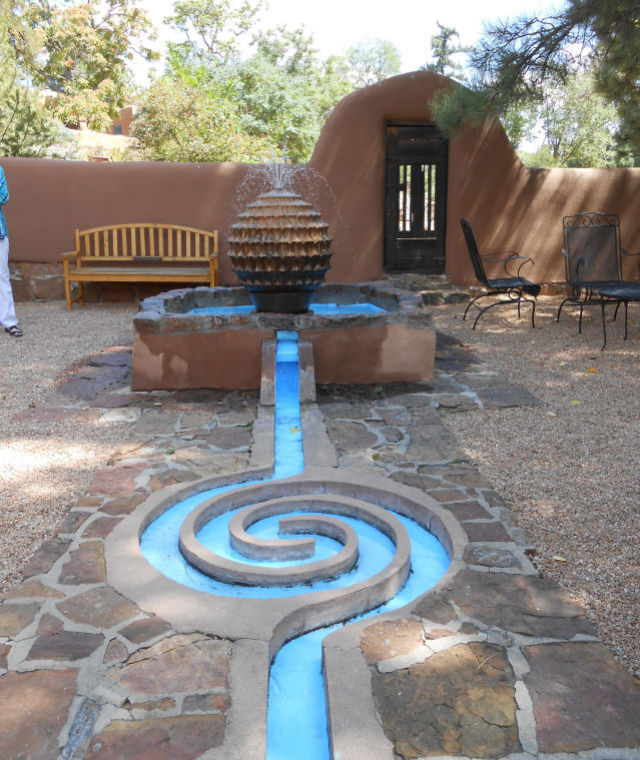 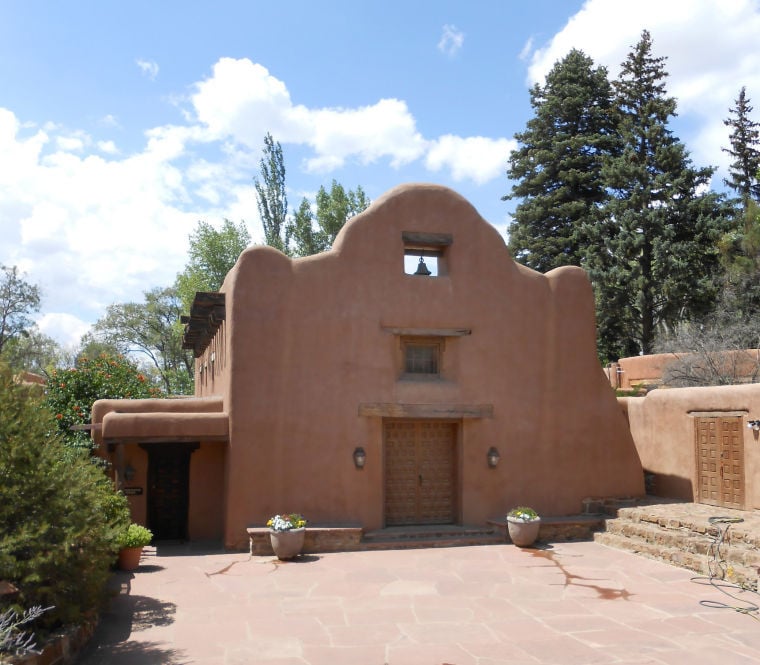 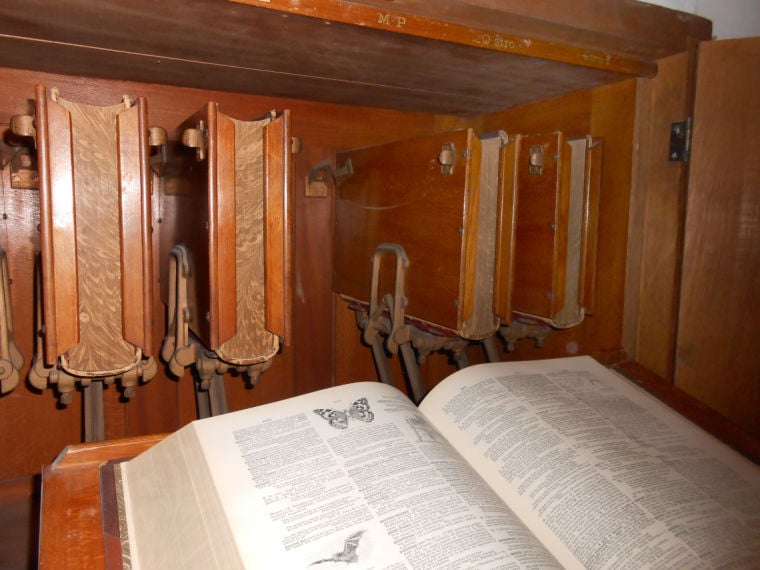 White sisters' swimming pool, circa 1924, William Penhallow Henderson (designer of the pool and a frequent user of it) may be the man standing on the stairs; Martha White is the woman on the left; School for Advanced Research archive no. AC18:418:15e

Patio outside of the White sisters' guest quarters, circa 1924; photo by T. Harmon Parkhurst; School for Advanced Research archive no. AC18:418:23a

A lovely sort of madness: School for American Research campus

Many interesting lines of inquiry can arise when you're walking around and looking closely at historic buildings. One that came up during a recent visit to the main building at the School for Advanced Research had to do with vertical bars of steel reinforcing rod (rebar) in the high windows. John Eddy, a woodworker and documentary filmmaker focusing on cultural and architectural preservation in Santa Fe, and I wondered whether they were an original part of the 1927 building. Then we wondered if rebar was even available in 1927.

A few minutes later, we met Ray Sweeney, SAR's physical plant supervisor — which means he takes care of everything on the property, as he and his father before him have done for decades. Sweeney had the answers to both questions. Looking up at those grand windows, fashioned in the thick adobe wall with splayed sills to bring in the most light possible, he said the rebar was added in the early 1970s, for security. "But they did have rebar in the 1920s; we saw it when we took out the swimming pool." That took the conversation to one of the newest buildings on the SAR campus: the reception center, built in 1999 on the site of the former swimming pool. That pool, 10 feet deep, was constructed in 1926 and is reputed to have been Santa Fe's first.

My field trip, taken on two days in August, focused on a few of the oldest buildings at SAR, all designed and built by William Penhallow Henderson. He was a painter who moved to Santa Fe after teaching for 12 years in Chicago and marrying poet Alice Corbin. The Massachusetts-born Henderson had mastered the basics of drawing by the time he was a young teen, as evidenced by an 1891 sketchbook. His favorite subjects included lighthouses, barns, silos, and houses.

After marrying, Henderson designed and built the couple's house at Lake Bluff, Illinois, in 1913, and, 12 years later, their house at 555 Camino del Monte Sol in Santa Fe. That year, he and his son-in-law, John Evans (the only son of Mabel Dodge Luhan), and Edwin Brooks started the Pueblo-Spanish Building Company to build houses and make furniture; Henderson specialized in hand-adzed ponderosa-pine furniture.

Among his architectural achievements are the late-1920s remodel of Sena Plaza, which included adding the second floor, and the mid-1930s design of the Wheelwright Museum of the American Indian. And the compound of buildings with a handsome, stone-terraced garden that he created for sisters Martha Root White and Amelia Elizabeth White on Garcia Street is certainly a standout.

The main building — the Whites' house, which has been SAR's administration building since 1973, Elizabeth White having deeded the sisters' estate to the school — has "a tremendous amount of Henderson energy in it, " as Eddy put it. He well knows the man's architectural signatures, since he worked as site supervisor on a restoration of 555 Camino del Monte Sol a few years back.

As soon as you arrive in the admin building's enclosed-portal entry, you notice Henderson's detailing in the rustic, adzed posts, corbels, and beams. The adze work, unlike that in some modern "Santa Fe style" houses, is very subtle. "It's remarkable, and it takes an immense amount of dedication, " Eddy said. "It's a very strong decision that somebody makes to put that kind of effort into an architectural finish.

"That's one of the wonderful things about this complex: his eye, his attention to detail, is everywhere. I think of Henderson as being one of the purer architects of Santa Fe style, because of the way he balanced the Pueblo and Arts and Crafts elements. But it's not like Henderson did all of this work. I feel real strongly that it was Spanish American craftsmen, including in the Gabaldon family, and possibly also Native American craftsmen, who did a lot of this work."

Henderson's model for this building was the old mission church at Laguna Pueblo. The references are fairly obvious in the facade and in the main room, complete with an attractive "choir loft" feature at one end. An alacena (recessed wall cabinet) up there holds a series of amazing spring-loaded display mechanisms for a six-volume 1890 dictionary. The big support posts for the loft have stone footings; this feature, and the concrete-tile floor, are also seen at 555 Camino del Sol, Eddy observed.

The viga ceiling — with fat latillas set herringbone-style and arranged in alternating sets of four or five that are painted red, white, and black — is interesting, but if you want to be dazzled with ornamentation, visit the office that used to be the dining room. The floor tile and metal railings are unique, as is the rather gaudy coffered ceiling. The standout, though, is a fireplace set in an old altar screen.

"Sylvanus Morley brought that from an earthquake-damaged church in Guatemala, " said SAR staffer Jean Schaumberg. She pointed out that the altar screen's side panels bear images of lute-playing angels painted by Gustave Baumann. The White sisters apparently didn't like the crucifixion scenes that were on the panels before. The sisters, both wealthy New Yorkers, came to this property, which they referred to as El Delirio (The Madness), in 1923. It was then just an acre and a half. By 1972, when SAR moved in, the estate had grown to 8 acres. By the end of September, SAR president James Brooks hopes to close on an additional 7.44 acres to the southwest, which will accommodate future expansion.

The oldest structure on the parcel is a house that may date back to the 1800s. Today it's the core of Bandelier House, one in a cluster of apartments used by the school's resident scholars. But in the early 20th century, when this was still an agricultural area, it was the home of Benito Garcia and his family. In 1910, he worked as a cook in a local hotel, and his wife, Juana, was at home with their five children, according to a 2011 study of the property by architectural historian Catherine Colby.

Elizabeth White first hired Henderson in 1923 to install fencing and expand the old Garcia adobe. He soon added a pair of guest houses, today's Hewett and Kidder buildings. Colby mentions that these were architecturally compatible with other, nearby adobe buildings, except that whereas those were single-story, the new houses were built on a slope, resulting in two-story facades on the west.

Working with Brooks, Henderson conceived the characteristic stone-walled terraces west of the casita cluster. Then, in 1927, they finished the main house. Some of that work was filmed by the White sisters. It shows how the big logs were hauled up to the roof for service as vigas: workers pulled on ropes attached to the ends of each log, dragging it along planks leaning against the top of the wall.

In the 1920s the Pueblo-Spanish Building Company put up a house for estate manager Jack Lambert (now the Douglas W. Schwartz Seminar House) and built a mirador, an open structure that offered to the relaxing resident or visitor an excellent view of the compound. That was remodeled, probably in the 1940s, into the Billiards House -- only this building and the administration building were thought to warrant inclusion in the city's Downtown and Eastside Historic District by Stephen S. Post, who wrote an Archaeological and Historical Study of the School for Advanced Research Campus last year. The historical value of the other buildings, including Bandelier House (once the only edifice on the site) has been compromised by extensive alterations over the years.

Post also notes the historical significance of the corral and pens at 679 Garcia St., which have stood at the site for at least 75 years. Lambert built them for the White sisters' horses and mules. Jack and Marjorie Lambert lived adjacent to the stables beginning in the 1950s. The stables were converted to homes in 1976.

During the 1930s, the last one of the group of guest houses (now scholar residences) just north of the main entrance was built. Known today as Wagner House, it included the New York Room, which Elizabeth White designed and furnished to recall the sisters' home in New York.

Also in the 1930s, at the south end of the estate, the Whites built the Rathmullan Kennels to raise and breed Irish wolfhounds, later adding the Kandahar Kennels to do the same with Afghan hounds. An excellent and lengthy article about the wolfhound program at El Delirio appeared in the May 1934 issue of American Kennel Gazette. In 1962, architect John Gaw Meem was brought in to remodel the kennels to serve as an archaeology lab and darkroom. The space was adjusted again in the late 1990s to serve as the headquarters of SAR Press, which had been housed elsewhere on the campus.

In the 1970s and 1980s, the campus continued its architectural evolution under plans by John T. Midyette, including for the Indian Arts Research Center, and by Mark Jones and Cynthia Urban, whose design for the Douglas W. Schwartz Seminar House additions were built by the Sweeney clan. Brooks promised that any new buildings in SAR's future will be designed with William Penhallow Henderson in mind.  ◀