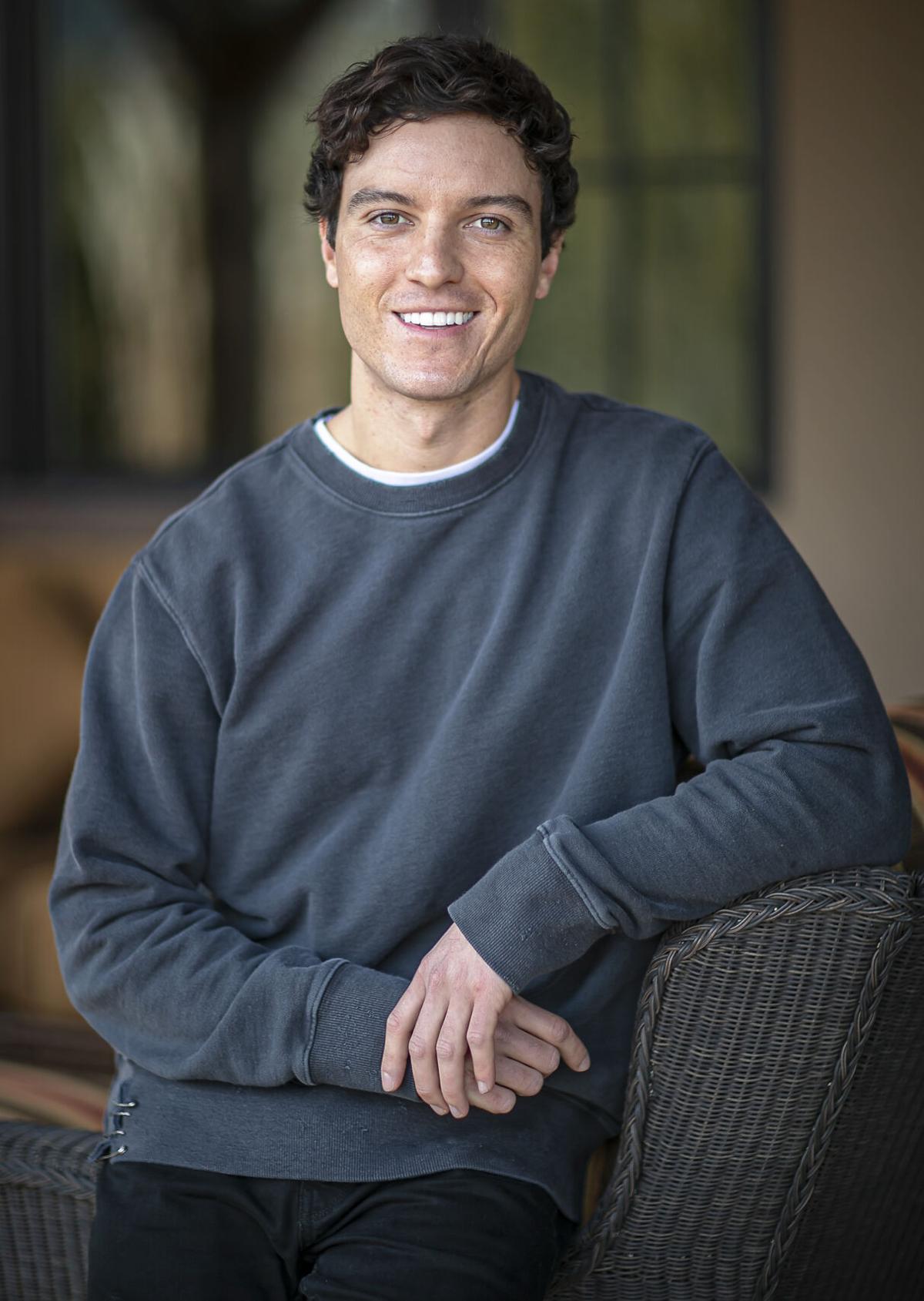 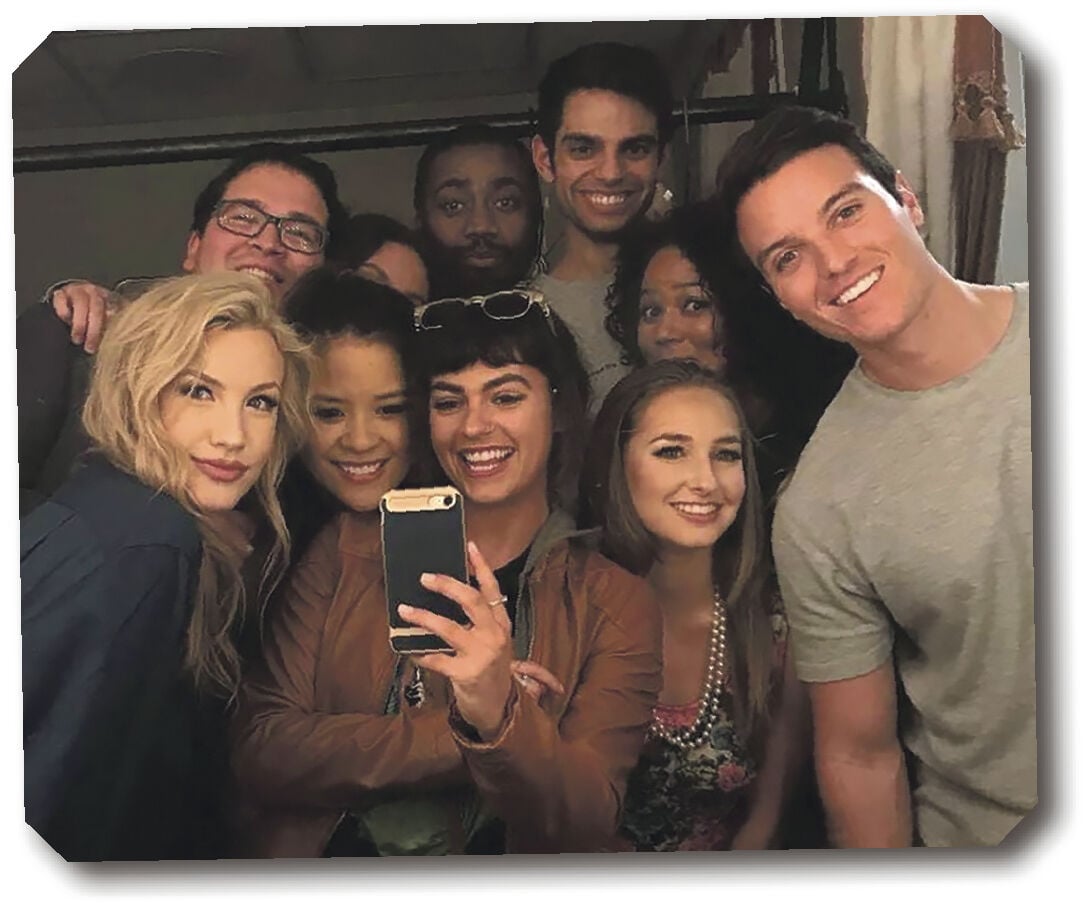 Herrera at the Horton Grande Theater in San Diego

for his showcase of Good Will Hunting 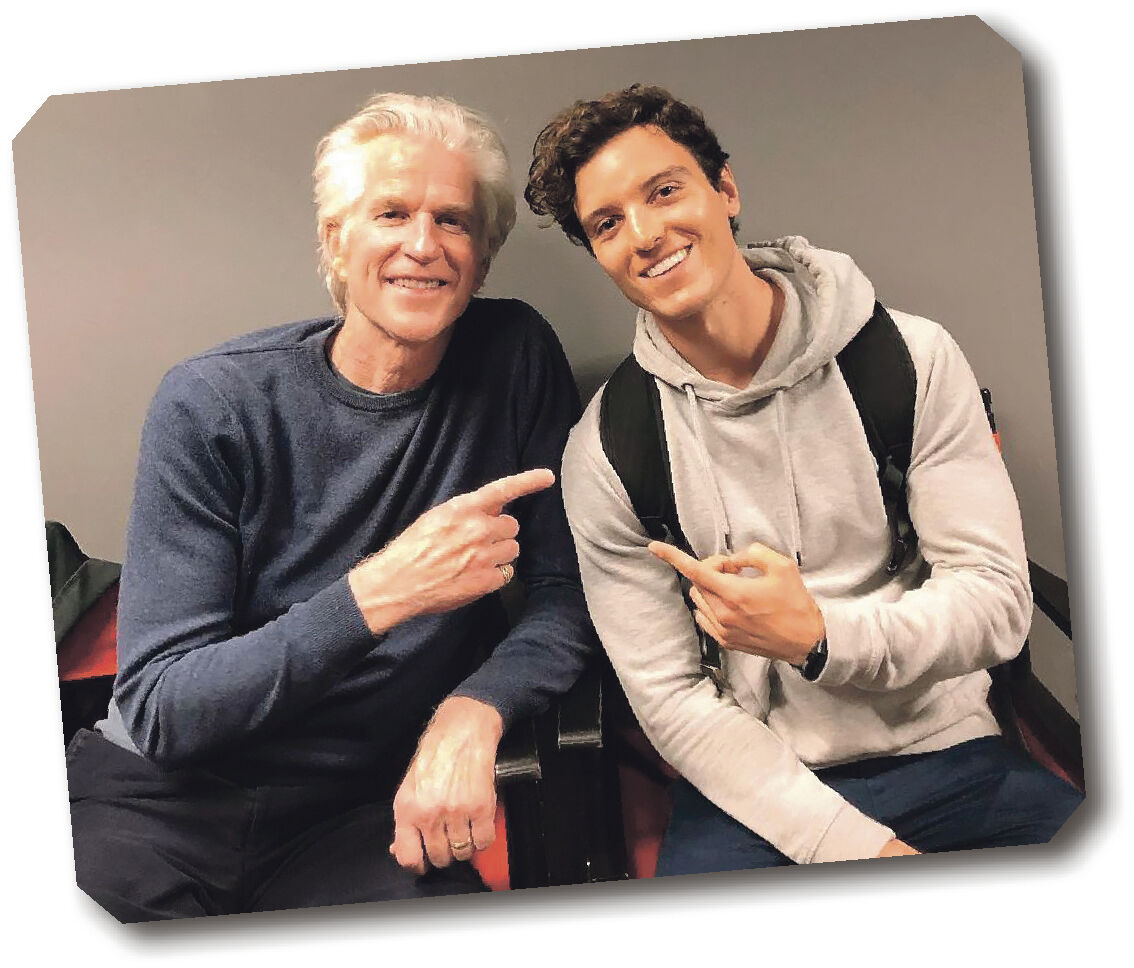 With actor Matthew Modine (left), from Herrera’s Instagram:  “…thanks @matthewmodine for spending the day teaching your craft and love for playing different lives”

In his college days, studying urban planning and design at the University of New Mexico, Steven Herrera Jr. thought that maybe he’d pursue a career as an architect. In a way, he was following in the footsteps of his father, local contractor Steven Herrera. But fate had other plans for the young student, who nurtured a lifelong dream of being in the movies.

“I just didn’t see too much creativity in urban planning and design for me, but I learned so much,” says the Los Angeles-based actor. “In college, I got scouted by a modeling and commercial agency. They asked if I wanted to read for a Campbell’s Soup commercial, just to see how I did. I thought, ‘Oh, this is amazing. I get to act.’”

Sitting on a comfortable sofa in the guest house on his father’s property in Tesuque, Herrera looks very much the movie star. You’d almost think you were in a spacious Beverly Hills pied-à-terre with breathtaking views, an amber glow from sconces, and pillows of a classic Pendleton design strewn about the couch. Or at a movie star ranch, overlooking the nearby corral. He stays in the house whenever he’s in town visiting family, as he did during this interview just before Christmas.

“I went and read for the commercial and was completely turned off by it,” says the 30-year-old actor. “It was so boring.”

That was the sum of Herrera’s acting experience in college. (He graduated in 2014.) But a break would come. Today, he’s a principal actor in Good News, a drama in post-production starring Machine Gun Kelly and has a lead role in Him, a horror film in pre-production. But there was a time when being in the movies was just a fantasy for the New Mexico-born actor who was raised off of Highway 14, not far from Madrid. Compared to Los Angeles, the area was, he says, “the middle of nowhere.”

“After college, I moved to San Diego and was just hustling, working all kinds of side jobs: sales, marketing, valet, everything,” Herrera says. “I decided to hop into some acting classes, get some coaching, and learn the fundamentals that I never took the time to learn when I was younger.”

“I was trying to be as weird and funny as I could. But I definitely wanted to be in the movies. I just had it in the back of my mind that it was impossible to do. I also wanted to be a professional basketball player.”

When he started pursuing acting and moved to Los Angeles, Herrera says his family and friends weren’t positive or negative, just neutral. They had faith that he could make it work.

“My family members would always [say] I could get lost in the Sahara with … one sock and just the shirt on my back, and I’d find my way out. So the response was like, ‘OK. Even if we don’t fully believe it’s going to happen, you’ll figure something out.’ They don’t understand the audition process and agent process and all of that kind of stuff. But they’re just so interested in how it all works. And even if I’m in the smallest of roles, like 10 seconds of screen time, they’re just amazed by it.”

Growing up on 10 acres of land where there are no sidewalks and his nearest neighborhood friend lived miles away, Herrera found ways to occupy his time. He rode his dirt bike, skateboarded, snowboarded, and made art.

Under the moniker “Kong,” he gained a small reputation as a street artist. He credits the performative aspect of being a street artist with feeding his acting ambitions.

“In the street art world, you go under a different name, so you’re like a character,” he says. “I really liked that, and that’s why I reference it with the acting. Street art for me was kind of like an alter ego or alter identity. It’s kind of a different life from the social norm, and it’s frowned upon in society. But it was a way for me to express my creativity. I’d go to bed at night and dream about different ideas for a wall or for a canvas. The next day, I would just go practice and get better at manipulating paint.”

But something beckoned to him, and Herrera would grab his dirt bike, ride to the top of a hill, and look down on the movies being filmed at Bonanza Creek Movie Ranch, which was close to his family’s property.

“If I ever win any type of award, I hope I remember that all the people around me also have a dream and treat them right.” — Actor Steven Herrera

“Sometimes they’d have explosions and all kinds of stuff going on. I’d just sit there and watch it all. I thought, ‘Maybe I want to be a stuntman,’ because I grew up doing action sports. But I reenacted like every movie scene in my room. A lot of comedies, action films. I wanted to be Spider-Man ever since the first movie came out.”

But at St. Michael’s High School in Santa Fe, where Herrera was a student, acting wasn’t something he pursued.

“I closed myself off from it then, and I regret it now,” he says. “I just felt like, ‘There’s no way I could become an actor where I’m from.’ I saw it as such a far-fetched dream.”

Herrera looks younger than he is, which is why he’s often cast in roles where he plays teenage characters, including a recent, uncredited stint as a teen fairgoer in Licorice Pizza.

In his acting classes in San Diego, his passion for the craft blossomed.

“I fell in love with how much you can really learn and how much goes into taking those words from a piece of paper, turning them into life, making it believable to the viewer. My goal was to start off with theater and see where that went.”

Things unfolded a bit differently, however.

In one of his classes, the students created a film showcase that was presented for an audience of writers, producers, agents, and other industry professionals. After the show, an agent reached out to Herrera and signed him, convincing the budding actor to move to LA, where he’s been living for the past three years.

“I just hit the ground running,” says Herrera, who’s just landed a role in the first episode of a forthcoming Reese Witherspoon-produced series for Amazon called Daisy Jones & The Six.

“I feel like I’ve been on 5,000 auditions at this point. My goal isn’t to be famous,” he says. “I just want to be a working actor and be proud of what I’m putting out there. The mindset that’s helped me out is, you have to want it but not need it. If you’re trying to book the gig, it’s going to be better for you mentally if you want it more than you need it. But you have to want it because it’s your passion.”

Despite his share of rejections, Herrera never thought about giving up. And every once in a while, there’d be an angel there to give him a boost.

In 2020, he was working for a catering company that landed a contract to cater for the Academy Awards ceremony. Herrera showed up, not knowing what to expect nor what his duties would be for the evening.

“You got lucky tonight,” his captain told him. “You’re in charge of the trophy room.”

That meant that Herrera would be pouring and handing out champagne to the Oscar winners when they walked off stage.

“It’s this private, private room,” he says. “It was basically just me with the champagne while they were waiting to get their trophies engraved. I was geeking out the whole time.”

Renée Zellweger had just won her second Oscar, the Best Actress award for her role as Judy Garland in the 2019 biopic Judy, when she walked into the room.

“She was so sweet because she just took the time to talk to me, even in the moment where she was winning an Oscar. I’ll remember it forever.”

Zellweger asked him if he was an actor. He said yes, and she replied, “Keep knocking on that door and eventually that door will open. You’re going to do it. Keep at it.”

“I was just in awe that she even took the time to say that to me,” he says. “If I ever win any type of award, I hope I remember that all the people around me also have a dream and treat them right.”