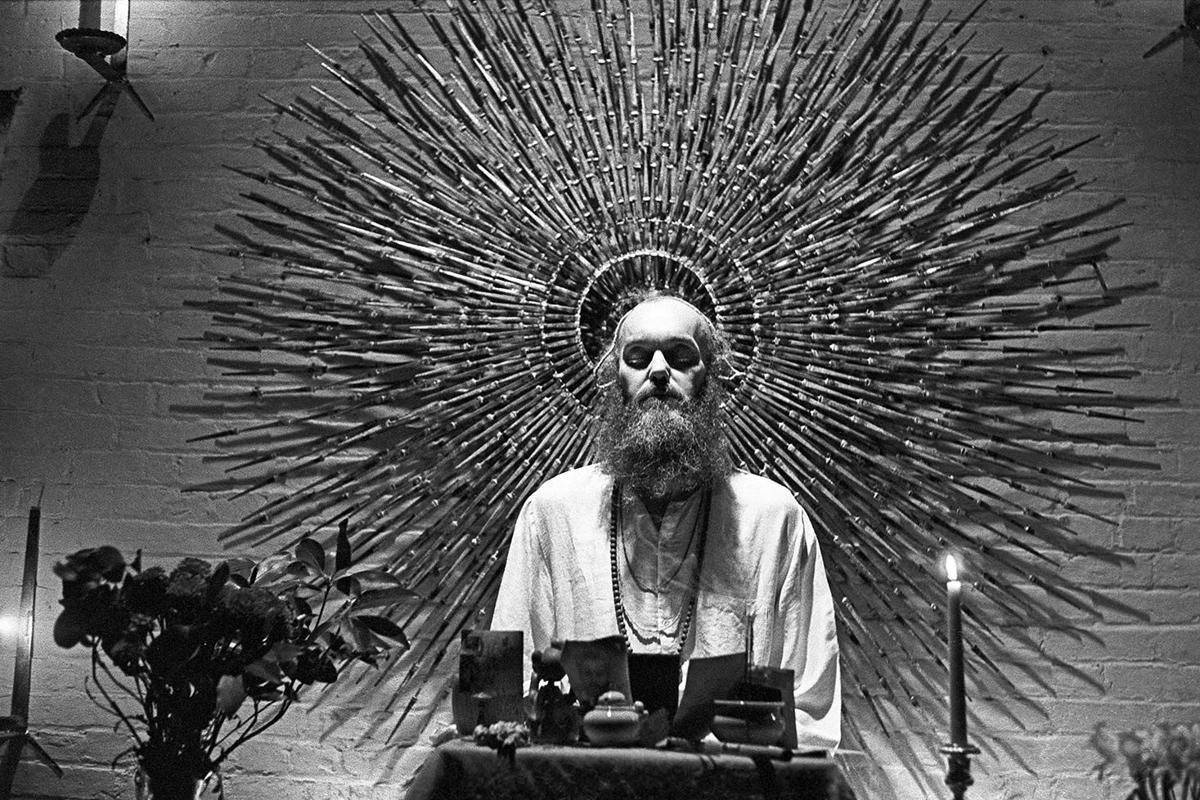 Ram Dass in front of a sunburst sculpture, 1969 © Rameshwar Das 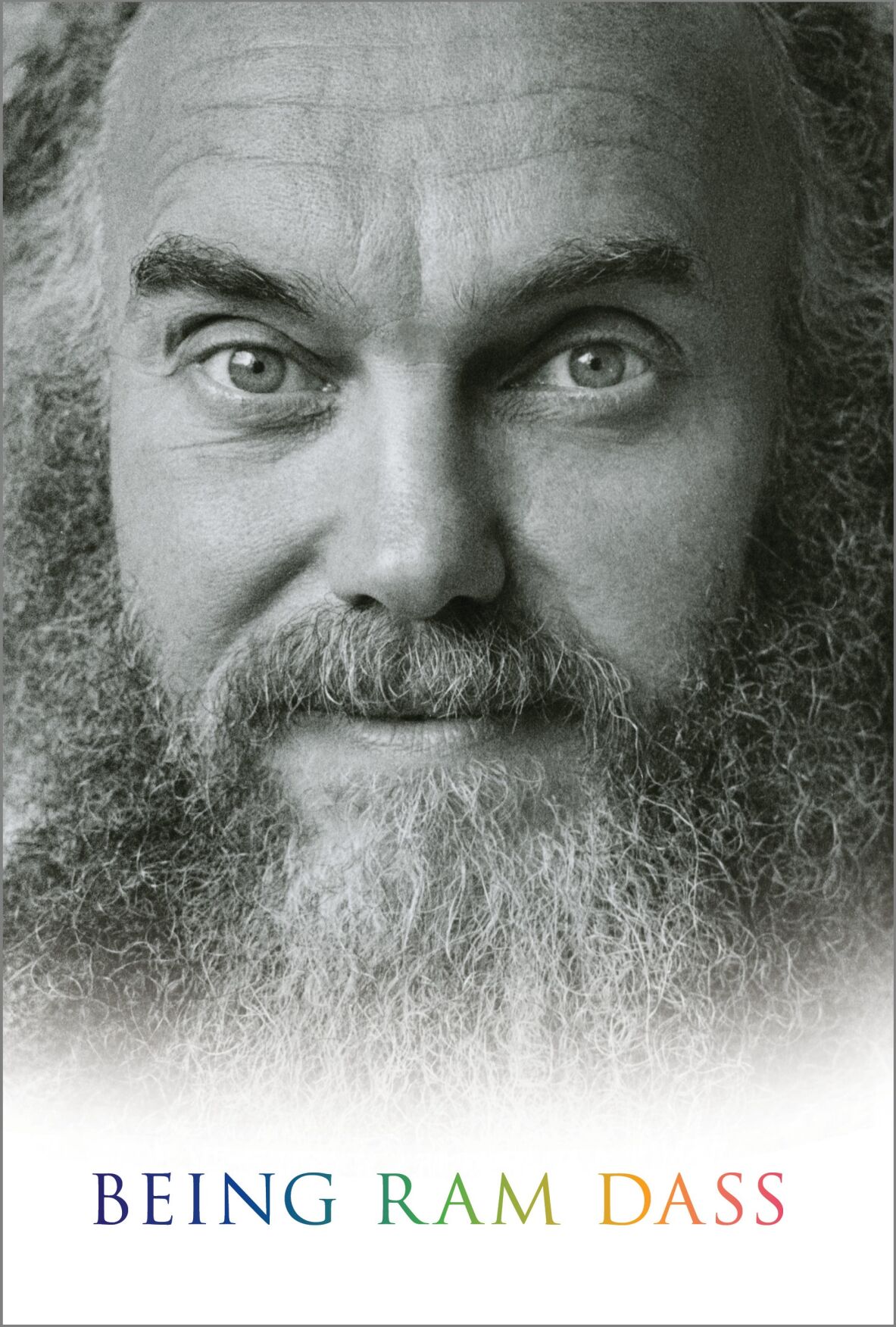 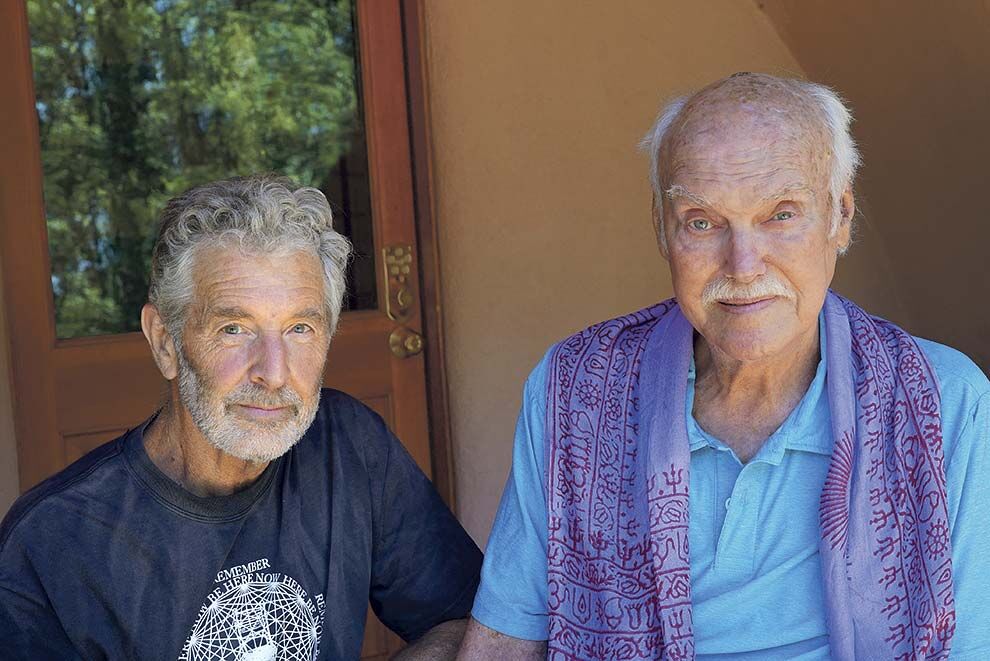 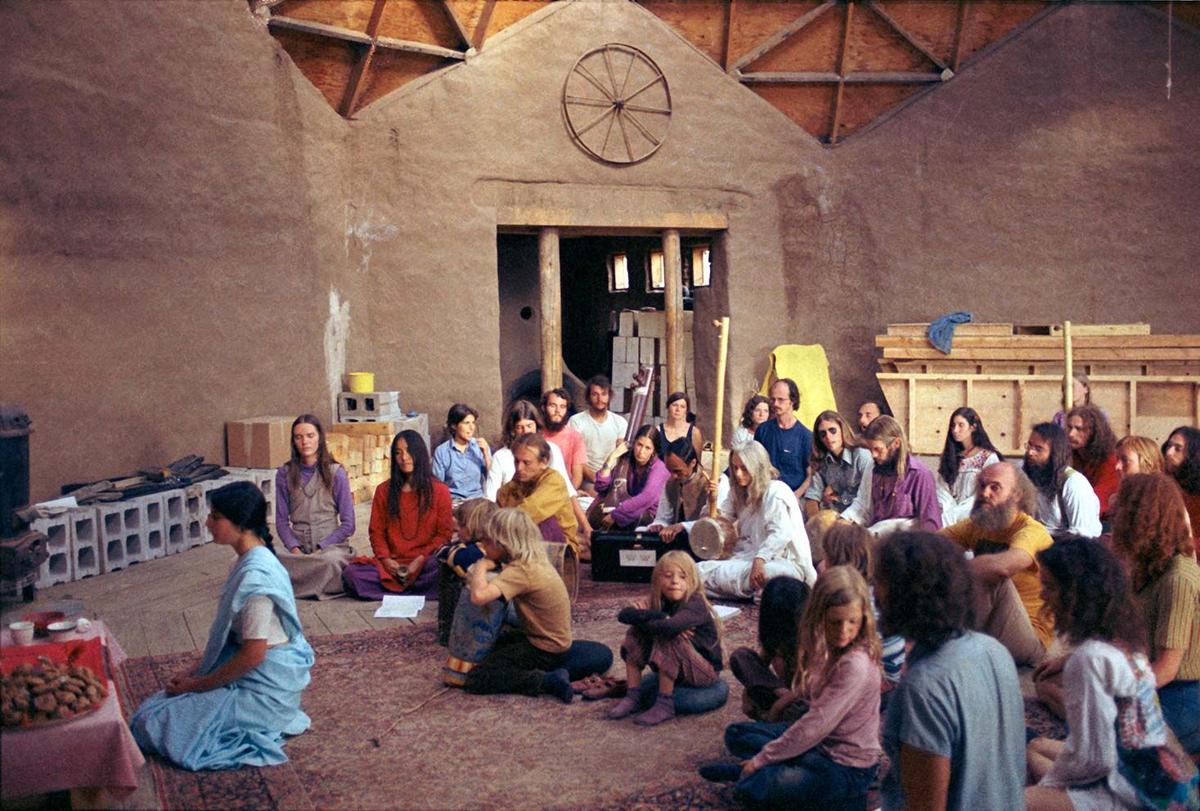 Ram Dass in front of a sunburst sculpture, 1969 © Rameshwar Das

Ram Dass became a household name in New Age circles when he published Be Here Now in 1971, a book about Eastern spirituality, meditation, and yoga. He traveled to India in 1967, as his previous incarnation, Richard Alpert. There, he met his Hindu guru, Neem Karoli Baba, known to his followers as Maharaj-ji. The guru gave Alpert his new name — which means “servant of God” in Hindi — and Ram Dass spent the rest of his life imparting wisdom and spiritual love to followers of his teachings. Among them was James Lytton, who would later be called Rameshwar Das.

“I saw him speak when I was an undergrad at Wesleyan University, in Connecticut. Something happened inside me, this really remarkable feeling of coming into my own heart,” he says. “I started to visit him in New Hampshire at his family’s farm. He taught me the yoga and meditation that he’d learned in India. That was 1968, and now, here we are.”

Rameshwar Das became a close creative collaborator of Ram Dass, who died in 2019 at age 88. They worked together on Being Ram Dass, a memoir that was published posthumously in January. It took 10 years to complete, due in part to Ram Dass’ aphasia (slowed speech), a consequence of a near-fatal stroke in 1997. Before that, he’d traveled and taught, without a real home base. He held seminars at Lama Foundation, near Taos, at least once a year. (Lama residents edited and published Be Here Now.) After his stroke, he lived in Hawaii. He was no longer an itinerant mystic, but he was still as devoted as ever to his and others’ spiritual paths.

Being Ram Dass (Sounds True, 409 pages, $29.99) is a comprehensive accounting of his life that goes into depth about his privileged youth, his drug experiments, and his sexuality, Rameshwar Das says.

Rameshwar Das: A “guru” is someone who helps you along. Ram Dass had this analogy that I love. A teacher is someone standing on the road next to you, pointing up the road, saying, “It’s that way.” A guru is at the destination, beckoning. A guru is a person who reflects your deepest soul to you.

Pasa: Although it’s a memoir, Being Ram Dass lacks a memoir’s typical confessional quality. Nor does it float in heady, New Age lingo. Is its directness of tone purposeful? I was expecting something much less graspable.

RD: Even though he had this aphasia, he really knew what he wanted to say. He was looking at himself from the soul perspective, this really deep, inner place that watches the incarnation go by. That was a way of detaching. Then you can see things as they come up and kind of accept them and love them. I think that was the process of releasing stuff for him. … Some of Ram Dass’ teaching over the years was sort of esoteric, but he always used his life experiences as the ground for his teaching. Before the stroke, anyway, he was a really great storyteller. I think some of that comes across in the book. Trying to bring the spiritual into the Earthbound is really what he was about.

Pasa: Ram Dass was first known for the Harvard Psilocybin Project, which he worked on with Timothy Leary in the early 1960s. They were trying to find ways to access new levels of consciousness. As Alpert, Ram Dass was already seeking proof of the soul’s existence. How did meeting Maharaj-ji transform Ram Dass in ways that psychedelics couldn’t?

RD: It really became much more a matter of experiencing and giving love. Ram Dass is seen mostly as a spiritual teacher and storyteller, but he did a lot of social service. He started the Prison-Ashram Project; he co-founded the Seva Foundation [a global nonprofit eye care organization]; and he [helped to start] The Dying Project, a house in Santa Fe for people who had terminal illnesses, where they could work on themselves and have the support of people who were doing spiritual practice. It didn’t work. People didn’t die. They got better.

Pasa: When Ram Dass published Be Here Now, in 1971, Baby Boomers were in their 20s, and many were seeking new religious and spiritual traditions. How did Ram Dass feel about being the face of hip mysticism for Americans in the 1970s?

RD: I don’t think he stopped to think about that very much. He was an explorer of those edges of consciousness and spiritual development. At the same time, he was working on himself. That ability as a teacher and storyteller really brought a lot of other people along. He understood that the name and fame part of it was pretty irrelevant. … I think he was aware when people were watering [spiritual practice] down, or commercializing it, or doing it for their own aggrandizement. Maharaj-ji told him not to make ashrams, not to set up a whole scene. He never really tried to make it into a moneymaking scene. He always gave away the money he made lecturing and writing books, either to foundations or to other projects.

Pasa: In the book, Ram Dass talks about having sexual relationships with men from the time he was in college. Was his sexuality a secret when he was alive?

RD: In his later life, he decided that he was primarily homosexual, but he’d been bisexual through a lot of his life. He ended up living with the same man for 19 years, toward the end of his life, a pretty stable relationship that extended all through the period of his stroke and afterward. He had some important relationships with women over time as well. It was important to portray all that. It could be seen by some as salacious, but I think he was really trying to understand it [through the writing process]. In the period when he grew up, especially in academia, coming out as homosexual would have ended his career. He had to be pretty closeted in that time. When he was around 80, he found out he had a son, from a relationship when he was at Stanford in the late ’50s. So that was an interesting flip on things.

Pasa: Why is Ram Dass’ perspective still relevant? As we endure a lethal pandemic, as well as political strife and civil unrest, what kind of wisdom can he offer us?

RD: Well, “be here now” is a good start. Just be where you are and bring that sense of being present with your own life, which is not always easy. You don’t have to go anywhere to look into yourself. It is that quality of going within, to understand whatever it is that’s happening around you or to you. … Toward the end of his life, when he would lead meditation, he would give people this thought mantra, like a prayer: “I am loving awareness. I am loving awareness. I am loving awareness.” You use that to go into your own being and come down from your head to your heart. It makes life easier, I think. ◀

The interviewer misspelled the name of Ram Dass' guru. The man was known as Neem Karoli Baba. He was named after the nearby village of Neem Karoli where he was tossed off the train by a suspicious conductor. Holy men could ride for free on the trains and this guru was very young of age and the conductor thought he was a fraud. The Baba sat on the ground for many hours, sitting silently while the train was paralyzed. It wouldn't move. They kept heaping more coal into the furnace and even called for another engine to push from behind but the train remained frozen in place. Finally the conductor begged the Baba to please get back on the train. He accused the staff of being unfriendly to holy men, and also, being there was no train station for the village people of Neem Karoli, he made the train staff promise they would build a station for these deprived people. The Baba then stepped back onto the train and it finally moved forward. This incident was spoken of far and wide and the man was known forever after as Neem Karoli Baba.