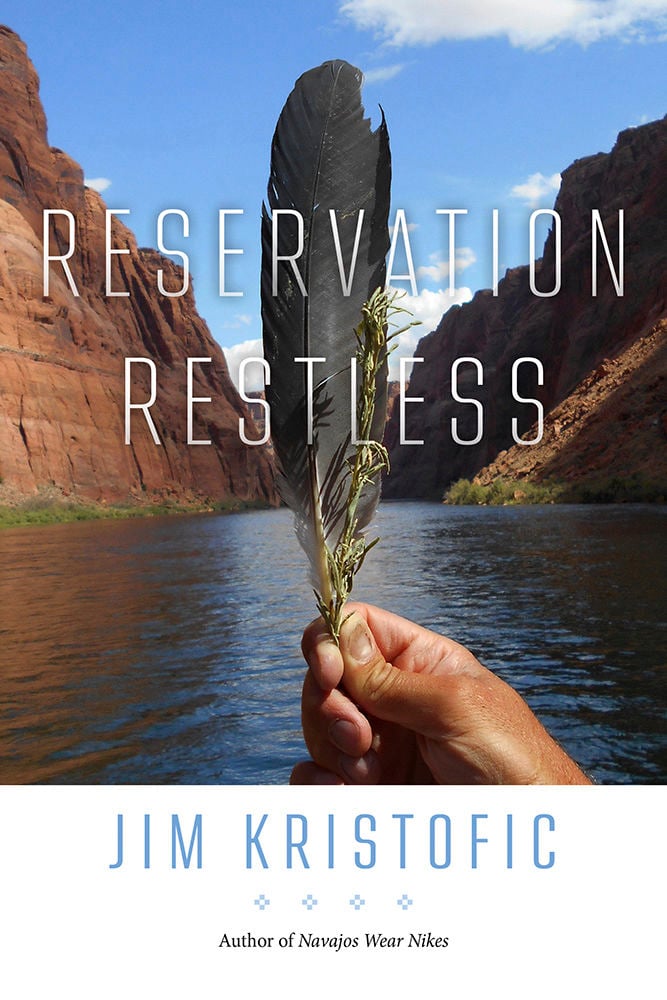 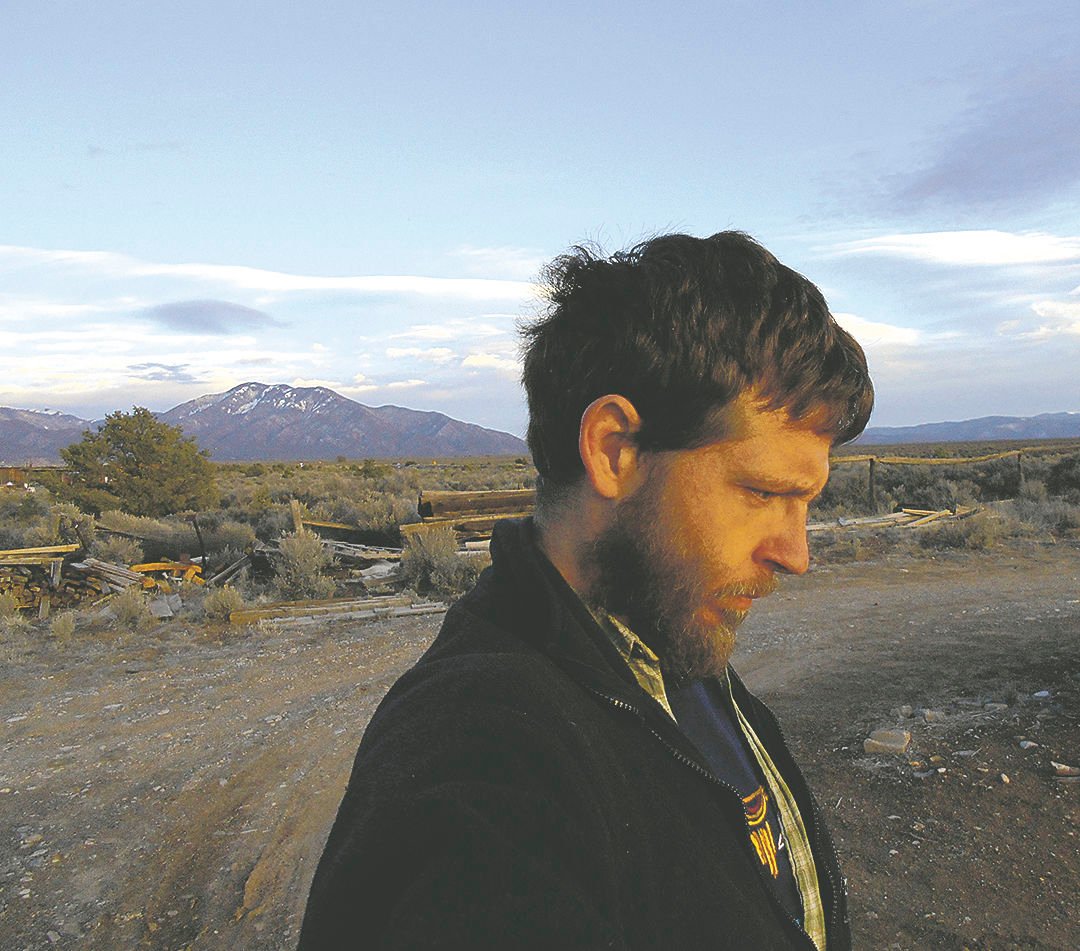 Jim Kristofic’s second memoir, Reservation Restless, is about coming home. That’s a succinct description of a book that isn’t succinct, by an author who prefers extensive context to bullet points. When Kristofic explains something, he wants to explain it completely.

“My previous book, Navajos Wear Nikes, is about why we decide to call a certain place our home,” Kristofic says. “Reservation Restless is an answer to a question. Reservation Restless is a story of a person having to deal with the forces that make us leave our home and travel through strange experience and then return to that home forever changed and understanding it in deeper ways than they did before.”

Kristofic’s on a patchy cell phone connection from his family’s backyard in Church Wells, Utah. (He currently lives in Taos and teaches English at Taos High School, a job he’s performing remotely while schools are temporarily closed.) He grew up in Ganado, Arizona, on the Navajo Reservation, from age 6 until 1996. Then he went away to college in Pennsylvania, originally intending to become a lawyer. As he relates in Reservation Restless, he moved to New Mexico in 2014, after admitting to himself that he hated living and working as a teacher on the East Coast — and, more generally, in mainstream Anglo society.

“It wasn’t until I was age 22 that I could finally start getting along with white people,” he says. “I still have trouble with it. It’s ironic because I’m Irish and Slavic. But I don’t feel a connection to Anglo people.”

Kristofic, 38, wrote Reservation Restless for his neighbors in Ganado. The episodic narrative is rife with long hikes, daring adventures, and meaningful encounters with wildlife and rainbows. His target audience will recognize the places and ideas that he references and appreciate the stories he tells. He interweaves these stories with his personal experiences of spirituality and grief, an emotional state that he says makes more sense to him when he can use Navajo metaphors to deal with it.

“I believe those deities are real. I do my dawn prayer in the morning and leave offerings at holy sites,” he says.

By writing Reservation Restless, he knows there are some Navajo and non-Navajo people who will say that he shouldn’t write such a book because he is white. It’s a perspective he shrugs off. “People told me these stories. If I’d been told by my relatives, ‘You don’t say that, don’t share that story,’ then I wouldn’t. But I had them all read the book before I published it. And they’re critical. They’ve known me since I was a little booger eater. They’re not trying to spare my feelings.”

Edison Eskeets is the trader at Hubbell Trading Post in Ganado, the oldest trading post on the Navajo Reservation. Kristofic worked with him at the trading post in the summer of 2012, and two have remained friends. Asked whether he thinks that Kristofic’s books are respectful of the Navajo people, Eskeets says yes.

“I think there’s great respect for what he says on behalf of the folks. The stories are wonderful because they’re in print, and they can be utilized. His books are entertaining and they are a resource for what to expect on the Navajo folks. Sometimes there’s information about traditional things, and like I said, it’s a resource. It’s going to be great for the younger generation, maybe 40 years down the road. At least one of his books will be a classic.”

Kristofic moved to the Navajo Reservation in the late 1980s, when his mother got a nursing job at Sage Memorial Hospital. “There, I was a bilagáana (white boy) who had to adapt or die,” he writes. “I chose to adapt, and it became a beautiful life for me in that small valley the Diné people who live there called Lók’aahnteel (The Place of Wild Reeds). … While I was there, I gained a Diné stepfather named Nolan Manygoats and a sister, Yanabah, and a brother, Glen.”

“He has an extraordinary story to tell,” says Paul Zolbrod, the author of Diné Bahane’: The Navajo Creation Story (1984). He also taught English and humanities at Diné College in Crownpoint, New Mexico, from the mid-1990s until 2005. In 2019, he was asked by UNM Press to review the manuscript for Medicine Women, and he was immediately impressed with Kristofic’s knowledge of Navajo culture and his skill as a writer. “He’s a kind of living, present-day Huckleberry Finn, metaphorically speaking, floating down the Mississippi River, in search of adventure.”

In Reservation Restless, also published by UNM Press, Kristofic populates his prose with Navajo words and phrases. (He says that he’s not conversationally fluent in Navajo but that he can understand it and write it with few errors.) His nonlinear plotting can make it a challenge to follow the action as he hikes through canyons and spends time with friends and family. A particularly important figure is Kristofic’s mentor, Lyle, who’d been his high school English teacher. As Kristofic discusses culture and history, he talks only generally about Navajo deities and takes care not to reveal private ceremonial information. He writes vividly, his fervor for his subject matter often bordering on ecstatic.

“Leo, Glen, and I are on the mountain, and we cannot help thinking like the mountain,” he writes about a hiking trip he takes with his half-brother and a friend in the chapter “Yellow Evening Twilight.” The chapter is about loved ones who have cancer — a state of being that Kristofic refers to many times as “the wilderness of Cancer.” In this chapter, it’s not always clear where in time we are, or even if Kristofic is with both hiking companions at once. The merging of time, place, and experience recurs throughout the memoir. Poetic refrain lines appear in some chapters. In “Yellow Evening Twilight,” Kristofic returns time and again to variations of the phrase “We are walking and we are talking.”

As they walk, he turns to Glen and tells him that this mountain is his inheritance.

“This is the land of your people. Diné Bikéyah. You are tied to this place. You have rainbows at your elbows and your arms and your center. You have a feather at the whorl at the top of your head. That’s where the Holy People, the Great Ones, blew your spirit, your life. You are at the border of that place right now.” After that speech, Glen tells him that he’s weird.

Kristofic is aware that he can come across as weird — even rigid. In Reservation Restless, he’s often judgmental about mainstream society’s shallow materialism, which contrasts sharply with his own ideals, as well as his penchant for philosophical and spiritual flights of wonder. The memoir shines a light on his personal eccentricities as much as it does his connection to Navajo culture. He says that he and his stepfather, Nolan Manygoats, are the members of their family that tend to think and voice big ideas. Often, he says, he’s just riffing about things that are in his mind, and it doesn’t matter if it makes perfect sense.

In a footnote toward the end of the memoir, he explores his aversion to popular culture by looking up the current number one hit on the Billboard chart — at the time “Uptown Funk” by Mark Ronson, featuring Bruno Mars. He dissects the lyrics about “ice cold girls” who “look like Michelle Pfeiffer” and what the singers think their bodies should look like.

“The song praises living for Saturday nights in a big city, drinking alcohol and handling money at the same time, and then letting the spirit of ‘uptown funk you up,’ ” he muses, disapprovingly, on the page. “But let’s get this straight: the music in the song makes me want to dance until I sweat.”

The passage in the book came from what he calls a genuine moment of reflection. Standing in his parents’ backyard, which is in a town so small that it was removed from Google maps, he says, “Around that time, I was approaching the age of Jesus Christ. Thirty-three — how weird. I was thinking that it will be a once-in-a-lifetime year, where I am as old as Jesus Christ, and then I’ll outlive him. My family raised me Presbyterian, which is good because I learned the Christian way. I’ve read the Bible four times cover to cover. I don’t use the metaphors of Christianity to guide my life, but I know what they are.” ◀