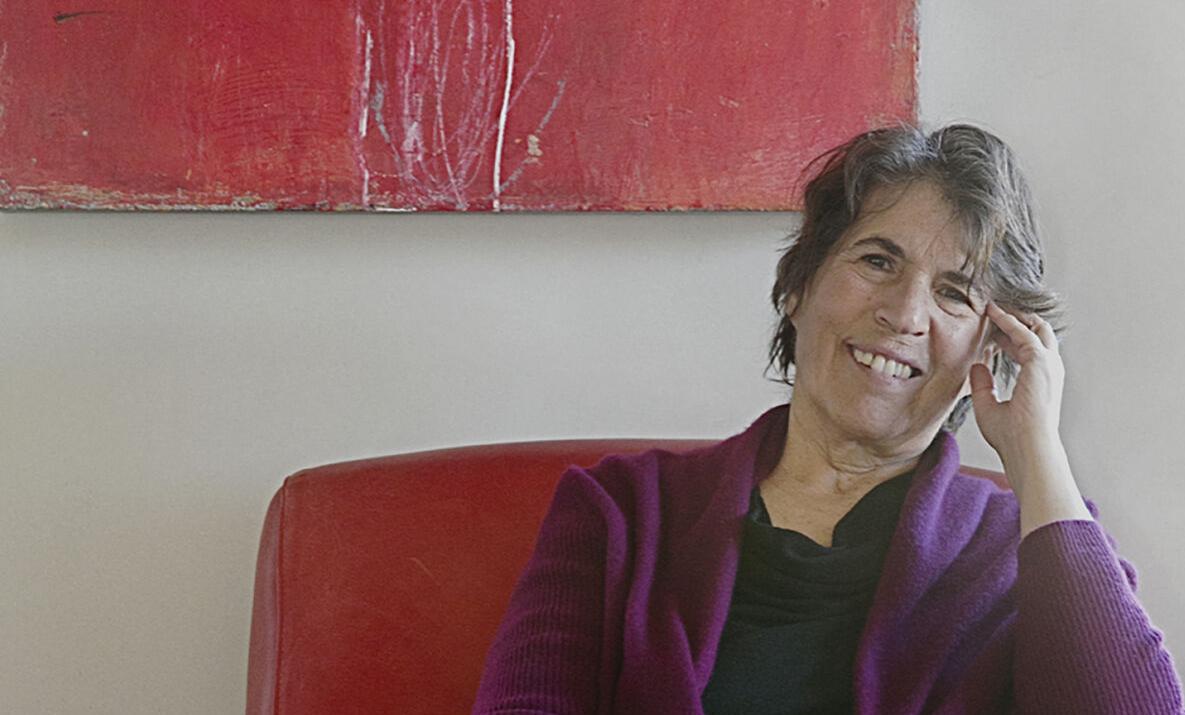 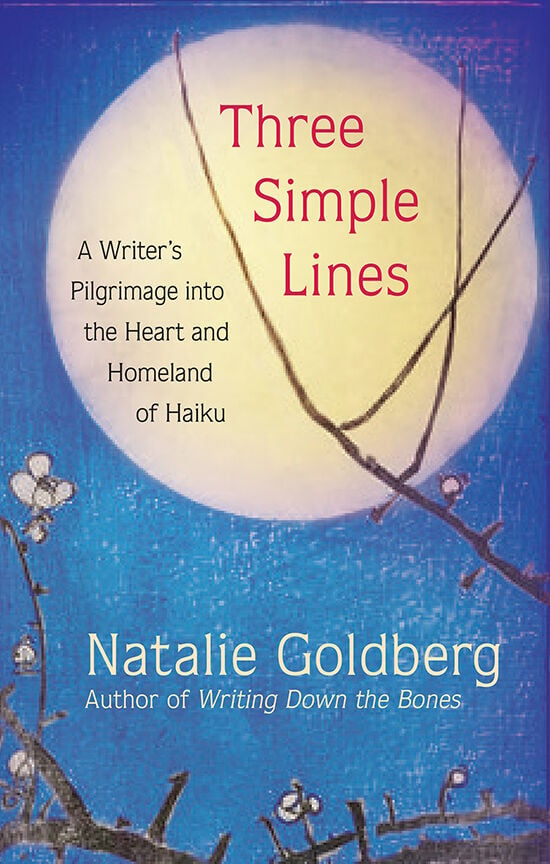 Natalie Goldberg has practiced Zen Buddhism for more than 30 years. Every day, the born-and-bred New Yorker tries to clear her busy mind through meditation. It almost never works.

“When you sit, you realize the nature of mind goes all over the place. What happens is that you get a relationship with your mind. And then you learn, over time, how to just become present,” she says.

Goldberg moved to Taos in the early 1970s and started teaching writing workshops. She developed a cult-like following for her best-selling Writing Down the Bones: Freeing the Writer Within (1986), which has informed the way creative writing is taught all over the world. In her 15th book, Three Simple Lines: A Writer’s Pilgrimage into the Heart and Homeland of Haiku (New World Library, 2021, $22.95, 176 pages), she explores the history and beauty of the deceptively simple, three-line poetic form. She visits Japan and delves into the lives of haiku masters, while — back home, in Santa Fe — she attempts to write her own.

“My haiku was not very good,” she says, cackling. “I kind of delighted in it.”

Like most of her books, Three Simple Lines incorporates memoir, Zen practice, and writing instruction. “People have also called it a travel book. It’s been listed under literary criticism,” she says. “I weave different parts together. I don’t like separations that I think are, often, artificial.”

For Goldberg, 73, writing is a practice unto itself, like meditation. The goal isn’t fame, or enlightenment, but the pursuit of truth and clarity for its own sake. She likes to say that writing every day isn’t so different from brushing her teeth every morning. You get up; you do it. And when she battled cancer from 2012 to 2014, she continued to do both, every day. Three Simple Lines is the beginning and the end of that story.

Writing is a better friend than cancer

Upon her return from a trip to Japan, Goldberg began writing a book about haiku, a form she first learned about in 1976, from the Beat poet Allen Ginsberg. She was about 25 pages into the manuscript when she was diagnosed with chronic lymphocytic leukemia, blood cancer.

She put the haiku book aside and turned her attention to another memoir. She describes The Great Spring: Writing, Zen, and This Zigzag Life (2016) as a book of essays about “things I wanted to record, in case I didn’t make it out, that people would know about me.”

Goldberg demurs about the details of her initial cancer treatment but says the transfusions she received didn’t incapacitate her. However, her busy life was suddenly very quiet, when she wasn’t fielding doctors’ appointments, and she had all the time in the world to sit with her thoughts, her pen, and her paper. Writing was far preferable to googling medical terminology.

“When you’re doing cancer, it’s an obsession. It’s all you think about,” she says. “But I had this other world that I could enter. It was a delight. It was my friend.”

When she was sure that she was going to live, she wrote Let The Whole Thundering World Come Home (2018), which was about Goldberg and her partner going through cancer treatment at the same time. (Her partner, Yu-kwan, had breast cancer.) Both women are fine now, although Goldberg’s illness is chronic. She takes a pill every night to block the protein the cancer needs to survive.

“It’s a very modern thing,” she says. “It just came out when I got cancer.”

Talking with Goldberg about her illness, and about the two books she wrote during treatment, you understand that she doesn’t want to dwell. Her tone tells you that, despite the need for ongoing medication, she’s living firmly in the as-well-as-can-be-expected present.

“I almost didn’t want to go back to what I was writing before. I prayed that it wasn’t any good, and I could forget about it. But it had energy. I had to complete it. Three Simple Lines is my secret third in the trilogy of cancer, because, in a way, I’m saying I made it through cancer. I started something, and I get to complete it. I’m not being arrogant,” she adds. “I know something will get me eventually.”

Zen is being annoyed and impatient

Although Goldberg’s disposition is generally sunny, she still has a Brooklyn girl’s salty soul. Her voice is often laced with sarcasm, and she’s perpetually ready to erupt into laughter. Her big personality can stand in contrast to the minimalism and social propriety of Japan, where she travels in Three Simple Lines. With a translator and a tour group, she visits Zen temples and historical sites, and sometimes has the opportunity for solo adventures. Throughout, she renders herself as easily annoyed by unfamiliar rules and expectations, as well as by her own impatience.

“She is not above playing the self-centered American in Japan, demanding service in restaurants after the kitchen closes and refusing to attend a lecture at Naoshima, the art island, since she simply wants to experience things without preconceived notions,” Leanne Ogasawara writes in Asian Review of Books. “But maybe it is her cluelessness that makes her such a wonderful travel companion around Japan. Her friend and guide in Japan, Mitsue, tries to explain that in Japan people try to be considerate and not make themselves the center of things. Japanese people try to imagine what others want, even changing what they are saying mid-sentence to try and achieve harmony.”

Of these “self-centered American” instances, Goldberg says, “I wanted people to understand that we’re human, and it’s okay to be human. … I was just having fun [ordering dessert after the kitchen closed], and I knew it would blow Mitsue’s mind. And also, I’m very free when I don’t know the language. I don’t know what they’re saying about me, so I can just act out.

“Actually, me being annoyed and impatient? That’s Zen, too,” she says, referring back to her ever-wandering mind. “Wherever you are is accepting it. Maybe not demonstrating it all the time, and hurting other people, but allowing yourself to be yourself, and not to be anyone else.”

In prose that is often as spare and poetic as haiku, Goldberg sidesteps into the lives of Bash-o (1644-1694), who came of age with the invention of the form and was a student of Zen Buddhism; Fukuda Chiyo-ni (1703-1775), a Buddhist nun who began writing haiku at age 7, and paved the way for other female poets; and Kobayashi Issa (1763-1828), whose life was marked by tragedy, including the death of his first wife and three children. But it’s Masaoka Shiki (1867-1902) to whom she devotes the most attention. Shiki suffered from lifelong pain and illness, and died from tuberculosis when he was in his 30s. His writing often depicted his physical suffering. Goldberg discovered her innate connection to Shiki during her research for Three Simple Lines, after finding out that her potentially fatal cancer could be lived with as a chronic illness.

“Although ostensibly about haiku, the book is really about Natalie Goldberg. There are no academic explanations about the poetic form or its conventions or history, but there is plenty about the American experience of haiku — from Allen Ginsberg to the great Reginald Horace Blyth — and from American Zen — from Katagiri Roshi to the powerhouse teacher-translators Kazuaki Tanahashi and Joan Halifax,” Ogasawara writes in a review that is equal parts critical and lauding.

At home in Santa Fe, Goldberg joins a local haiku study group that meets monthly at the public library. Her description of her drive to the library during a March snowstorm echoes the observations of the natural world and of human nature that are often present in haiku. And reflects her forthright sense of humor.

“It’s … the first and only snow we’ve had since autumn. But now it’s spring and the apricot blossoms, always early, stunning in pale pink, will freeze. The roads are full of slow traffic. Santa Feans are fearful of both snow and rain, and even more of slush.”

It was a relief to be a beginner at something, to sit back and learn instead of teaching, she says. If anyone but the group’s leader knew who she was, they didn’t let on. The first haiku she showed to the group went like this:

On my brown socks

She writes that the poem “falls like a dead horse on dead ears.”

She next offers them:

“I like this group,” she writes. “I also want to scream. But I decide to continue with the practice, to see where it leads.” She’s been in the group for three years now, which continues to meet seasonally on Zoom.

To write haiku, Goldberg says, you have to read a lot of it. Then you’ll understand the compression of language, the importance of simple observation, and the value in waiting for the haiku to come to you. Good translations matter, as does allowing yourself to sit with the words — to understand them in layers, in due time.

“Haiku is a refuge when the world seems chaotic. When you are lost, frightened, tangled, and nothing is clear,” she writes in the first sentence of the book.

Reading haiku keeps Goldberg in the present. It takes her back to her breath. It stills her thoughts. “Even if the haiku is about suffering, it’s not my suffering, and it takes me out of myself,” she says. “Which is so wonderful, because a lot of our deep suffering is about ourselves.” ◀

Pasatiempo wants your haiku. Please send your submissions to jlevin@sfnewmexican.com by April 18. No more than three haiku per submission, please.