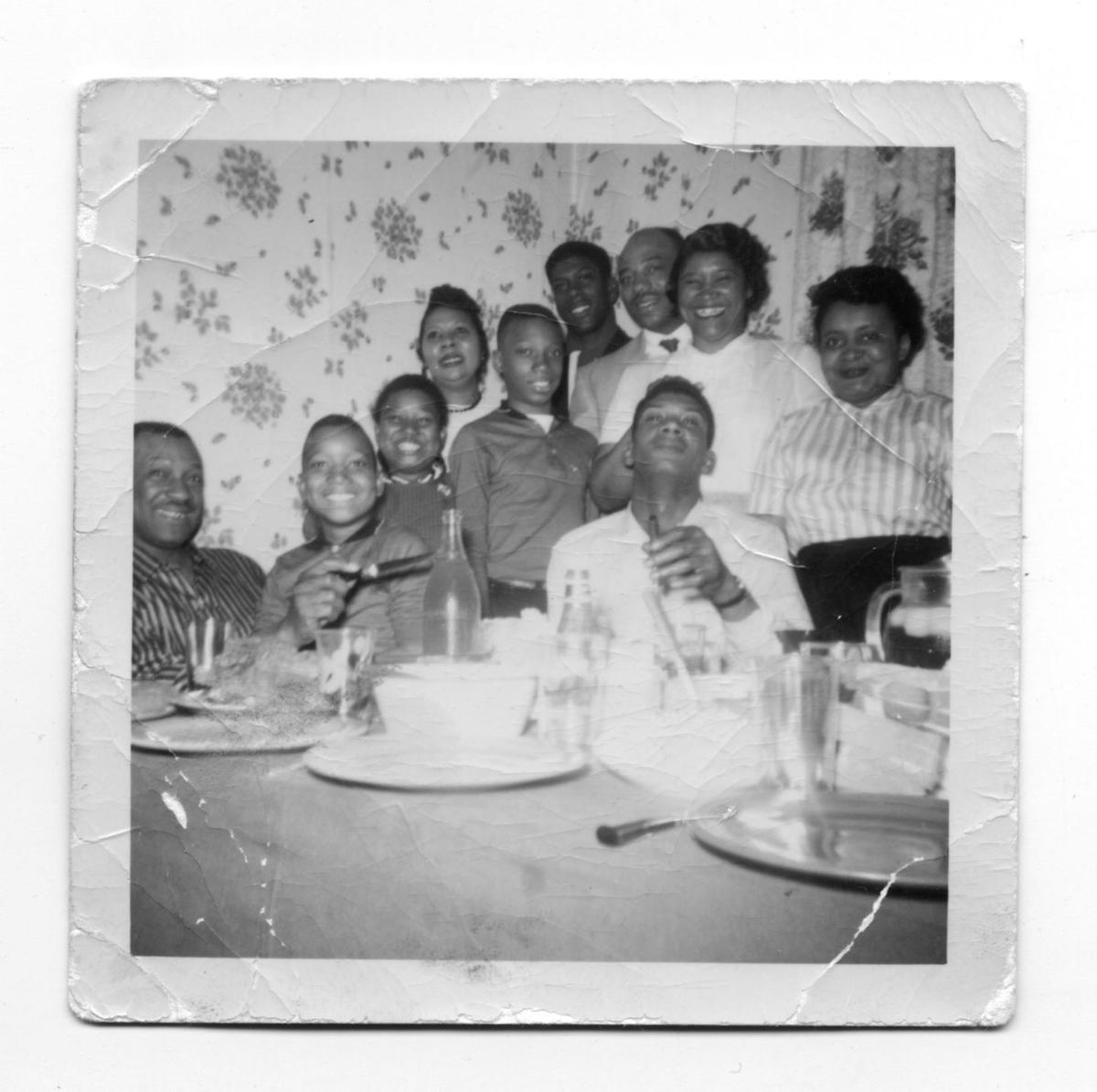 Fred Hampton (second from left, seated) holding a cigar at a birthday party 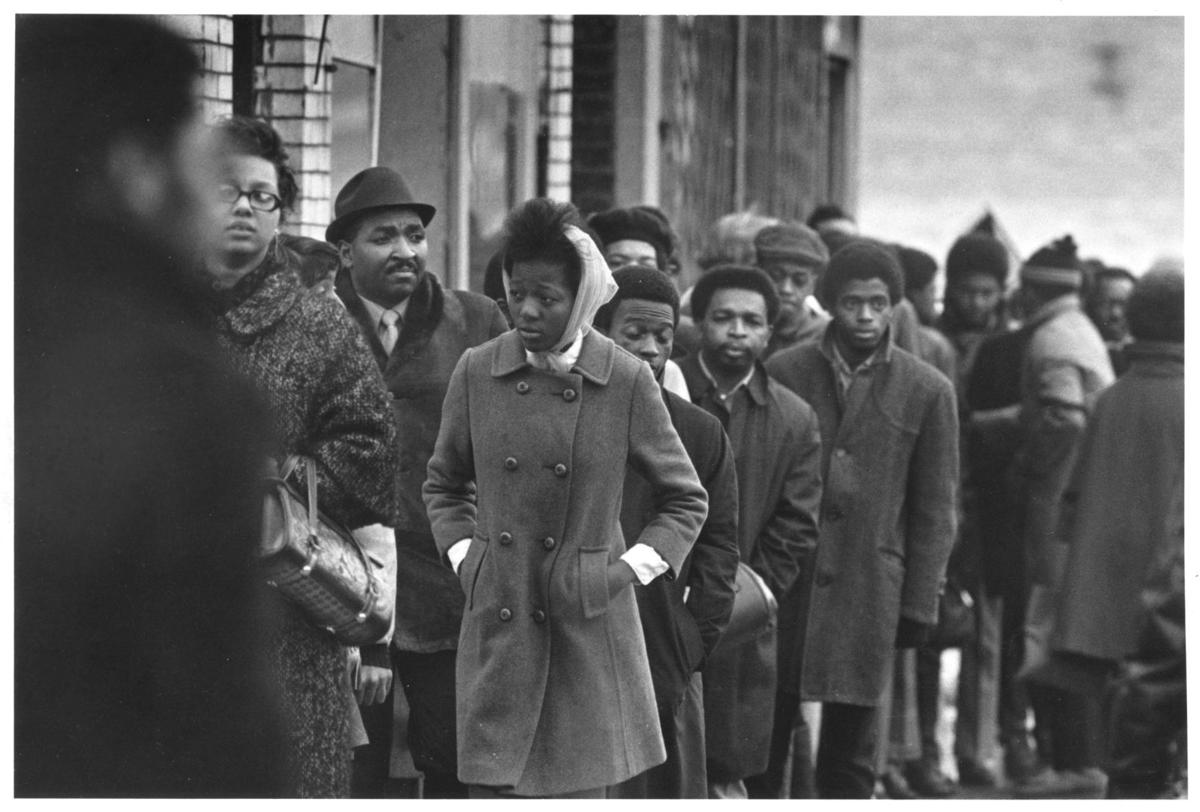 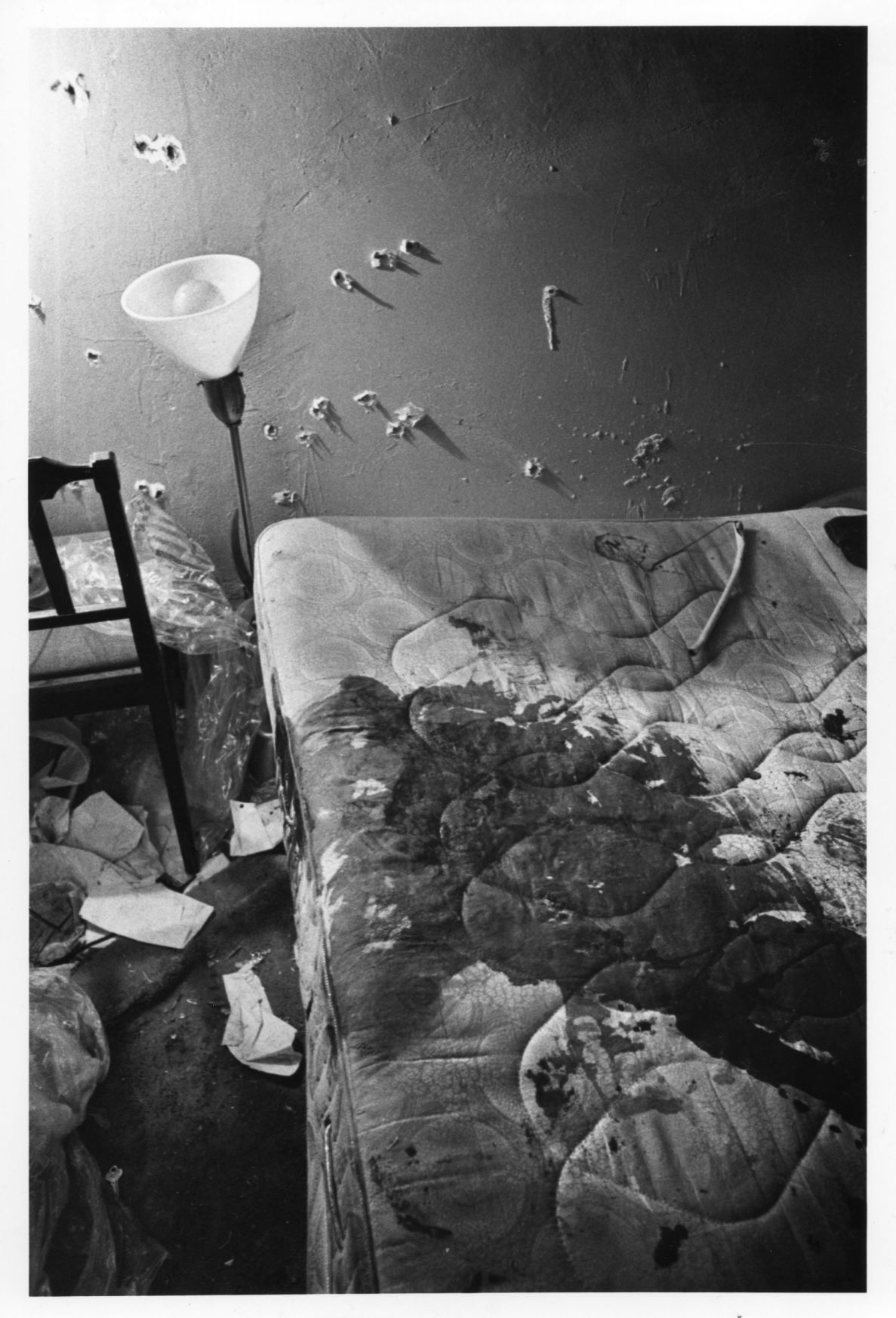 The bloodstained mattress on which Fred Hampton was killed 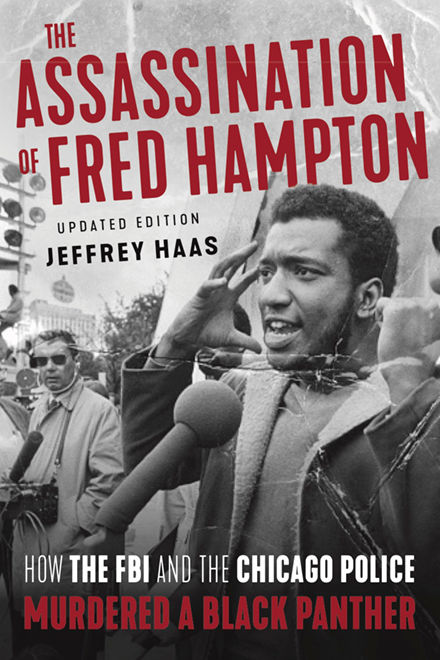 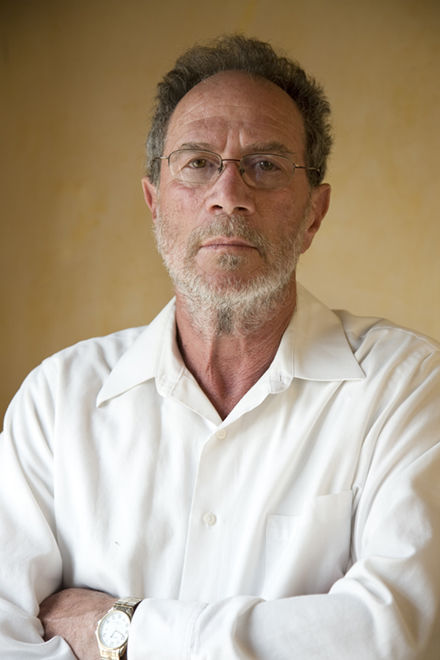 Fred Hampton (second from left, seated) holding a cigar at a birthday party

The bloodstained mattress on which Fred Hampton was killed

Author Jeffrey Haas in conversation with civil rights leader Aaron Dixon about The Assassination of Fred Hampton: How the FBI and the Chicago Police Murdered a Black Panther

In the pre-dawn of Dec. 4, 1969, 14 Chicago police officers knocked on the front and back doors of an apartment on West Monroe Street, a known residence of members of the Black Panther Party. The police entered before anyone answered. Six people inside were shot, and two of them died. Mark Clark, 22, was killed in the front room of the apartment, and 21-year-old Fred Hampton was killed in the back bedroom, where he lay sleeping next to his pregnant fiancée.

At first, law enforcement claimed that this was a justifiable raid to recover illegal weapons and that the Panthers turned it into a massive shootout. The police said they fired dozens upon dozens of shots in an attempt to defend their lives. But evidence soon revealed that the officers charged in, guns blazing. The only bullet fired by the Panthers came from Clark’s gun — the result of a postmortem spasm that caused him to fire into the ceiling after he was shot in the heart.

Hampton’s murder continues to capture the popular imagination, perhaps because of his age combined with his status as chairman of the Illinois chapter of the Black Panther Party, a movement that began in Oakland, California, in 1966. Hampton held the position for about a year before the police raid. Despite his youth, he was considered a trusted leader in the civil rights movement, within which he had come of age as an urban activist.

“The murder of Fred Hampton is the most well-documented case of a domestic assassination by the U.S. government that exists,” says Jeffrey Haas, a Santa Fe resident and one of the lawyers who pursued the civil case against the Chicago Police Department and the Federal Bureau of Investigation. The litigation took 13 years. In 1983, the seven survivors of the raid, as well as the families of Hampton and Mark, were granted a $1.8 million settlement from the city of Chicago, Cook County, and the federal government.

More than a quarter-century after the case concluded, Haas wrote a memoir of his experiences, The Assassination of Fred Hampton: How the FBI and the Chicago Police Murdered a Black Panther, originally published in 2009 by Chicago Review Press. The memoir reflects on his time with the People’s Law Office, which he co-founded in 1969, and his experiences as a political radical in the 1960s and ’70s. In December, Lawrence Hill Books published a new edition of The Assassination of Fred Hampton to coincide with the 50-year anniversary of Hampton’s death. Haas joins former Black Panther Seattle chapter co-founder Aaron Dixon for a conversation about the people and events chronicled in the book at Collected Works Bookstore (202 Galisteo St.) on Friday, Feb. 7, at 6 p.m.

Though Haas (pronounced “haze”) didn’t know Hampton well personally, the young black leader played a pivotal role in his life. An Atlanta native, Haas was just a few years out of law school at the University of Chicago when he heard Hampton speak at a West Side church in 1969. “That was when I changed from being a lawyer for the revolution to being a part of the revolution — or the movement, as we used to say.”

Haas, 77, says that in the book, “I wanted to personalize Fred Hampton because we know so much about how he was killed. But I also wanted people to identify with what a remarkable young man he was. How even as a kid, he had breakfast programs in the neighborhood. How in high school, he led walkouts because black girls were not allowed to be homecoming queens, and [to advocate for the hiring of] more black staff and teachers.”

Hampton’s August 1969 speech, which changed Haas’ worldview, occurred just a couple of days after Haas’ law partners got Hampton released from prison on an appeal bond. He’d served a few months of his sentence for allegedly stealing (and distributing to children) $71 worth of ice cream from an ice cream truck vendor in a schoolyard the previous summer.

“I went down to the prison in Menard, thinking we were the vanguard, but down there I got down on my knees and listened and learned from the people. I went down to the valley and picked up the beat of people. I’m high-ee, I’m high-ee off the people,” Haas remembers Hampton saying with the cadence of a Baptist preacher crossed with Sly and the Family Stone.

Four months later, Hampton was dead. “Fred always denied that he did the robbery,” Haas writes. At the time, Hampton had been advocating for swimming pools for black children in the Chicago suburb of Maywood (where he grew up). In the famously segregated Chicagoland, where blacks and whites didn’t swim together, Hampton wanted to give black kids more opportunity to take the edge off the summer heat. He was also involved with the Rainbow Coalition, a multiethnic social justice organization made up of blacks, Puerto Ricans, and poor whites whose families had moved to Chicago from Appalachia.

Hampton’s civil rights advocacy and persuasive popularity attracted the FBI’s attention, on top of scrutiny from local police. He was charged with mob action for the swimming pool protests. And then an eyewitness identified Hampton as the ice cream truck robber.

While going over details of that time for his book, Haas managed to unofficially clear Hampton of the crime. He met Thomas Blair, one of the Hamptons’ Maywood neighbors in the 1960s. “Blair told me he took and passed out the ice cream. His knowledge of the details, as well as his physique, which was similar to Fred’s, convinced me he told the truth,” Haas writes.

The Assassination of Fred Hampton is rich with such vivid true-crime details. We see Haas meet with Hampton’s fiancée, Deborah Johnson, just hours after the murders, in a jail visiting room while she is still in her nightgown, nine months’ pregnant and weeping throughout the conversation. Talking to Haas in 2020, you get the idea that he has told the story of each moment of this case innumerable times. It feels as though the events are a kind of drumbeat in his blood and marrow.

Yes, he says, he has gone over the facts many, many times since the morning of Dec. 4, 1969. He relived the entire case in order to write the book, and again to write the preface to the new edition. Although he has a lawyer’s instinct for lists and facts, he wanted to write something more than a legal tome, so on the advice of fellow political radical and memoirist Bill Ayers, he earned a graduate degree in creative writing from Bennington College when he was in his 60s.

“I really tried to give people an inkling of what it was like in Chicago in ’69. There was a strong movement against the Vietnam War, a very strong civil rights and Black Power movement. Students for a Democratic Society were in Chicago. We all felt that a system driven by racism, materialism, and militarism had to change. It felt like revolutionary times.”

The goals haven’t changed much in 50 years. People are still — or are again — marching in the streets for legal and social equality for people of all races and creeds, and for economic justice, prison reform, and basic rights to food, education, and health care. Gone, however, are the days where liberal and progressive civil rights groups advocate for armed revolution and self-defense. One of the Panthers’ most famous actions involved an armed group entering the California state capitol in 1967, which state law then allowed.

Haas says it was a different era. “Now, the groups that are pushing the idea of guns for revolution and self-defense are aligned with white supremacy. Having guns is about protecting themselves from the Other. Black Lives Matter has seen the power of the state and how they have used force [against activists]. BLM is less hierarchical than the Panthers, less dependent on a leader. In terms of tactics and rhetoric, it’s different today. But the things they organize to change are similar.”

Haas talks about the present for only a moment before he returns the conversation to Hampton’s murder and the ensuing legal drama. He wants people to know that this case was integral to uncovering the legally questionable activities of COINTELPRO, an FBI counterintelligence program that targeted the Black Power movement and other political groups during the Vietnam War era, including anti-war and feminist organizations.

“We showed there was a national program aimed at the Black Power movement, including against Martin Luther King. They thought it threatened the security of the United States. Congress was uncovering documents. We were uncovering documents. The parameters were to destroy, disrupt, and neutralize the Black Panther Party by any means necessary. This was a directive from J. Edgar Hoover,” he says.

He mentions the infamous date again, and starts the story again, the details sharp and precise.

“Dec. 4, 1969. Four a.m. Fourteen Chicago police officers came in a truck that appeared to be a gas truck, came to the front and back door of an apartment and knocked. …That morning, I woke up at 6:30 a.m. when my law partner knocked on my back door and told me the chairman had been killed.” ◀

[thumbup]Thank you Jeff for protecting law abiding citizens and Thank YOU for calling out over testosterone police officers who can't challenged by their id, ego, or maybe balance their yin/yang! So bang one for the people! Kudos