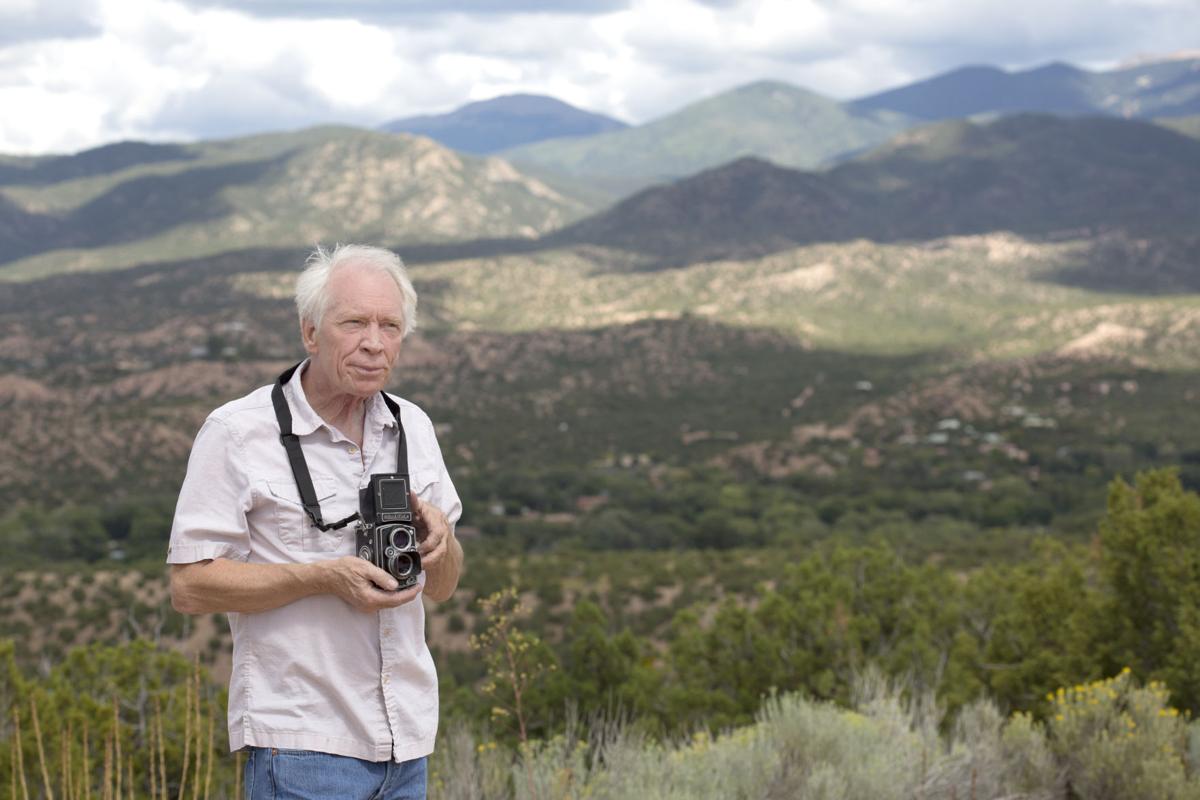 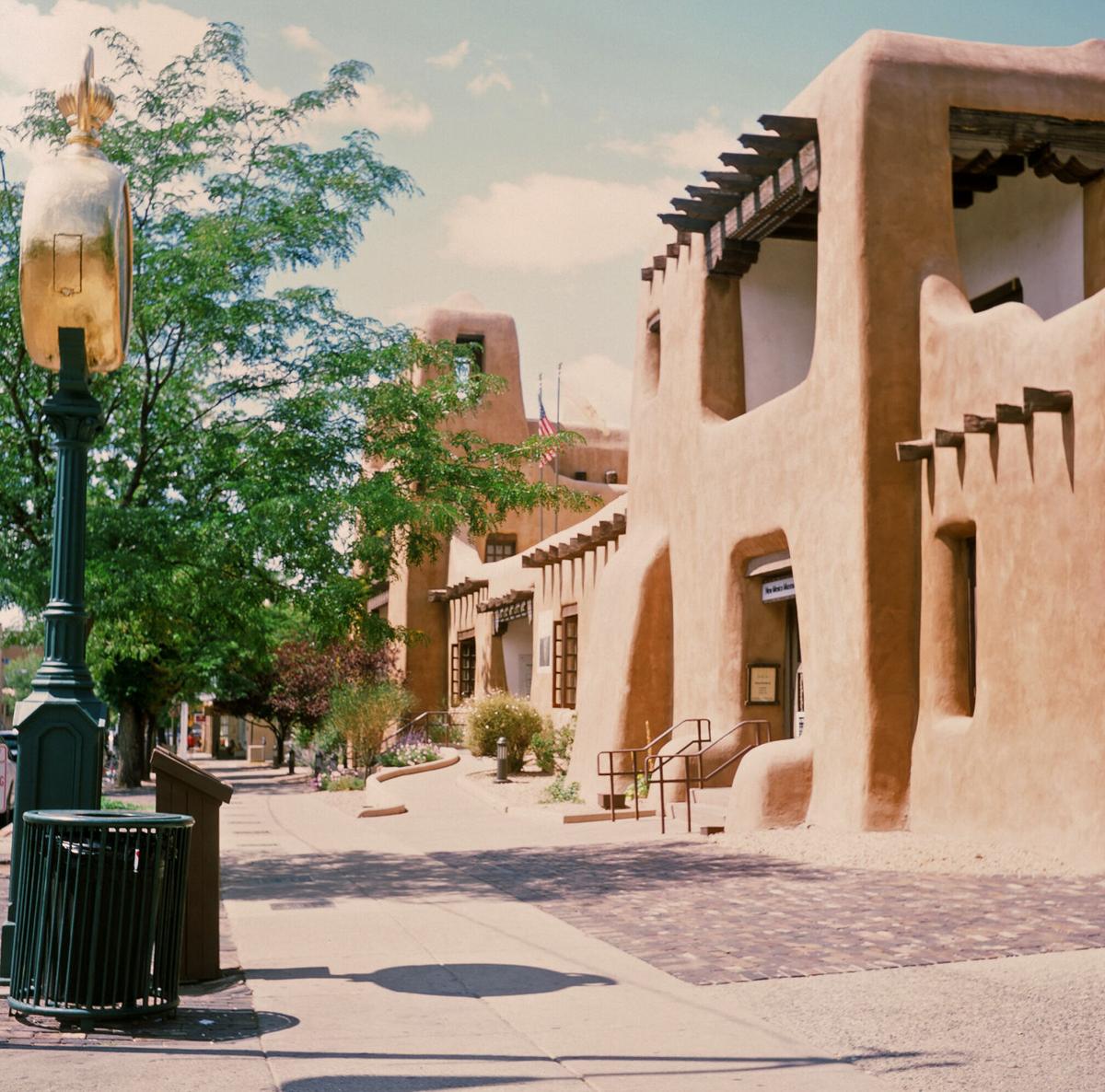 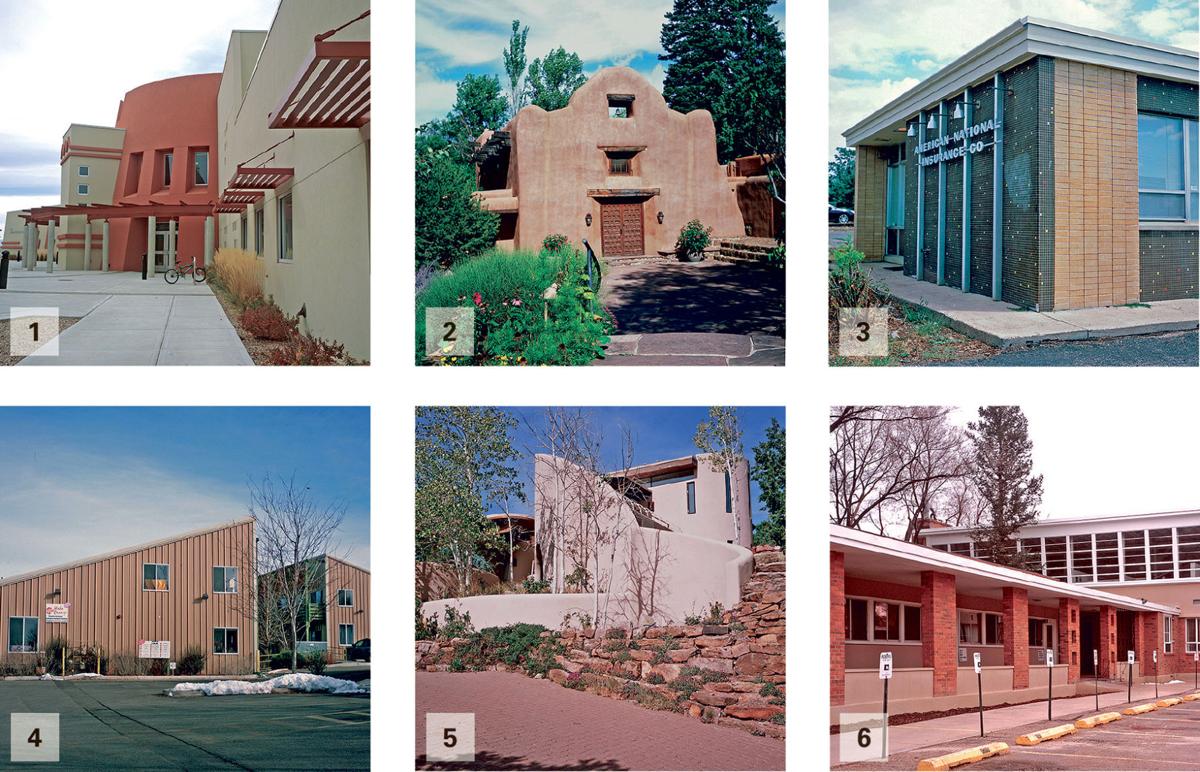 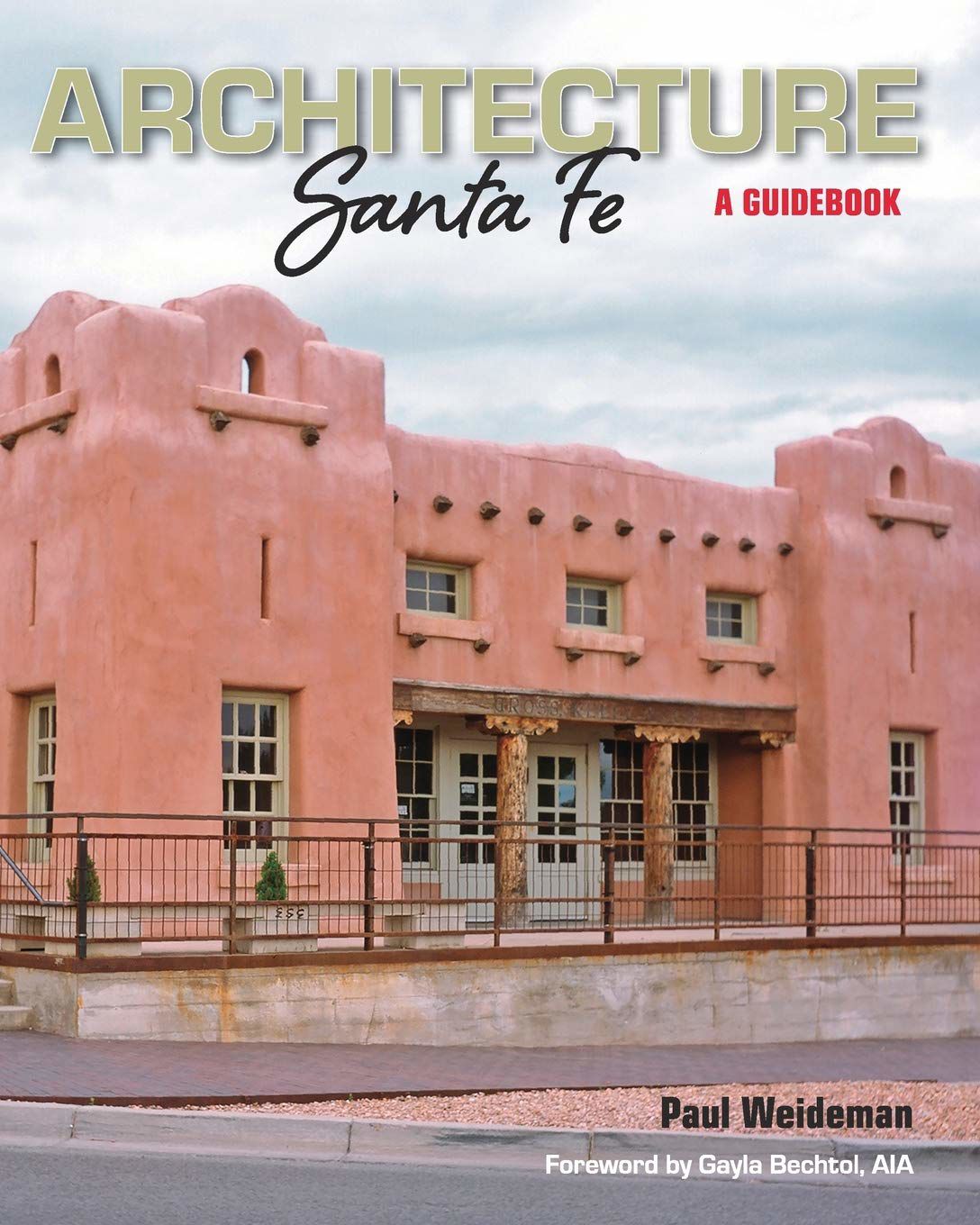 “Sixteen hundred and ten? I doubt it.” Paul Weideman is responding to a question about whether the scarred and pitted gate outside the courtyard of the Palace of the Governors was a part of the original structure.

He points at the exposed stonework at the corner of the building, which is across from the New Mexico History Museum on Lincoln Avenue.

“Some of that cobbled foundation that you see over here might be that early,” says Weideman, who, before going into semi-retirement in October, was the architecture columnist for Pasatiempo. “You know, the Pueblo Indians in the revolt, they tore it down and built their own building. Then the first governor after that tore their thing down and built another one, more or less.”

Weideman’s first book, ARCHITECTURE Santa Fe: A Guidebook (Running Lizard Press, 242 pages, $39.95), is a fascinating look at the development of local architecture and, specifically, the “Santa Fe style” that has dominated the architecture of the city’s historic districts since 1912. The 228-page book, which took eight years to complete, allowed the 69-year-old writer to combine two passions: architecture and photography. He gives a free talk and book signing at 6 p.m. on Monday, Feb. 17, at Collected Works Bookstore & Coffeehouse (202 Galisteo St.). He’ll be joined by Gayla Bechtol of the Santa Fe chapter of the American Institute of Architects, who wrote the foreword.

“I started liking buildings as a photographer,” says Weideman, who shot most of the book’s color photographs using a 1954 Rolleiflex twin-lens reflex camera. “Architecture gets to be an intriguing focus, because they have these interesting shapes and facades. In this book, one of the challenges in the photography was trying to get the sun on the facade of the buildings. You’ve got to look at the different seasons and times of day. If the building faces north, you’re never going to get the sun. In those situations, I always tried to photograph on a cloudy or overcast day. You’re looking to bring out the detail in the material.

“It was a special thing for this book, deciding to use the Rolleiflex,” he says. “It has its limitations but it was also fun to use.” In the book, he mentions the camera’s multi-function viewing hood, which he calls “an ingenious contraption” that allows the user to hold the camera at chest level and stare down into a ground glass to focus. You can also hold it over your head, instead of at eye-level, and gaze up into the viewfinder.

“Film photographers well know the (scary) delight of anticipation, after making a photograph in their mind, then in the camera,” he writes.

Weideman was born in Indianapolis and raised in Ohio and Michigan. He lived in Southern Rhodesia from ages 11 to 15, when his father worked for a Ford plant there. He started working for newspapers in 1984, after earning a degree in editorial journalism from the University of Washington in 1983. He’s been a photographer for most of his life. “My first camera was a twin-lens reflex Argus that I had when I was a kid in Africa.”

Weideman worked for a local paper in Snoqualmie, Washington, for about eight years before moving to New Mexico. “I was lining up the school kids every month for the good citizens, shooting and covering planning issues and murders and everything, but I felt like I was in a rut and could have done the same thing forever. I needed to make a break.” He spent a week in New Mexico in 1991 and moved here a year later. “A lot of things about it drew me, including the architecture. Some of my earliest pictures I took when I came here were of the historic churches north of Taos, where I lived for the first couple of years,” says Weideman, who spent the past 23 years working for The New Mexican and is editor of the paper’s Home/Santa Fe Real Estate Guide. “I lived in San Cristobal, by the D.H. Lawrence Ranch. Before that, I lived in my VW bus.”

Since arriving in New Mexico, architecture has been the major focus of his photography, and his love for the subject is reflected in the book.

After an introduction by Weideman, six chapters trace the development of the city’s architecture — from early construction using puddled adobe to the adaptive reuse of historic architecture in contemporary designs. These early chapters explain how the Santa Fe style, which is largely informed by the Spanish Pueblo Revival, rose out of an attempt at historic preservation, and how that was tied to tourism and the arrival of the railroad in New Mexico.

A photographic sampler of the local architecture follows. Some of the extended captions discuss the materials used in construction, and some examine the builder or architect. The survey includes photos of excavated Pueblo ruins, private residences, historic churches, commercial structures, and museums in Santa Fe County.

“Before 1912, you have more Victorian designs, like the surveyor general’s quarters and the Catron Block on the Plaza — which is now painted brown, so it doesn’t look like the brick building that it was,” Weideman says. “When the train came in 1880, it was going to be this huge surge of business and development. But the train bypassed us and stopped at Lamy instead. We did a spur line from Lamy to here, but it never resulted in an explosion of new business and population growth. The city was trying to find something to help get the economy going. They said, ‘Let’s make our historic architecture the thing.’ ”

Weideman traces this evolution to an exhibition, New-Old Santa Fe, which opened at the Palace of the Governors on Nov. 18, 1912. That year, archeologist Jesse Nusbaum, who would go on to become the first curator of what is now the New Mexico Museum of Art, canvassed the city, photographing old buildings to include in the exhibition as examples of its antiquity and distinctive structures.

In its chronological treatment of the unfolding of the Santa Fe style, Weideman’s book concerns itself with an artistic lineage, particularly in regards to how contemporary designs pay homage to older styles and work within the greater historical context.

“Only someone who understands this architecture, and the creation of it, can ask the meaningful questions of the experts,” Bechtol writes about Weidman in her foreword. “With his unique access he is able to describe changes in technique and opinion, and describe what this means to Santa Fe style, and to the urban design of our community.”

Some of the buildings that are now considered Spanish Pueblo Revival style include the New Mexico Museum of Art, the IAIA Museum of Contemporary Native Arts, the School for Advanced Research, the Laboratory of Anthropology on Museum Hill, and some structures less familiar to the layman, like John Gaw Meem’s architectural-design office.

As a photographer, Weideman wasn’t just interested in history. He was also focused on the compelling shapes and designs found on 114 buildings across town (and that’s just what’s in the photographic sampler).

“You have to do the Palace and San Miguel Chapel, the obvious ones,” he says. “But, after that, I was kind of just choosing ones I liked.”

When it came time to lay out the design for the photographic section, he discovered an interesting correspondence between the images on facing pages. He points out a similarity between the architecture of the Institute of American Indian Arts Center for Lifelong Education, built in the early 21st century, and a 2008 building on Guadalupe Street in the Santa Fe Railyard district that’s home to several art galleries and is an example of adaptive reuse. (It was originally a 1950s-era Sears warehouse.) “They both just happen to have these hanging canopies that sort of echo each other.”

He turns to another serendipitous pairing of divergent styles: the diagonal sweep of the angular Second Street Studios, built in the 1990s, and a diagonal built into the curvilinear wall of a residence designed by architect Bart Prince in 1993. “It’s just an interesting thing that happened in arranging the photos chronologically,” Weideman says.

And while the book is a sweeping survey of local architecture, it’s by no means complete, he says. “I could do another whole book with all the ones I didn’t choose.” ◀