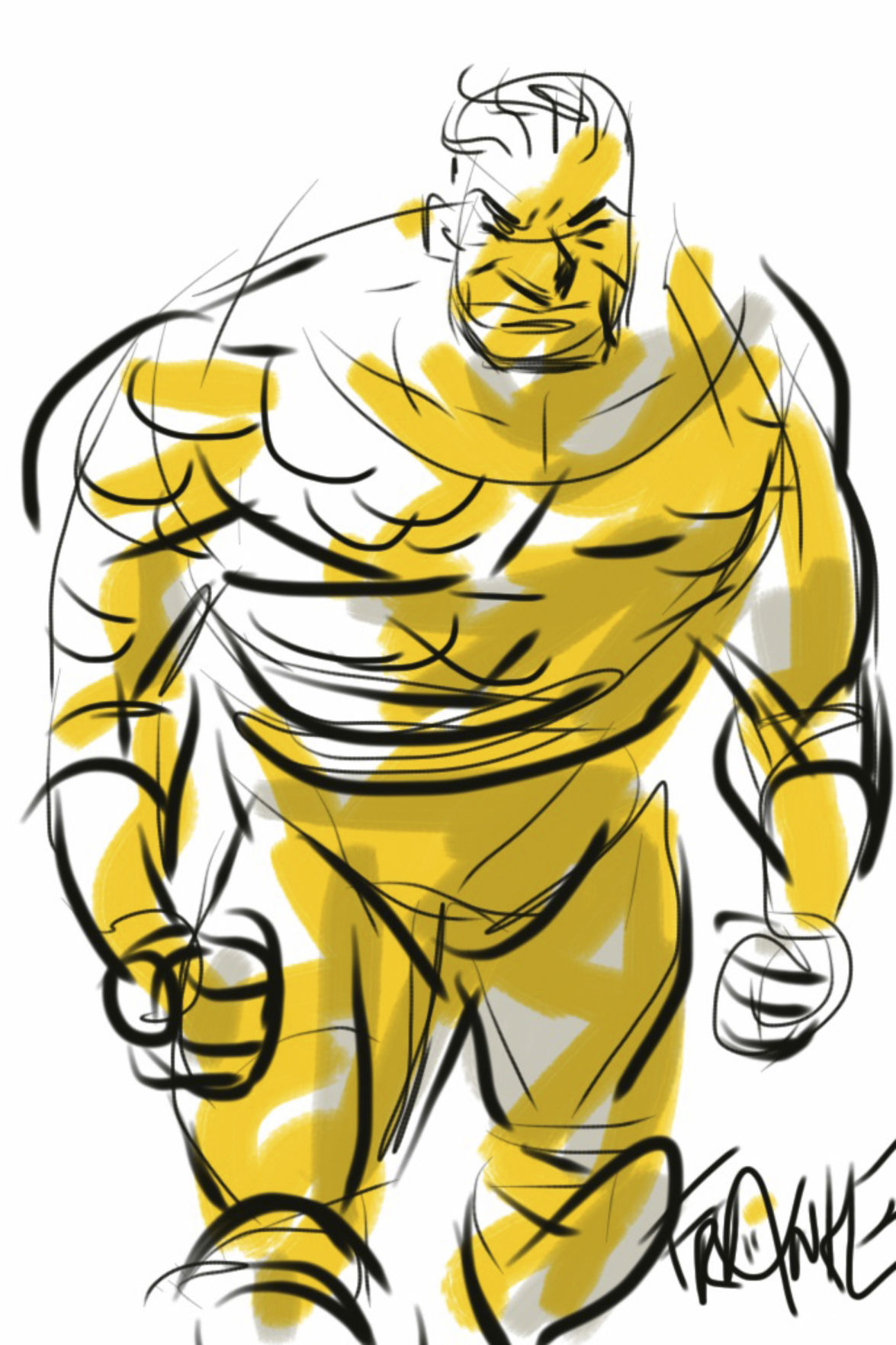 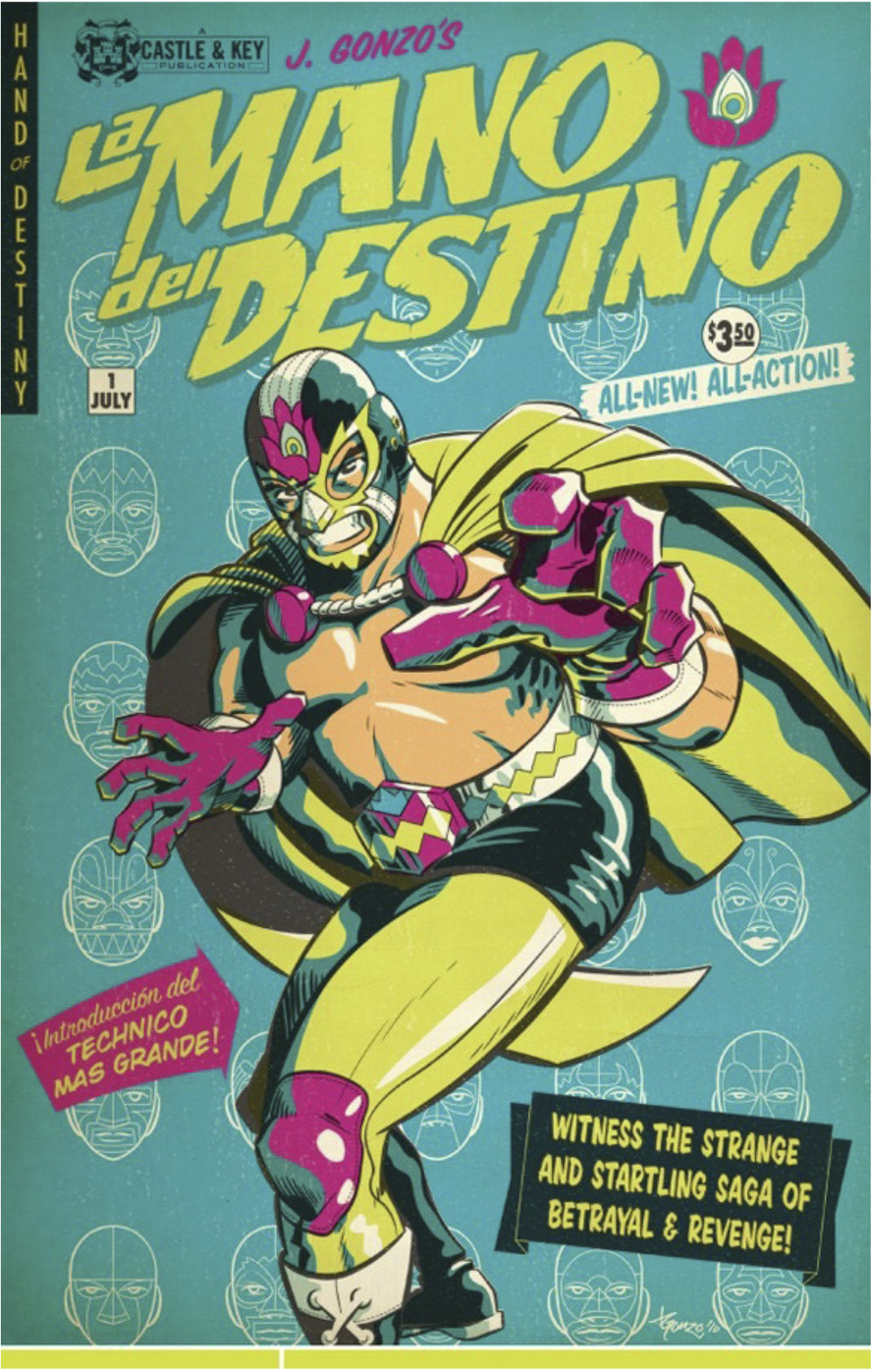 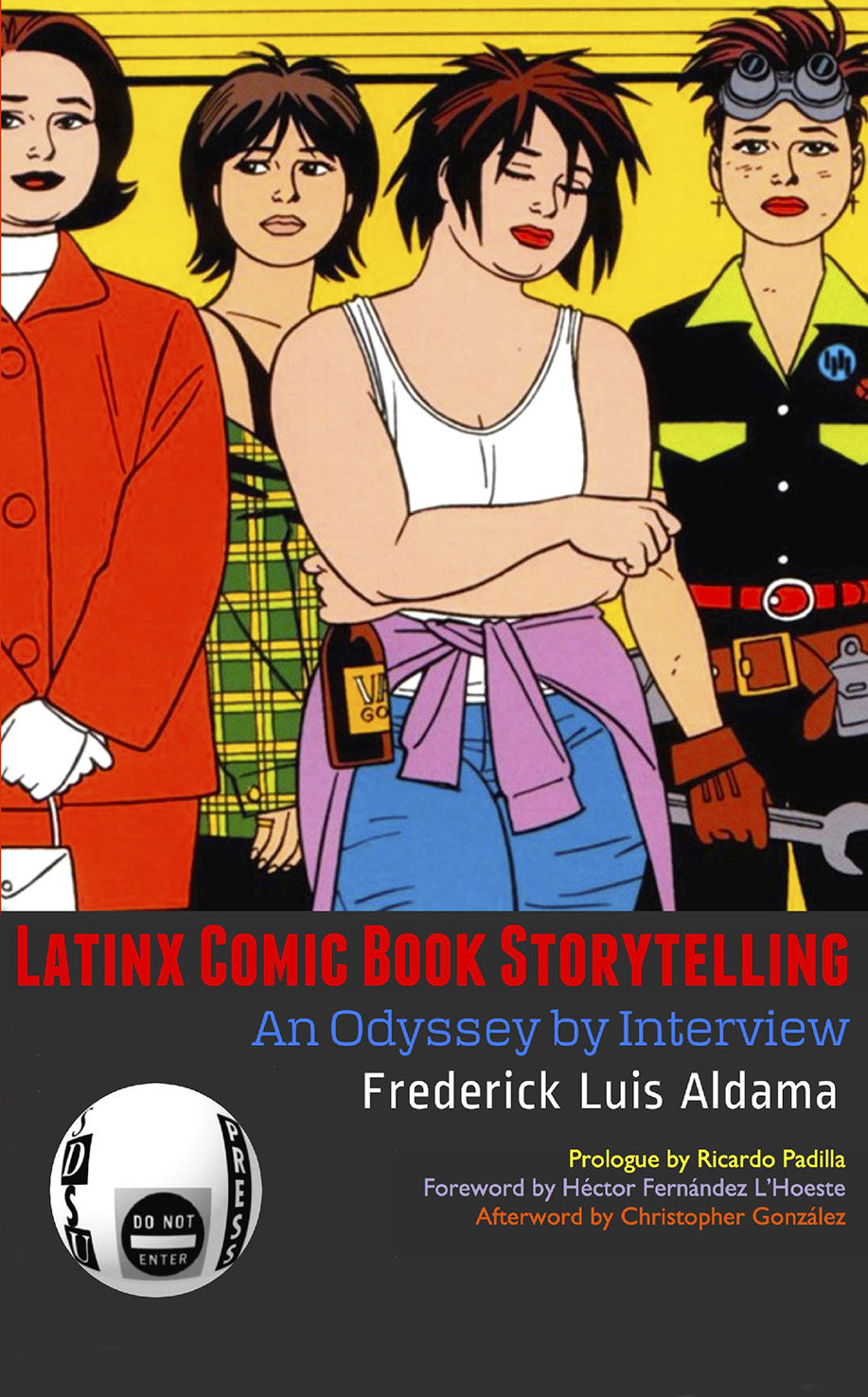 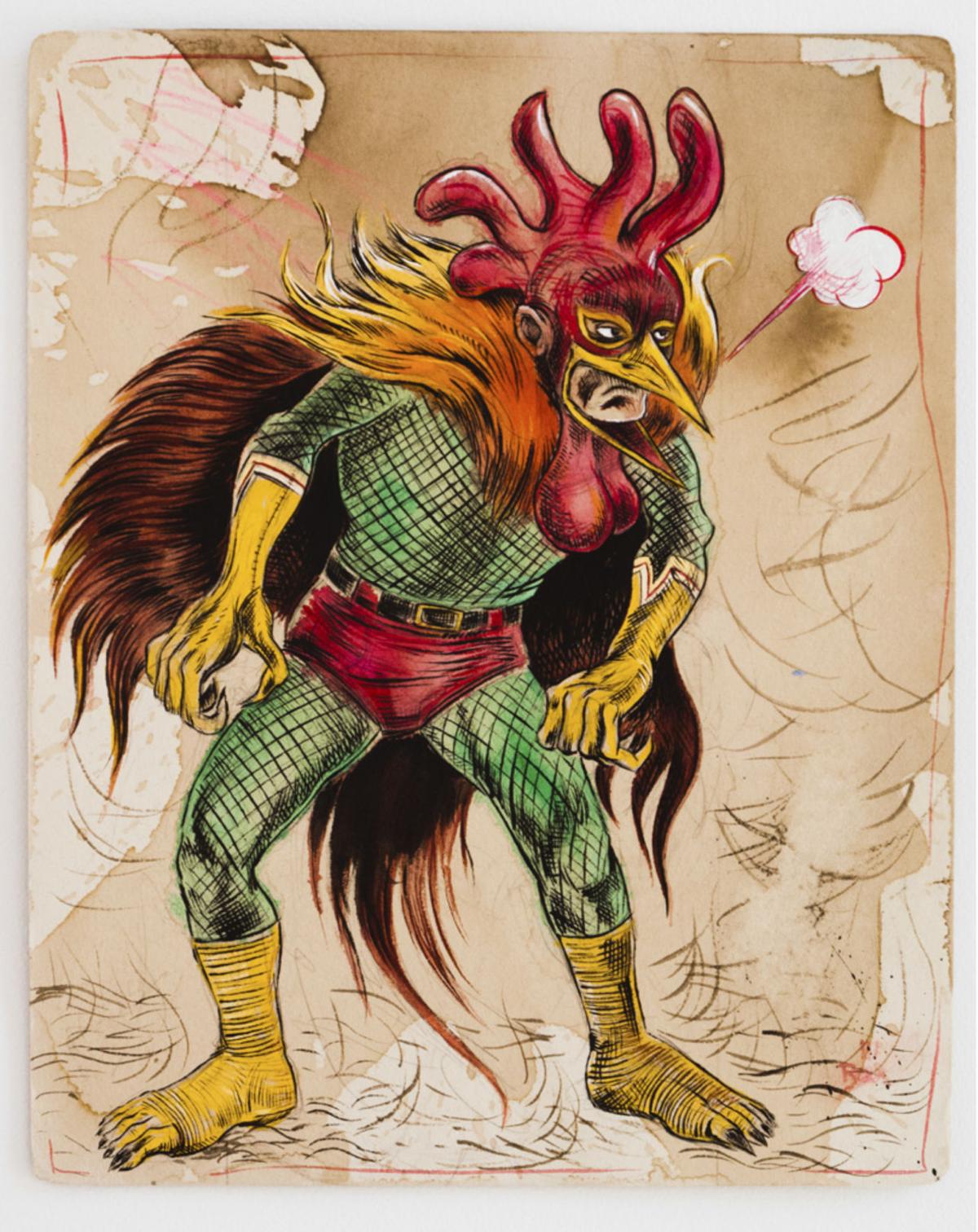 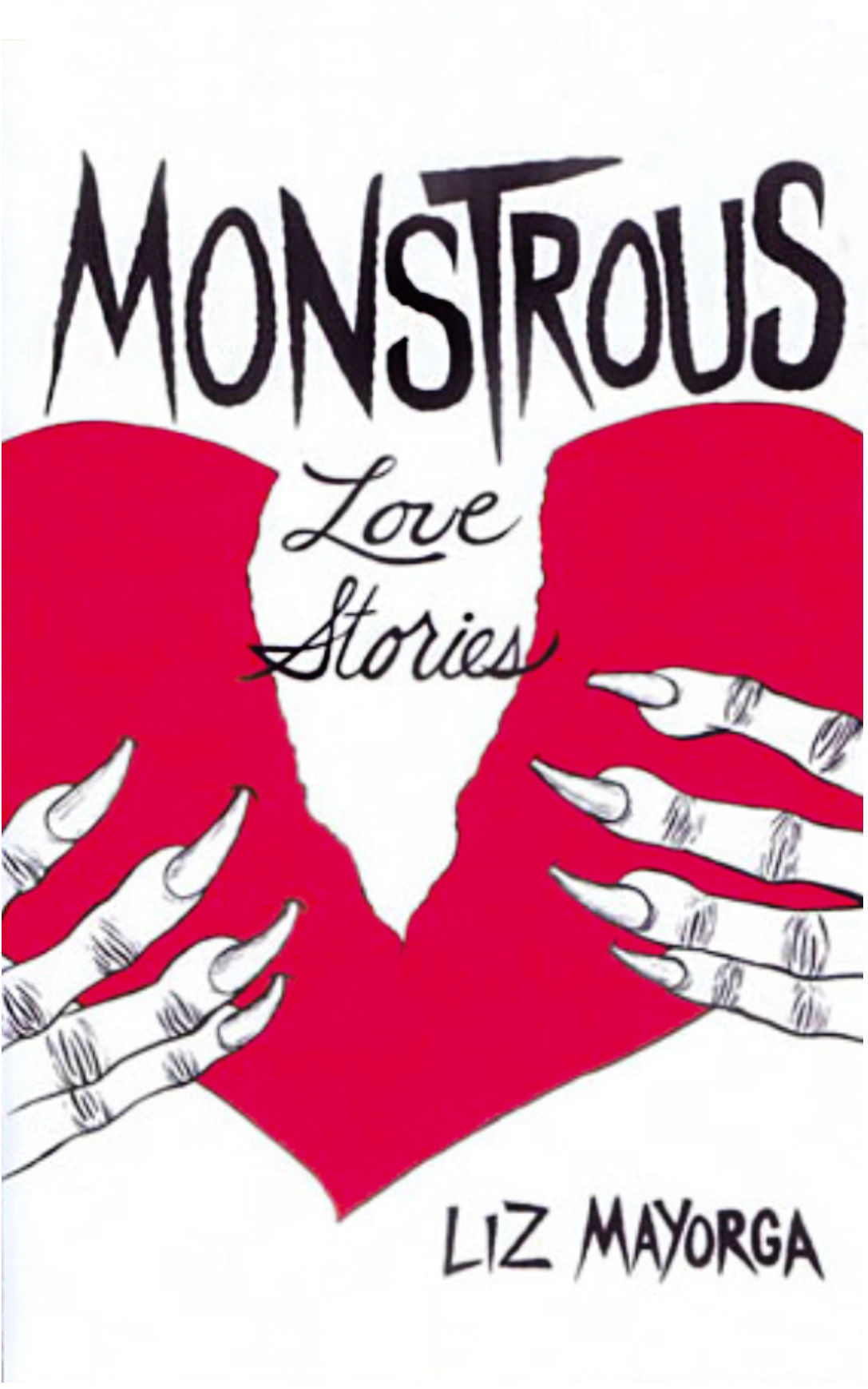 If Latinx Comic Book Storytelling: An Odyssey by Interview were merely Frederick Luis Aldama’s fifth book on the subject in 10 years, that feat alone would be impressive. (Latinx, pronounced “La-teen-ex,” is a term that is both gender-neutral and trans-inclusive that has emerged primarily in academia and activist social media to refer to persons of Latin American heritage.) But Aldama’s new tome on the ever-expanding universe of Latinx comics is also one of 29 books he has published in the last 14 years. It’s a vast oeuvre that includes Aldama’s own bilingual flash fictions along with his well-regarded studies of Latinx pop culture, cinema, fiction, sports, and multicultural modes of humor. A distinguished professor of arts and humanities at the Ohio State University, Aldama also lectures on video games and visual art, directs the university’s Latino and Latin American Space for Enrichment Research (which he also founded), and serves as an affiliate faculty member at the Center for Cognitive and Behavioral Brain Imaging.

With a schedule that packed and a roster of intellectual pursuits that deep, why has this man written five books on Latinx comics? Aldama makes a point that is bolstered by the number of comic artists interviewed in this anthology: Latinx comics may be the 21st-century’s only art form that has remained vital and accessible to young people while still managing to convey the histories, politics, and mythologies of Mesoamerica and the Caribbean and also speaking to the deeply personal conflicts of their readers. With their tendency to be caught between worlds, comic book heroes flex their superpowers as they transcend the mundane struggles that ensnare so many, including a dysfunctional family life, an uncaring culture, or an unforgiving job.

“With an absentee father, you are forced to define manhood yourself. Comics were an obvious draw. Superheroes especially,” says Alex Olivas, a Washington, D.C.-based comic artist interviewed in the book. Olivas’ own father was both a social activist and a federal inmate. “They used the same formula that Disney used: victimized orphans dealing with the legacy of their parents who become social crusaders. At their worst comics are male adolescent power fantasies. At their best they taught generations of children to read. These stories taught fatherless boys and girls about morals and ethics. ... Comic books allowed me to explore my Latino heritage and to define manhood for me. They were sacred to me.” Olivas is best known for his Tzolken series, graphic novels reimagines the fall of the Aztec Empire to Spanish conquest, as a shock troop of elite Maya warriors muscle their way into Tenochtitlan to rescue Aztec royals and their holy artifacts.

The interviews that make up this book delve deep, pushing Latinx comic book artists to think back to childhood, when they first encountered the genre. Often, Aldama solicits earnest answers about how these authors find money and time to draw. But what makes the book particularly compelling is the way Aldama manages to elicit responses to show how these comic book artists connect their work back to the early 20th-century wave of populist Latin American muralists.

In his interview, graphic novelist Raúl González III, who grew up in El Paso-Ciudad Juárez, says, “I love how [ José Guadalupe] Posada and his publisher Arroyo set out to make chapbooks for poor people so that they could be introduced to knowledge. Posada also had an open studio policy, and kids could walk in and see him drawing. Some of these kids who learned from him were Diego Rivera and [ José Clemente] Orozco.” González’s debut graphic novel, Lowriders in Space, written by Cathy Camper and published by Chronicle Books, is a masterful mix of visual and cultural code-switching. The vibrant illustrations borrow from the some of macabre populism of Posada’s skeletons, Disney’s gimlet cartoon characters, and the woodsy fantasia of Maurice Sendak’s monsters.

Now a highly regarded artist in Boston who has taught at the city’s Institute of Contemporary Art and its Museum of Fine Art, he credits the convenience store comic book rack with introducing him to another way of life as a child. “My local 7-Eleven became my quiet, safe space — my museum of fine arts,” he says in the book.“I could study the way illustrators created their drawings. I copied images from my favorite panels, and before long I had stacks of drawings.”

Los Angeles artist Liz Mayorga draws black-ink narratives such as Monstrous Love Stories and A Caxcan Guerilla Takes Over the Awkward Girl, identity-based tales that blend her upbringing in the 1990s punk zine scene with her family’s heritage in rural Zacatecas, Mexico. She grew up writing and drawing during breaks in her family’s restaurant business. Her interview is blunt about the financial rewards of drawing stories. She says, “I encourage [fans] to create as as much as possible, but I tell them that I don’t see this as a job. I am honest about what I do and why. I tell people it’s difficult to find steady employment of any kind today, let alone in comics.”

But her honesty isn’t despairing. After all, like most of the artists interviewed in this collection, comics aren’t the antithesis of literary culture. The genre allows them to work out some of the central conflicts inherent in many Latinx identities today. ◀