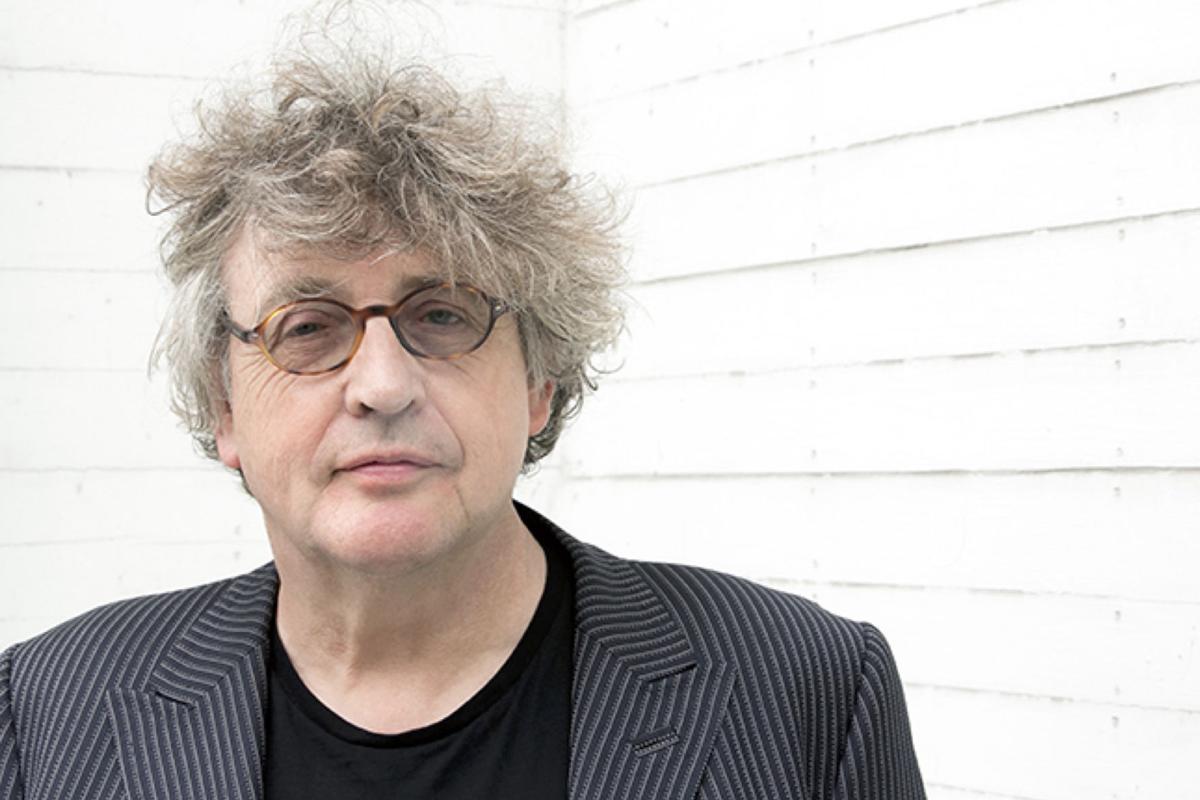 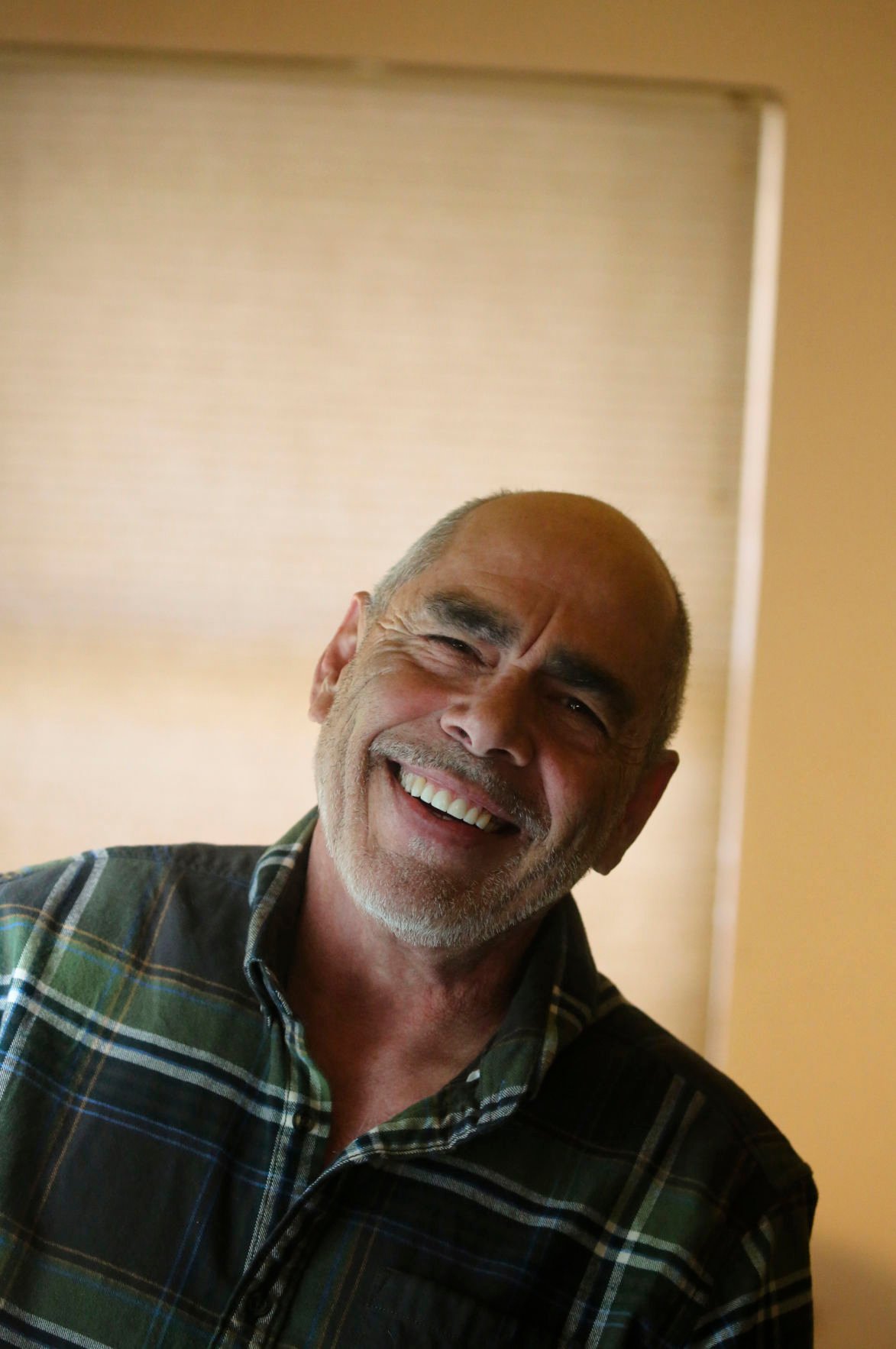 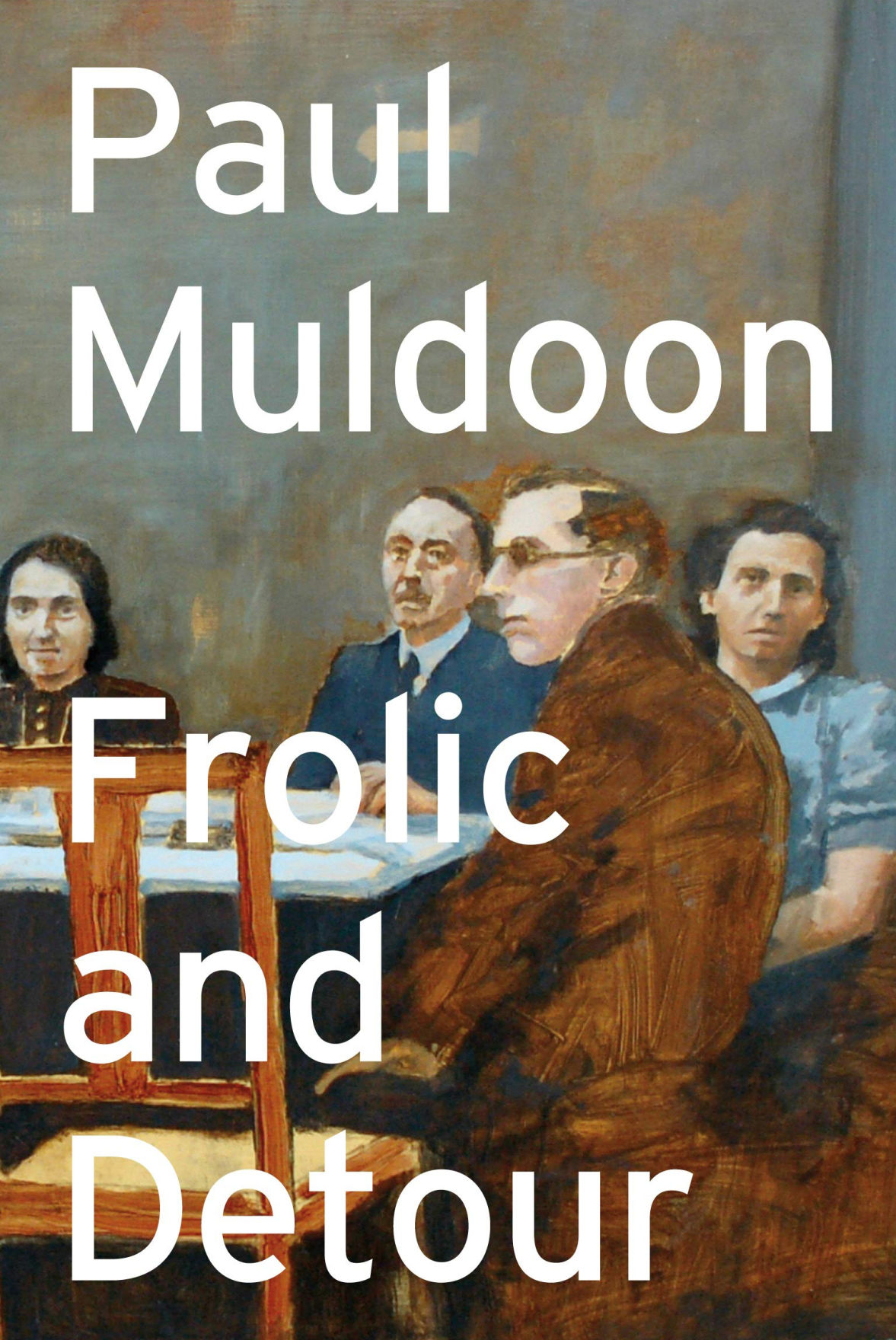 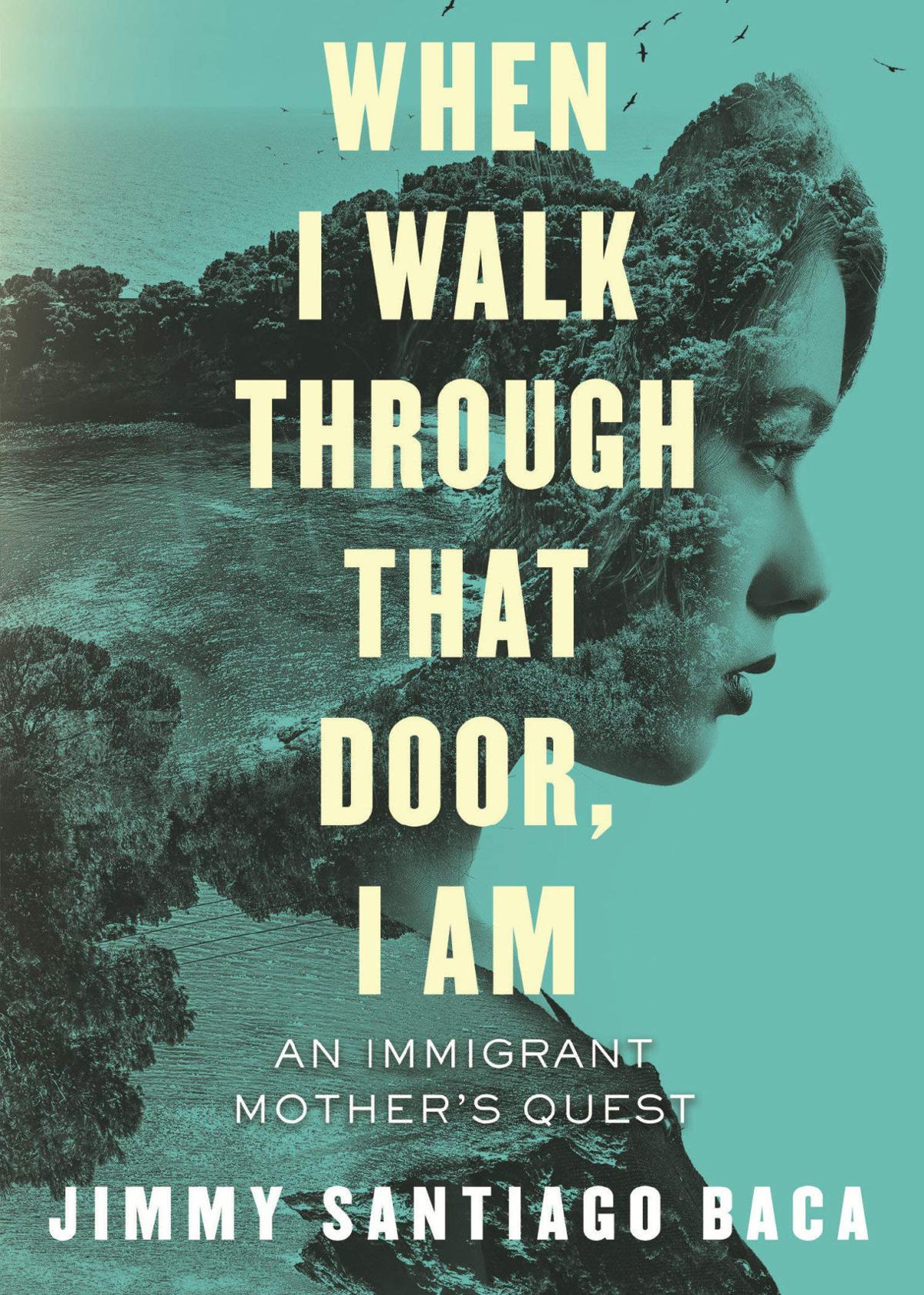 Paul Muldoon and Jimmy Santiago Baca are children of the same era, born within six months of each other, smack in the middle of the 20th century. One grew up in an Irish village, the other on the streets of Albuquerque. Back then, it would have been difficult to predict that both would rise to the top tier of the mainstream poetry world, winning numerous awards and accolades, embraced by academics, as well as street poets.

The son of a schoolteacher and a farmer, Muldoon was born in the summer of 1951 and grew up near The Moy, in Northern Ireland. Twenty years later, he was finishing his first poetry collection, Knowing My Place, and knocking around pubs with a group of Irish poets that included Seamus Heaney, with whom Muldoon studied at Queen’s University in Belfast.

Born in Santa Fe, Baca greeted the world just after New Year’s Day, 1952, but was abandoned by his parents and stuck in an Albuquerque orphanage by his grandmother. He ran away at 13, and, by the early 1970s, he was in prison on drug charges. He taught himself to read when he was behind bars and soon he was writing poems. The natural-born wordsmith published his first book of poetry, Immigrants in Our Own Land, in 1979, with help from the poet Denise Levertov. In 1987, Baca received the National Book Award for Poetry for his semi-autobiographical novel in verse, Martin and Meditations on the South Valley.

Muldoon moved to the United States in 1987 and won the Pulitzer Prize for his 2002 collection Moy Sand and Gravel. He is the Howard G.B. Clark Professor of the Humanities and founding chair of the Peter B. Lewis Center for the Arts at Princeton University. His most recent book is Frolic and Detour (2019). Baca leads writing workshops with students of all ages at schools, colleges, reservations, barrio community centers, housing projects, and correctional facilities throughout the country. His most recent book is When I Walk Through That Door, I Am: An Immigrant Mother’s Quest (2019).

“I was reading Baca recently and I could just taste the soil, the leaves. The work struck so richly in my heart,” says Argos MacCallum, artistic director of Teatro Paraguas, where Muldoon and Baca were scheduled to read together on Sunday, March 22, an event that has been cancelled due to health concerns. “He evokes the whole feeling of New Mexico and the acequias and the mountains. His poetry is so humble and his heart is so big. He is really is a champion of the people.”

In advance of the now-canceled event, the two poets offered Pasatiempo their thoughts on a classic poem by the other. Muldoon takes on Baca’s “Immigrants in our Own Land” from 1979, and Baca tackles Muldoon’s “Anseo” from 1980.

The poem “Anseo” opposes this unruly era’s compliance epidemic, seemingly all about people surrendering their free wills and individuality for hand-wringing blind obedience, glitter of trinket-awards has hypnotized them. Nice to see a haughty character at lands-end waving goodbye to the ship of fools society has become, Anseo ... I like the spirit of the poem — stubborn, instead of a laureate, chlorox-life abiding by fire-drill political correctness, media-induced paranoia, humped-hearted cringing curtsier, Joseph Mary Plunkett Ward says nay, brethren, as has every rankled free-thinker from Mayan kings to Zapata and Che and Villa, invoking the lover of freedom and life’s mantra, I would rather die on my feet (or in this case get beat) than live on my knees. — Jimmy Santiago Baca

When the Master was calling the roll

At the primary school in Collegelands,

You were meant to call back Anseo

And raise your hand

As your name occurred.

All present and correct,

Was the first word of Irish I spoke.

The last name on the ledger

And was followed, as often as not,

A nod and a wink, the Master’s droll

‘And where’s our little Ward-of-court?’

I remember the first time he came back

The Master had sent him out

To weigh up for himself and cut

A stick with which he would be beaten.

After a while, nothing was spoken;

He would arrive as a matter of course

He had whittled down to a whip-lash,

Its twist of red and yellow lacquers

And altogether so delicately wrought

That he had engraved his initials on it.

In a pub just over the Irish border.

He was living in the open,

In a secret camp

On the other side of the mountain.

He was fighting for Ireland,

And he told me, Joe Ward,

Of how he had risen through the ranks

How every morning at parade

His volunteers would call back Anseo

And raise their hands

As their names occurred.

Immigrants in Our Own Land

One of the things I love about “Immigrants In Our Own Land” is the odd combination of timeliness and timelessness that so often hovers around a really successful poem. To be of any use it seems a poem must be of its moment but also have it in it to transcend its moment. That specificity begins in the vocabulary of the poem — the term “brogan boots” or the phrase “to shoot me over/a little more soap” — as well as in the observation that the laundry lines in prison are replicating the laundry lines in the tenements from which the speaker comes. The fact that the “internal exile” at the core of the poem is an ongoing, perhaps even universal, phenomenon is at once mind-expanding and heartbreaking. Paradoxically, it’s one of those poems one wishes was less relevant than it so clearly is. — Paul Muldoon

We are born with dreams in our hearts,

looking for better days ahead.

At the gates we are given new papers,

our old clothes are taken

We are given shots and doctors ask questions.

Then we gather in another room

where counselors orient us to the new land

we will now live in. We take tests.

Some of us were craftsmen in the old world,

good with our hands and proud of our work.

Others were good with their heads.

use glasses and books to reach the world.

But most of us didn’t finish high school.

The old men who have lived here stare at us,

We pass them as they stand around idle,

leaning on shovels and rakes or against walls.

Our expectations are high: in the old world,

they talked about rehabilitation,

about being able to finish school,

and learning an extra good trade.

But right away we are sent to work as dishwashers,

to work in fields for three cents an hour.

The administration says this is temporary

So we go about our business, blacks with blacks,

chicanos and indians by themselves.

The administration says this is right,

no mixing of cultures, let them stay apart,

We came here to get away from false promises,

from dictators in our neighborhoods,

who wore blue suits and broke our doors down

when they wanted, arrested us when they felt like,

swinging clubs and shooting guns as they pleased.

But it’s no different here. It’s all concentrated.

our minds deteriorate, we learn nothing of value.

Our lives don’t get better, we go down quick.

My cell is crisscrossed with laundry lines,

my T-shirts, boxer shorts, socks and pants are drying.

Just like it used to be in my neighborhood:

from all the tenements laundry hung window to window.

Across the way Joey is sticking his hands

through the bars to hand Felipé a cigarette,

men are hollering back and forth cell to cell,

or somebody downstairs hollers angrily

about a toilet overflowing,

or that the heaters don’t work.

I ask Coyote next door to shoot me over

a little more soap to finish my laundry.

I look down and see new immigrants coming in,

mattresses rolled up and on their shoulders,

looking around, each with a dream in their heart,

thinking they’ll get a chance to change their lives.

But in the end, some will just sit around

talking about how good the old world was.

Some of the younger ones will become gangsters.

Some will die and others will go on living

without a soul, a future, or a reason to live.

Some will make it out of here with hate in their eyes,

but so very few make it out of here as human

as they came in, they leave wondering what good they are now

as they look at their hands so long away from their tools,

as they look at themselves, so long gone from their families,

so long gone from life itself, so many things have changed.

“To be of any use it seems a poem must be of its moment but also have it in it to transcend its moment.” — Poet Paul Muldoon

Ugh. What ever happened to the great Walt Whitman ?