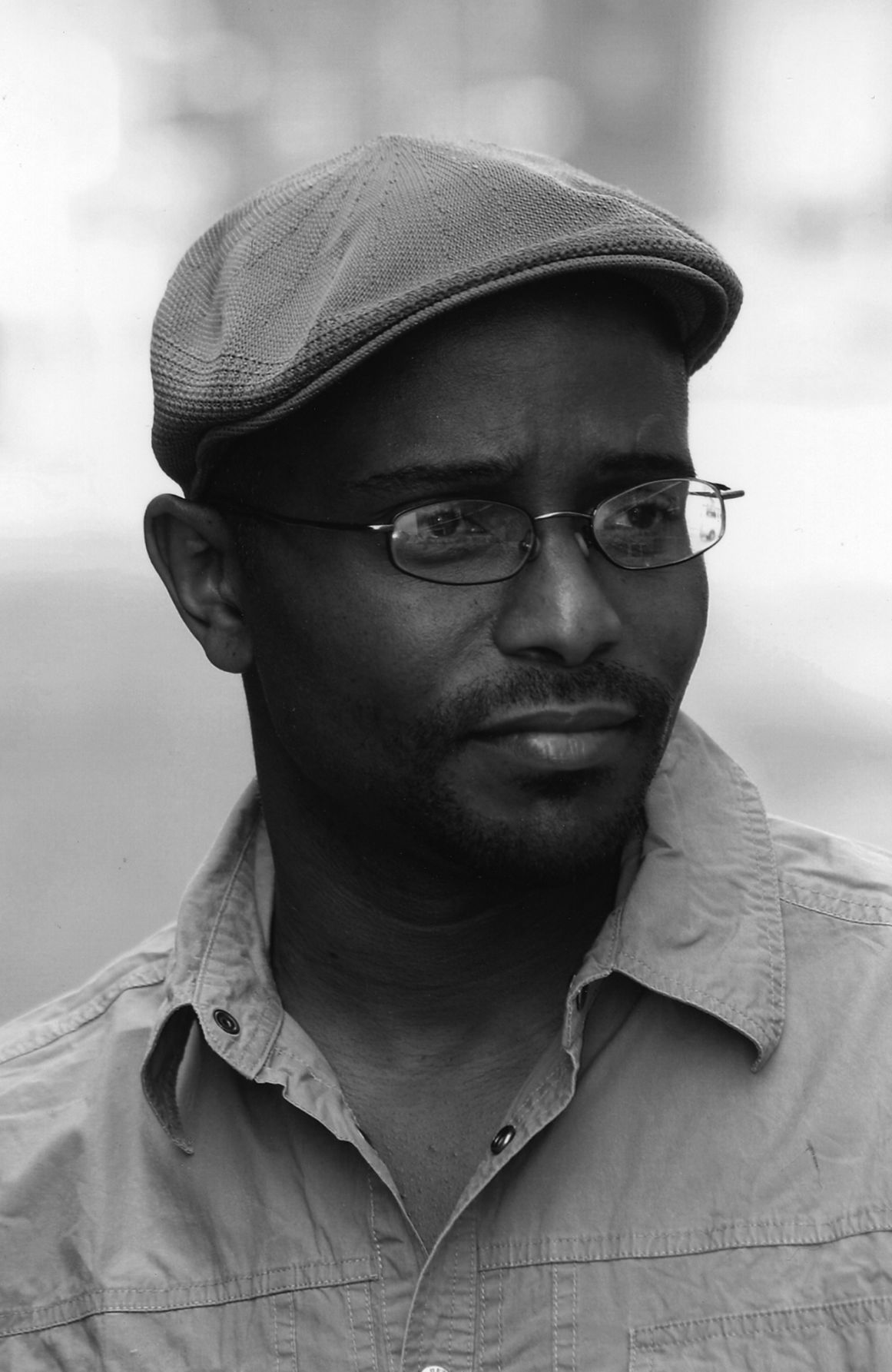 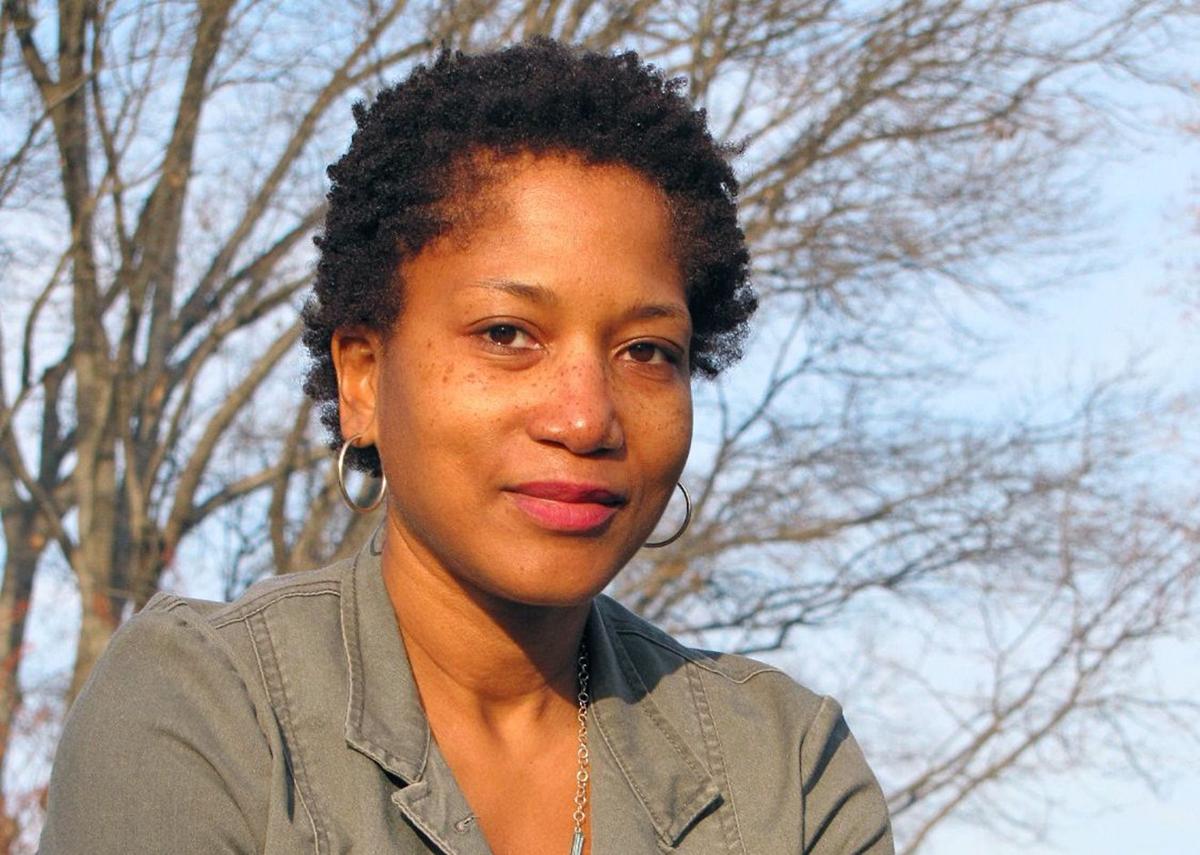 Pullout pages like this one (from Page 76) and creative typographical motifs bring words to life in Jess' Olio, photographed with permission from Tyehimba Jess and Wave Books 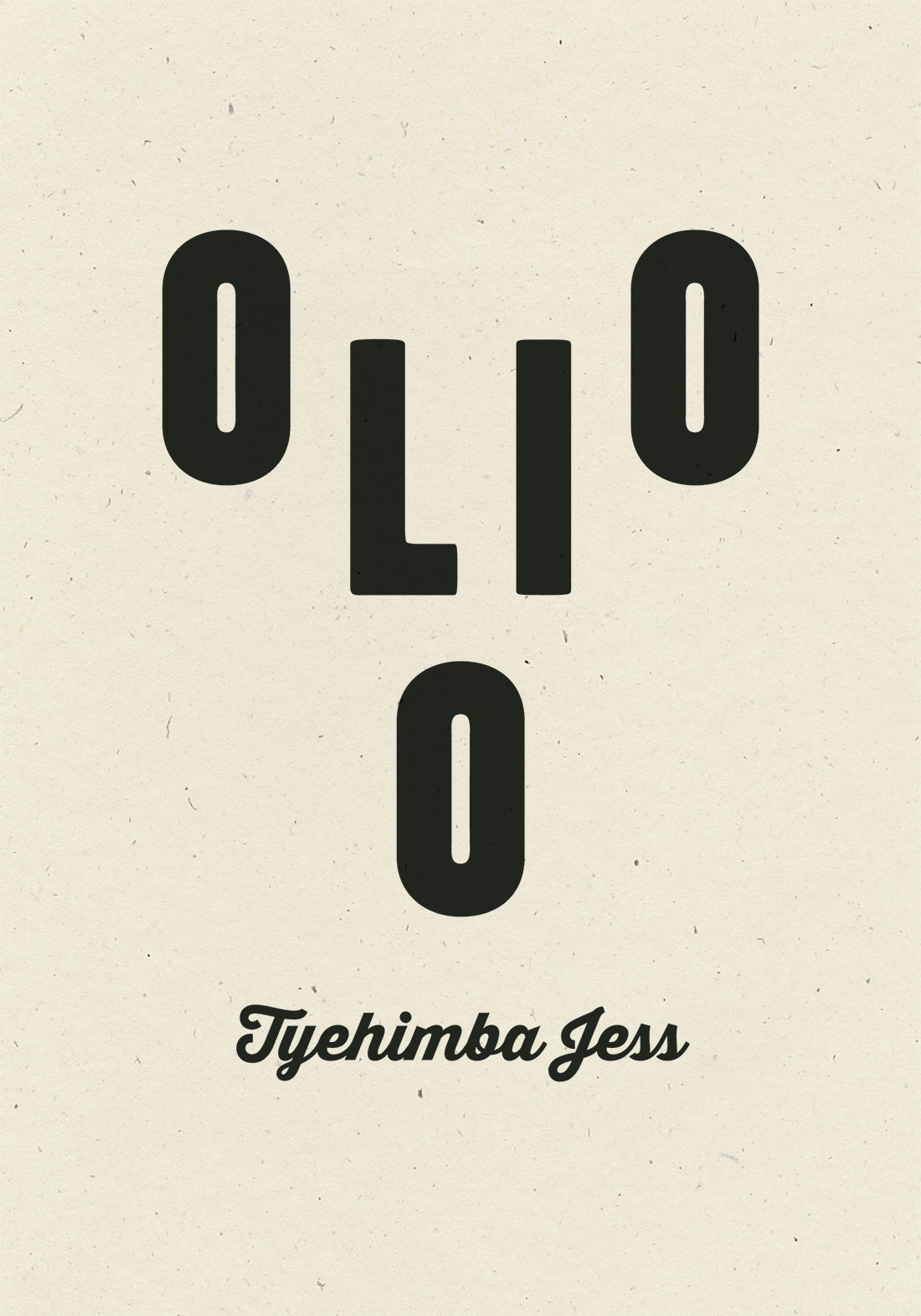 Olio, by Tyehimba Jess, is published by Wave Books 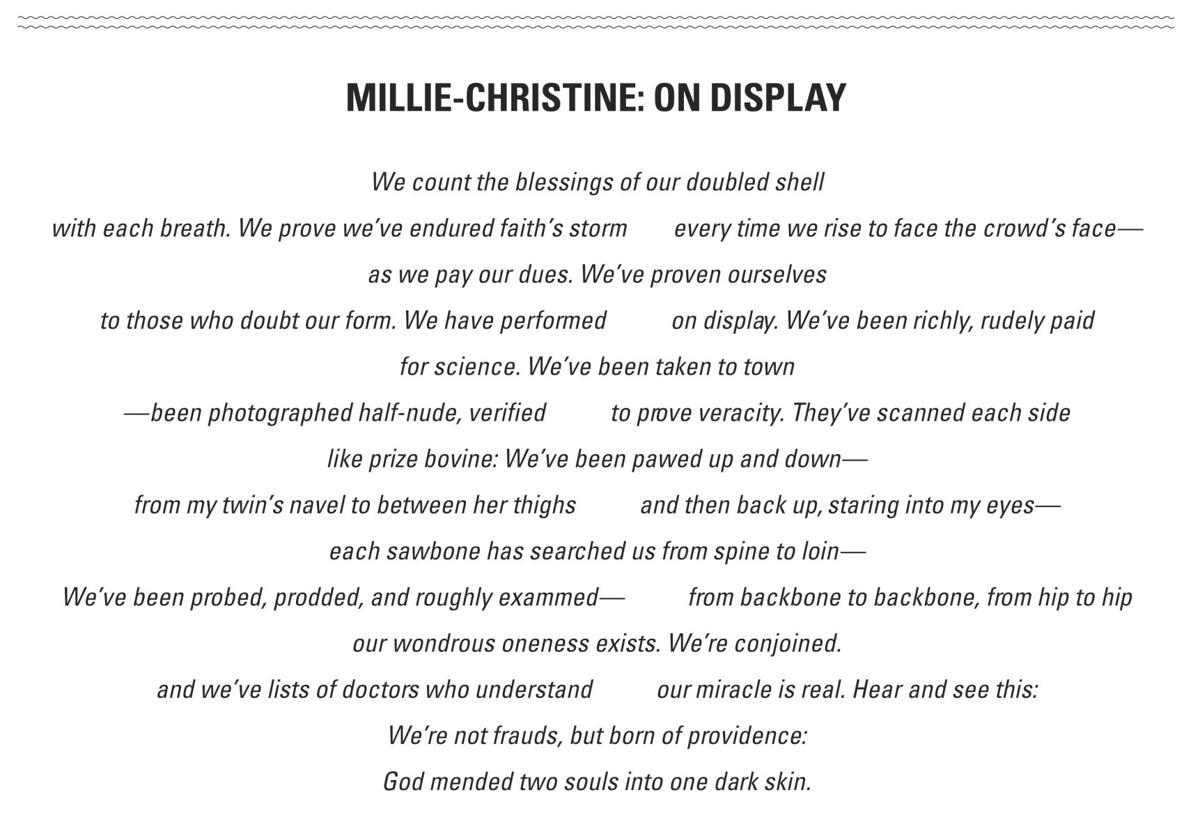 "Millie-Christine: On Display," from Olio. Reproduced from the original rendition with permission from Tyehimba Jess and Wave Books. Copyright © 2016

Pullout pages like this one (from Page 76) and creative typographical motifs bring words to life in Jess' Olio, photographed with permission from Tyehimba Jess and Wave Books

Olio, by Tyehimba Jess, is published by Wave Books

Millie and Christine McKoy were conjoined twins born into slavery in North Carolina in 1851. The girls shared a lower back and sacrum, and faced away from each other. They spent their childhoods on the sideshow circuit, undergoing regular physical examinations by doctors as they traveled from locale to locale. After the Civil War and Emancipation, Millie and Christine — or Millie-Christine, as they were also known — became so financially successful as internationally touring singers that they bought the plantation on which they were born.

The poet Tyehimba Jess wrote from their points of view in his Pulitzer Prize-winning collection, Olio (2016). Each of the five poems in the Millie-Christine series, which he calls “syncopated sonnets,” runs in two columns and merges on every other line.

“How can two entwined voices tell their stories? I was trying to have them share perspectives and then to come up with a different kind of angle on that same joint perspective,” Jess says.

“They thought of themselves as one and as two,” says Janice A. Lowe, the composer of Millie & Christine McKoy Sisters’ Syncopated Sonnets in Song, an adaptation of the poems into a song cycle that she and Jess have been working on for the past four years. The pair, along with artist and activist Yahdon Israel, recently received a $50,000 Creative Capital Award to complete the song cycle and adapt more of Olio into a musical theater piece.

With Lowe on piano and Jess acting as an interlocutor (or guide), two singers, a violist, and an electric bass player perform the McKoy Sisters’ Syncopated Sonnets in Song on Wednesday, Feb. 26, at the Lensic Performing Arts Center, as part of the Lannan Foundation’s Readings & Conversations Series. The group has performed short excerpts from the piece on three occasions, but this is the premiere of the full-length work. The 40-minute theatrical concert piece is followed by a discussion between the poet and the composer.

The song cycle is a complex collaboration between artists about two sisters whose existence was beset by challenges from the start — and whose performances were inherently collaborative, coming as they did from the minds and bodies of conjoined twins. The project reflects the layers and nuances of Olio itself, a book that defies easy description. The title refers to the second act of a minstrel show, which featured performances by individual singers, dancers, and musicians.

To call Olio a collection of poetry doesn’t hint at the feats of typography, printing, binding, and writerly vision that make the 235-page volume a history book, hymnal, puzzle, and Choose Your Own Adventure novel all at once. Jess wants readers to experience the book not just as a series of poems but as an actual olio.

“I wanted to write the story to be accessible, but I also wanted to provide a kind of engagement with the reader that would be out of the ordinary, that would cause them to explore the turns and reversals of the speakers’ lives,” he says.

Inside Olio are many lists, letters, songs, and drawings. There are names of black churches that readers may recognize were burned or attacked. Names of black lynching victims and reasons given for their brutal murders. Missives from an authorial alter ego seeking information from associates of the ragtime composer and musician Scott Joplin. A series of poems called Freedsong that’s a time-hopping mashup between the world-renowned escape artist Henry “Box” Brown and John Berryman’s racially insensitive 1969 poetry collection, The Dream Songs.

Those poems are "venturing into a critique of American poetry, talking about Berryman's use of minstrelsy up through the 1960s," Jess says. "It's a call and response between characters in the book, between timelines."

And there is still more to Olio. Some of its pages are meant to be torn out, rolled into a cylinder, and read in the round. In the book’s beginning, Jess includes a cast list of the real-life historical characters that drive the unconventional narrative, which is both a kaleidoscopic and telescopic view of the past. Among them are the writer Paul Laurence Dunbar, the pianist “Blind” Tom Wiggins, and the sculptor Edmonia Lewis. Because they were all plying their art in the same era, some of these people might have met, Jess says, but what unites them in his mind is that they were all successful black artists working in the years between the Civil War and World War I.

“They were the first generation of black artists to exercise their pursuit of artistic interests in a really meaningful and profitable way.”

As they began the song cycle, Lowe and Jess had conversations about what it must have felt like for Millie and Christine to live with the other’s circulatory system so close to her own — and to sing this way. “Conveying their complexity and the bigness of their musical lives, as well as their inner lives, is the challenge,” she says.

Millie and Christine were taken from their mother when they were 2 years old and then kidnapped and taken to to England when they were 3. It took three years for their mother and a trusted white male show promoter to locate them and bring them home to a country where they were still legally the show promoter’s property. Once they were freed from enslavement, the reality of being black women with prominent physical challenges in the late 19th century meant they still had to be very careful about whom they trusted and with whom they worked, Lowe says.

While American culture today values pioneering black entertainers, not everyone understands the harrowing historical stories of survival behind their art and performance, Lowe says. Too often — today, as well as in the past — art made by black creators isn’t valued for its intellectual intentions. She and Jess want the artists of Olio to be remembered for all of their facets and complexities, and how these men and women are part of a lineage that extends to the present.

“With the [song cycle], I feel I’m collaborating with Tyehimba the writer, Tyehimba the artist, the McKoy twins themselves, and the other characters in the book,” Lowe says. “I’m also collaborating with the singers who are embodying these characters onstage — who are themselves black performers who deal with some of the same issues that these late 19th- and early 20th-century performers dealt with. It’s a collaboration across three centuries.”

Tyehimba Jess with Janice A. Lowe

“I wanted to write the story to be accessible, but I also wanted to provide a kind of engagement with the reader that would be out of the ordinary.” — Tyehimba Jess