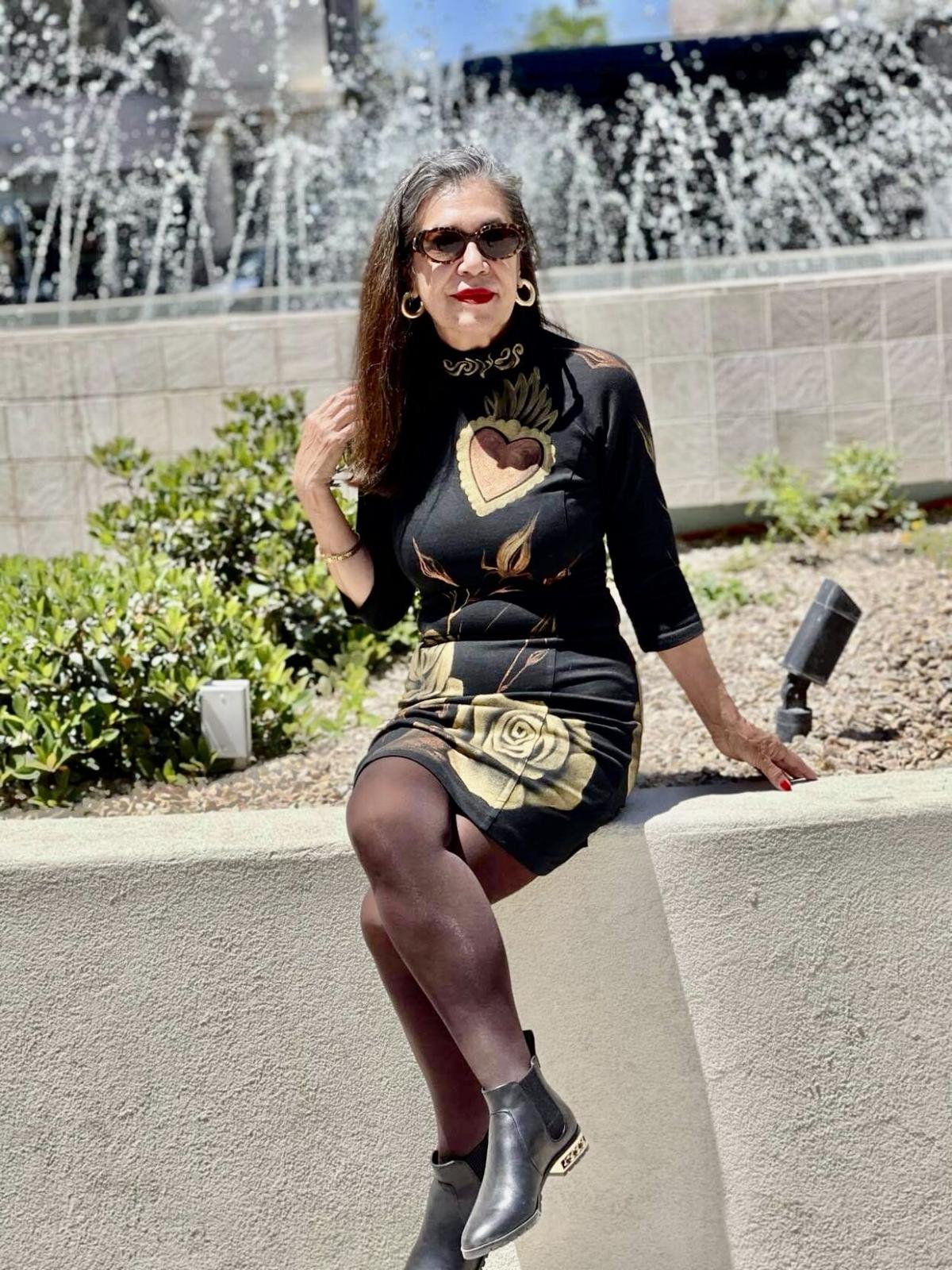 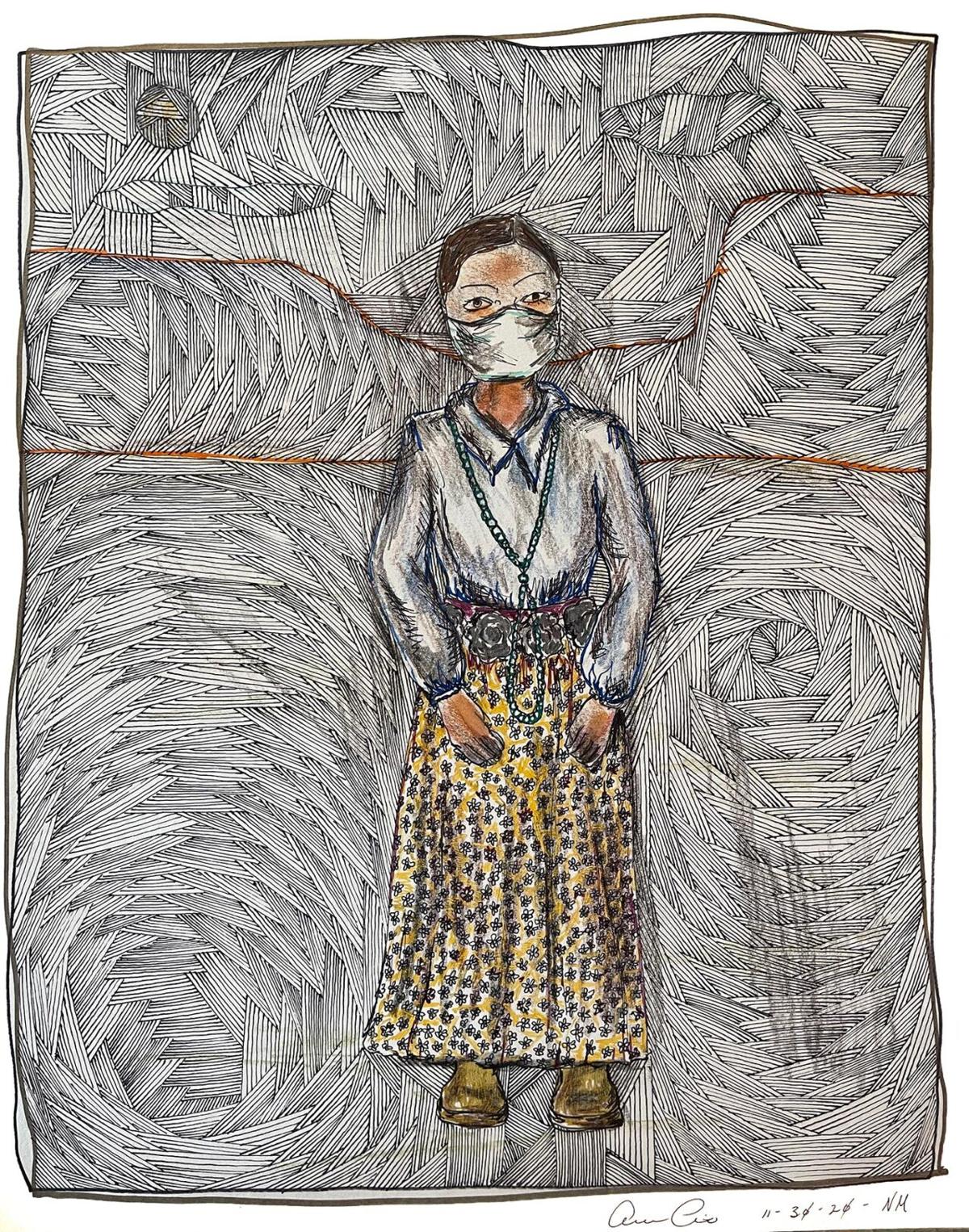 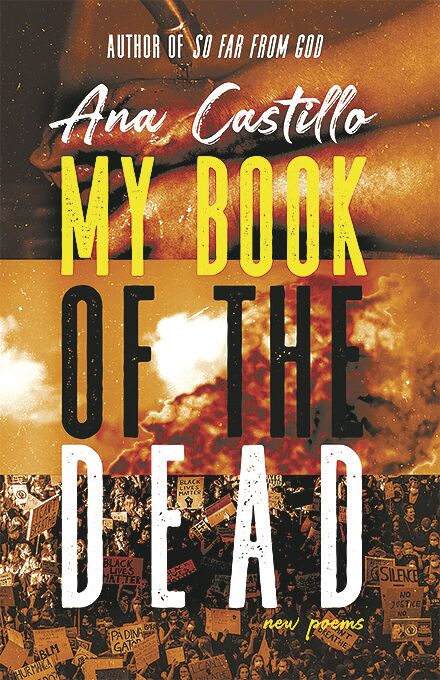 Ana Castillo sank into a deep depression at the end of 2016. The following year, trapped in a blanket of sadness, she decided she wasn’t going to write anymore. The celebrated poet and novelist turned to visual art instead, working every day on freehand pen-and-ink line drawings as a way to process the turmoil in her mind.

“There must have been poems in my head — albeit dark ones. They were just coming out as drawings,” she says. The meditative, creative outlet was enough to keep her mind active, to keep her from completely going under as she plodded through the weeks and months.

“At the end of 2018, on New Year’s Eve, I made a resolution that I had come too far to turn back, and I was going to get that book of poems together. I couldn’t write a novel. I couldn’t write non-fiction or essays, or at least I didn’t feel myself in the place to do so. But I could write one poem at a time.”

Years earlier, in 2012, Castillo had embarked on a new collection of poetry. She thought it would take her a full decade to finish the book, but she didn’t know she’d be derailed by her own mental health. She stayed committed. Despite not writing for almost two years, she completed My Book of the Dead in 2020, ahead of her self-imposed schedule. It was published in September by High Road Books, an imprint of University of New Mexico Press. Throughout the book are the densely rendered line drawings: a woman wearing a protective mask, an Indigenous woman leaning on a cane, a skeleton in a flowered hat, dancing among flames and fish bones.

Her crisis of faith is behind her now. “I’m back, baby,” she says. “I’m taking projects out of the bottom drawer. I have to finish what I started, which is to use my love of writing as part of my voice in activism.”

Castillo lives in the middle of nowhere, between Las Cruces and El Paso, Texas. Her homestead is surrounded by desert, with mountains in the distance. She is known as an intrepid explorer of feminism, sexuality, and gender in her writing, often through the lens of her Latina and Indigenous identities. Her books of poetry include The Invitation (1979) and Women Are Not Roses (1984). The Mixquiahuala Letters (1986), So Far From God (1993), Watercolor Women, Opaque Men: A Novel in Verse (2005), and Give It to Me (2014) are some of her novels. Her non-fiction includes many essays, as well as the collection Massacre of the Dreamers: Essays on Xicanisma (1994).

In her writing, Castillo often mixes Spanish liberally with English, which she says is an ongoing political choice to show how languages merge and change as populations migrate. She is considered innovative and experimental, writing in narratively driven fragments without much exposition. But her work isn’t easy to categorize. She doesn’t do just one thing. My Book of the Dead includes poems written in persona, poems with unusual line breaks, and standard free verse. One poem tallies the victims of mass shootings over the years. Although the collection is well-timed for a readership suffering from pandemic fatigue, and it contains poems about COVID-19, she says the themes and book title are mostly coincidence. Everyone she knew was suffering long before the virus ravaged the world.

‘Maybe I am all things’

Castillo came of age in Chicago in the 1970s, when “Latino” and “Latina” were the labels of choice for writers and artists of Mexican background, she says. And she lived in California in the 1980s when “Chicano” and “Chicana” became popular, which she embraced as well. When she moved to New Mexico in the 1990s, she found “Hispanic” was the term that locals preferred. That, too, was fine with her. Now, a new generation is coining gender-inclusive terminology — and taking an interest in her work.

A scholarly reader was published in June by the University of Pittsburgh Press, Transnational Chicanx Perspectives on Ana Castillo, edited by Bernadine Hernández and Karen Roybal. While some people her age are troubled or confused by such gender-neutral words as “Latinx” and “Chicanx,” Castillo says she doesn’t think it’s her role to stand in the way of young people describing themselves, and she isn’t afraid of her own fluid identity.

“I just read a review of My Book of the Dead by a [critic who said] the problem with my work is that people don’t know how to label me. Am I this? Am I that? Is she a poet or a novelist? Is she Indian? Is she Mexican? I used to be a lesbian, but now I’m with a man,” she says, paraphrasing the review. “I love what he concluded, which is that I am not one thing and then another. What he said is that maybe I am all things, all time.”

“My Book of the Dead is, as the title suggests, a meditation on mortality, but not only the lifespan of human beings but of the Earth itself. Death looms over all life, a fact that manifests itself in these poems as a call to action,” Donald G. Evans writes in the New City Lit review that Castillo appreciated.

Seven of the 41 poems in My Book of the Dead are presented bilingually, side by side. Castillo wrote them in Spanish and then translated them into English. Because translation is a creative process in which the translator makes decisions about tone, nuance, and cultural meaning, Castillo didn’t initially trust herself not to rewrite her own poems. She thought she needed distance, so she sought help from other poets. One of them was Tyehimba Jess, who wrote leadbelly (2005) and the Pulitzer Prize-winning Olio (2016). He told Castillo that he was studying Spanish and wanted to try translation. He worked on “Gotas caían en el techo” (“Drops Fell on the Roof”), a series of gently rhyming couplets about the 2018 massacre at Marjory Stoneman Douglas High School in Parkland, Florida.

A stab / in the chest of the country

and the night didn’t blink / that Valentine’s Day.

“Ana Castillo is a poet who shaped my understanding of the boundlessness of poetry,” Jess says, describing her writing as fearless and graceful. “It was an honor to translate a poem for her, to inhabit her lingual landscape — and emerge on the other side with another lesson from her pages.”

Ultimately, however, Castillo couldn’t help but tweak most of the poets’ translations, putting her own polish on their efforts. “Every project is different, and you learn from every project. What I learned here was that I’m not afraid to translate my own work,” she says.

The title poem is the last poem in the book. It’s nearly seven pages, divided into 10 sections. Castillo weaves all of the book’s themes into it — power, politics, race, religion, art, and violence both literal and spiritual. “When the best, which is to say, the worst/rose from the swamp,/elected to lead the nation — /I presumed my death was imminent,” she writes.

Eyes and ears absorbed / from the media what / shouldn’t have been.

Perhaps I’d only woken to a bad dream,

or died and this was, in fact, / Purgatory —

“I don’t have a clear memory of when I initially started the poem. I just remember working on it,” she says. “I reference afterlife accounts of the people that we know as the Aztecs, about the journey after death to meet the gods. Today, we have this tendency to say, ‘poor so and so, but I know they’re in heaven looking down on us now.’ I don’t know which religion actually says that happens automatically, but Indigenous people are pretty hardcore. After death, you still have to prove yourself. Everybody goes through a series of nine hells.

“In this poem, I’m sent back by the gods, who say ‘not so fast, you’ve got some more work to do.’ Instead of going on to paradise forever, I’m returned to a sea shore, to my family who is waiting for me. The book offers some hope, some consolation, after our journey through the many hells that we have been through.”

Once upon a time

I was told not to take up much space.

I ran in the bathroom with no lock.

Standing on the toilet seat I stared.

My reddened face looked back.

Everything in the flat was worn out.

(In a few years the house would come down,

our stories of arrival, learning English,

bringing our lamb on a rack,

tacos, and sweat to factories and steel mills,

the obscured child in the mirror,

with disheveled hair and decalcified teeth,

snot running to her upper lip,

I stare in a mirror

in a public restroom.

Someone takes it for fascination.

“What an arrogant chick,” the stranger

From My Book of the Dead: New Poems by Ana Castillo. Excerpt courtesy of High Road Books, an imprint of the University of New Mexico Press.