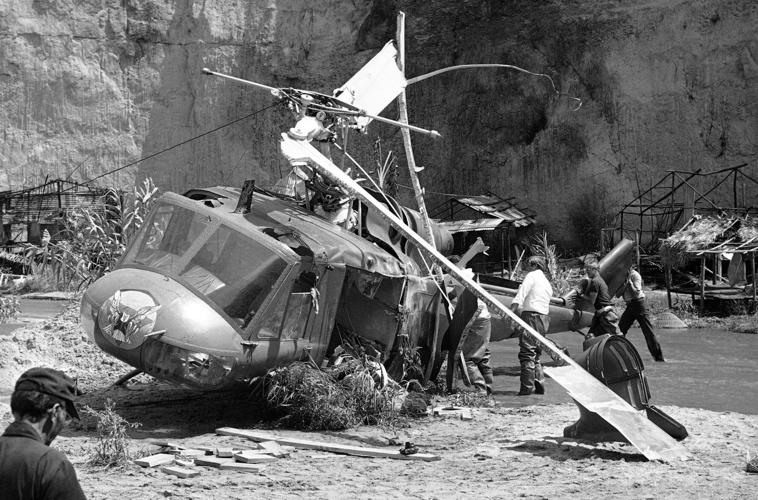 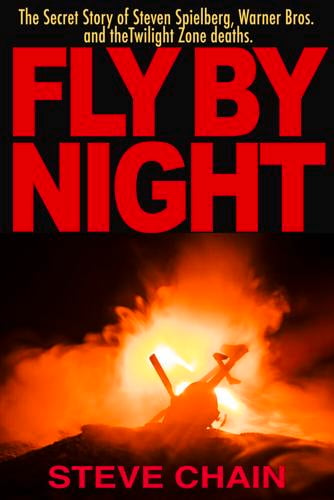 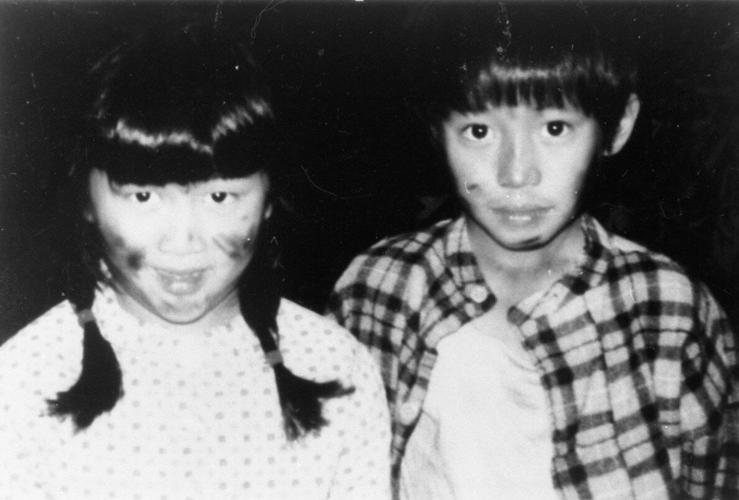 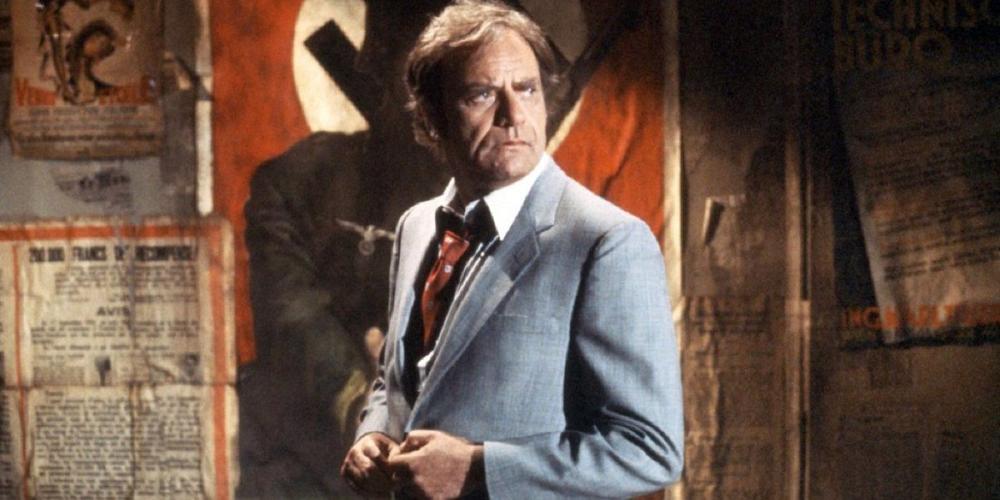 Vic Morrow in the “Time Out” segment of Twilight Zone: The Movie

They hid the children in the director’s trailer, just in case fire safety and welfare officers should discover them on set during the filming of Twilight Zone: The Movie (1983). It was July 1982, and the film crew, led by director John Landis (National Lampoon’s Animal House, An American Werewolf in London) were location shooting at night, filming a critical scene in the segment “Time Out” in which actor Vic Morrow (Dirty Mary Crazy Larry, The Bad News Bears) was protecting two Vietnamese children in a scene set during the Vietnam war, carrying them across a river under the spotlight of a searching U.S. helicopter.

Child labor laws in California prevent children from working on movie sets at night. When the casting agency learned that the production was seeking two actors to play the kids, and the details of the scenes they’d be shooting, it declined to work with the production, forcing Landis and associate producer George Folsey Jr. to hire the children (first-time actors Myca Dinh Le, 7, and Renee Shin-Yi Chen, 6) under the table, or, as author Steven Chain writes in his new book Fly By Night: The Secret Story of Steven Spielberg, Warner Bros., and the Twilight Zone Deaths (TrineDay, 480 pages, $29.95), “illegally.”

And this may never have come to light were it not for an on-site accident that resulted in the deaths of Morrow and Dinh Le, who were decapitated, and Shin-Yi Chen, who was crushed when an explosion on the set sent the helicopter careening into the water. The probable cause of the accident was the detonation of special effects explosions too close to the low-flying helicopter, which propelled a foreign object into it, damaging a rotor blade.

Fly By Night, which takes its name from the words painted on the nose of the helicopter (subsequently removed after the crash), takes a fresh look at a decades-old case, in which some of Hollywood’s elite are implicated in a cover-up: a $5-million-dollar scheme to protect Landis and keep co-producer Spielberg’s name out of the headlines.

Landis’ criminal defense attorney, Harland Braun, provided this tantalizing quote for the book’s cover: “A tour through a sewer in a glass-bottomed boat.”

“When Harland worked for the DA, he prosecuted some of the [Charles] Manson cases,” says Chain, 70, a part-time resident of Santa Fe and Los Angeles. “He’s seen it all. He’s 81, and he’s still practicing. He’s still in the headlines as a criminal defense attorney.”

Chain, who attended the trial every day out of concern for what happened to the children, has been involved in many aspects of the publishing business over the course of his career, from working in the mail room to serving as publisher. A former journalist at Ramparts, a San Francisco-based political and literary magazine published from 1962 to 1975, Chain went on to work with editor Warren Hinckle and author Hunter S. Thompson at Scanlan’s Monthly, the magazine credited with being the birthplace of Thompson’s gonzo journalism. Chain’s interest in the case began with the children, and, he says, a fascination with the public response to high-profile Hollywood elite. But the manuscript he started in the 1980s was set aside for decades. His interest was renewed when a Hollywood producer asked to see it and convinced the author to get it published.

“Many of the people in this story are still very active and prominent in their fields,” Chain says of players in Fly By Night. And, indeed, the case threatened the careers of not only Landis, who managed to direct several A-list productions in the years following the Twilight Zone incident, but Spielberg, executive producer Frank Marshall, and associate producer Kathleen Kennedy. The last three names are known in Hollywood as a tight-knit group, but Spielberg reportedly ended his friendship with Landis over the incident.

The details of the deaths on the set are grisly. The book contains graphic photos of the bodies after death.

“On several occasions, the prosecutor [Deputy District Attorney Lea Purwin D’Agostino] would use these pictures to inject emotion into people she was trying to persuade to participate in the case,” Chain says.

The trial lasted nine months, beginning in late 1986 and going through the first half of 1987. Despite evidence of negligence on set regarding safety measures, not to mention the illegal hiring of the children, Landis was acquitted.

“I saw John Landis as a character, a freaky reiteration of Groucho Marx,” says Chain, who was not able to speak with the director. “He was a very young and successful director. I interviewed many of the witnesses. I got very close with some of the lawyers and investigators on the case. I compiled most of a manuscript way back then.”

Landis was the principal defendant. He was the only one of the four studio people to testify.

“One of the defense arguments was going to be that all these other people knew about what was going on, and no one perceived it as dangerous. As you know, these things [compliance with child labor laws] are, ordinarily, under pretty good supervision by studio leaders.”

In the end, Spielberg’s career was saved. In fact, the trial seems not to have affected his work as a director in any way. He helmed at least three major productions in the five years that followed the incident, including Indiana Jones and the Temple of Doom (1984) and The Color Purple (1985).

“The studio had to prevail on this case and avoid any kind of entanglement, because their licenses would have been revoked had they been found culpable,” Chain says. “So they took such an active role in interfering with witnesses who were cooperating with the police.”

Witness interference, some in the form of quid pro quos, — a box of goodies from a Malibu bakery in exchange for flattering testimony, for instance — are detailed in the book.

And what of Marshall, who was on set the night of the incident?

“Here’s a guy running a set, with two people decapitated and a third who died from other causes. And he leaves the set. That was Frank Marshall.”

Chain says he obtained documents from Warner Bros. showing Marshall was interviewed in a meeting at Warner Bros. Studio with the top criminal lawyers in L.A., the top civil lawyers in L.A., and the top brass from Warner. In his testimony, Chain says, he was sketchy about his knowledge of the kids on set. “But there was enough that, had the information been released, it would be very damaging to the whole Spielberg enterprise.”

In the aftermath, Warner Bros. established better safety standards for every aspect of film production. The Directors Guild of America established stricter disciplinary measures for violations of safety procedures by members, and the Screen Actors Guild opened a 24-hour hotline for its members to report unsafe conditions.

Still, tighter safety standards did not prevent deaths on film sets. As recently as last year, cinematographer Halyna Hutchins was killed on the set of the movie Rust, which was filming in New Mexico, when a live round was fired by actor Alec Baldwin from what was supposed to be an unloaded gun.

In the Rust case, Alec Baldwin and the director are likely in the hot seat, because both may have seen rules being broken, Chain says. “Picture the scene. Baldwin’s inside the church. The gun is outside on the cart. The armorer is 24 years old. It’s the second movie she’s ever done. Anyway, she’s in the bathroom. [First assistant director] Dave Halls is outside with the cart. He supposedly hands the gun to Alec Baldwin. But who told him to get the gun? No one’s asked that question. The union steward on the set told me that when they first issued the search warrant, they never searched the ammunition truck until three days after the incident.”

Rust producers face a $137,000 state fine for workplace violations, and Baldwin, along with more than two dozen individuals and businesses connected to the production, are named as defendants in a wrongful-death lawsuit filed by Hutchins’ family.

Chain believes that any kind of indictment related to the accident could ultimately fall on Baldwin, who is the film’s lead as well as its executive producer, and director Joel Souza.

“In the hierarchy of movie production, the director is the ultimate authority. But, knowing power and the way things really operate, Alec Baldwin was [probably] in charge of everything in that room,” Chain says. “One of the things your district attorney in New Mexico is looking for are functions he performed in the production of Rust that would show that he was aware of cost-cutting maneuvers that increased risks.”

When a production conflates job duties in an effort to save money, it can result in mishaps and a tangled web of culpability when mishaps result in death. And money-saving measures is a component in both cases.

“One of the things in cost cutting is having people on the set wear too many hats,” Chain says. ◀