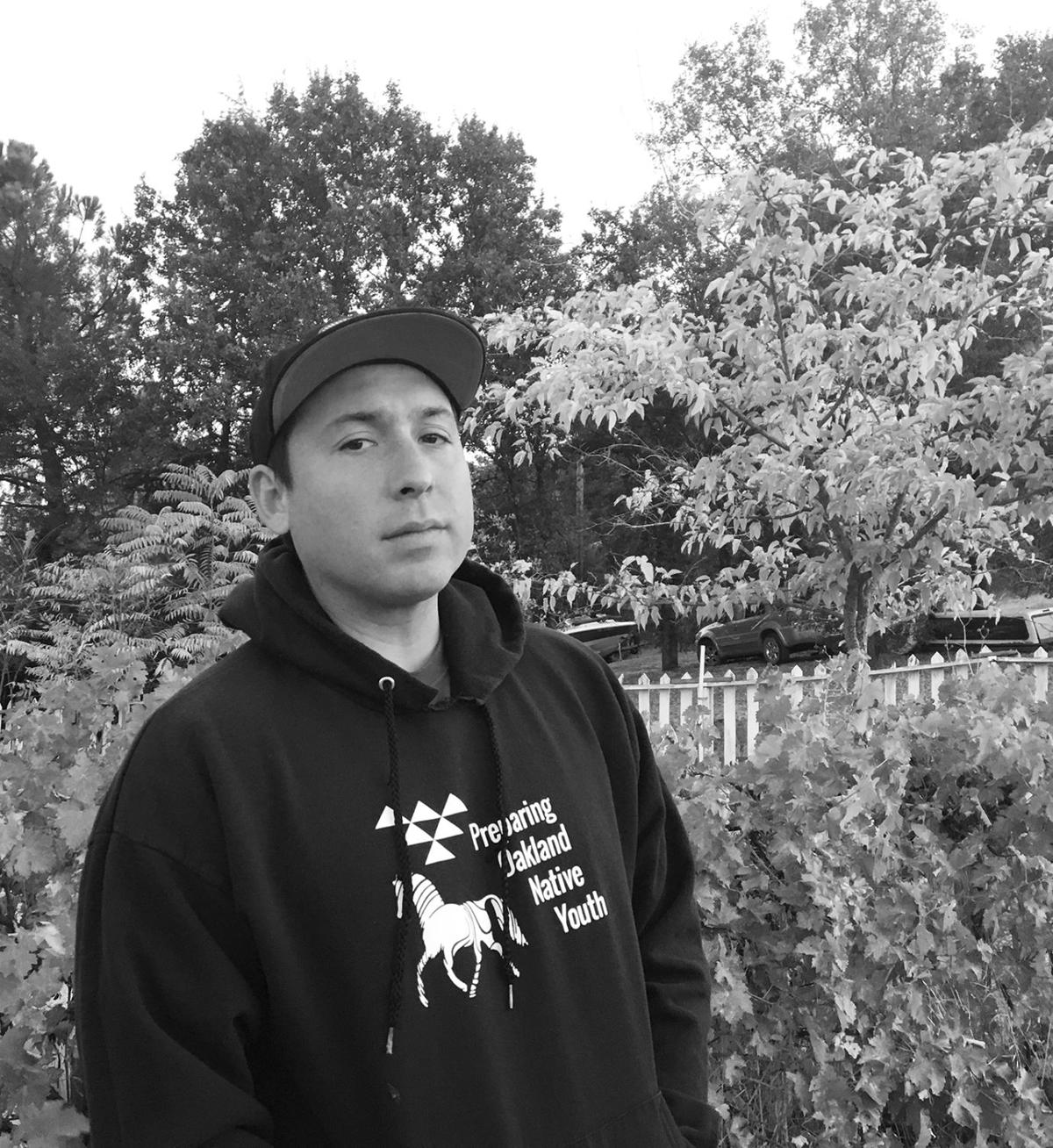 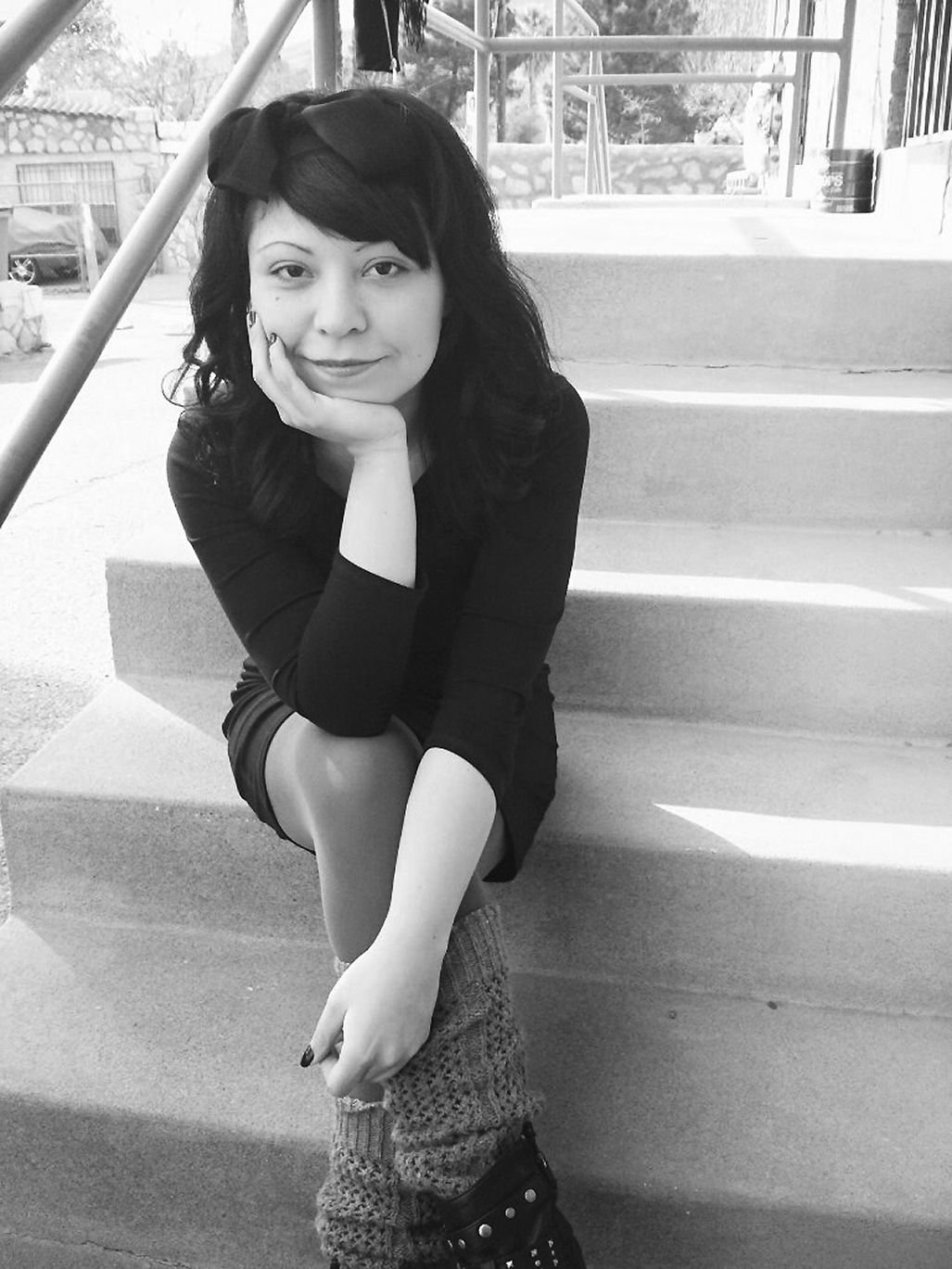 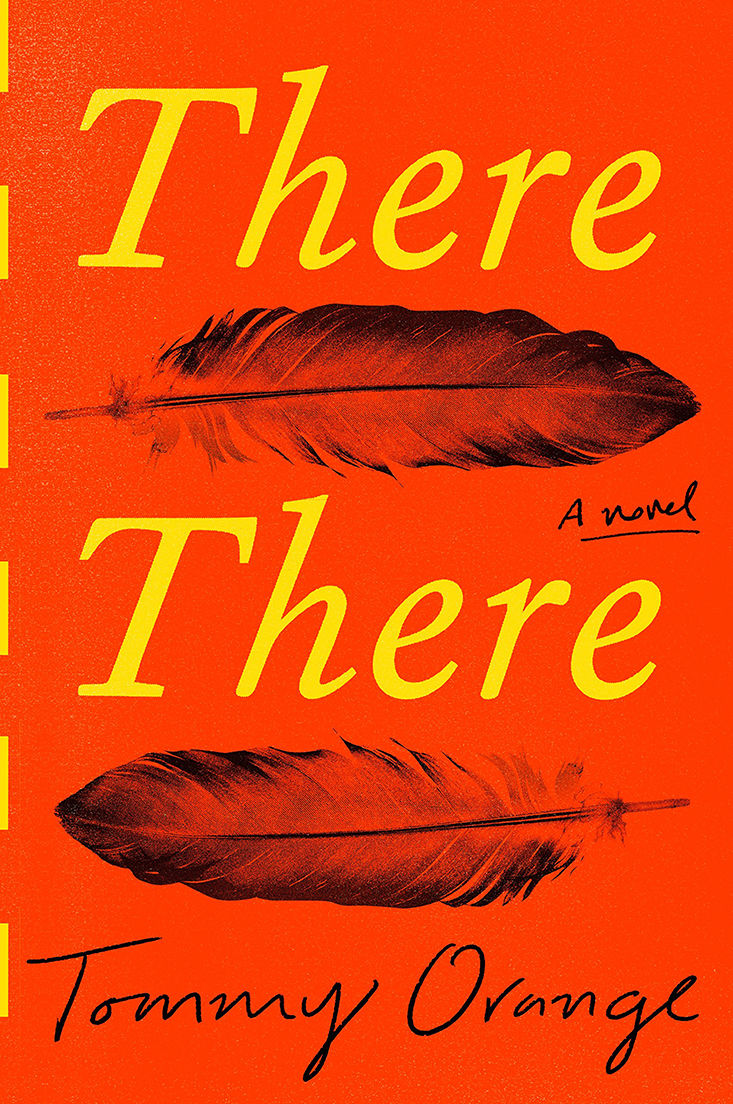 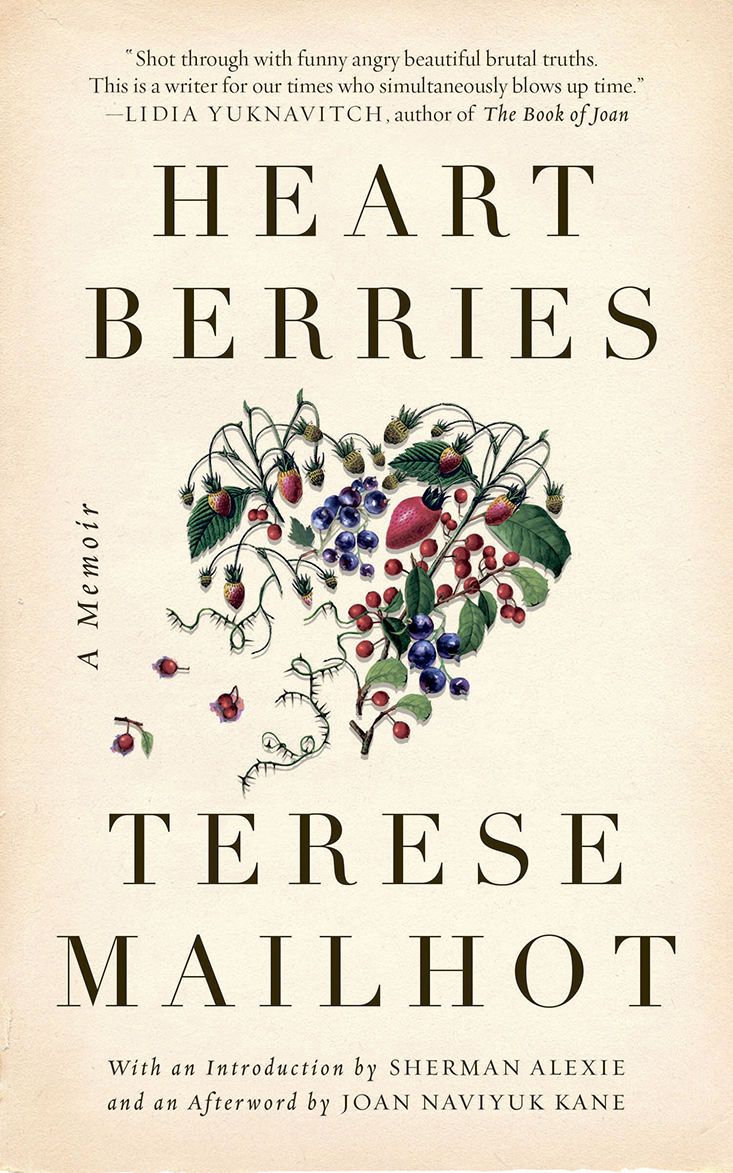 Tommy Orange became an avid reader when he was twenty-four. He was working in a used bookstore outside of Oakland, California, and — in the name of “reorganizing” the stock — he got to wander the stacks and read all he wanted while he was on the clock. Though he’d always scribbled thoughts and lines on the backs of notebooks, he didn’t consider himself a writer at the time, but eventually he realized he loved to write as much as he loved to read. As an aspiring author, he joined casual writing groups in search of feedback on his work. He applied for a residency at the prestigious MacDowell Colony in New Hampshire on a whim and got in. When he mentioned this to another writer he knew, she immediately began looking into master of fine arts in creative writing programs on his behalf.

“She knew getting into MacDowell had some cachet, and she got excited about my possible career,” Orange said. “I was resistant to doing an MFA — using the logic that before MFAs, we had plenty of writers. But then she found IAIA, a low-residency program that I could afford and didn’t have to move to Santa Fe to attend, and it was a Native program. I didn’t want to do an MFA just for the sake of it, but this was different.”

Orange (Cheyenne and Arapaho) graduated from the Institute of American Indian Arts’ Low Residency in Creative Writing program in 2015. His first novel, There, There, is forthcoming from Alfred A. Knopf in June 2018. From Saturday, Jan. 6, to Saturday, Jan. 13, Orange will be in residence for the winter session at IAIA — now as a member of the faculty. He reads from There, There on Jan. 13, joined by Kimberly Blaeser (Apprenticed to Justice, 2007) and Justin Torres (We the Animals, 2011), in the final public reading of the week.

Orange is one of two 2015 graduates in the program with books coming out in 2018 who recently joined the IAIA faculty. In February, Counterpoint Press releases Terese Mailhot’s memoir Heart Berries, which is included in Elle magazine’s list of “19 of the Best Books to Read This Winter” and Huffington Post’s “60 Books We Can’t Wait to Read in 2018.” Mailhot reads from her work at IAIA on Wednesday, Jan. 10, with Joan Naviyuk Kane (Milk Black Carbon, University of Pittsburgh Press, 2017) and Derek Palacio (The Mortifications, Tim Duggan Books, 2016).

Mailhot (Seabird Island Band) described herself as timid in her first months as a graduate student — but then Sherman Alexie, a giant of Native literature, told her that she was just a couple of swings away from the big leagues. “I had no idea what that meant because I didn’t understand sports metaphors. But he was the first one to take me seriously, to say, ‘You have it.’ Now this is all really happening and it’s one of the craziest experiences in my life.”

Alexie was involved in founding the Low Residency MFA in Creative Writing program — referred to affectionately as “Low Rez” by students and faculty — in 2013 with Jon Davis, a longtime creative writing professor at IAIA and former Santa Fe poet laureate. Alexie taught in the program for several years and wrote the introduction to Heart Berries. Kane, an Iñupiaq poet who teaches in the program, wrote the afterword — an illuminating craft talk with Mailhot formatted as a Q&A-style interview. Mailhot writes for the online publication Indian Country Today Media Network and is an editor for The Rumpus, and she was recently named a Tecumseh Postdoctoral Fellow at Purdue University. Her success is long fought for and hard won, chronicled in exquisite and sometimes excruciating detail in her deceptively raw, voice-driven memoir. Mailhot works language like a poet and lets memory and time twist around to elicit from herself deeper truths about childhood trauma, mental illness, Native identity, love, romance, and motherhood, among other topics.

“Rhetorically, it mattered that I present the truth, but sometimes you can’t tell a story in a linear way. For instance, in order for people to understand how I interact with my children, they have to understand that I’ve lost access to one of my children, and that’s always present. I’m constantly thinking of Isadore as I’m holding Isaiah or Casey Jr.,” Mailhot said.

The book’s prose often addresses a “you,” which is sometimes an epistolary device as Mailhot writes to her boyfriend, Casey, from a mental health facility. Other times, the “you” is aimed at the judicial system, the white power structure, her mother, herself, or the reader. “The ‘you’ slowly turns into all culprits of my pain. Sometimes I’m as lost as the reader is as to who the book is really for. Is it for me, or is it for the reader’s experience, or is it for my mother, or is it for Casey? You should go crazy in the book. I go crazy in the book.”

Orange’s There, There, set in Oakland, is told from multiple points of view. A dozen characters ultimately come together when a violent crime is committed at a powwow. Orange began working on the story in 2010, inspired by his job at a Native health facility and running storytelling and video workshops that used artistic mediums as a means for personal healing and growth. Among the main characters are a kid with fetal alcohol syndrome, a little girl talking to her teddy bear, an organizer of the powwow, and a guy involved in a plot to rob the powwow of cash, large amounts of which are kept on hand to award as prizes to dancers. Parts of the narrative take place during the Occupation of Alcatraz Island, which lasted from fall of 1969 to summer of 1971, led by the Native American civil rights group Indians of All Tribes.

“I noticed a pretty marked lack of Oakland stories and Native stories in general, and a lack of urban Indian stories in literature and movies,” Orange said. “I decided I wanted to write a novel that was polyphonic, made up of people who were kind of voiceless. The chapters braid together like a traditional novel, though, with that cohesive quality. They’re not linked stories calling themselves a novel.”

Indian identity figures in There, There and Heart Berries, but it’s not the primary thrust of either narrative. A trend in contemporary Native literature is to treat being Indian as context that may or may not be critical to the reader, depending on the story and what the author wants. At IAIA, the emphasis is on craft, not content, and students are not expected to imbue their writing with history lessons for white audiences or function as a cultural relic.

“At IAIA, there isn’t an expectation that people are writing from an Indian identity crisis. They don’t let you cheapen yourself by being reductive,” Mailhot said. “A lot of MFA programs focus on you being a Native writing about a Native person’s experience. And while that’s part of why we write, we also want our craft to be looked at. In my undergraduate experience, my peers thought my immediacy and my lack of flowery language meant I wasn’t sophisticated, that I was limiting myself by not describing the setting. But I was intentionally doing that because I love Raymond Carver.”

“I didn’t have any other workshop experience, so in a way I felt spoiled by it. It was so supportive,” Orange said, adding that he’d like to see a Native writing renaissance along the lines of the 1970s and 1990s, when such writers as Alexie, N. Scott Momaday, and Leslie Marmon Silko came to prominence.

Orange, still in the throes of the life-changing excitement of publishing his first book, has perhaps not yet realized that he and Mailhot are leading the way.

I decided I wanted to write a novel that was polyphonic, made up of people who were kind of voiceless. — Tommy Orange

The Institute of American Indian Arts’ Low Residency MFA in Creative Writing progam meets in weeklong winter and summer sessions each year. Students then correspond with a faculty member about their writing during the course of the semester. The winter session includes writing workshops and craft talks for students, as well as nightly public readings by faculty and visiting writers in poetry, fiction, nonfiction, and screenwriting.

All readings are at 6 p.m. in the auditorium in the Library and Technology Center at IAIA (83 Avan Nu Po Road). Admission is free. For more information, visit www.iaia.edu/happenings or call 505-424-2325.

Pam Houston (Contents May Have Shifted, 2012)