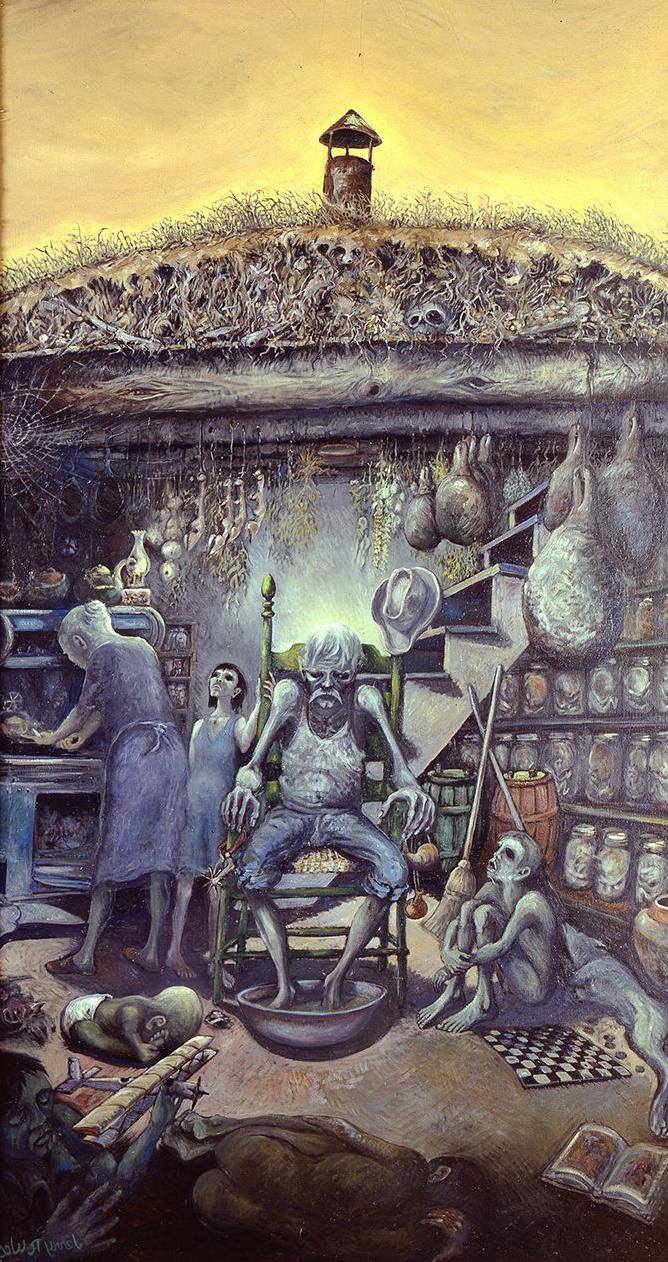 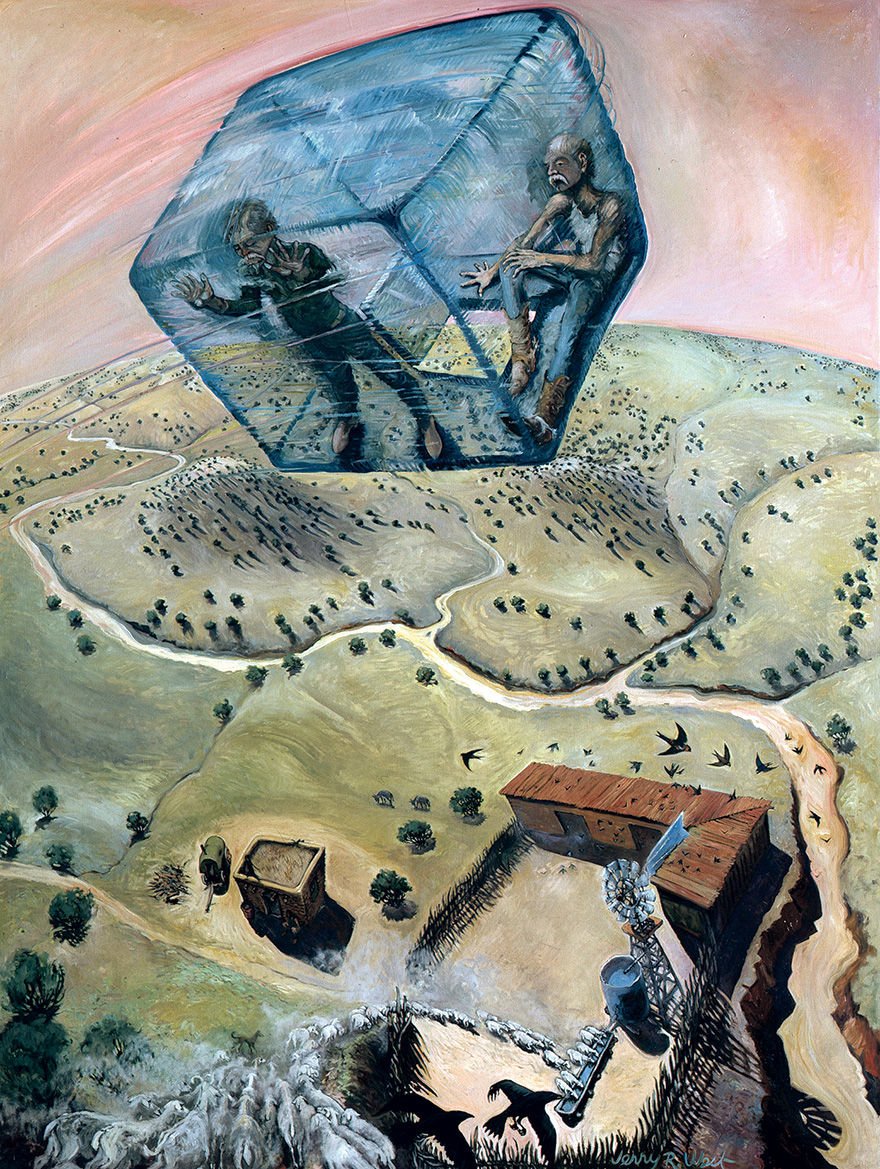 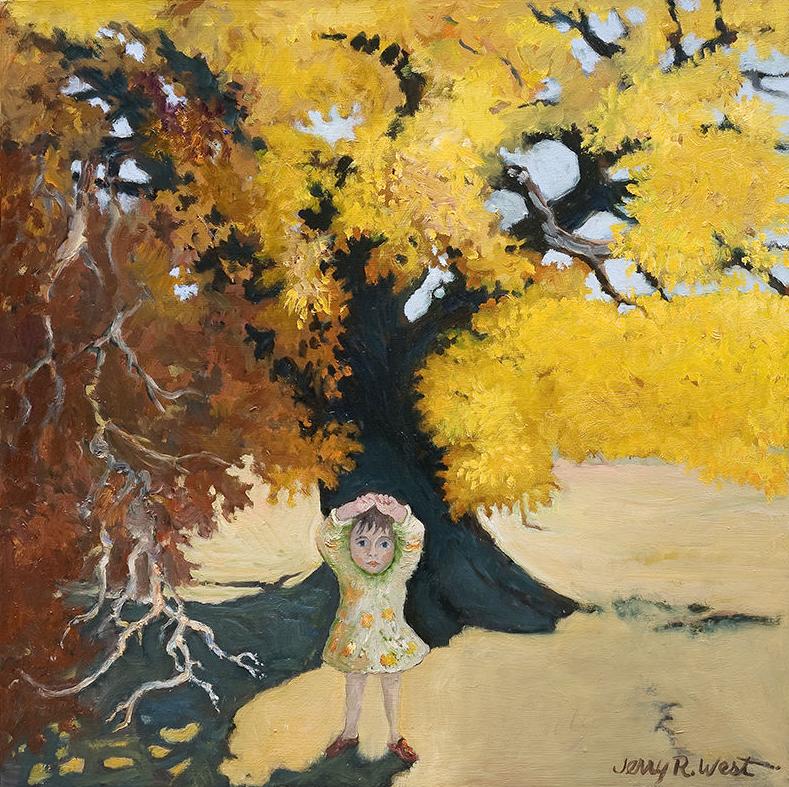 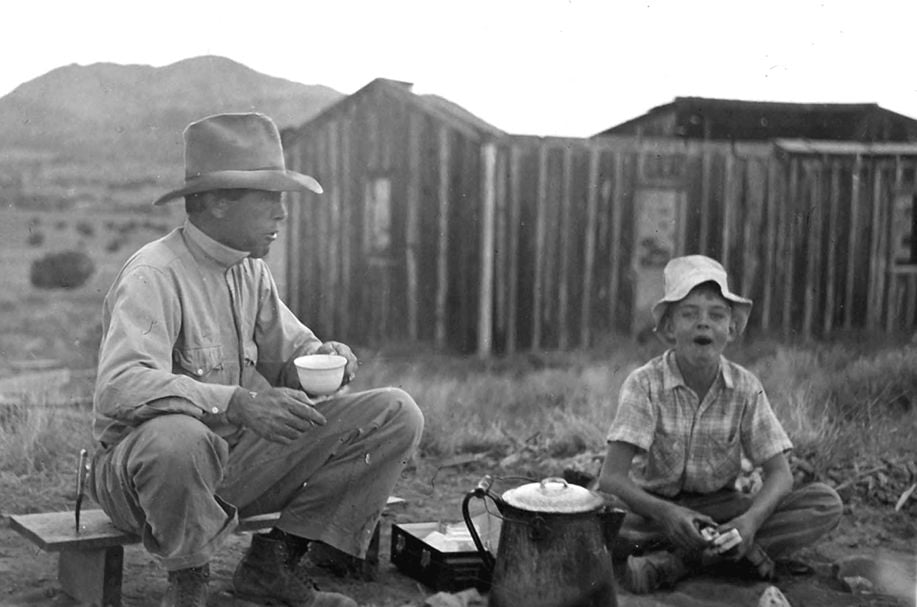 In the opening essay of the new monograph Jerry West: The Alchemy of Memory — A Selective Retrospective, contributing author MaLin Wilson-Powell writes that West, although he was born in 1933, was raised in a New Mexico that had not entered the 20th century in many ways. In some corners of the art world, romantic depictions of the “wild West” predominated. Some artists in Santa Fe were still producing 19th-century-style paintings, while modernists were beginning to explore abstraction. But West’s compositions lie somewhere in between the romanticized past and the realities of the present; his paintings conflate these subjects. West’s body of work is at once “Western” in its depictions of the desert Southwest and its old homesteads, ranches, and Spanish missionaries and surreal in his treatment of the figures who inhabit the landscape. In his works, place becomes a psychic terrain where dream narratives play out. “I am a storyteller,” West told Pasatiempo. “I’m certainly connected to this world, and I kept coming back here even though I’ve traveled. New Mexico was always in my dreams that I had in foreign places.”

West signs copies of the new book (published by the Museum of New Mexico Press) at the New Mexico Museum of Art on Sunday, May 17, after a conversation with Wilson-Powell. Coinciding with the book’s publication, an exhibit of his paintings, The Alchemy of Memory, opens at Phil Space on May 22.

The artist has remained true to his powerful vision of the West as a place of myth and spirit but also one of struggle, drought, and plague. West’s family came to New Mexico in 1926. He was one of five children, and the family was poor. West, like his father, had an artistic talent, although neither his father nor his siblings actively encouraged him. “Those were very tough years,” he said. “The depression hit in ’29. I was born in Ohio when my parents went for a short visit at the peak of the Depression.” West’s father, Hal, found employment with the Works Progress Administration. He was a friend of artist Gustave Baumann, who taught him printmaking techniques. “My dad had great visual memory and ability to draw, more so than I ever had. He was a storyteller, too, and stayed very true to that.”

That impulse to make narrative art was passed from father to son. West’s first major influence came in high school, where he was a student of Jozef Bakos — who, with Walter Mruk, Willard Nash, Fremont Ellis, and Will Shuster — was part of the Santa Fe-based artist group Los Cinco Pintores. “Joe was a real mentor in several ways. He took me on in my sophomore year. He knew of me because of my dad. He liked me beyond just the classroom and taught me to plaster. He was an old builder. For the rest of his life I stayed in touch with him.”

West’s graduate work at the University of New Mexico was in biology, and he taught the subject, along with history, at Santa Fe High School. After his college years, he sought to reconnect with his father and mend an alienation that began when West was in high school. “He lived on Canyon Road and had a little gallery that would open in the afternoon. He wasn’t well physically. I got reacquainted with him and developed a respect. I opened a little frame shop and slowly worked back into the art community.”

In the mid-1960s, while he was still teaching, West decided to study printmaking at New Mexico Highlands University. He studied under Elmer Schooley. “I loved Elmer Schooley, and he loved me. We really bonded. But we didn’t bond in the painting area. He wanted so badly for me to be a modernist and get away from storytelling and figurative work. He pushed me in a different direction. I tried to satisfy that, but I struggled because I knew it wasn’t my thing.”

In the 1970s, West began dividing his time between New York and Santa Fe, where he built custom homes with a friend while making his art. In New York he continued to explore print-making at the Printmaking Workshop of African-American artist Robert Blackburn. “During that period I started doing my dream imagery,” he said. Dreams began informing many of West’s compositions, and symbolic imagery merged with the familiar South-western landscape. “I began seeing John Talley, who died a few years ago. He was a real great Jungian analyst. Starting from that deep source of dreams is a very valid way to begin an image. I started a whole series of dream images, which is in the first chapter of the book, which I call ‘A Prairie Night.’ There are about 26 paintings all dealing with dreams about my complex family, my dad’s illness, the death of my dad.”

West’s paintings deal with moments from his own past and his childhood on a New Mexico ranch. The prairie was a microcosm, a self-contained oasis under threat from rapid expansion and development. That’s one way to read Prairie Homestead With Approaching Cosmic Storm, a painting from 1986 showing a bird’s-eye view of the land — a recurring perspective in his compositions — and a small, isolated ranch under threat from a massive tempest that fills the nighttime sky. Others might interpret the storm as representing the threat of nuclear catastrophe. West, like Social Realist painter Thomas Hart Benton, merged his dreamlike vision with contemporary social concerns, especially those affecting the Hispanic and Native cultures that influenced his art. Against these backdrops of differing cultures, the dream narratives unfold. “I grew up in very real world. It wasn’t all just beautiful scenery. It was complex. I felt comfortable growing up in a Native American and Hispanic world. I didn’t want to paint clichés of the modern West. It all had a certain universal theme to it. The love of place is universal.”

In his 1984 painting Brain Over Cerrillos, a long, sinewy stem topped by a human brain wrapped in barbed wire rises like Jack’s beanstalk from a small corner of an isolated ranch in the desert. “A lot of this is about that psychic pain of leaving a place but also the complexity of having to survive on a prairie or in a small village.”

West’s repeated use of a stratospheric vantage stems from his lifelong dreams of flying. Accompanying him on one these dream flights is his younger brother Archie. An image of the two brothers, trapped inside a block of ice and zipping past a sheep herders’ camp, is one of several renderings of West’s aerial fantasies. “We were flying over this old country we had grown up loving. There’s a sense of nostalgia but also a sense of change.”

The Southwest art scene he had grown up with changed dramatically after World War II. The G.I. Bill brought to the state a fresh wave of artists who advanced Postmodern painting styles such as Minimalism, Hard Edge, and Color Field. Narrative, representational works were out of favor. But something wild survived in the recesses of West’s subconscious mind as stories that needed to be told.

With the development of nuclear technology in New Mexico, the simple ways of ranch life seemed destined to change. The dark shadow cast by early atomic tests in the desert became an abiding theme in West’s work. His Storm Cellar, Nuclear Family, from 1989, for instance, is a despairing image: A gaunt and ghostly family huddles beneath the Earth’s surface, while the land above, ravaged by a nuclear apocalypse, is littered with dead grass and bones. One gets the sense that an older way of life has been pushed underground. The allegorical painting gets that point across more explicitly than pure abstraction.

At his first major exhibition at a Denver gallery, West posted lines from the Yeats poem “The Circus Animal’s Desertion,” which spoke to him about some essential quality that remains when all vanishes:

Now that my ladder’s gone,

I must lie down where all the ladders start

In the foul rag and bone shop of the heart.

“After the war the existentialists were basically saying, ‘What do we have left?’ We don’t really believe in God anymore. After this horrible war and the Holocaust and all of that, can you still believe in a loving God?’” West said. “What do you have after all your institutions are decaying? Your own heartfelt thing. You can’t really believe in an afterlife. We better create something right here if it’s going to work.” ◀

▼ Jerry West: The Alchemy of Memory: conversation and

book signing with the artist

▼ The Alchemy of Memory: Paintings by Jerry West