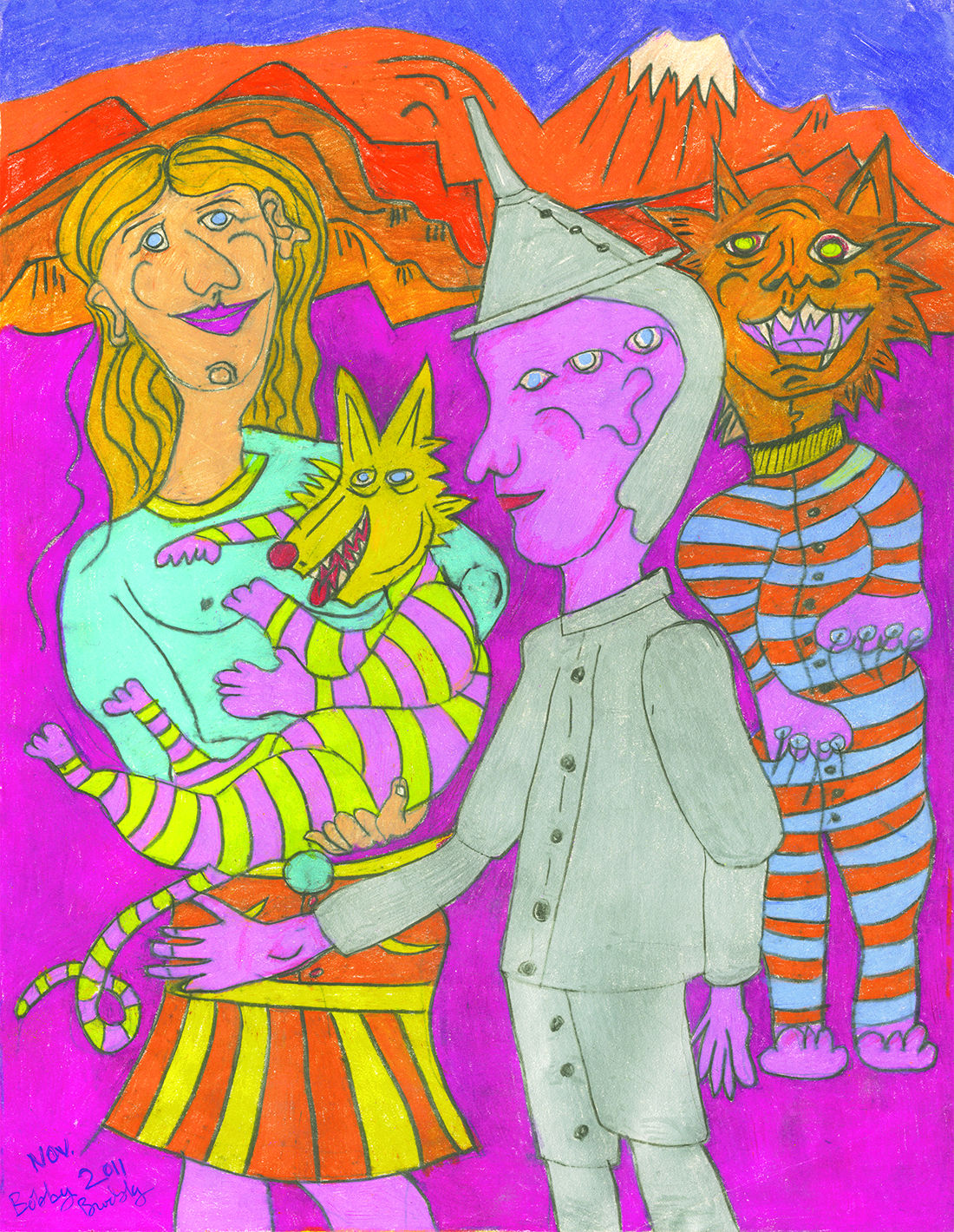 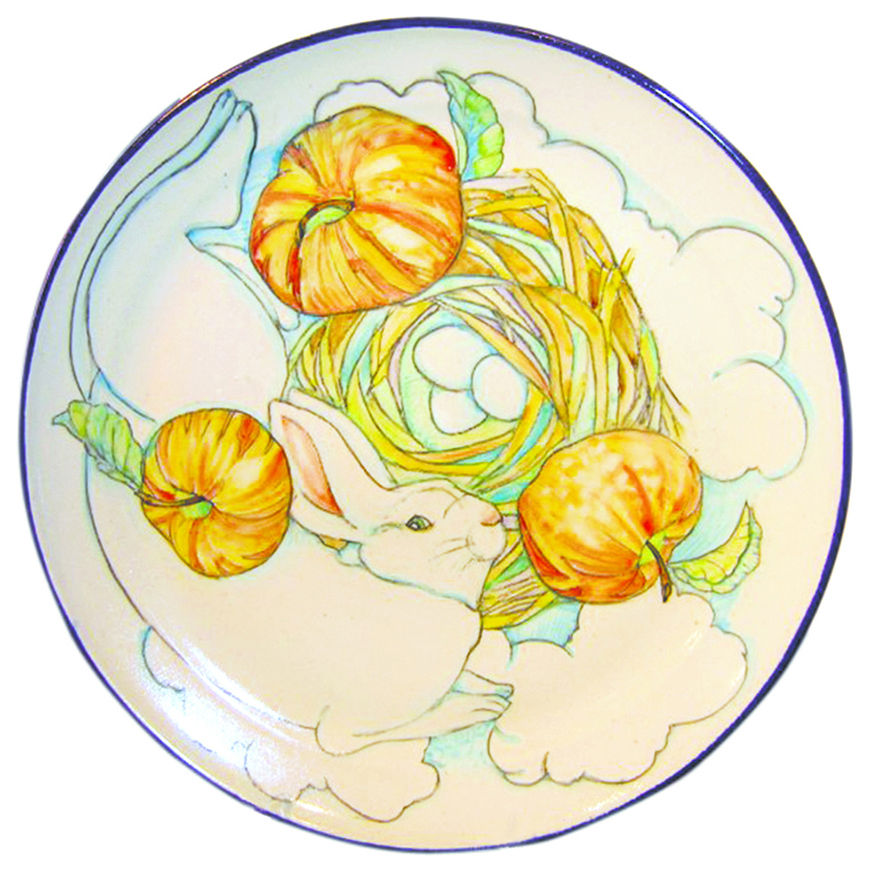 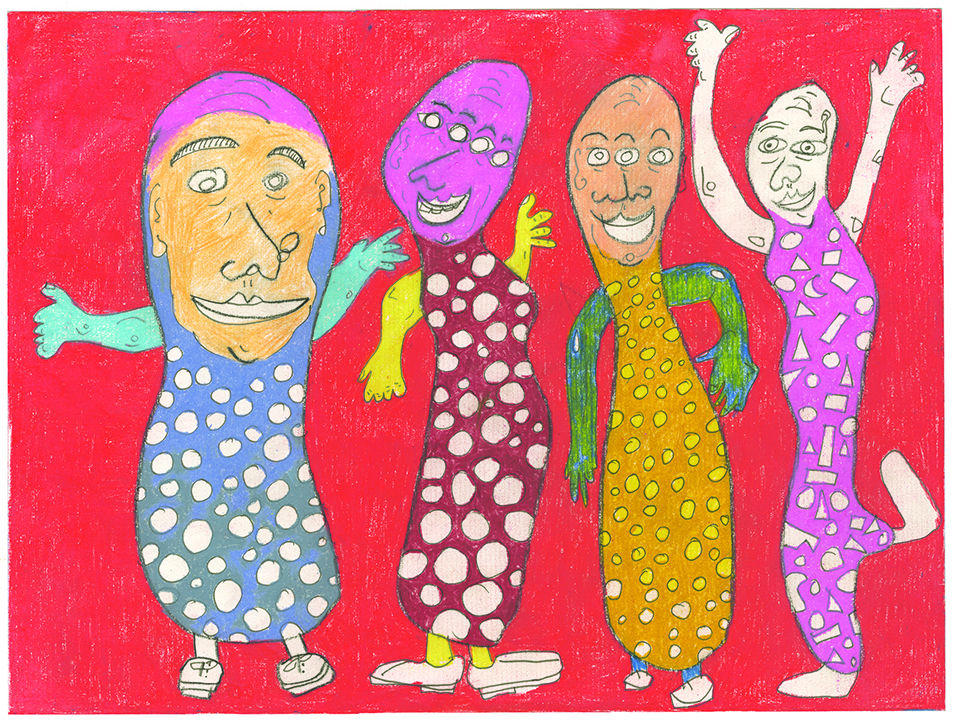 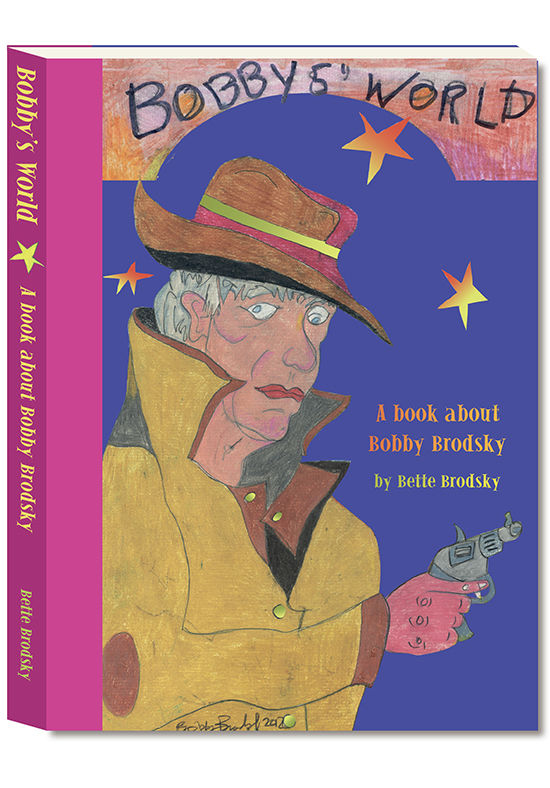 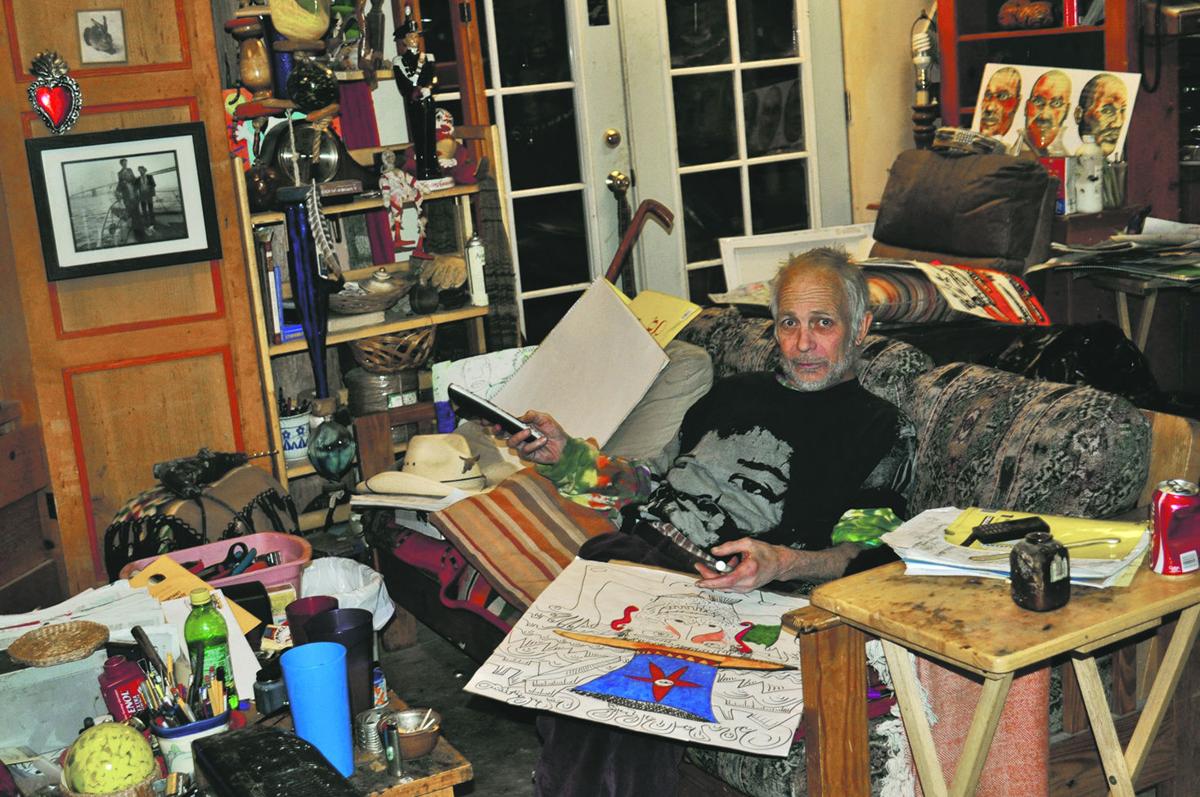 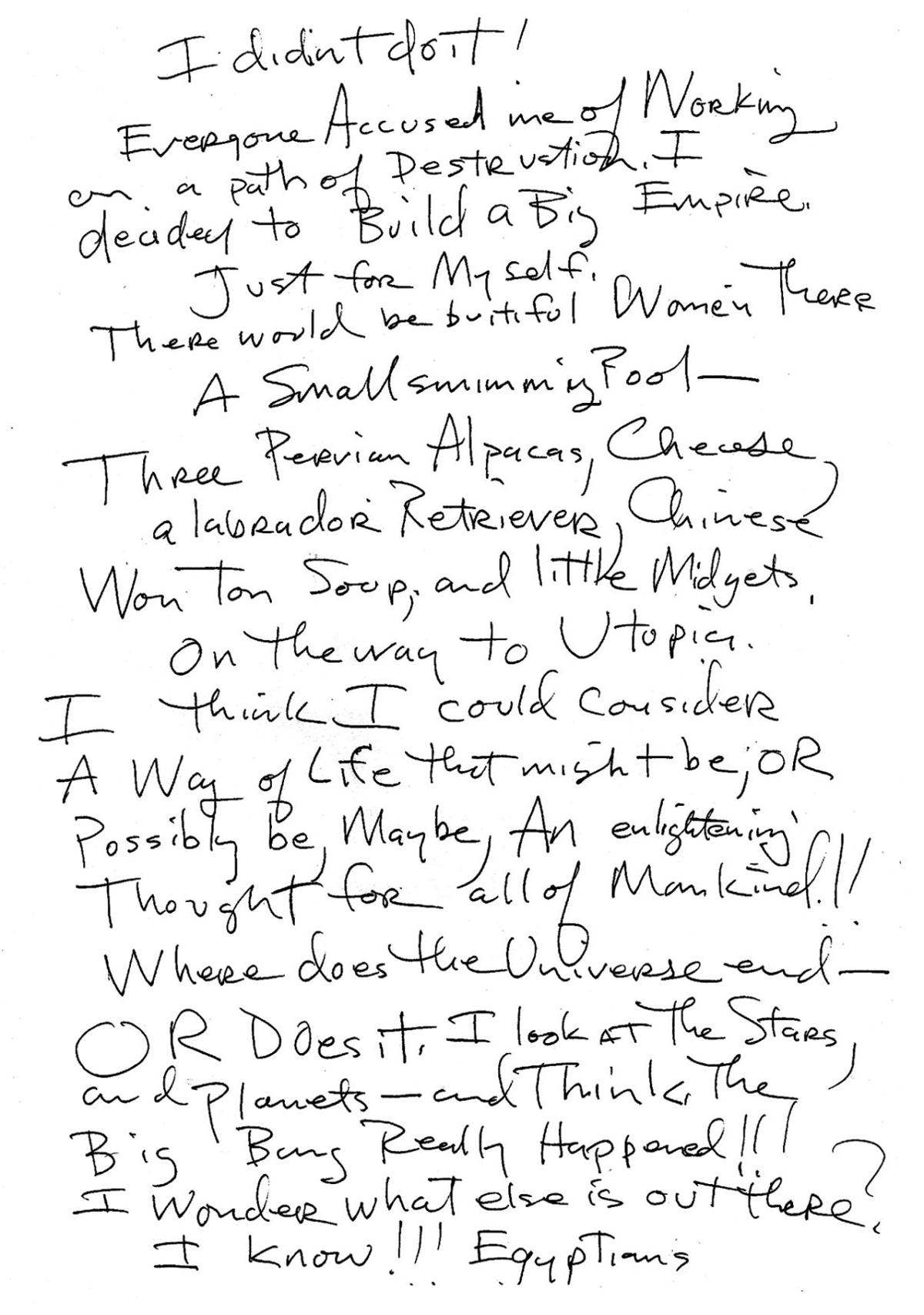 I Didn’t Do It!, from Brodsky’s 2009 self-published poetry book, Ben

I Didn’t Do It!, from Brodsky’s 2009 self-published poetry book, Ben

In Bobby’s World: A Book About Bobby Brodsky, we experience a beautiful, colorful phantasmagoria and also a horrible mishmash of disjointed poetry and mistakenly drawn people and wonderful combination-creatures, a cosmic and earthly encyclopedia of landscapes and characters and houses and volcanoes and buttes and spaceships, grinning cats, sad snakes, hands with faces, gaudy coffee mugs, striped wolves with bones, cars full of naked pioneers, huge suns, jaunty buildings up and down hillsides, gorgeous crazy women and elephants and coyotes with three eyes in a row and men with three eyes in a row.

You get the picture. The drawings made by Robert Derby Brodsky (1952-2012) in the last two years of his life are wildly wide ranging and inventive, if not “precisely executed.” His sister, Bette Brodsky, who produced the new book, said he was producing the drawings — almost all colored pencil on Arches paper — “at the rate of one every two days, day after day. I’d go over and he’d show me, and I just thought they were so weird and amazing. In the last year, he would get a newspaper — he loved to read the newspaper — and he cut out pictures that he would draw from.”

One example shows up in Clown and Elephant, but Brodsky’s elephant’s trunk and tusks and an ear are all twisted up like in a Picasso painting. “He loved Picasso,” his sister said. “One of his identities toward the end of his life was Blavo Because-o, and he wore a beret and a striped shirt.”

When Bette Brodsky conceived the project, she had recently been laid off after years at New Mexico Magazine. “I was a book designer, and I had done a ton of books for other artists [including Luis Jiménez, Roxanne Swentzell, Pablita Velarde, and Doug West], and I wanted to do a really nice book for my brother. At that time, he was foreclosed out of his house in La Cienega. He had built that himself and lived there for more than 30 years and built his very successful business, Rabbit Artworks, with his wife, Tina Davila.”

Brodsky was born in Albuquerque and lived on a small North Valley farm during his early years. He spent his youth in Honolulu and in Claremont, California; his parents had split up and gone in different directions — his father to Claremont and his mother to Hawaii. Brodsky started working with clay as a freshman in high school, and he was selling works in ceramic at age fifteen. He was very driven to succeed as an artist, just like his father, who was very driven to be a flight scientist. “My dad’s first job was at Sandia National Laboratories; he was a bomb scientist,” Bette Brodsky said. “His people were Russian Jews who came to the States with six brothers and started a tanning business in Philadelphia. My mom’s family were Irish Catholic, so it was a mixed marriage at the time.”

Brodsky earned a bachelor’s degree in fine arts at the California College of Arts & Crafts in Oakland, California (now California College of the Arts). He and Davila met at CCAC and moved together to La Cienega in 1974; three years later they were married. Their three sons — Cris, Ben, and Alo — were born in the 1980s. The couple’s pottery was soon selling at galleries in Dallas, Santa Barbara, and Sedona. Their art-filled house was featured in New Mexico Magazine and Country Living. But by the early 2000s, things got “a little harried,” as Bette Brodsky puts it. “Bob began to howl. He crashed and burned in a major way for the first time. Tina left him, the house and studio were sold. He was down but not out and built a new life.”

After Tina and Bobby divorced in 2004, he “reverted to his true self, what I call his hippie self,” Bette Brodsky said. He indulged in wine, women, and music and became an eccentric. “To me he was a wizard, a shaman, a soul man, and, like Mom and Dad too, a pixie, a sprite, an elf. He spoke in riddles and wrote poetry. He was funny and strange, exasperating and thought-provoking.”

She said her brother might have achieved everything he wanted and didn’t know what to do next. “That’s kind of my premise in the book, but I have to emphasize that this is a story that I’m telling. I was there and I know a lot of what happened, but it’s a story.”

After Brodsky died, his sister struggled for months about what to do with the tremendous variety of drawings she had. She went back to Claremont to visit her elderly father and stepmother. She drove around the city, remembering things from long ago. And she had her brother’s drawings all spread out on the dining-room table. She would think, what am I going to do with these? Then she read a self-published poetry book that Brodsky did from 2006 to 2007 and was overwhelmed by the joy and creativity there. Somehow, the words helped her organize the book. The drawings and poems evolved together into the memorial book.

“I set up some pages in [the desktop-publishing program] InDesign, and I started with a car because Bobby loved road trips. So it’s cities and landscapes. We lived in Paris when he was in high school, and he had been to Morocco and Spain, Israel, Russia, Mexico. The drawing of a camel and the pyramids was imaginary, because he hadn’t been there. Finally, there’s a flying saucer and he lands in New Mexico, the end of that journey in the book.”

Before that road trip in pictures, she has an introductory section. Rather than paragraphs and pages of gray text, she varies the appearance of the text and peppers it “like in a kid’s book” with small pictures: examples of Brodsky’s drawings and photographs of his family and ceramics. In the main part of the book, she punctuates the flow of crazy-creative drawings with short writings — some by her brother and some her own observations — and snippets of lyrics from his favorite musicians, including Bob Marley, Steppenwolf, the Beatles, Bob Dylan, Jimi Hendrix, and Talking Heads.

One of Brodsky’s local highlights was a 1998 exhibition at the Governor’s Gallery in the Roundhouse. It featured his elaborate, whimsical “Etruscan fertility vessels.” “He loved embellishment. His first pieces that he sold were covered jars, and the tops were curled like the top of a Tastee Freez ice cream cone.

“Our mom was artistic. She had worked ... for Eckerts, a furniture and interiors shop in Albuquerque. She took his pottery and they started selling it there when he was about 15. Then he started interning with Dick Masterson and Jenny Lind. They had a pottery business on North Fourth. Tina and Bob’s business was functional, decorative ceramics. He threw the pots, and Tina did the amazing drawings. I was one of the women they hired to paint the ceramics based on Tina’s drawings. Bobby could throw pots all day. He could do a whole dinnerware set where every plate was the same size and every bowl was the same. He was a master potter.” He was also a sculptor, a glassblower, a musician, and a golfer. “And he was a successful businessman,” Bette Brodsky said. “He loved to make deals. But then there was the wonderful work that expressed his personality.”