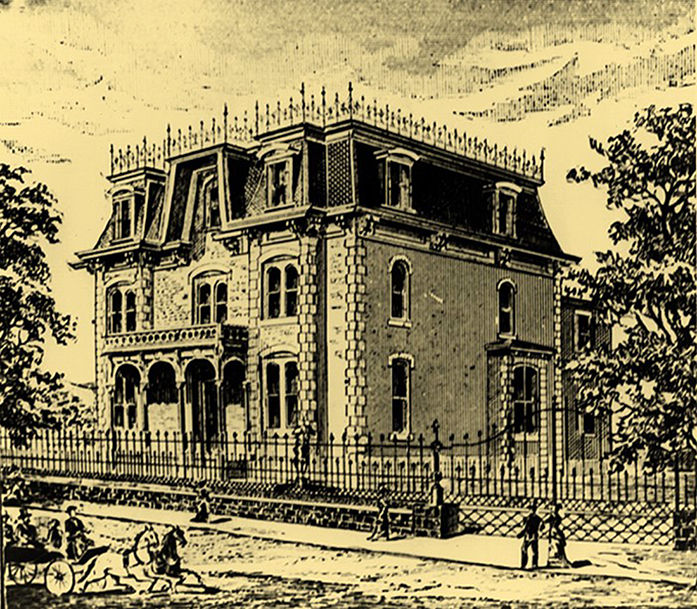 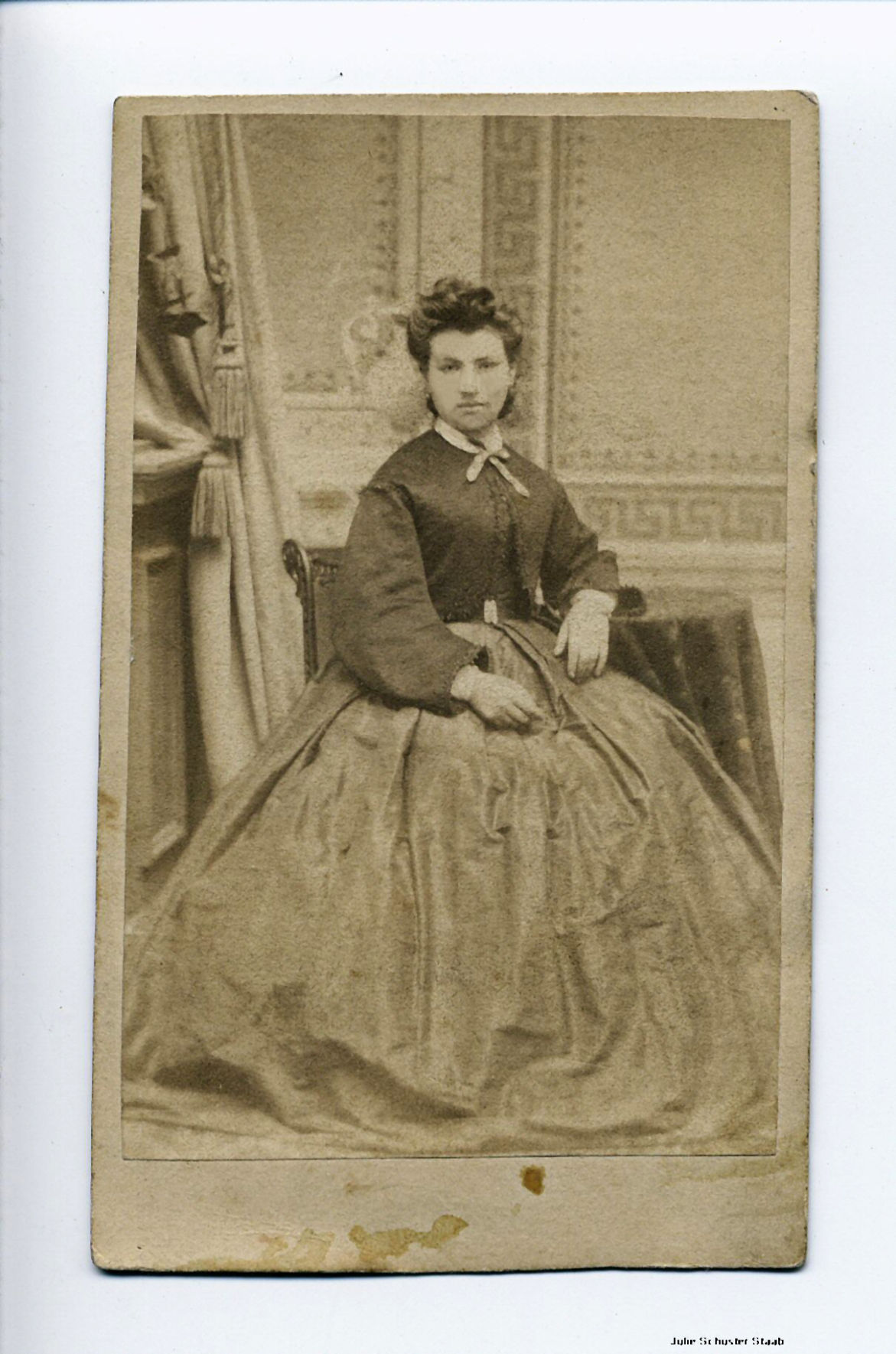 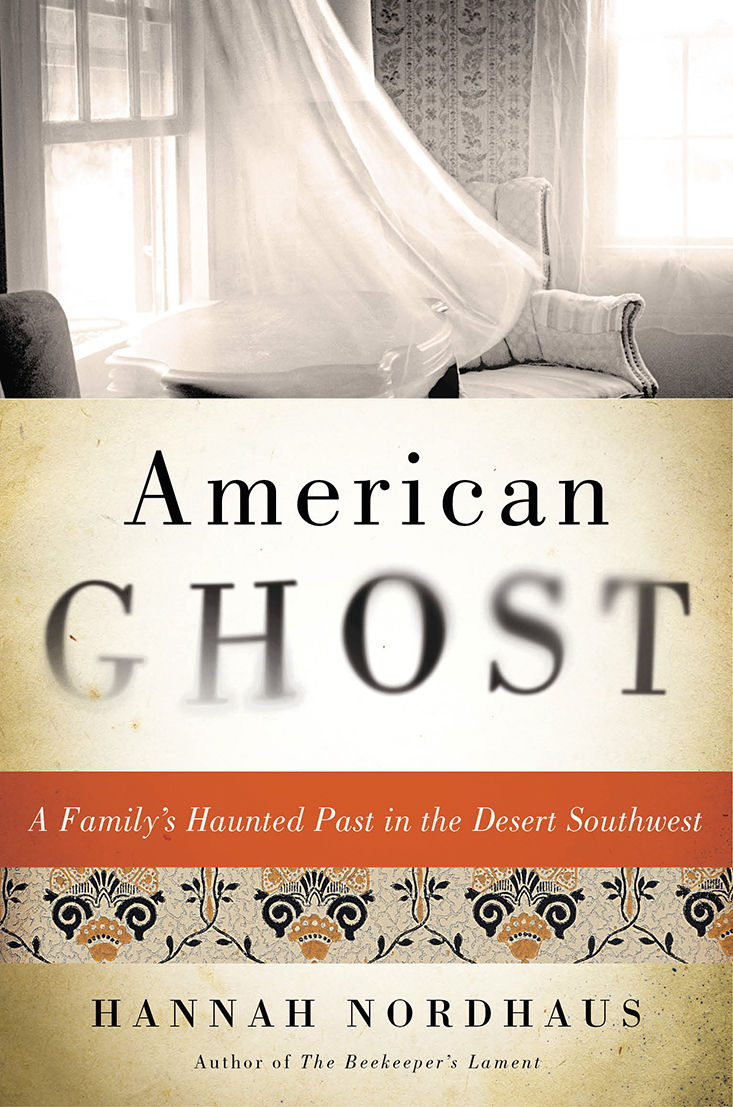 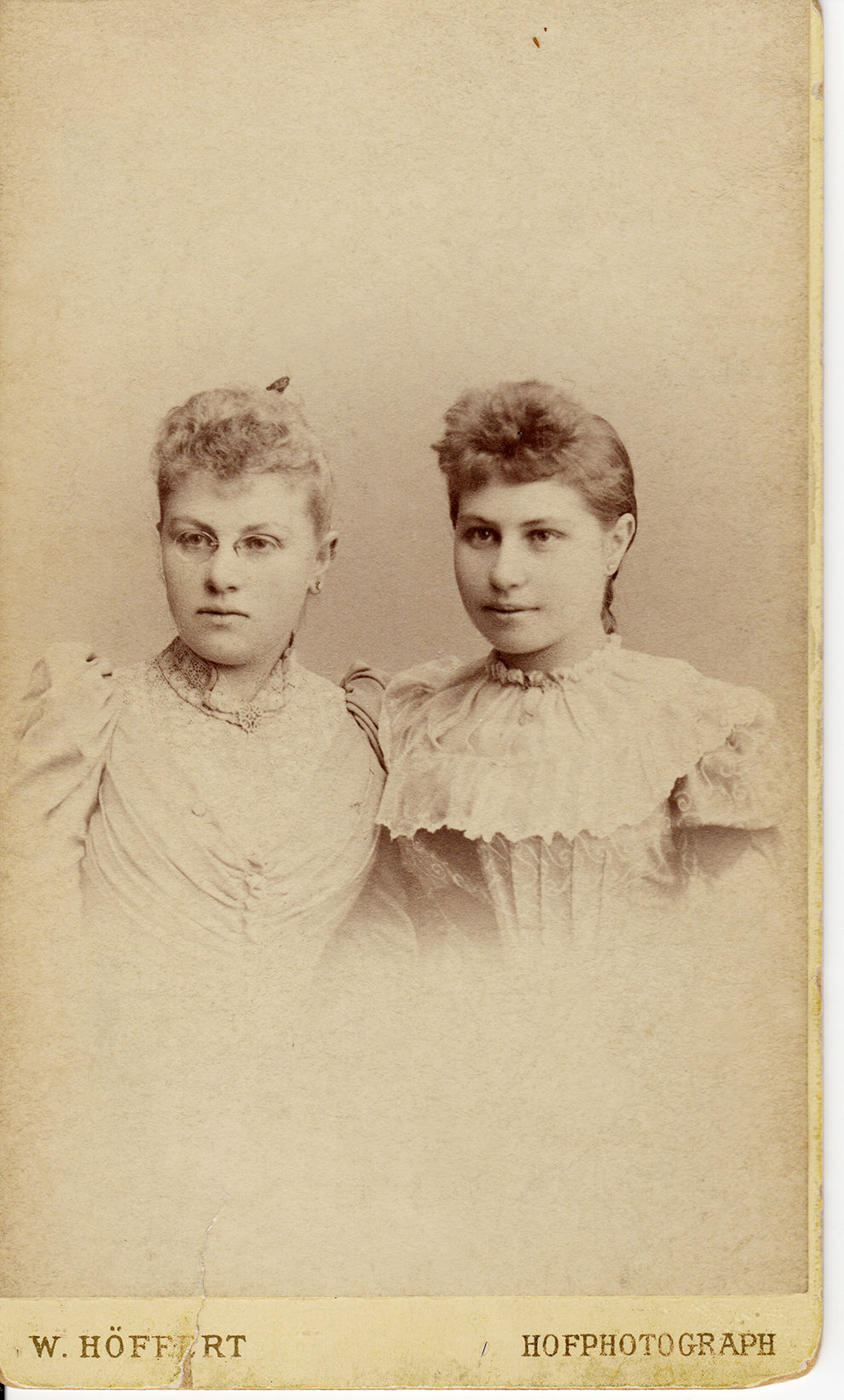 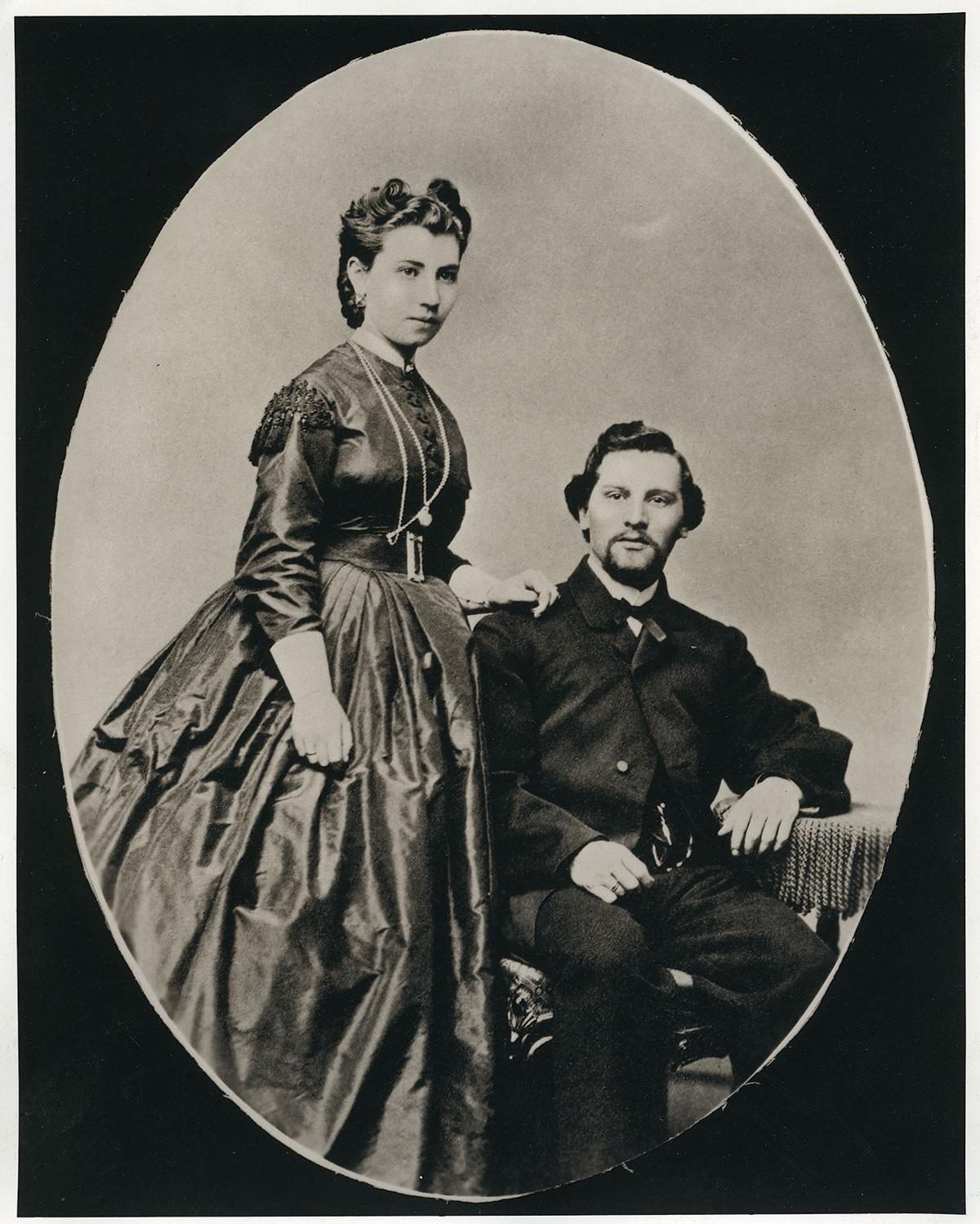 Julia and Abraham Staab early in their marriage; from American Ghost, courtesy HarperCollins 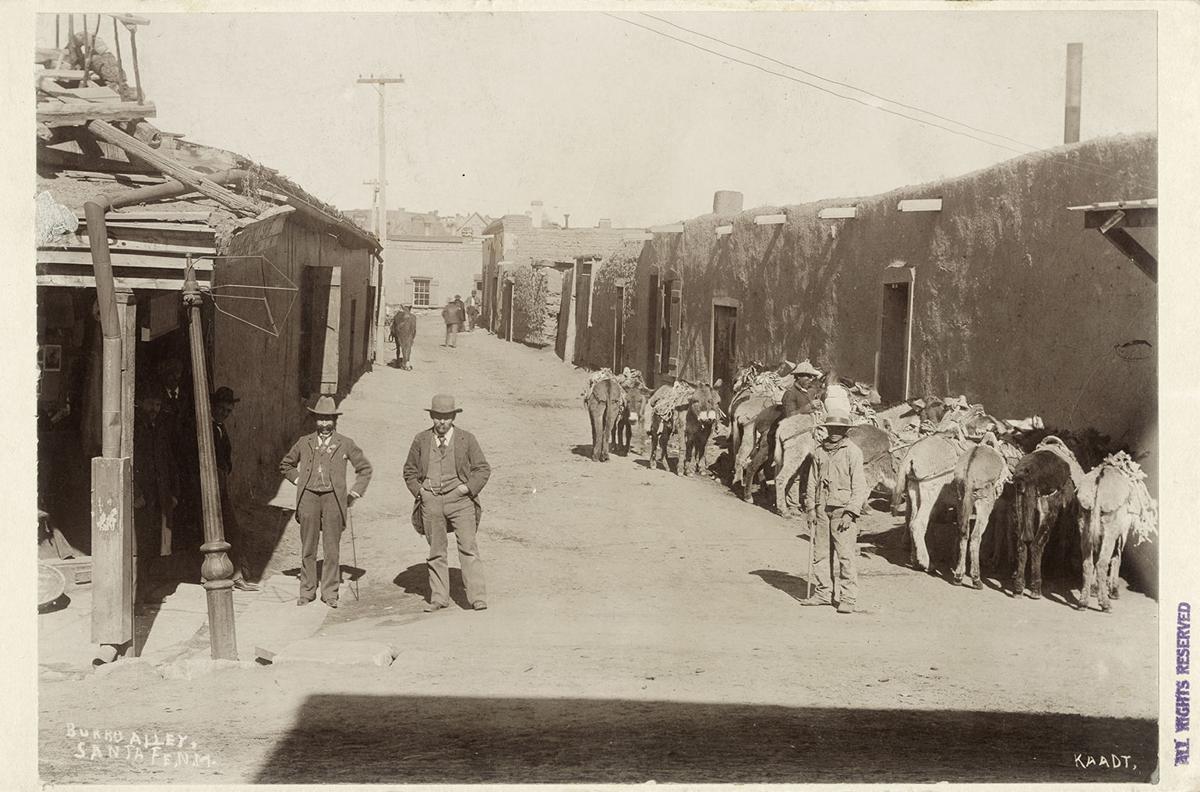 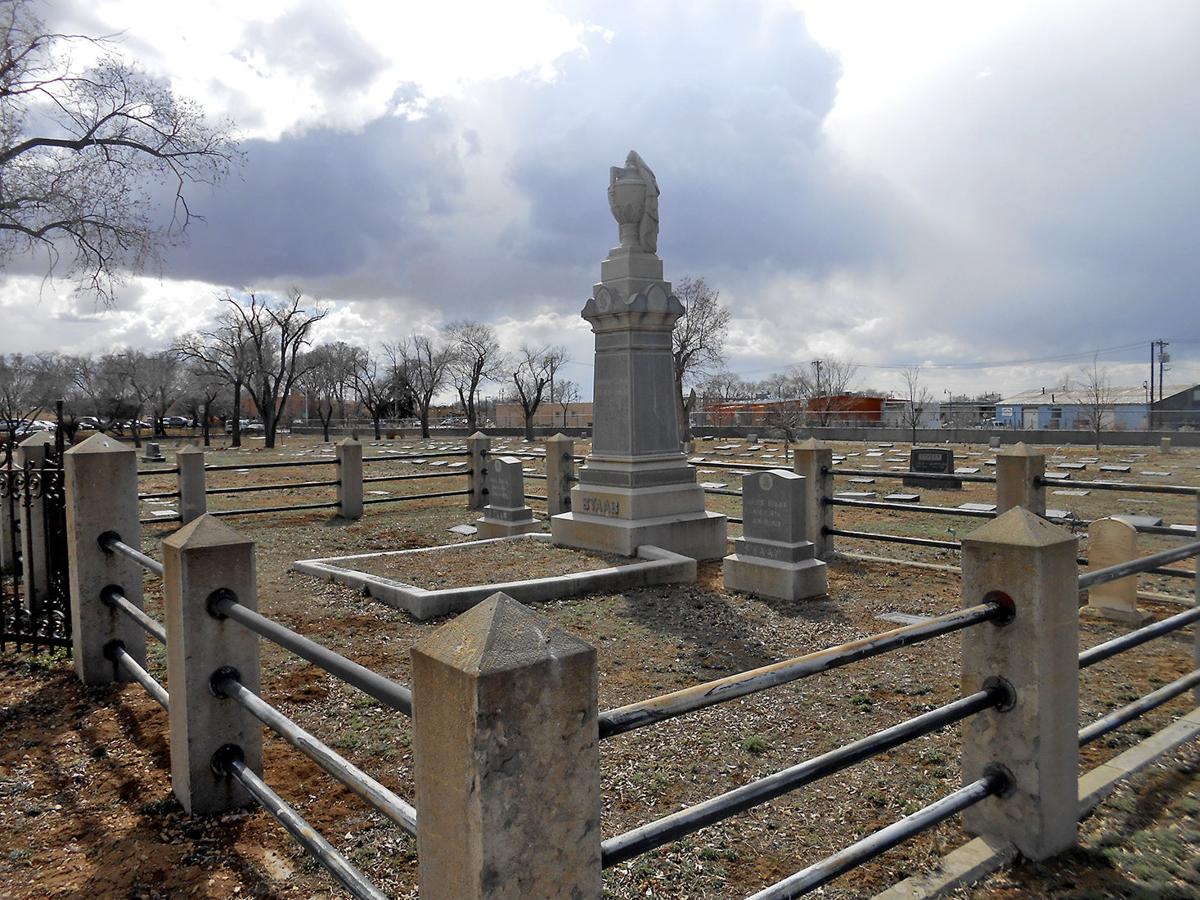 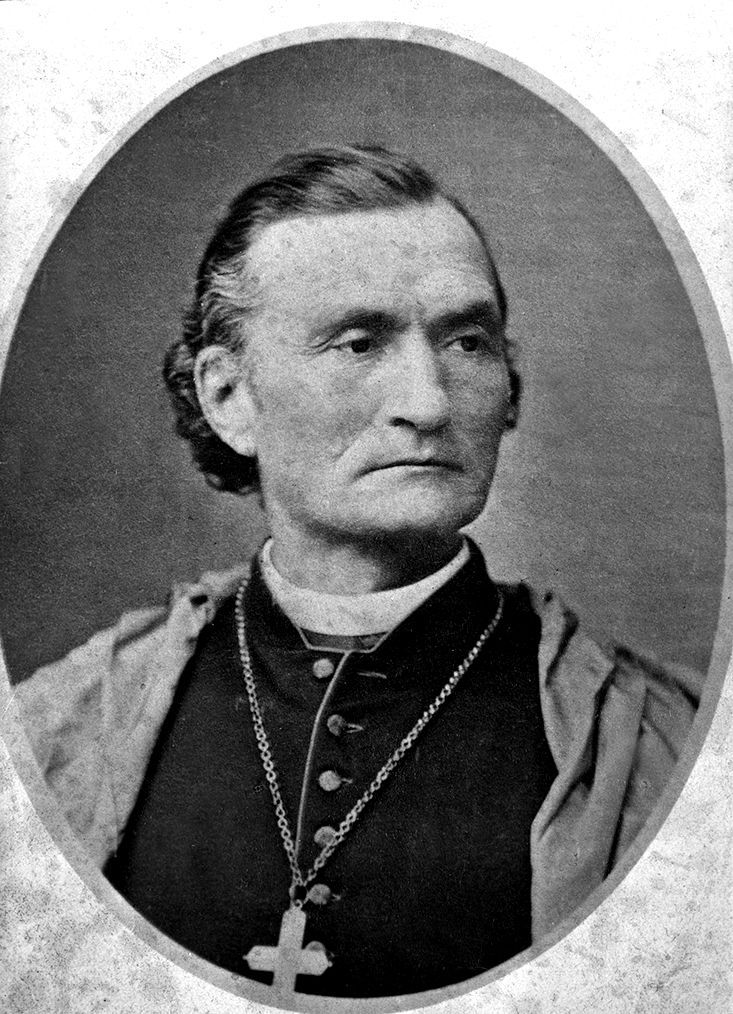 Julia and Abraham Staab early in their marriage; from American Ghost, courtesy HarperCollins

When Hannah Nordhaus was a teenager, she would tell her friends about her great-great-grandmother Julia Staab, a pioneer of the Western frontier, whose ghost was often spotted in the hotel that used to be her mansion in Santa Fe. “I thought it was an exciting story, but I never believed in her ghost,” Nordhaus told Pasatiempo.

Staab, who died in 1896, began appearing on La Posada’s staircase and in her second-floor suite in the 1970s. Guests and staff spotted her or heard her speak. The dark rumors that arose around her, however, didn’t have much in common with what was known in the family. As far as the younger generations understood, Staab was a German-Jewish immigrant who became a member of high society, and her husband, Abraham Staab, was a powerful and generous businessman. Together they raised a large family. But local Santa Fe explanations for Julia’s restless spirit paint Abraham as a monster who kept his wife chained to a radiator because she went crazy after the death of her baby. Some speculate that she committed suicide — possibly with an overdose of laudanum — or even that Abraham murdered her.

Nordhaus grew up in Washington, D.C., and spent summers in New Mexico, where much of her extended family still lived. After college she worked as a ski instructor in Taos before eventually settling in Boulder. She is the author of the bestselling novel The Beekeeper’s Lament. A few years ago, while visiting her family’s home near Las Vegas, New Mexico, she came across a history written in 1980 by her great-aunt Lizzie. “It was this crazy story about my family that was a lot more complex than I’d been led to think,” she said. “It’s a story of sadness, madness, and forbidden love, drug addition, suicide, knives to the bosom, disinheritance, lawsuits, and family feuds.”

It was clear that some of the rumors about Julia had a core of truth, but a real person was being used as fodder for ghost tours and television shows like Unsolved Mysteries. “Julia was an actual woman who had crossed the Santa Fe Trail. She’d been a mother, like me. She was more than an anecdote.” Nordhaus spent the next few years searching archives, newspapers, public records, oral histories, and other sources as well as conducting interviews with distant relatives around the country and in Europe to find out as much as she could about her ancestor. The resulting book, American Ghost: The True Story of a Family’s Haunted Past (published by HarperCollins), is celebrated with a reading, signing, and reception at La Posada on Friday, March 13.

American Ghost is more than a biography of Julia. It’s a chronicle of German-Jewish immigration to the American Southwest, a reckoning of family secrets, and an account of the author’s personal ghost hunt. Julia (née Schuster) was born in 1844 in the German village of Lügde, one of a dozen children. Abraham, also from Lügde, was five years older. When he was fifteen, he set off for America to join his brother, Zadoc, and work for their cousins, the Spiegelbergs, who had been the first Ashkenazi Jewish settlers in Santa Fe. In 1859, Abraham and Zadoc opened a dry goods store on the Plaza, and in 1865 Abraham returned to Lügde, married Julia on Christmas Day, and brought her back with him to a small home in Burro Alley, where they started their family.

Julia  was sad and often sick. Several times she traveled to Germany in search of a spa cure. On her final trip, five years before her death, she was accompanied by two of her daughters, Delia and Bertha. Bertha, Nordhaus’ great-grandmother, kept a diary, which Nordhaus read as she and her own mother visited Germany to learn more about Julia’s life. Included in the book is what she found out about Julia’s sister, Emilie, who stayed in Germany. “I got the sense that Julia always felt really yanked out of Europe and taken to this very rustic, rude place, not nearly as cultured as what she was accustomed to,” Nordhaus said. “In many ways, Emilie’s life was the alternate life that Julia could have lived, with everything she wanted, but it ended so horribly.” Emilie had a loving family and lived to age eighty-one. She died in the Theresienstadt concentration camp near Prague. No Jews in Lügde survived World War II. “I didn’t know, when I started, how connected I’d wind up feeling to the European history of my family. Julia and Abraham and my great-grandmother Bertha were much more connected to their roots in Germany that I had ever realized.”

One person with whom Julia did form a friendship in Santa Fe was a business associate of her husband’s — Archbishop Jean Baptiste Lamy. The mansion Abraham built for Julia in 1882 was just down the street from the site of the Cathedral of St. Francis of Assisi, which Abraham had a hand in funding. Julia and the archbishop took walks together; he helped her plant the apricot trees on her property. Nordhaus notes that in Lamy of Santa Fe, a biography of the archbishop, author Paul Horgan devotes a chapter to an unnamed German woman whom Lamy held in high esteem. From this thin evidence, Nordhaus’ grandmother Ginny liked to speculate that Julia had an affair with the Catholic leader, and that, based on the timing of their friendship, this liaison produced Nordhaus’ great-grandmother Bertha. Nordhaus conducted DNA testing of her ethnic markers to disprove Ginny’s theory. Unfortunately, the results revealed she has fewer Jewish markers than she presumed, and more French — a heritage shared by the archbishop.

“If I’d been able to test his DNA, too, I might have more conclusive answers. And though the DNA tests didn’t rule him out, I really don’t think the archbishop is my great-great-grandfather,” Nordhaus said. A cousin tried to get her to sneak into Bishop’s Lodge Resort and Spa to swab the cloak that is kept there, which is supposed to have belonged to Lamy, but she hasn’t taken that step. Further research led her to believe that the German bride Horgan wrote about was actually Flora Spiegelberg, another Jewish immigrant in Santa Fe who was married to Abraham’s cousin Willi.

Though it’s probable that Abraham was strict and authoritarian, Nordhaus found no evidence to suggest that he was abusive in ways starkly different from other men of his time. He was embroiled in numerous lawsuits, and he was involved in some shady real-estate deals with the town powerbrokers, known as the Santa Fe Ring. The history of depression in the family also came to light. “My grandfather was the most cheerful guy you’d ever meet, and it doesn’t seem like his mother, Bertha, was depressed either,” Nordhaus said. “But it does seem like so many other members of the family really were so troubled. The boys were certainly more affected than the girls.”

Throughout American Ghost, Nordhaus tells of visits to mediums and psychics who contact Julia for her. A skeptic by nature, she originally planned for these passages to serve as comic relief. “But once I got to know them and see how seriously they take what they do — you just can’t sit in a room with someone for an hour who earnestly believes they’re talking to your dead great-great-grandmother and not engage in some way. The only way to be respectful is to participate, and I did get swept up a few times.” In the end, she spent the night in Julia’s suite at La Posada. Like the DNA test, the results were inconclusive. Nordhaus would like to believe in the legend, and she doesn’t deny that other people have had encounters with spirits at La Posada, but she doesn’t think she’ll ever see any evidence that will convince her beyond a shadow of a doubt that Julia is a ghost. And though she has finished ghost hunting, she is still interested in finding out more stories about her family, which she is sure exist in diaries and letters, tucked away in attics and basements.

Regardless of personal belief, the staff at La Posada isn’t taking any chances. The book-launch party coincides with a refurbishment of the Staab mansion. Before the work started, a staff member who has “a relationship” with Julia spoke with her and got her blessing on the plans. (Apparently, previous renovations have upset her.) The upstairs rooms are getting new fixtures, furniture, and wall coverings; the bar has a new top; and all the floors have been refinished. Decades’ worth of wax and black grime were stripped away to reveal original parquet wood flooring with exquisite marquetry details — a rare level of design and craftsmanship. One explanation for the restlessness of Julia’s ghost is that she is perpetually worried about entertaining and the way her home looks to guests. If that is true — and there’s no reason to suspect it’s not — then she should be very pleased. ◀

▼ Book signing and reception for American Ghost: The True Story

of a Family’s Haunted Past with author Hannah Nordhaus

▼ No charge, but reservations are required; email

In a way, La Posada de Santa Fe — one of the city’s most luxurious hotels — has pulled off a rather bizarre camouflage act. A rear corner of the 1882 house is visible from La Posada’s patio restaurant, but from the front, you have to step back on Palace Avenue to see the old Staab House popping up from the 20th-century building additions.