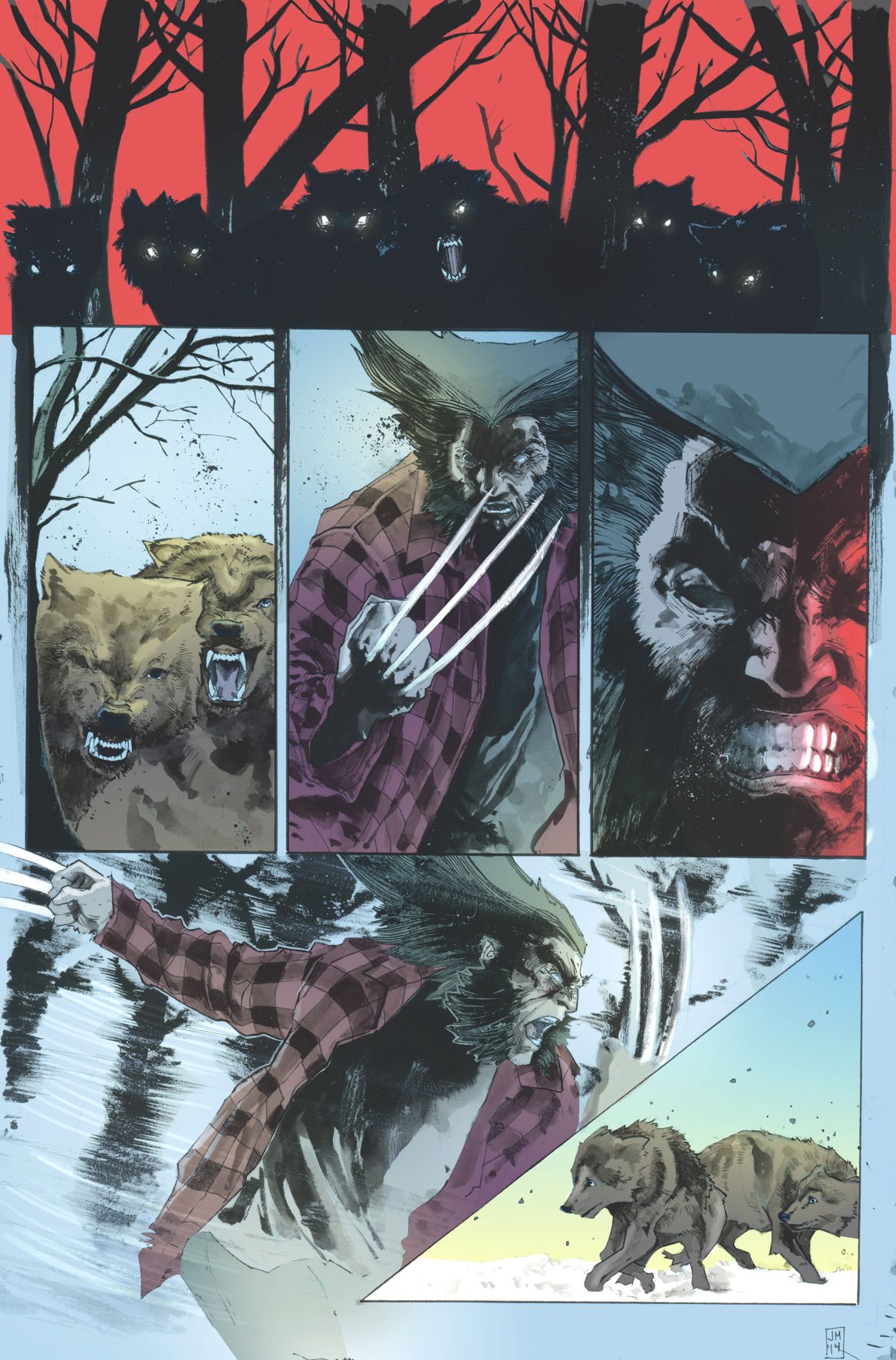 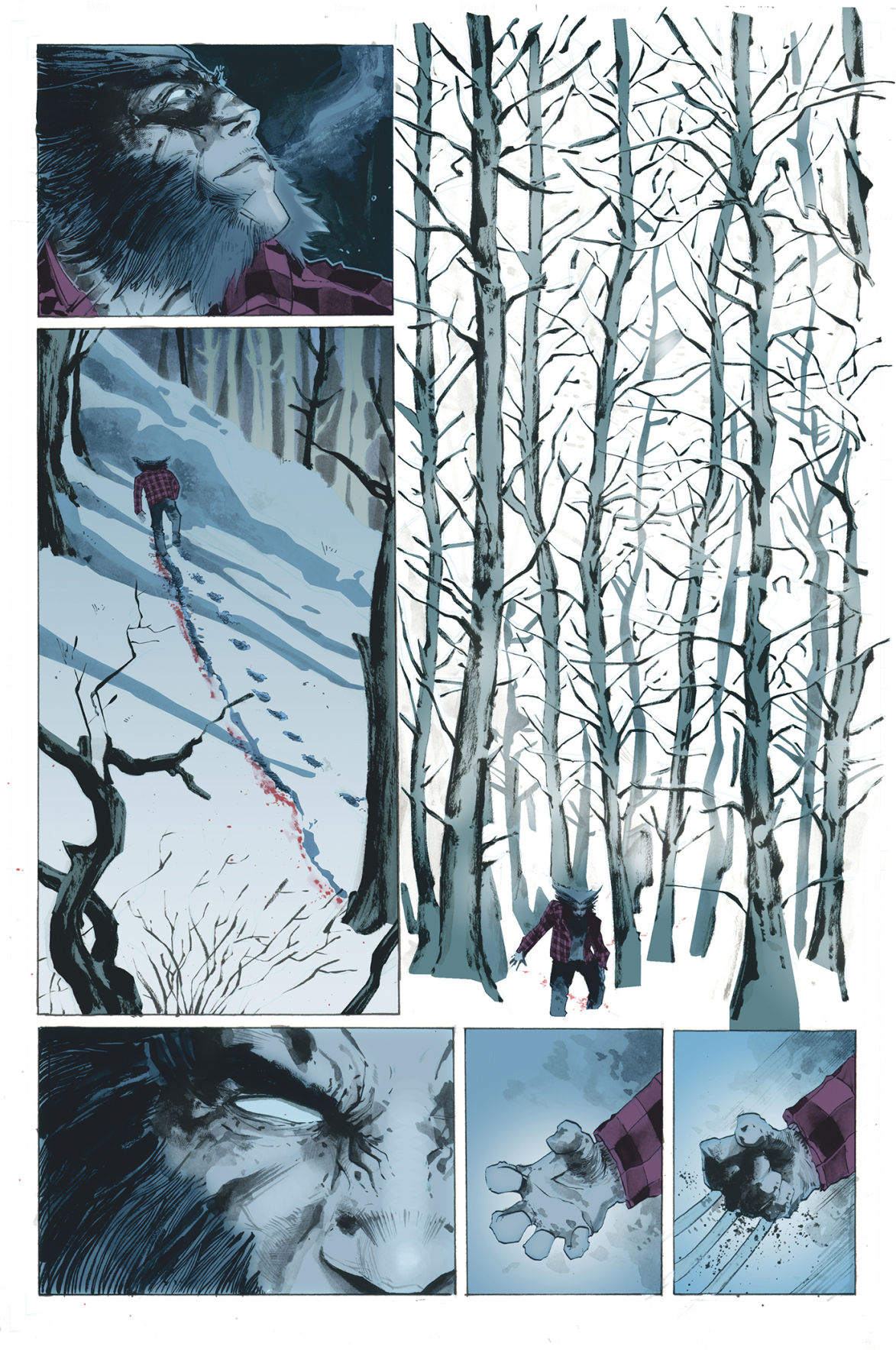 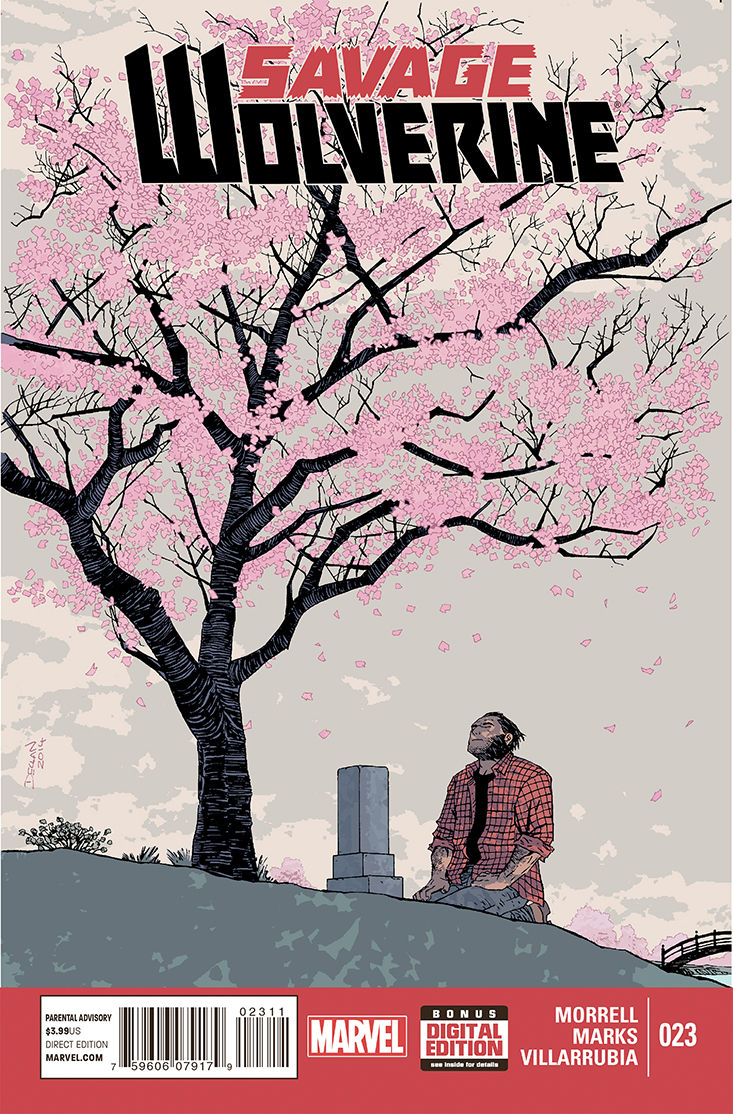 A week before the Sept. 24 release of David Morrell’s story “Feral” in Savage Wolverine Vol. 1, No. 23, the author shared with Pasatiempo the gist of the script he wrote for Marvel Comics. The more he divulged, the more his tale resembled Morrell’s first novel, the 1972 action thriller First Blood, which featured a troubled Vietnam veteran named John Rambo. Wolverine has inhuman claws that rip through the flesh of his hands when danger threatens. Like Rambo, he has a complex and tortured back story.

Both characters are alienated from a society that doesn’t understand them, and both tend to be violent. Both stories involve a pursuit through difficult terrain; killing; and intergenerational, father-son-like relationships. As in First Blood, the action in “Feral” is taut and nonstop. Beneath both characters’ raw desire to survive are existential questions that steer each story’s outcome. Wolverine, for example, must make a choice about his essential nature. “Some people will be shocked,” Morrell said. “It’s not the choice you think [Wolverine] would make.”

Morrell, the author of more than two dozen action-adventure novels, has only recently dabbled in comic storytelling. Issue No. 1 of his Captain America: The Chosen, a six-comic series illustrated by frequent Marvel artist Mitch Breitweiser, was released in September 2007; the collected trade edition was published in 2008. He followed that in 2013 with “Frost,” a two-comic Spider-Man adventure collected in a volume titled Peter Parker: The One and Only. And now he’s written about Wolverine, possibly Marvel’s most complex and troubling hero. “Here I’ve got Captain America, Spider-Man, and Wolverine: the great trifecta,” Morrell said. “All of them have maddeningly complex back stories. I was excited to do it but told the Marvel editors that I wouldn’t be doing it with all the detailed back story. I didn’t want to do the type of research where you have to know all the details of what happened to the character in a particular issue back in 2005. What I was interested in with these three characters was who they are and what makes them who they are — the identifying elements of their character, the virtues that motivate them.”

This focus on character, albeit supercharacter, and the ethical dilemmas that come with power make Morrell’s writing more thematic than the writing in most comic books, with plot and symbolism that’s sleeker and more meaningful. “With Captain America, I had to wonder what it would be like to be a superhero named after the United States who had been battling since 1941. I kept coming back to the military virtues: courage, honor loyalty, sacrifice. On the other hand, he had to be tired, he had to be worn out, doing what he started doing all those years ago. With Peter Parker, with Spider-Man, it was the idea that with great power comes great responsibility. What if Aunt May were in danger of dying and on his way to her, he kept finding other people who desperately needed his help? How do you ethically handle that decision? With Wolverine, his essential characteristic is that he’s part animal, part human. I thought it would be interesting to have a story in which he chose which part of him to embrace.”

Morrell’s passion for comics began, as it does with many people, when he was a kid. But his tastes were admittedly dark. In his afterword for The Chosen, he writes that as a boy in the 1950s he was addicted to books from crime and horror publisher EC: Tales From the Crypt, The Haunt of Fear, The Vault of Horror. “Those comics had very strong, creepy stories,” he explained. “EC became a sort of poster child for gruesome and violent extremes. But Congress went after them and other publishers of edgy comics, prompting the industry to adopt the restrictive, internally censoring Comics Code Authority. “I didn’t realize it at that time, but that’s when I lost interest in comics — when they got cute and dull.” Morrell has a shelf of reissued EC Comics — ‘‘They’re all really good,” he said — and they provided inspiration for his Savage Wolverine work. “When I started Wolverine, I wondered, How much could I push this? I wrote up some panels that were very graphic in terms of violence that I didn’t think Marvel would go for. But they were never discussed. So this is not a neutered, denatured comic. It has great impact. I think of it as my homage to EC. I get the same feeling as when I was a kid.”

Comic writing is not as easy as it seems, Morrell said. When he showed his first comic to a crime-fiction editor, the editor commented, “You didn’t do much writing. There’s hardly any dialogue.” This led Morrell to ask that Marvel include some of the narrative he wrote at the end of The Chosen and “Frost.” “It’s like screenwriters who try to write novels,” he said. “They take that visual sense for granted. It’s a new way of thinking for them. Conversely, when a novelist switches over to visual media, its first principle is to ask, ‘What’s the intention?’ and ‘How do I picture it?’ In comics, it’s the visuals that tell the story. It’s done with minimal dialogue.”

The inclusion of the script, set on the page in the manner of a screenplay and broken into panels, makes for fascinating, back-and-forth comparisons between the writer’s words and the artist’s renditions. Once he’s written the script, Morrell said, he doesn’t have much dialogue with the artist — especially given the quality of the artists he’s worked with. “I don’t think any would dare make a change in [Spider-Man illustrator Klaus Janson’s] work. We had a few email exchanges, because he was working on so many things but wanted to make sure I knew he was very committed to completing the project. His mother was very ill at the time, and he made the association between Peter Parker wanting to protect his Aunt May and his own feelings. He brought something really great to that work.” The Wolverine story is illustrated by Jonathan Marks.

A plunge into comic books might be unexpected from a man who spent 1970 to 1986 teaching literature at the University of Iowa. Even now Morrell lectures on literature, as he did earlier this month when he discussed Ernest Hemingway as part of the Renesan Institute for Lifelong Learning series at St. John’s Church in Santa Fe. His last novel, Murder as a Fine Art, features Thomas De Quincey, author of Confessions of an English Opium-Eater, unraveling a bloody tableau to link killings separated by some 40 years. Part murder mystery, part historical novel, this first book of a projected trilogy embodies Morrell’s embrace of both low and high art. Asked if this paradox goes back to his first writing inspiration, Stirling Silliphant and his scripts for the 1960s TV series Route 66, Morrell said, “I never imitated Stirling’s dialogue. He could be very poetic. But there would often be these long bits of dialogue [in Route 66] that were almost like philosophical discourses. And that’s always made me wonder: Is there a way to have books with this intense action that also have equally intense ideas? Ask a reader five years after they’ve read a book and they’ll say that they were carried along by the plot. But there were all these other ideas embedded there as well.” As for the question of high and low art or if working in comics might hurt the reputation he’s made over the years as the thinking reader’s adventure-thriller writer, Morrell said it’s not really an issue. “It’s the storytelling that’s most important to me, whether it’s a novel or a screenplay or a comic. It’s all about telling a good story.” ◀