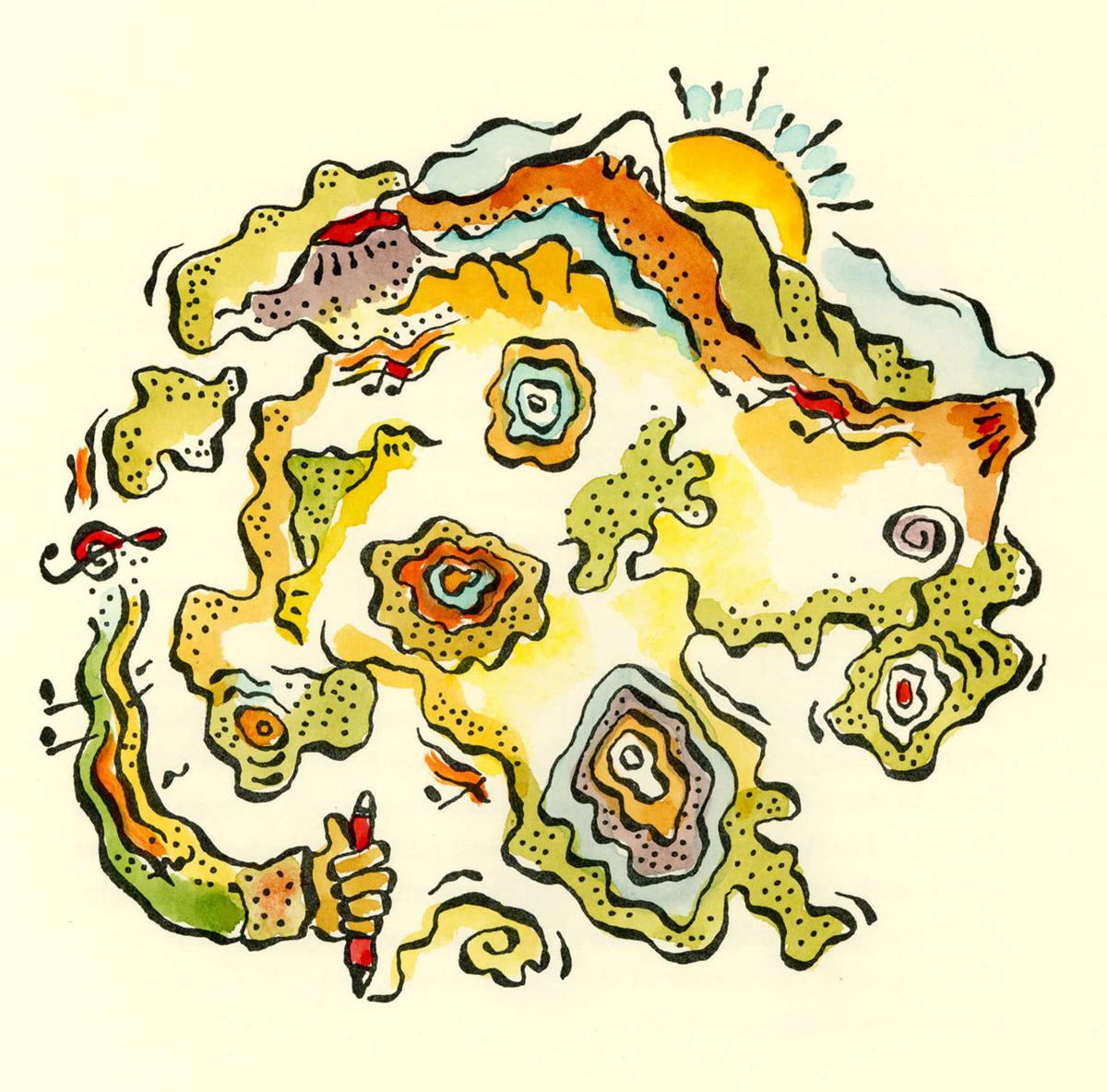 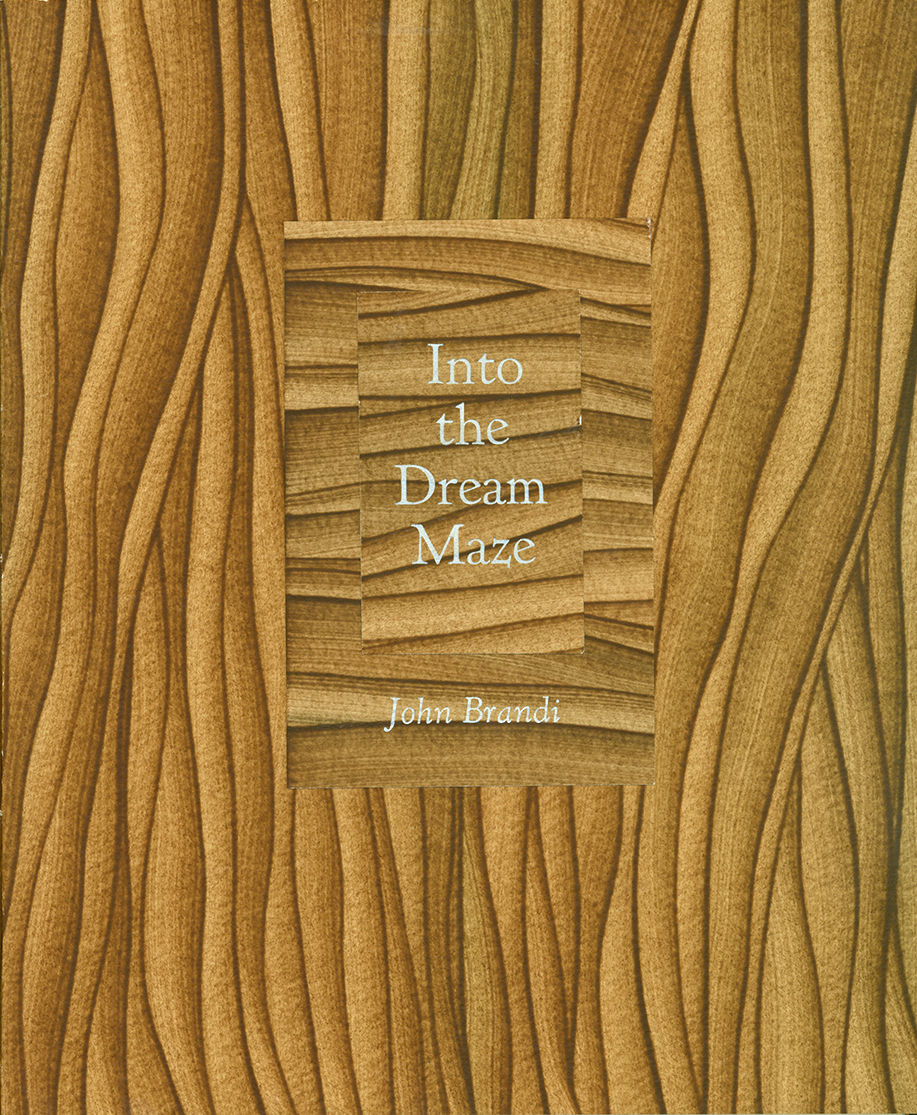 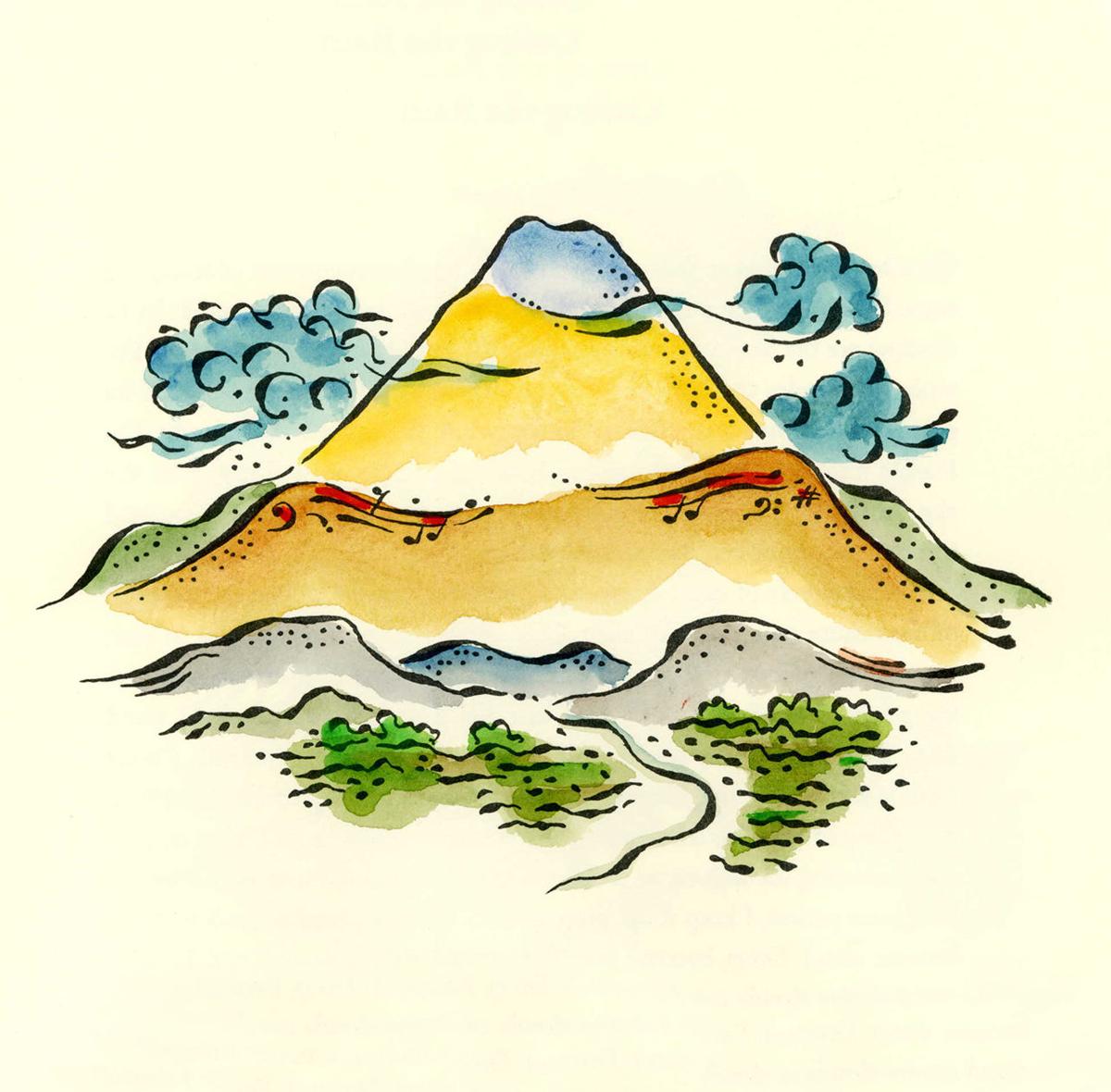 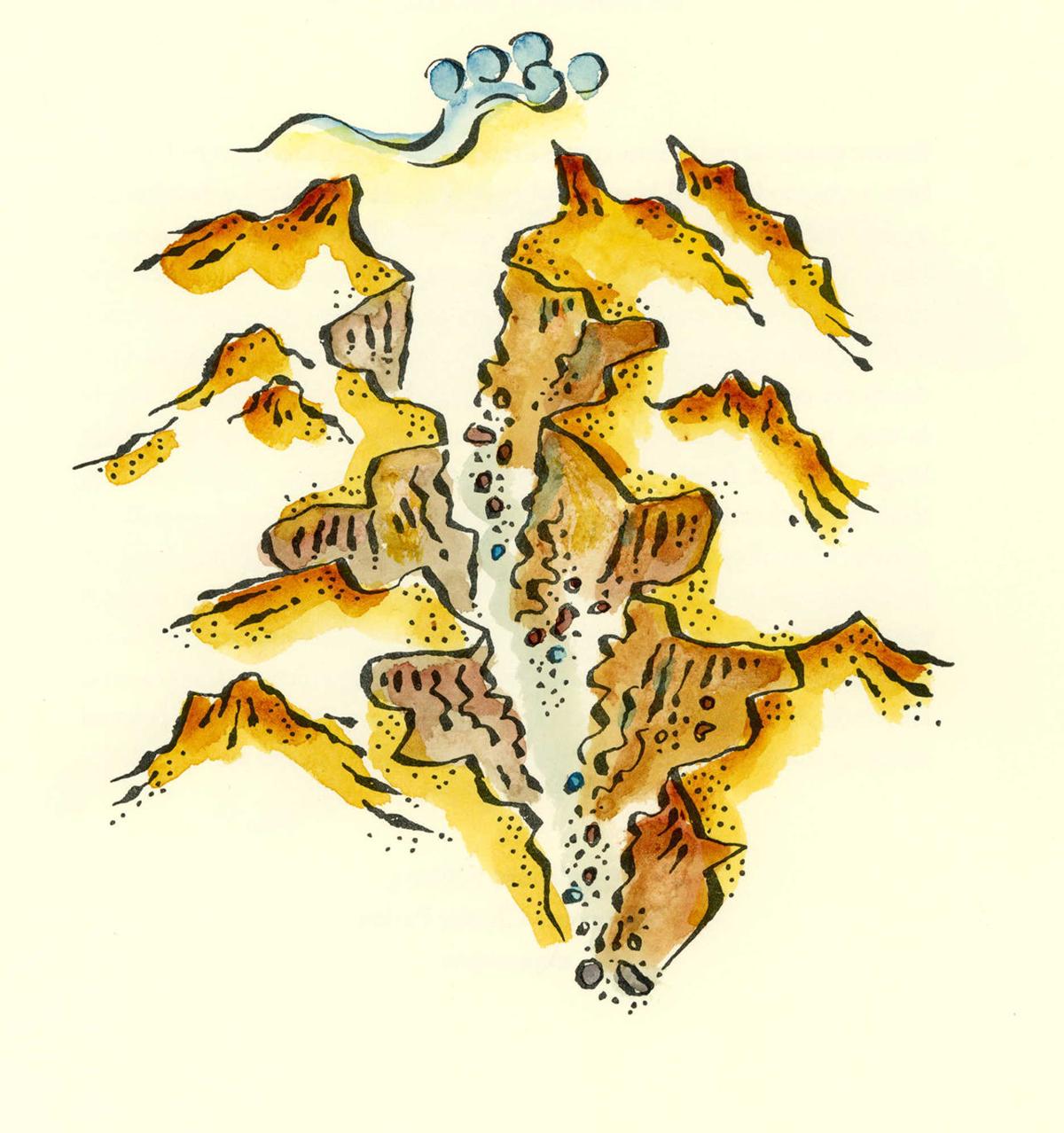 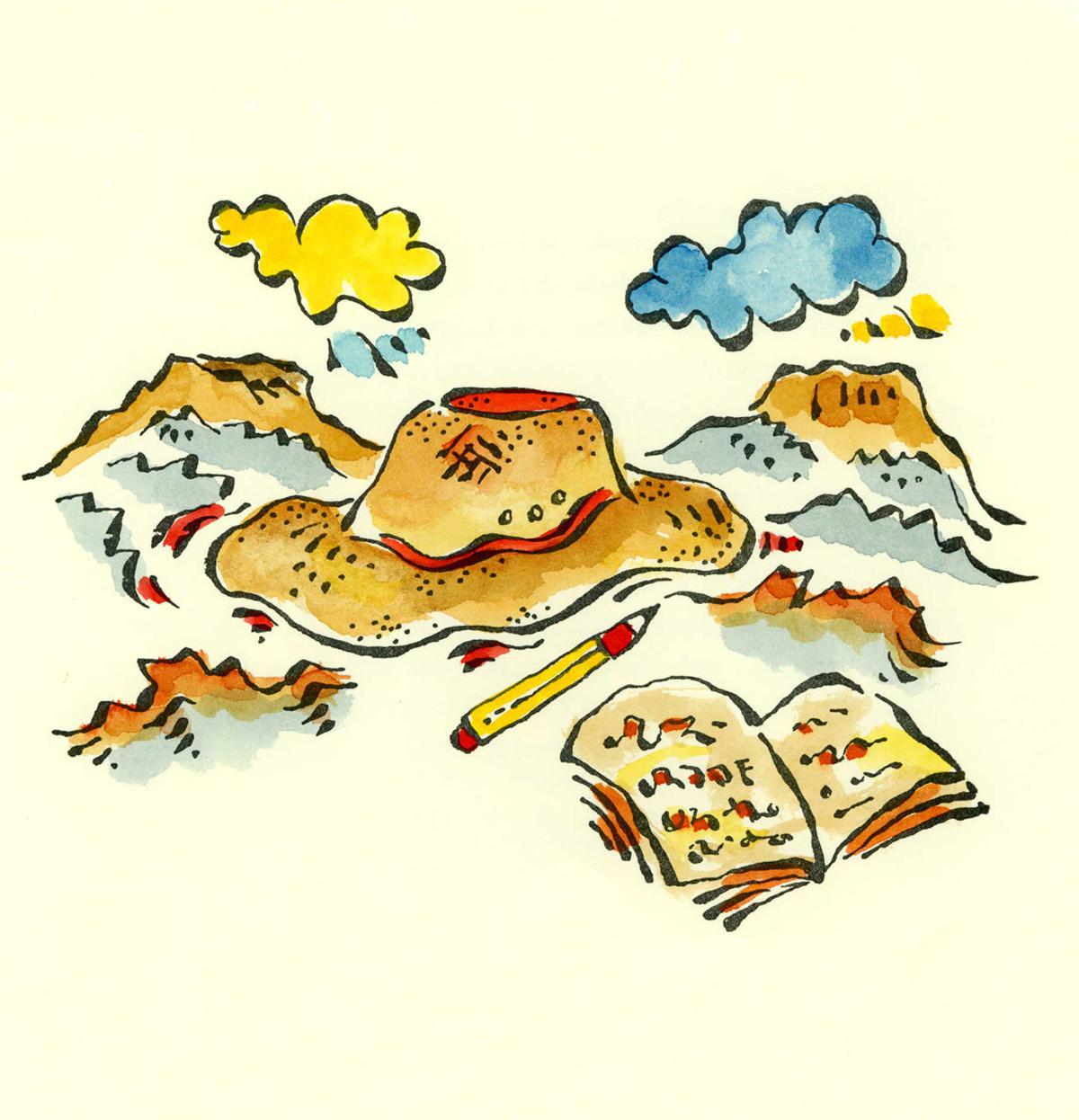 “The desert has to call you into it. You cannot easily make it your own. If I pick apart the reasons for loading up an old pickup and moving to New Mexico forty-five years ago, logical ones like wanting to live where the air is bright and the space wide open, my mind strays,” John Brandi writes in the title poem of his new book, Into the Dream Maze, published in a limited edition in December 2015 by the Press at the Palace of the Governors. Just 35 copies were printed on a letterpress and then Brandi, who is also a painter, hand-colored his own simple black-and-white illustrations.

Brandi writes about the natural world with insight and respect. He offers more than a recitation of places he’s been or a call to honor the environment: He connects the reader to the exterior and interior aspects of his active experience as witness to nature. He puts no distance between reader and subject matter, so you are not just reading about the crickets he heard chirping and the frogs that answered back — you are listening with him. The writing is honed and compressed, revised numerous times aloud. “You can’t revise silently. The eye will miss what the ear will hear as a mistake,” Brandi told Pasatiempo. “If there was anything that brought the music down or caused it to sag, it had to be eliminated.”

The landscapes about which he writes are rendered with such intimate familiarity it’s as though both the words and the scenery they describe spring from the same place inside of him. “A cliff edge rises before me, breathes with electrons, ebbs with tidal waltz. What’s solid isn’t stone, only a severed window of sky where we find hold. The body is brittle air, sunlight, and blood. The universe a fragile empire dissolved on the tongue, a petroglyph carved in mineral-varnished stone,” he writes in “Wijiji,” about the ancestral Puebloan great house and archeological site in Chaco Canyon. It’s a poem the press’s curator, Tom Leech, pointed to when telling Pasatiempo about the typesetting and printing process of Into the Dream Maze. Placing all those lower-case i’s and j’s in a row and making it pleasing to the eye took some finesse, and plenty of discussion with the typesetter, J.B. Bryan of Albuquerque. “I’ve never printed something like that,” Leech said, appreciative of the challenge.

The press, also known as the Palace Print Shop and Bindery, is located off the courtyard at the Palace of the Governors. The press prints several poetry broadsides and keepsakes each year, but it doesn’t commit to many full-length books because the working print shop is also a living history exhibit. People wander in and out all day, and talking to museum visitors about the history of literature and printing in New Mexico is a priority for the curator. Leech is in charge of choosing book projects that fit the press’s mission, which is to preserve the literary heritage of New Mexico. He takes such great care with the entire process that each project can take up to five years from start to finish.

“You can’t unprint a book,” he said. “I don’t want to send things out into the world that are full of mistakes. We do take our time.” When writers come asking about the possibility of publishing a book with the press, he admits, his first answer is usually no. “I took this on because John is such a good writer,” he said. Despite the book’s $400 price tag, all copies of Into the Dream Maze were snapped up within a month by collectors, museums, and universities. The foreword is written by author John Nichols, and each book is a work of art, with exquisite typesetting, handmade endpapers, and excruciating attention to detail. The process was a collaboration between several artisans overseen by Leech. To celebrate the publication — and subsequent popularity — of Brandi’s book, the poet reads from his manuscript on Sunday, Jan. 31, at the New Mexico History Museum.

Even before he could write, Brandi was recording impressions of his travels in nature at the behest of his parents. From the time he was very young, they took him on road trips to natural sites all over California, where he grew up. His father, an accountant for the Los Angeles Examiner, brought home sheets of unused newsprint from the printing presses, and whenever they would return from a trip — to the Mojave Desert, Malibu, Catalina Island, Yosemite National Park, or the Sierra Nevada Mountains, among many other destinations — his father would tell him to draw a picture of something he remembered about their time away. “It could be walking around the giant sequoia, looking at a tide pool, or collecting rocks in the desert,” Brandi recalled. His mother taught him to read and write before he started school, and once he had that skill down, she asked him to add a few sentences of description to his drawings. He returned to this approach as a volunteer with the Peace Corps in the 1960s, inspired by Matsuo Basho’s 17th-century haibuns, in which a tightly wrought prose paragraph is followed by a haiku. These appear in Basho’s The Narrow Road to the Deep North and Other Travel Sketches, which were first published in English around the same time he was setting off for two years in the Andes.

“The book awakened me to the idea that this could be a literary journey, too. My surroundings could inform my poetry. It wasn’t primarily why I was there, but it was happening, and I had a new form to write in,” he said. “I didn’t have to imitate Basho, but I could imitate the form and get back to that time in my life when my parents showed me how to walk in nature and record the things that stood out.”

Each of the 15 poems in Into the Dream Maze is in the Japanese haibun form. In the poem “Borrowed Scenery,” he adapts the Japanese design concept of working what is far away into what is near, such as composing two trees in a garden around a view of a distant mountain, to convey the sense of a never-ending field of vision in New Mexico. In Brandi’s version, wild grasses, primrose, and vine-wrapped posts frame the ancient Tewa village known as Sapawe: Pink-Below-Place. “The garden steps slowly up to those ragged hills — buffalo gourd, chamisa, saltbush merging with prickly-pear and piñon on their slopes. In turn, the slopes, bright with Indian paintbrush and flowering cholla, step down into the fields, through the gate, up to the purple penstemon at my feet,” he writes.

Brandi has published more than a dozen books with small presses since the 1960s. He has also operated his own press, Tooth of Time Books. Though he has studied and written extensively in the haiku and haibun forms, Brandi doesn’t consider himself primarily a haiku poet. He prefers to let the experience he’s writing about determine his form. When talking about his life with Pasatiempo, he referred to it in time-bound sections. His first 10 years in New Mexico, he lived with his first wife and two children in a little cabin without electricity in a canyon in Mora. “It was pretty difficult on the kids,” he said. His income came from teaching poetry in the schools, and residencies and lectures around the state, which often required him to be away from home for weeks or months at a time. Eventually, after he and his wife divorced, he moved to Corrales, where he stayed for 15 years. He married poet Renée Gregorio during that time. She had lived north of Taos earlier in her life, and “We were both pining for Northern New Mexico, so we moved to El Rito in 2000, or maybe it was 2001,” he said.

He’s been coming into Santa Fe regularly to visit Leech at the Palace Press and to work with a translator in the Airport Road area on a new project of Masaoka Shiki’s haiku poetry. “It’s really busy over there,” he said, sounding impressed by, if somewhat suspicious of, the city’s sprawl. He adds that though he sometimes longs for the California coastline he came from, and visits it regularly, he knows he can never give up his rural high-desert lifestyle. “I’m too used to the open space, the sky, the changing weather.” ◀

▼ John Brandi reads from Into the Dream Maze