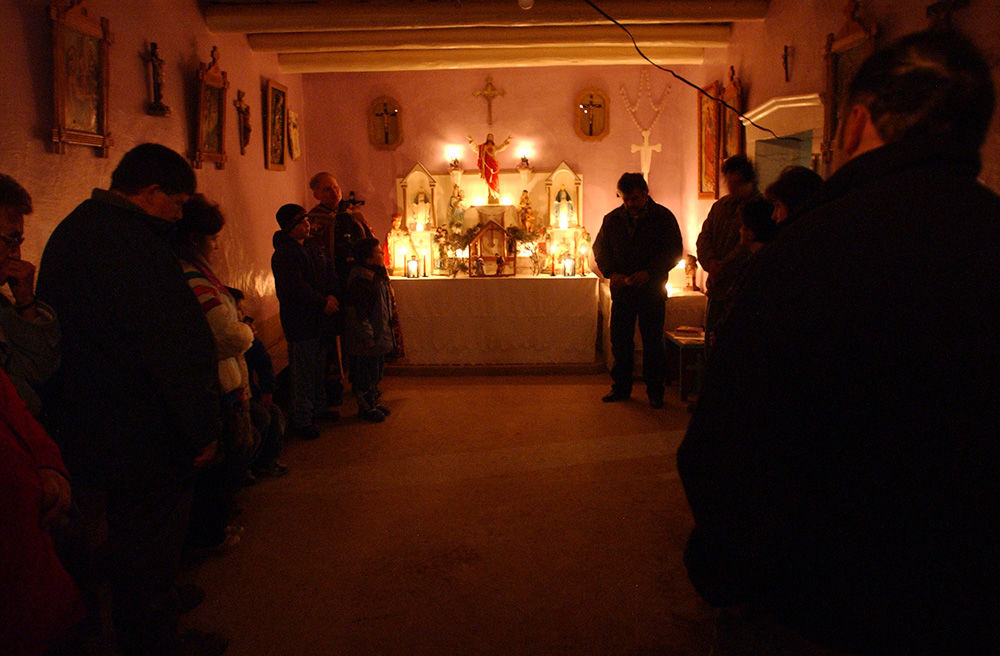 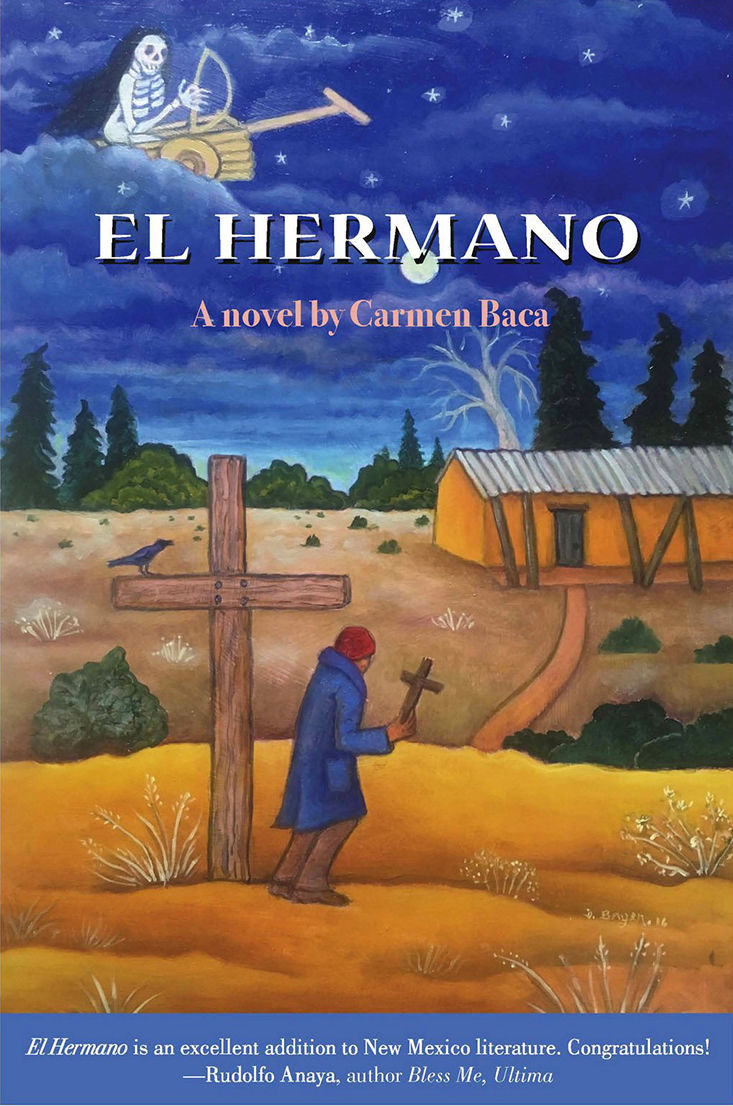 Over the past century, the visual poetics of the lay New Mexican Catholic religious order Los Hermanos Penitentes have captured the imaginations of countless writers and photographers. The lay confraternity has become known all over the world for their private self-flagellation rituals, passionate Eastertime re-enactments of Christ’s crucifixion, and the stark architecture of their moradas. But the Penitentes are a culture that is studied more than it is actually understood.

With the recent release of her novel, El Hermano (Western Edge Press), Northern New Mexico writer Carmen Baca hopes to humanize the men of the lay religious order as everyday people who relish their roles as fathers, cousins, and brothers outside their spiritual yearnings. The group’s origins are rooted in the culture of early 19th-century New Mexico. Lacking access to a priest or a formal diocese because of their remote locales, the Catholic men of these rural communities met in moradas — religious spaces that resembled but were not considered formal Catholic churches — to worship and perform community work as a mutual aid society.

“Los Hermanos’ culture exists in Northern New Mexico much as it did in the early 1900s. They still pray together, induct new members, meet regularly, and attend to the needs of their communities,” said Baca, who reads from El Hermano on Monday, July 24,at Collected Works Bookstore. Her novel adopts the first-person narrator voice of José, a teenager growing up during the late 1920s in Cañoncito, a tiny village located off a dirt road some 15 miles north of Las Vegas. While New Mexico has a few rural locales known as Cañoncito, this may be the most remote. “I doubt you’ll find it on the net, as it’s a rural community with only about a hundred people spread along an isolated 10-mile stretch of road between Manuelitas and Pendaries Village near Rociada,” Baca said. The character of José is essentially a fictionalized version of her father, who grew up in the same town during the same era in which the book is set. It’s the same place in which she was raised, where she lives to this day.

José’s father is the Hermano Mayor de la Cofradía de los Hermanos del Sagrado Corazón, a group that is initiating José’s older brother. José is consumed by wonder and longing to join the order, despite being too young. Goaded by his cousins, he makes furtive attempts to spy on the highly secret initiation ceremonies of his older brother. By stepping beyond his bounds, what he ends up with instead is an encounter with death and the supernatural that will reshape how he views both his religion and his family.

“Through the eyes of José,” Baca writes in the book’s introduction, “I provide a glimpse of what it was like to actually become an Hermano and offer a first person viewpoint of what it was like to live and worship with them: the elders of my past who commanded such respect from their community.” Unlike José, Baca says she never had either the courage or recklessness to spy on the religious ceremonies of her father or older brother. “José’s voice is my voice. Because of my father’s commitment to Los Hermanos and to his own role as Hermano Mayor, and because of my mother’s religious influence, I was raised to follow all Catholic conventions and teachings,” Baca said. “I was the type of child who did as they said.”

Though the book is technically fiction, the landscape of El Hermano is pulled directly from Baca’s upbringing in the rural Northern New Mexico community that looks much today as it did during the 1920s era depicted in her novel. “Almost all of the boys’ adventures in the woods, their meeting places — the rock ledges, the caves, and the arbolera — were where my cousins and I played when we were children,” Baca said. “The boys’ little exploits — taking off with their dogs for hours in the monte behind our house, playing baseball on top of the ladera — these were what we did whenever we were together.” During her childhood, she was surrounded by male relatives of her own age group — a social atmosphere that only intensified her desire to join the all-male religious order. “Most of my cousins around my age were male; and since I was an only child, I became a tomboy to compensate,” Baca said. “I think this may have contributed to my desire to become an Hermano — I felt more boy than girl when I was at the ranch. I was the one who helped my father and my tío with the farm work because there was no one else.”

Baca began writing El Hermano not long after her father’s death in 1986. She completed the novel in the early 1990s while working as an English teacher at West Las Vegas High School, a position she retired from three years ago. After being rejected by four publishers, she put a hard copy of her manuscript in a drawer, where it languished for another couple decades. “Even my former students from those decades remind me now how I used to talk about publishing it one day. So after I retired from 36 years in the classroom in 2014, I told myself it was now or never,” Baca said. “I had a couple of hard copies so I retyped the entire manuscript on my iPad with a refurbished $30 Bluetooth keyboard, inserting more memories and details I’d forgotten, edited it myself, and polished my original query.” This time around, she sent it to four publishers, all of whom wanted to acquire the manuscript. She settled on the locally based Western Edge Press.

Despite the novel’s setting in an era nearly a century removed, Baca still believes the story is relevant. Baca says interest in Los Hermanos is having a resurgence among local rural men in their twenties. But even if it wasn’t, the novel’s remote New Mexico setting remains her everyday life.

“There’s a scene in my book which actually happened to me: José and his father are walking from Las Cañadas when his father says, ‘Todo lo que vez es para ti y tu hermano.’ [‘Everything you see here is for you and your brother.’] Well, in my case, my father waved his arm over the land before us and said, ‘Todo lo que vez es para ti,’ ” Baca said. “I was perhaps twelve or so then, but from that moment on, I’ve never forgotten that the land of his own forefathers now belongs to me, and my husband and sons. My husband built from the ground up our house, which he erected on the very same spot where José built Carmen their two-room abode in 1938. I’m tied to this land, just as José was.”  ◀

Los Hermanos' culture exists in Northern New Mexico much as it did in the early 1900s. They still pray together, induct new members, meet regularly, and attend to the needs of their communities. — author Carmen Baca