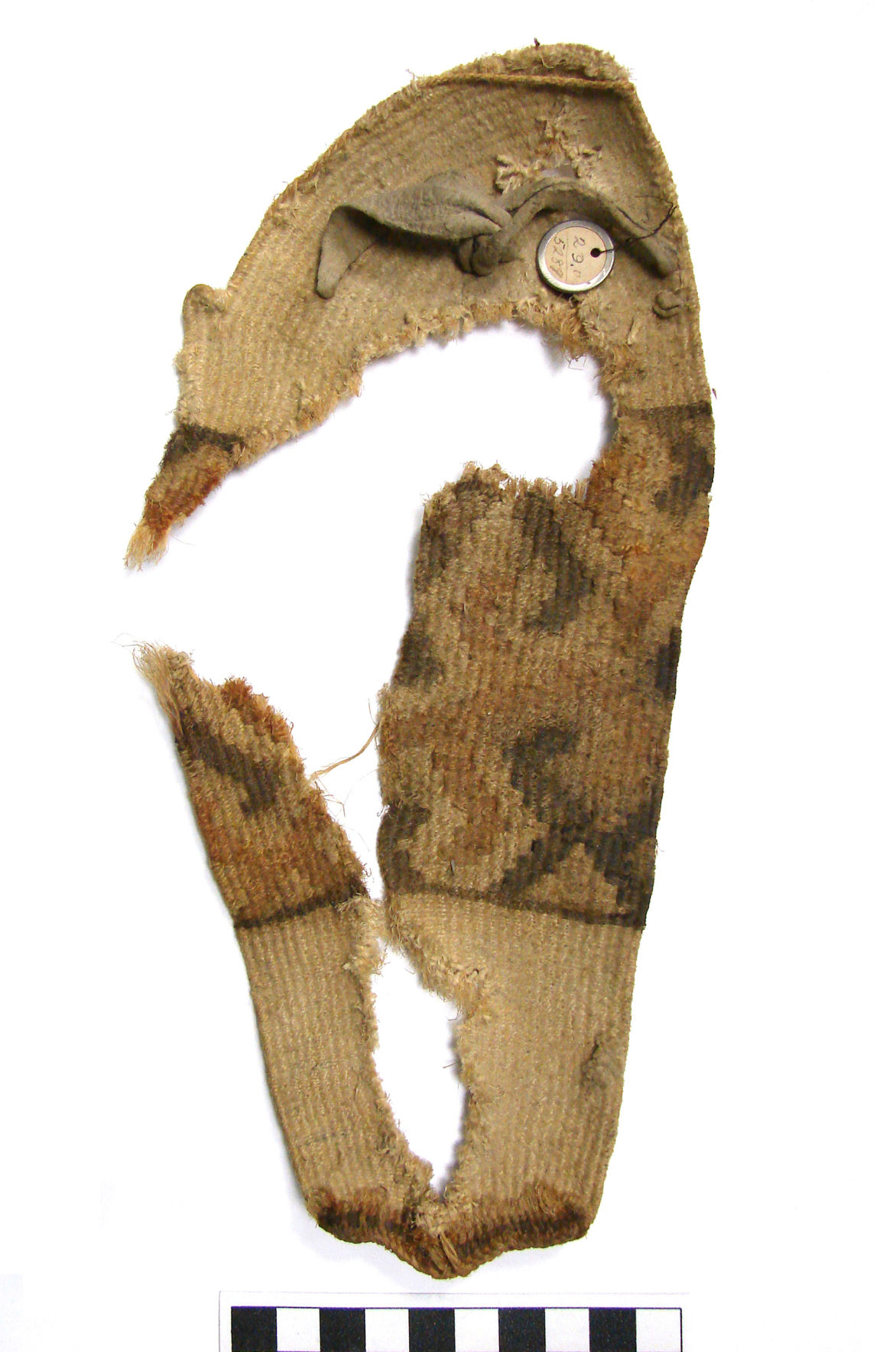 A yucca twined sandal recovered from the West Ruin of Aztec 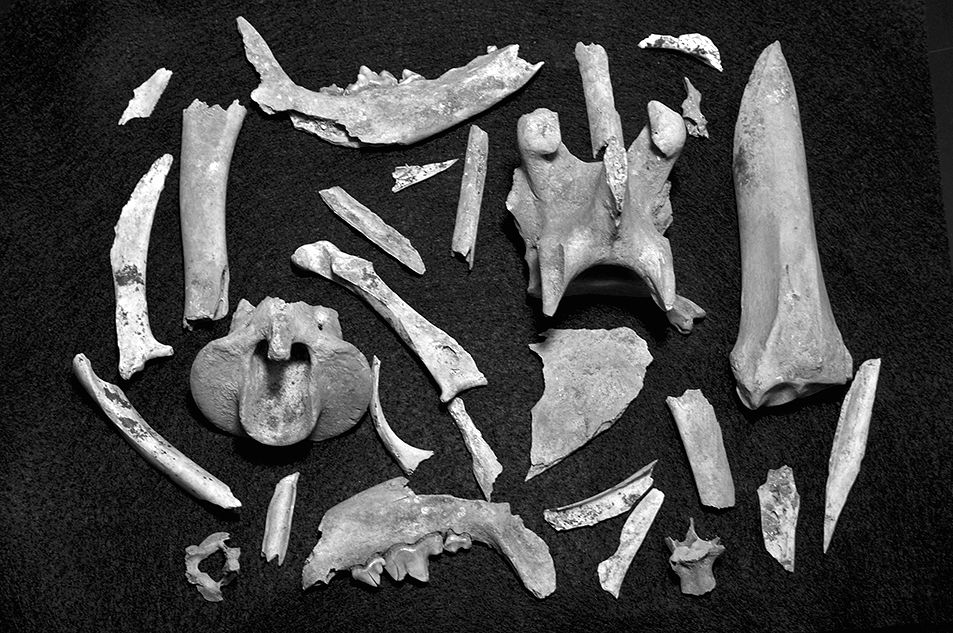 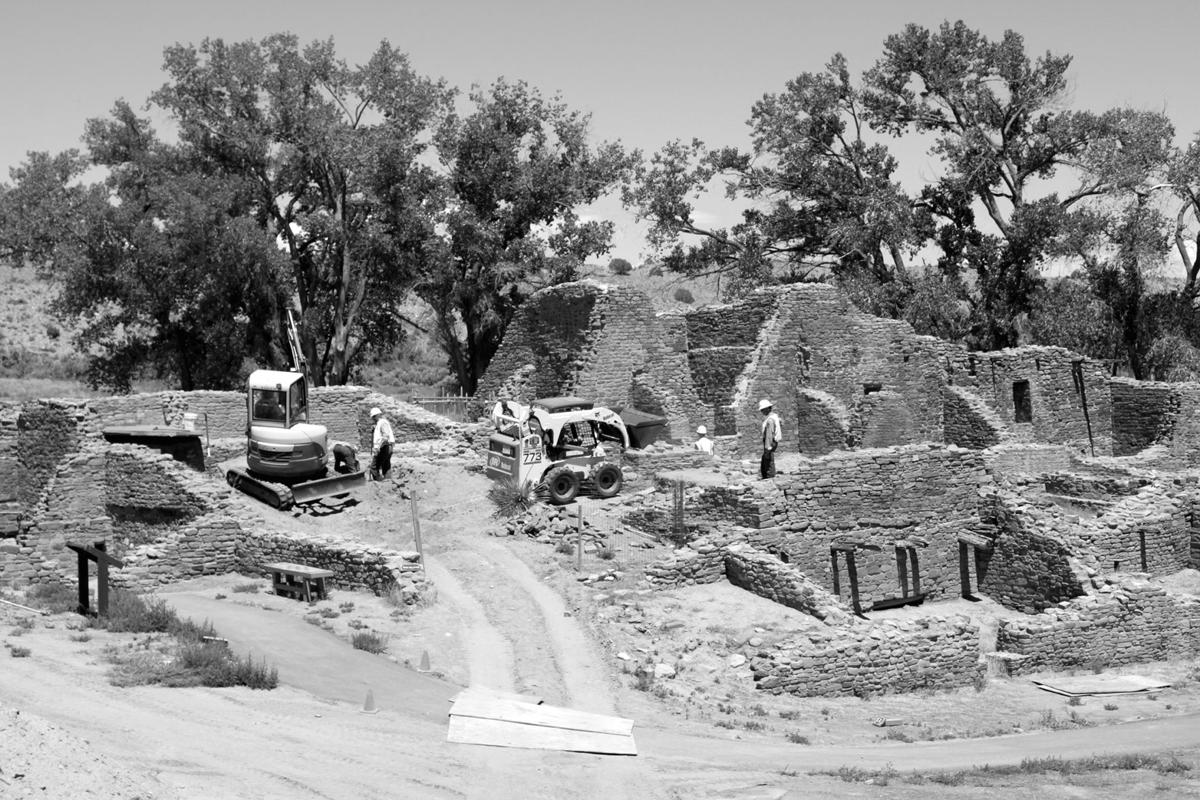 Excavations by the National Park Service in the western portion of the great house at Aztec West, 2010 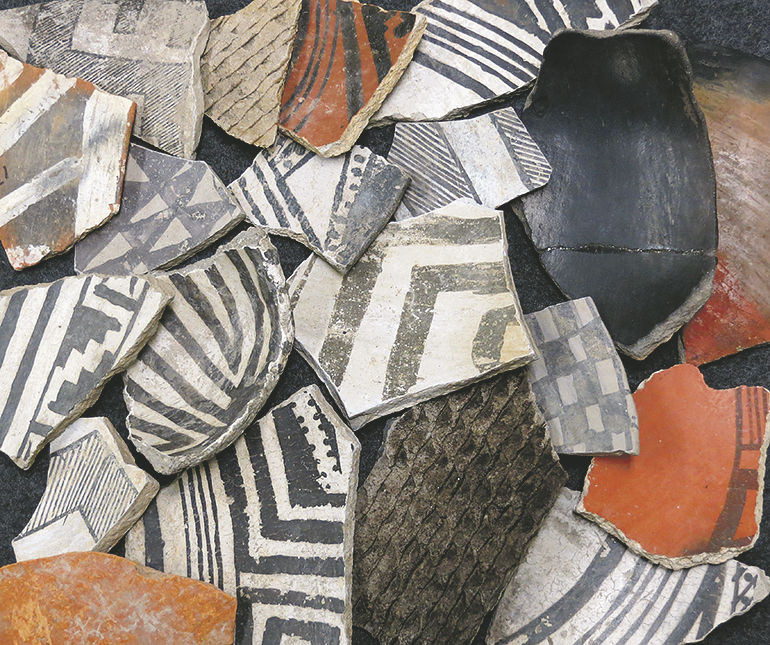 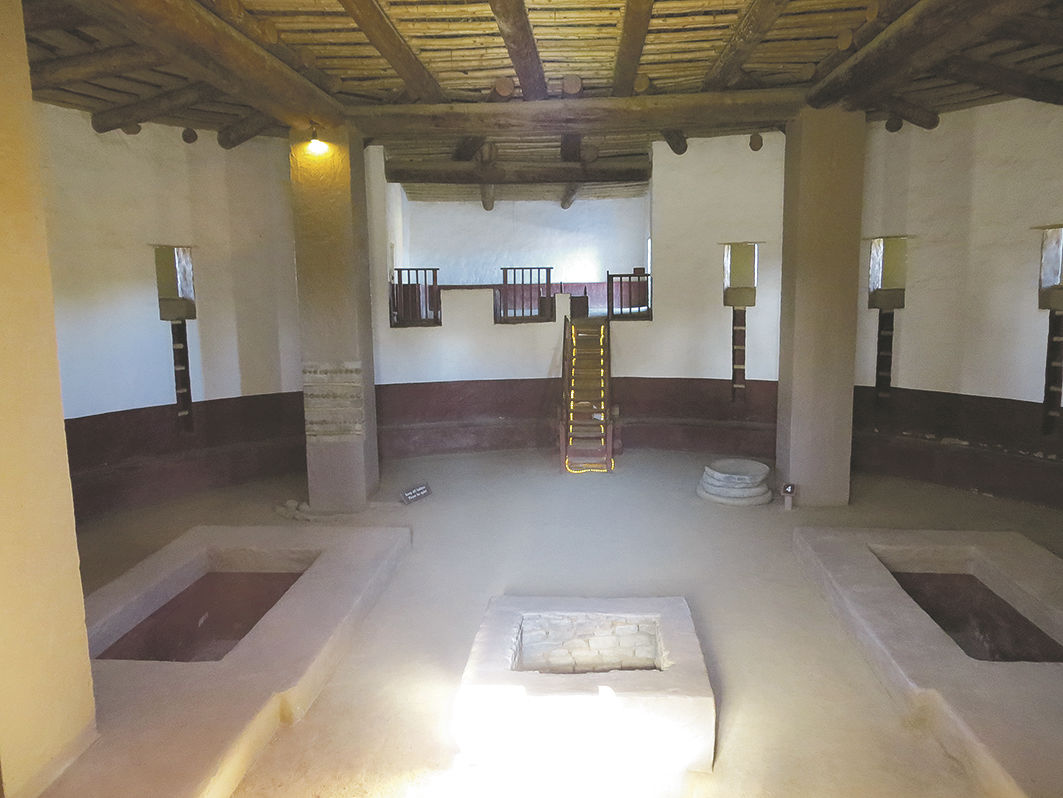 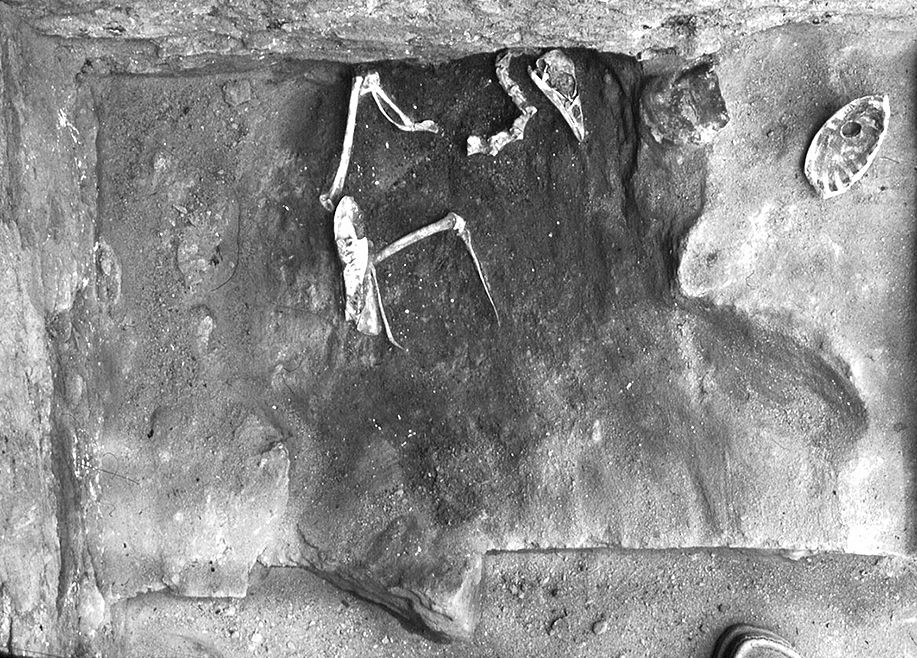 Many turkeys were eaten and their bones were thrown away, some received formal burials at sites across the Southwest

Cotton diamond-twill fabric from the West Ruin of Aztec

A yucca twined sandal recovered from the West Ruin of Aztec

Excavations by the National Park Service in the western portion of the great house at Aztec West, 2010

Many turkeys were eaten and their bones were thrown away, some received formal burials at sites across the Southwest

Cotton diamond-twill fabric from the West Ruin of Aztec

The humble but proud corn plant plays a huge part in the story of the Ancestral Puebloans. The people who lived 800 years ago in what is now northwestern New Mexico had a varied menu that included venison and rabbit, beans, squash, piñon nuts, wild onions, yucca fruit, tansy mustard, and purslane, but corn was a critical staple food. “I just read a paper that suggested that the selection of different colors in the so-called Indian corn started in the 700s,” archaeologist Paul F. Reed said. “The selection was both for decorative purposes and the food quality. The flint or popcorn varieties probably preserved a little better, but the larger ones were great for grinding into cornmeal.”

The people may have learned to hybridize corn varieties. “Corn came up from Mexico 7,000 years ago, and it went through lots of shifts. I think once the Puebloans got hold of the flour types, they realized it was really the way to feed a lot of people, and I think that’s the reason they zeroed in on that for a good portion of their corn crop,” said Reed, co-editor of Aztec, Salmon, and the Puebloan Heartland of the Middle San Juan, recently published by the School for Advanced Research’s SAR Press.

In the book, Reed and 10 other contributors examine the pueblos that were developed 50 miles north of the renowned Chaco Canyon, starting in the late 11th century, when Chaco was nearly two centuries old. The Salmon and Aztec settlements, the authors write, were built by waves of migrants from Chaco, although they were not the first ones in that area. “Judging from excavations, there were hints of earlier things below where Salmon was built, but not a pueblo of that size,” Reed said. “It’s hard to know what underlies a lot of these Chaco great houses because they’re monuments. Nobody’s proposing that we knock them to the ground just because there might be an earlier pueblo underneath.”

The great house was a signature Chacoan feature and made up of expertly fashioned masonry buildings more than two stories tall and associated round ceremonial kiva structures. The term “Chacoan” refers not only to architecture and textiles having distinctive characteristics but also to particular traditions and the way of life of the people who built and inhabited Chaco.

Chacoan society is thought to have ended in about 1150. The post-Chacoan population of Puebloans abandoned the Middle San Juan by 1300, but in the 12th and 13th centuries, it was a busy place. Salmon Pueblo and the larger Aztec site were begun in about 1090 and 1100, respectively. Salmon Pueblo had a 300-room great house, while the Aztec Pueblo ultimately had three great houses. Most of our knowledge about them comes from excavations made by archaeologists Earl Morris between 1916 and 1921 and Cynthia Irwin-Williams from 1970 to 1979.

Many mysteries remain. One is why the Puebloans built Salmon Pueblo dangerously close to the San Juan River. It is believed they migrated during drought times when the river was low, but surely they knew about such things. “They really became expert at managing the water in Chaco, where they had tremendous quantities of water at certain times and very little at other times,” Reed said. “It is an interesting conundrum, for sure. And if you look at the spacing of Salmon to the San Juan and of Aztec to the Animas River a few years later, there were definitely some lessons learned. They doubled the distance to the river.”

Besides the big pueblos of Salmon and Aztec, the old ones, as Chacoans are called, built smaller great-house communities in the La Plata River Valley about 10 miles to the west. Reed said it was an eminently friendly landscape, which is also told by an archaeological record that stretches all the way back to the late 500s. “The La Plata River was either a good-size creek or a small river and was pretty consistent and perfectly suited for the types of water management that the pueblos evolved.

“If we start with the 600s in the Basketmaker III period, this is when people across the northern Southwest started farming in a huge way, and they loved those little alluvial valleys, sort of a prime heartland — as in the title of our book — and I think the populations just continued to grow and grow,” Reed said. “Chacoan expansion in that valley took a real different course because you had long-established communities. At Salmon and Aztec, you had a cleaner canvas in place where 300 or 400 people could build a big pueblo. In La Plata, I think all the best lands were spoken for much earlier.”

Another of that heartland’s mysteries has to do with fish bones, specifically the lack thereof at the Middle San Juan sites — even though the communities were adjacent to rivers. “Perhaps there was a cultural taboo against eating this plentiful source of protein,” Kathy Roler Durand and Ethan Ortega write in a chapter about the Puebloan diet. Their other proposal, that there was “a lack of fishing technology” in the region, seems unlikely when the people were so good at harvesting and using everything else in the environment. “It is hard to know what’s going on with the fish bones,” said Durand, professor emerita of anthropology at Eastern New Mexico University and an expert on bones found at such sites. “They might not have preserved as well,” she said, adding that relatively small fish bones may have fallen through the quarter-inch screens that archaeologists use to screen dirt for artifacts.

Scientists studying the region believe they have evidence showing a decline in the numbers of large game species during the period covered by the book, from 1050 to 1300. Why didn’t the people try to be more conservative in their hunting? “I suppose the sociological phenomenon called the ‘tragedy of the commons’ may have played a role,” Durand said. “This was a common resource that everyone was extracting and people were focused on maximizing their own return rather than thinking of the long-term outcome for the entire community or region.”

Whatever the reason, it is likely that the decline was one reason why the later residents took to raising turkeys. Durand has seen healed wing and leg bones, which meant that in spite of the greater disease danger, the birds were kept, both for meat and feathers. The people wove turkey feathers into warm blankets and other garments and probably used them ceremonially. Durand stressed that religious and everyday matters were blended in those times at Salmon and Aztec. “The same turkey that would be eaten would be used for blankets, and certain feathers would be used for ritual purposes, for prayer sticks, or the feathers themselves used as offerings in the landscape.”

Archaeologists spend much of their time excavating, recording, and writing reports, but the final step is also important: trying to piece together the stories of people’s lives from centuries-old traces. “I was really excited to work on this book project because it was telling the story about archaeological materials to more of a lay audience and that’s the direction I would like to go in my retirement,” Durand said. “SAR actually had an editor come work with us to understand how to phrase things.”

Aztec, Salmon, and the Puebloan Heartland of the Middle San Juan is the latest in the Popular Archaeology series from SAR Press. As an aid for the book’s contributors, who are used to writing technical papers for their peers, the School for Advanced Research held a writing workshop at San Juan College. Jane Kepp, who was the SAR Press director from 1981 to 1993, led the session.

Durand said the workshop helped her describe ancient hunting technologies, for example. The people in the Middle San Juan used spears, arrows, throwing sticks, and, for species that bolt when they’re in danger — pronghorn, bighorn sheep, and jackrabbits — they used plant-fiber nets.

Her job analyzing the bone record is confused by what’s known as the “schlepp effect.” Puebloan trash sites are not reliable indicators of diet because many of the large-animal bones were left at the kill site. “You field-butchered a deer in order to reduce the load as much as possible, then you carried out just the most valuable parts,” she said. “The other thing they would take is the limb bones, which are very strong and were used to make bone tools like awls.”

But making allowances for small fish bones and anti-schlepping habits, the researcher into the bone record endeavors to figure out why the civilizations in the Four Corners region increased, declined, and ultimately migrated out of the area, by looking at what they ate and how much of it there was. “That is one piece of the puzzle,” Durand said. “I think that by looking at bones, we can see when there has been human impact on the environment that has been detrimental to human residents, which is actually similar to what we’re seeing today.” ◀

Aztec, Salmon, and the Puebloan Heartland of the Middle San Juan, edited by Paul F. Reed and Gary M. Brown, is part of the Popular Archaeology Series published by School for Advanced Research Press and the University of New Mexico Press.