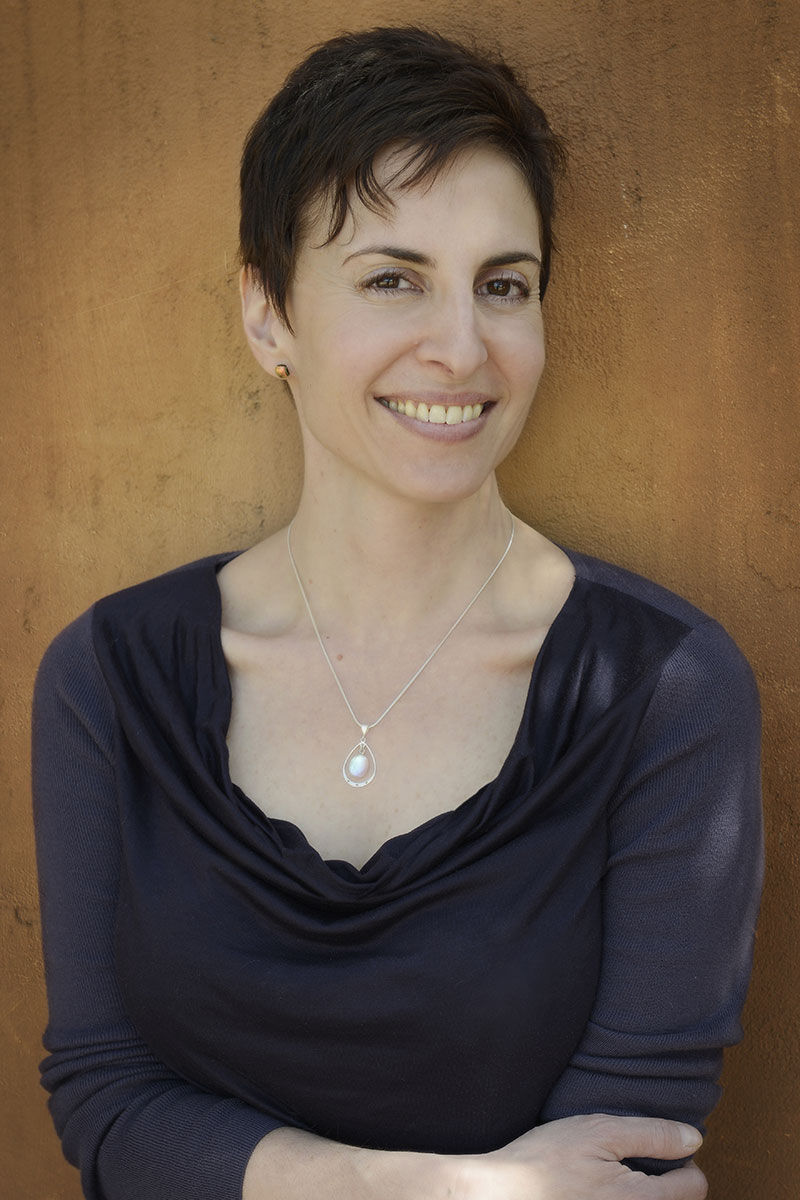 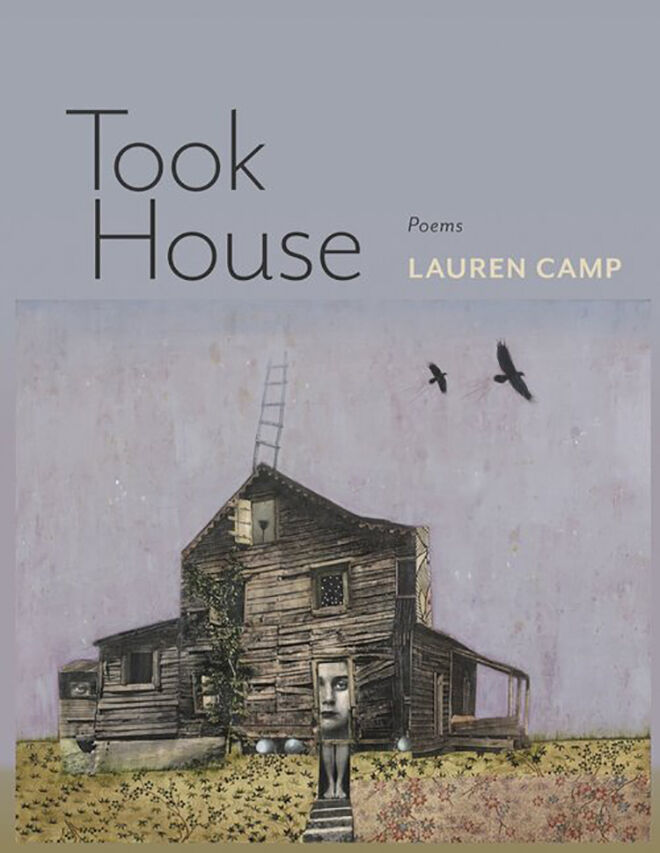 A few lines of poetry came to Lauren Camp as she stood outside at dusk. She doesn’t see well at that time of day, when the light has faded, but it’s not yet completely dark.

“It was fairly still. I was listening to birds fly around, but I couldn’t see them. It wasn’t a magical moment; just a moment where I couldn’t tell what was going on, when the world was moving around,” she says.

Now, that moment is a stanza in “The Night Clouds Wrestled the Sky,” a poem in Camp’s latest collection, Took House published in August by Tupelo Press.

What else should we look at but fugitive color,

the shape that’s not empty?

So little of what happens belongs to us,

only the frequent sense of being encircled.

Camp hopes the poem speaks to you, but she doesn’t expect you to understand — or care — exactly what it’s about or how it came to be. It doesn’t matter, for instance, that she was at the Santa Fe Art Institute that May evening in 2013, on a break from teaching a writing workshop connected to an exhibit called Earth Chronicles Project: New Mexico.

The less backstory, the better. What matters is what “fugitive color” means to you. It’s okay, she says, to struggle with an interpretation. There’s no pressure to emerge with clear answers. Camp wants her poetry to challenge you, and she wants to find that difficulty in what she reads. To her, that’s the fun and purpose of poetry. But if she could impart one thing to those who are put off by such complexity — or by the very existence of an art form made up of purposely inscrutable ideas — it’s that you don’t have to “get” it.

“At five years old, at nine years old, a teacher asked you what a poem was about. You offered something; and the teacher said, ‘No, wrong.’ That’s enough to shut someone down,” Camp says. “I don’t believe poetry has to be that definitive. I can get something from a poem and you can get something different. You can have an opinion on any poem, and that opinion is valid.”

Took House is a narratively oriented book that centers on an all-consuming, dangerous-sounding romantic relationship, but the story isn’t written with a beginning, a middle, and an end. It’s more about the feelings you get when reading the book than a linear sense of time. Camp, 53, started writing the poems in Took House in 2005. Over the next 15 years, she published four other books while she continued to work on it.

Though the story’s elements come from her own experience, Camp is not a confessional poet in the tradition of Sylvia Plath or Anne Sexton. Took House is about a man and a woman, but it doesn’t matter who the man is or that the woman was once her. She writes to find clarity and sometimes to exert a little control over experiences that defy both of these things. Took House was a way to understand her past rather than cling to it.

“It took a long time for me to figure out what parts I even cared about,” she says. “I had all the facts and all the emotions — grief, exhaustion — all of the stuff that goes along with the end of a relationship. But as the months and years wore on, I cared about a whole lot less of it. So, I kept pushing things out [in revision]. And what I cared most about was enhancing the hungers, the appetites, the sounds, and the land. The extremes of the poems.”

Camp was trying to disassemble the common experience of a breakup into something less easily accessible while simultaneously making less graspable portions more concrete. Readers must contend with (or ignore) what she has left out. “How do you do something interesting and hope that the reader can also gather enough sensory and metaphorical elements to put together what they need — more than the exact thing that I need them to have?” she asks, rhetorically.

In addition to poems that often feel fueled by alcohol, passion, and interactions with nature, there are several ekphrastic poems, or poems about works of visual art. Among the artists Camp writes about are Eva Hesse, Donald Judd, and Judy Tuwaletstiwa. These poems aren’t just pretty renderings of other people’s creative expression. They are explications and explorations of Camp’s experience with art that offer readers more than the heartbreak poems could supply on their own.

In “The Bed on the Wall,” she writes of Robert Rauschenberg’s Bed, a mixed media fiber piece from 1955.

So garish: the arc of his interior

so deceptive. The coordinates of this project fall

between sheets and box spring:

the command of horizontal passage.

“Camp’s collection is a walk through a gallery and I appreciate the experience especially right now,” Rebecca Schumejda writes at AlbanyPoets.com. “I appreciate the invitation to gaze upon the images she creates and interpret each piece in a different way. In certain lights, from different angles, these pieces all have legions of ideas that allow the reader to connect in an intimate manner.”

Among Camp’s previous books are Turquoise Door: Finding Mabel Dodge Luhan in New Mexico (3: A Taos Press, 2018) and One Hundred Hungers (Tupelo Press, 2016). She wrote Turquoise Door while spending time in Luhan’s home in Taos, and One Hundred Hungers is about her father’s Iraqi-Jewish identity. He immigrated to the United States as a teenager in 1950 and was notably silent about his childhood when Camp was growing up. Before his death from Alzheimer’s in 2019, Camp became curious about stories she’d never heard.

“I asked him questions, and he didn’t answer. He got angry at me,” she says. “I started writing about it. There was no information to be had — no research options. I found that deeply frustrating but ultimately kind of freeing. I researched my imagination of what his childhood might have been like. He gave me two or three phrases, and I put them in verbatim.”

Camp is a former fiber artist who produced and hosted a radio show, Audio Saucepan, on Santa Fe Public Radio KSFR-FM from 2003 until 2018. She teaches writing workshops for New Mexico Poetry Out Loud, Southwest Literary Center, and Santa Fe Community College, among other organizations. Many of her students are in their late 60s to late 80s, who often come to her wanting to write a memoir. She shows them poetry for inspiration. She doesn’t ask them to like it, just to feel it.

But what is “fugitive color”? Does Camp have a definitive answer?

When I stood and tore rocks

from the front of our porch, you saw I was otherwise

empty of details, of spark. From words to cup

to hope to wake; you called for help.

From the edge of our porch, you saw I was otherwise

caught in the arch of defeat. No chances

to hope to wake. You called for help

that day. October was visible in every direction,

Caught in the arch of defeat. No chances.

How many times could we do this? I almost slid off

that day. October was visible in every direction,

taut then shaking. Was this on your heart?

How many times could we do this? I almost slid off

from the place we called home. Pity the riddle,

taut then shaking. Was this on your heart —

your sturdy going on, your exhaustion

With the place we called home? Pity the riddle,

empty of details, of spark. From words to cup,

your sturdy going on, your exhaustion

when I stood and tore rocks.